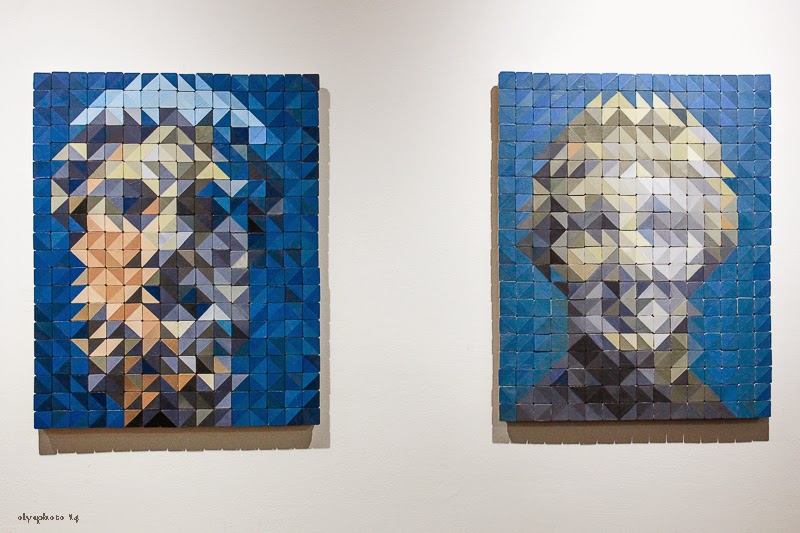 If you go to the Metropolitan Museum and see Rubens' “Venus and Adonis”, you will probably think you are looking at the final effort of the artist. Yet, it turns out that you can only really see what the artist truly intended by looking at the work in a mirror.  It turns out that this painting was the template for a tapestry. Tapestry makers needed mirror images of works to be completed because they used to work from the back of the template forward, running the thread through the image on the back and looping it back through the front. 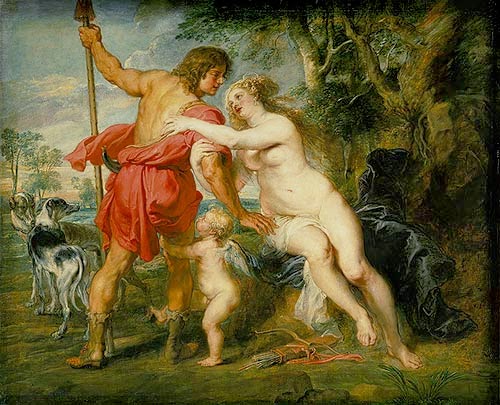 (Rubens V & A - from the Met Museum Collection)

Believe it or not, there has been a long tradition of mirror-image art or art based on distorting the finished image so that it can only be seen through special devices or at special angles.  This is called, in fact, anamorphosis.  Remember the famous painting by Holbein – The Ambassadors?  This might be the most famous example of anamorphosis.  You see a blurry image in front of a clear image of two ambassadors but if you stand at exactly the right angle, you see the blurred image is actually a human skull and now the images of the ambassadors become blurred.  This was, apparently, meant to underscore the fact that our own mortality gave a dream-like quality to life casting much of what we do, or the value of much of what we do, into question. 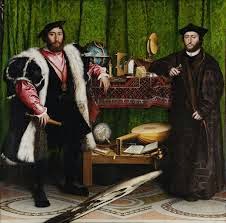 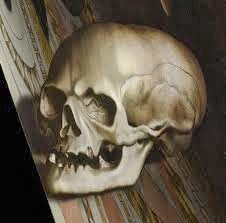 (Holbein's The Ambassadors at the National Gallery, London)

Jamie Martinez has been experimenting with anamorphosis in regard to his ‘triangulism’ paintings. He often takes an image of some meaningful subject – like a tiger, a dancer, a mythological figure – and he breaks the image down into numerous triangles so that the starting image can only be clearly seen through a digital camera.  So the two big questions are: why triangles and why would an artist use anamorphosis? 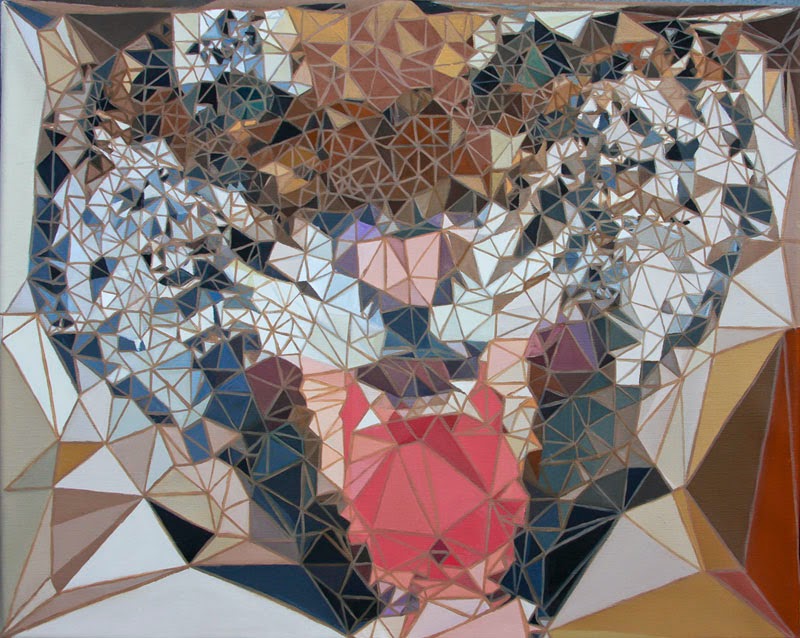 Some folks who are interested in the origins of various symbols believe that the triangle was, basically, originally an abstraction of a mountain.  In ancient times folks felt that mountains were sacred areas – the higher you traveled, the closer to the spirit realm you were.  Pyramids were also abstractions of mountains and the sole purpose of the Egyptian pyramid was to help the pharoah's soul ascend to the after-world.

Yet, in Sumeria, an upward pointed triangle represented something male while a downward pointing triangle represented something female.  When you overlap these two triangles (like in a hexagram or Star of David) you gain a union of masculine and feminine (active and passive in the ancient world) or in the "hermetic” tradition a union of the tangible world which reaches upward and the intangible or spiritual world which reaches downward.  This seems to have been the visual representation of the saying by Hermes Trismegistis: “As above, so below.”

Four versions of triangles also represented the four basic elements of earth, air, fire and water. So triangles are among the most meaningful and oldest symbols. Indeed, triangles are often treated as little allegories which can mean beginning, middle, end or spirit, mind, body.  To break images down into triangles or to form them from triangles is to imply an underlying (symbolic) order or reality to the basic image. 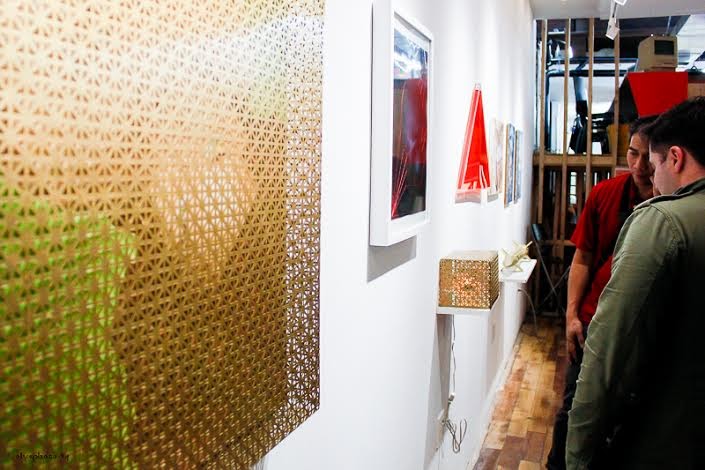 Why resort to anamorphosis?  Well there have been practical and aesthetic reasons.  Andrea Pozzo was once challenged to create the illusion of a dome on a flat ceiling.  He created a ceiling painting whereby if you stand in a certain spot, you really can believe you are looking up at a dome.  After the Battle of Culloden, when hopes for Scottish independence were dashed, distorted images of their erstwhile leader were created and could only be seen through the use of a special instrument only possessed by those who knew what it was for (images of this leader had been destroyed and prohibited by the authorities).  I think the big reason for using anamorphosis, however, is similar to why Holbein used it.   You want to imply there is something underlying something else.  There’s what we see and what we usually wouldn’t see.  But, you might say, a triangle is a symbol, so why use a symbol to distort other symbols?  Well, I’m guessing that’s the point. 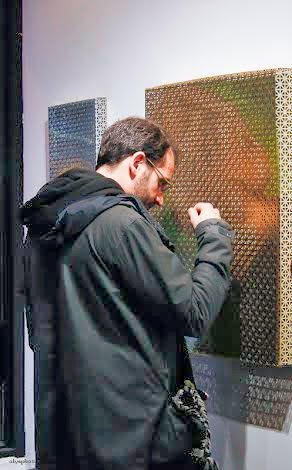 To me Martinez is saying, listen, what’s the whole purpose or point of art?  Art, in reality, serves a higher function than presenting ‘beauty’ or 'entertainment'.  Art is a form of engagement and communication of meaningful stuff that can’t be readily articulated. Indeed, this meaningful stuff is much more meaningful than anything we can say. The triangle might, in fact, be the perfect representation of one of the most, if not the most, meaningful things we can say: "Yes, there is a possibility for an elevation of our human nature."

The triangle represents elevation, it’s also, as I mentioned, an allegory in itself – it can mean beginning, middle, end, or mind, spirit and body among other groupings of three terms.  Perhaps underlying all artistic messages or images, we, basically, have the triangle or what the triangle represents.  Martinez breaks the image down to various triangles and when you look at the piece with the unaided eye, all you see are triangles.  When you use your digital camera to take the image, then the triangles disappear and you get a coherent image.  What does this mean?

At the gallery Martinez held up his smart phone and showed me how one of the pieces looked perfect through the viewer. I think Martinez could also be making a statement about how we are absorbing everything or lots of things which are meaningful through our gadgets. Stuff doesn't make sense any more until we take a digital photo of it and post it on a social media site.

In the process of capturing this image, to share later, you are also transcending the basic triangle shape for a more coherent or beautiful version of, basically, the triangle.  Like the example of the renegade Scottish king, only folks who knew the image was deliberately distorted would bother to ever try to take a look at the image through a special device. Although I have to admit that on a superficial level the images Martinez creates also often appear to be quite attractive.  In his painting of the god Apollo, for instance (that image is way at the top), Martinez has over 300 individually painted triangles comprising that piece and even looking at it without the use of a camera, it is a visually appealing piece. 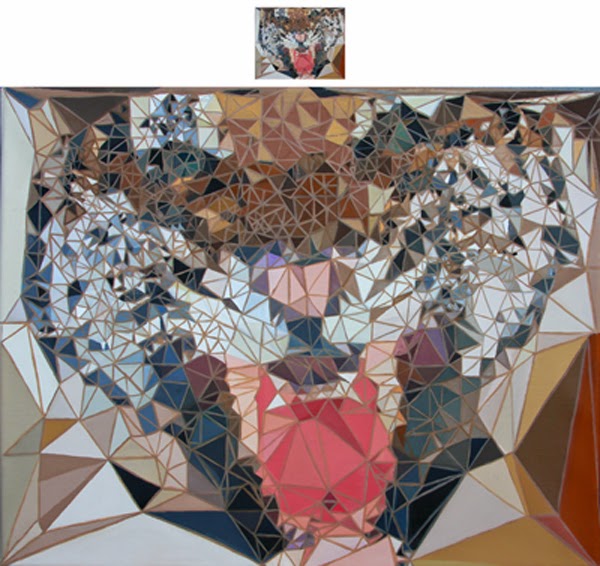 (It's a little hard to see but the top image is what you get when you look through a digital camera.)

In the interests of self-disclosure, and to avoid the perception of a conflict of interests, I do want to point out that I know Jamie.  I discovered his art review website: Arte Fuse and really liked the energy and content. I submitted a couple sample reviews and he, graciously, invited me to submit more.  That being said, I chose to do this review because I went to his recent show at Con Artist Collective and thought there was something really thoughtful behind the pieces.  I have not reviewed any type of anamorphosis art before and I am always looking for something new to write about.
Posted by Daniel Gauss at 12:29 AM