A Minotaur (between meals) by Beth Carter

Here's a minotaur which I saw on display at the Bertrand Delacroix Gallery in Chelsea. 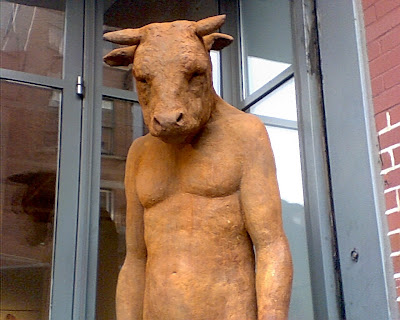 He is a creation of Beth Carter, an English artist represented by the gallery.

What's a minotaur? Here's an account by an ancient author:

"Minos aspired to the throne of Crete, but was rebuffed. He claimed, however, that he had received the sovereignty from the gods, and to prove it he said that whatever he prayed for would come about. So while sacrificing to Poseidon, he prayed for a bull to appear from the depths of the sea, and promised to sacrifice it upon its appearance. And Poseidon did send up to him a splendid bull. Thus Minos received the rule, but he sent the bull to his herds and sacrificed another . . . Poseidon was angry that the bull was not sacrificed, and turned it wild. He also devised that Pasiphae (wife of Minos) should develop a lust for it. In her passion for the bull she took on as her accomplice an architect named Daidalos . . . He built a wooden cow on wheels, . . . skinned a real cow, and sewed the contraption into the skin, and then, after placing Pasiphae inside, set it in a meadow where the bull normally grazed. The bull came up and had intercourse with it, as if with a real cow. Pasiphae gave birth to Asterios, who was called Minotauros. He had the face of a bull, but was otherwise human. Minos, following certain oracular instructions, kept him confined and under guard in the labyrinth. This labyrinth, which Daidalos built, was a “cage" with convoluted passageways."

Here's an example of a labyrinth: 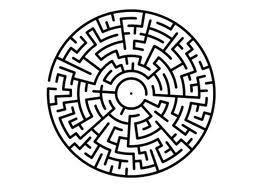 So, basically, Minos wanted to be king.  To prove that the gods wanted him to be king, he prayed for a magnificent white bull to be sent to him from the sea and the god Poseidon delivered it, on the condition that it be sacrificed.  Minos was so proud of the bull, however, that he kept it and sacrificed a lesser bull.

As a punishment, Poseidon filled Minos's wife Pasiphae with a sexual desire for the bull, and she hired the ancient engineering wiz Daedalus to create a giant sex toy that she could fit into.  The bull, thinking the sex toy was a real cow, had sex with it, impregnating Pasiphae, who was in the sex toy.  The minotaur was the result. (Listen folks, the Greeks didn't shy away from sexual stuff when they created their myths.)

Minos used Daedalus to build a labyrinth in which to keep the minotaur captive, and after Athens lost a war to Crete, Athens was forced to supply boys, each year, to feed the creature.  Ultimately, Theseus was sent to Crete to enter the labyrinth as an apparent victim and with the help of the minotaur's human half-sister, he killed this creature.

So what's so special about this minotaur?

First, it's important to realize that the minotaur (and the bull) is a significant symbol throughout the history of art and mythology.  Artistic and mythological symbolism functions as a type of language for the understanding of aspects of our "inner" world.

When language was first created or developed, it must have been exclusively meant to represent objects and relationships between objects in the outer world, because all of our attempts to speak about our inner world are metaphorical at best.

To me, the minotaur represents an aspect of our inner world which is deeply embedded in us, and which can only be extirpated through a  risky and elaborate inner journey to confront this type of "monster" inside of us.  This monster was the result of two "sins": a disobedience to the gods and an all consuming, disgusting blind lust.

So why do I like this representation of the minotaur?  As I wrote above, this is the minotaur between meals.  He looks benign, even ingratiating.  He's the charming dictator inside of us.

Why are bulls so important as symbols?

Well, for one, their horns are very symbolic.  To ancient people the horns represented the waxing and waning crescent moons. 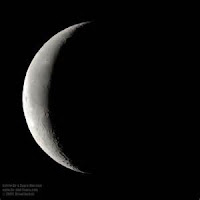 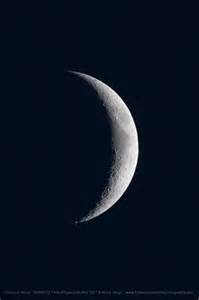 Do you see how one crescent could represent the left horn of a bull and the right crescent the right horn? So the bull possessed the power of the lunar cycle within its very being. The sun is creative, the moon is "reflective" for lack of better terminology.

My favorite painting of a bull comes from Picasso and is at the Metropolitan Museum of Art.

Here we see a bull collapsing at a bullfight.  Don't his horns look like the beginning and end of the lunar cycle?

To me, this dying bull (and, believe me, I abhor the idea of bullfights) represents the collapse of our inner dictator, an inner blind force that needs to be eliminated for greater 'spiritual' development to occur.  In Buddhism 'nirvana' literally means 'the extinguishing of a (inner) fire.'  We see a type of extinguishing here.  The bull, in all of its rage, cannot stop its collapse in this painting.