A colorful vulture by Anne Chu at Lehmann Maupin

Believe it or not, the vulture is one of the world's oldest 'religious' or spiritual symbols.

Even today the practice of 'sky burial' occurs in Tibet and among the Parsis in India.  The ancient Zoroastrian religion had 'towers of silence' where the corpses of recently deceased people were placed and where the vultures would pick apart and eat the flesh and then take off into the sky. So the practice of leaving a corpse for vultures to 'clean' is called 'sky burial'.

In the ancient world, one's bones were especially important because bones never decay - bones represented the eternal aspect of a person. It was important to clean the bones of the decaying flesh and then to properly take care of the bones.

Indeed, it was this practice of consuming the flesh of the corpse and then sailing up into the air that gave the vulture its symbolic meaning.  The vulture was like an early version of Hermes, the messenger god.  Or maybe even like the Valkyries who took the corpses of dead heroes up into the sky so their souls could rest in Valhalla.  The vulture represented the force or ability to raise the soul into a higher level of being. 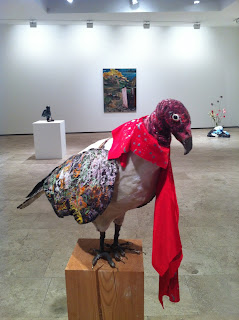 What I liked about Chu's vulture was that this vulture is not just a messenger, but seems to have transformative powers as well.  On the scarf wrapped around the vulture's neck there are little symbols often associated with the practice of ancient magic.

I think if we look at the evolution of religion, we probably see the use of animal and plant symbolism initially that then becomes anthropomorphized into human-like gods.  This colorful vulture represents (for me) an intermediary god/spirit (between the earth and the sky) much better than the human figures in mythology.

Gobekli Tepe, in Turkey, is currently the archeological site of what appears to be the oldest deliberately constructed religious structure ever found. It's about 12,000 years old.

We find illustrations of vultures, sculptures of vultures and sculpted vulture heads there. 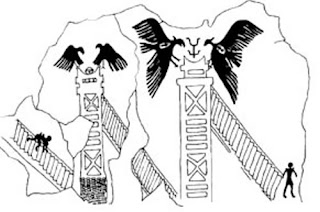 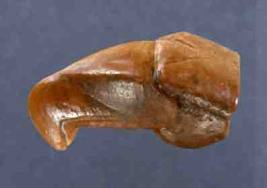 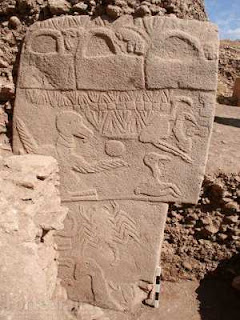 A documentary about Gobekli Tepe: