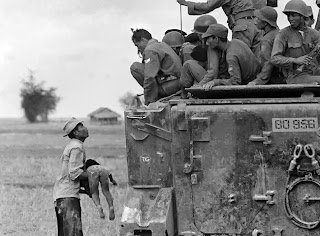 The war in Afghanistan has now lasted longer than any previous American war (12 years), and although Barack Obama promised (in the 2008 campaign) that he was going to bring this conflict to an end, there is no end in sight. If you want to know why this war will not end, you can look at the photos at the Steven Kasher Gallery in Chelsea, Manhattan. You will directly sense the effect that good photo-journalism can have on ending a war and, consequently, you will sense the absence of effect that a lack of responsible photo-journalism is having in the current war.

They said Vietnam was the first ‘televised’ war; what they didn’t say was that it was also the last ‘televised’ war. This photo exhibit shows you why. These photos by AP photographers literally helped bring the Vietnam War to an end. There are ZERO photos coming out of Afghanistan and if you ask any American what is going on in Afghanistan, you will get no answer. At the Steven Kasher Gallery you will leave asking yourself where the photo-journalists are now. Given how affecting these photos from Vietnam are, why don’t we see ANYTHING about what’s happening in Afghanistan? In an era where we have advanced communications technology and stories and photos can spread instantly, why are there no photos of what’s happening in America’s longest war? 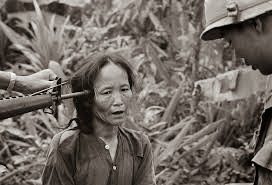 In Afghanistan we are interminably fighting against ‘terrorism;’ in Vietnam we were fighting against ‘communism.’ David Halberstam’s ironically titled book: “The Best and the Brightest,” highlights the creation and execution of the Vietnam War policy in the Kennedy and Johnson administrations. Although Kennedy was a Democrat, he considered himself a hard-line anti-communist who was going to demonstrate that communism was not going to spread on his watch. So although Eisenhower had steadfastly refused to commit troops to a corrupt dictator in South Vietnam (whom Kennedy would ultimately assassinate shortly before his own assassination), Kennedy took the first steps in what would become an inhumane fiasco for both the youth of the USA and the people of Vietnam. 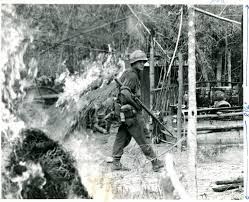 Reading Halberstam’s book is, basically, a shocking experience. We see the fruits of an advanced American education. The best and the brightest men (and ‘men’ is the operative word here) in the nation made ridiculous and cruel policy decisions based on an utter lack of knowledge of Asian culture and an anti-communist belief system bordering on superstition. These men – McNamara, Bundy, Rusk, Ball, Clifford et al., were, for the most part, “Ivy” guys. These were business and government and foundation leaders. These were men of experience and intelligence, yet they were all men of the same race, same basic religion, same educational system and same economic status, who could not move beyond the thinking patterns and racism of their social class and merely sat there reinforcing their own prejudices and insane decisions while 50,000 American men died and at least 1 million Vietnamese suffered the same fate. Indeed, the Vietnamese people still suffer from the war in that thousands of children are born each year with birth defects due to the dioxin in the ‘Agent Orange’ which Dow Chemical and Monsanto provided to the military to drop on Vietnamese forests.

A Buddhist monk burns himself to death to protest the policies of the S. Vietnamese government 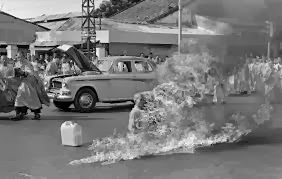 The photos in the Steven Kasher Gallery show the ground-level results of the upper-level policy decisions, and anyone who visits this show will be deeply affected by the cruelty, callousness and suffering caused by an misinformed and, frankly, ignorant and indifferent government comprised of American 'elites.' The photos provide a cross-section of the war. We see conquered French soldiers waiting, stupefied and shamed, for repatriation. There is the Vietnamese father helplessly holding his dead child in front of a convoy of South Vietnamese soldiers. We see the Buddhist monk's self-immolation to protest the policies of the Diem government. We see an elderly Vietnamese woman with an M-16 rifle pointed at her head…a young Vietnamese woman continually having her head dunked under water in an effort to extract information from her…the US soldier casually walking past a burning village… the Ohio national guard shooting American college students protesting the war…brave but frightened US soldiers helping their wounded comrades...Vietnamese women and children hiding in a dirty canal to avoid being shot… 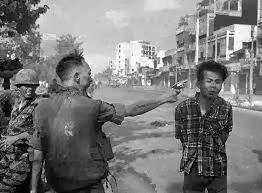 We also see two of the most iconic images of the war. Indeed, we see the whole photographic sequence of Phan Thi Kim Phuc running from her village, her flesh burned by napalm. We also see the photos before and after the infamous shooting by the South Vietnamese general during the Tet Offensive, who summarily shot a young Vietnamese man in the head. 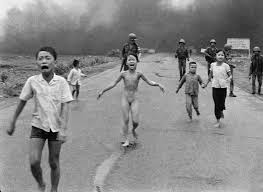 Among the horror though, we also see some moral heroes. Nick Ut was certainly a hero. Vietnamese, himself, he was hired by AP to take photos of the war. Not only did he capture one of the photos that certainly began to turn the American people against this war, but he also went above and beyond his duties as a photographer to help save the life of Phan Thi Kim Phuc. Daniel Ellsberg is also shown. Ellsberg – the Harvard graduate and ex-US Marine who became disgusted with the war and turned over thousands of secret documents to the NY Times – is shown standing defiantly in front of a court house, smiling, ready to go to trial for taking action to stop something he knew to be wrong. Unlike Snowden, Ellsberg stayed to face the consequences, and he won. Ellsberg stands as one of the true heroes of recent American history. Like these photo-journalists, he helped end this war and also helped to bring down Richard Nixon, one of the more shady of modern US presidents.


This show will leave the viewer quite moved, even changed. Hopefully the show will also leave the viewer committed to asking his/her government and media where the current photos from America’s silent wars are. Photo-journalism helped stop an unjust war, but the American power-structure learned its lessons. Journalists are now ‘embedded’ or just prohibited from documenting what is happening. News sources, as well as news consumers, should be outraged and work harder to learn the truth.

Here is a link where you can see about 30 of the photos from the exhibit (much larger than on this google blog):