The Future Ain't What It Used to Be: David Opdyke at MagnanMetz in Chelsea 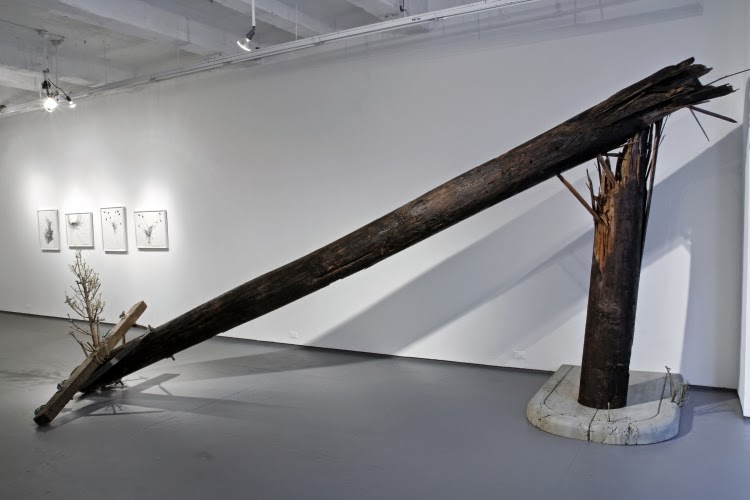 Marx bought into Hegel’s ‘historical materialism’- if you look at history you will see there has been moral progress through the ages and that history will continue to develop in a positive and humane direction. But Marx believed that history really showed three basic stages of development (epochs) and each epoch was characterized by better and better economic relationships.  1) Slave-owners and slaves morphed into 2) lords and serfs and these folks morphed into 3) factory owners and workers.  The lot of the common person becomes less horrific through human history and each epoch transitions into another due to technological changes. Advances in technology will ultimately lead to the fourth epoch of completely humane socialism, where there will be no dominant and subservient economic relationships any more (thus spoke Marx).

David Opdyke seems to focus on and examine this lingering belief that technological change can bring about advancements in human relationships or humane progress.  Indeed, he seems to have a jaundiced view of the whole concept in his show at MagnanMetz: The Future Ain’t What It Used To Be. 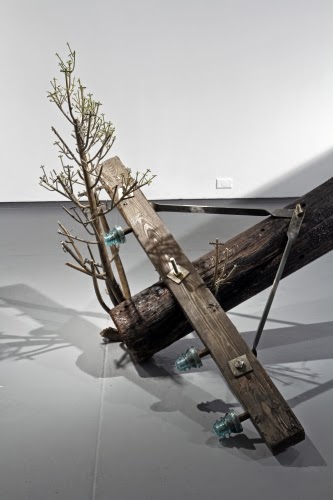 Opdyke focuses on the technological changes within his own life and frames the exhibit within the context of the Voyager 1 mission.  As a third grader the artist learned about this space mission which intended to carry various artifacts from earth into deep space.  The mission was launched in 1977 and Voyager made news in 2012 when it was reported to have left our solar system as our message in a bottle to whoever or whatever might, on the off chance, find it. 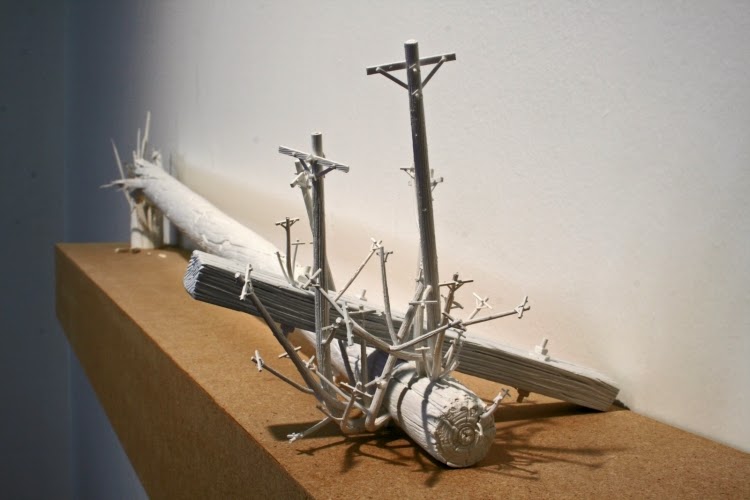 Dominating the show, and a real eye-catcher in the front window, is a broken utility pole.  Upon closer inspection, little organic utility pole shoots are growing out of the top of the damaged pole.

Antonio Gramsci once wrote (about his era), “The old is dying and the new cannot be born; in this interregnum there arises a great diversity of morbid symptoms.”  It’s as if Opdyke is saying, “Yes, the old is dying, but the new still looks too much like the old.  Where’s the great radical changes that were going to make life so much better?  Where’s the liberty, equality and fraternity that was part of a natural historical process?”  Indeed, world poverty still exists, people still die of starvation on a daily basis all around the world and economists are warning of a new oligarchy in the USA due to the ever widening income gap. We destroy the old and replace it with newer versions of the old. 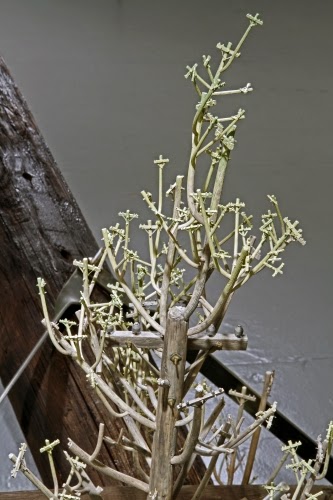 When we look at our technological innovations, they allow us to listen to more songs, take better photos, buy things more easily.  Technology was never a force for the development of humane values, as Marx believed (even socialist theorists no longer attribute the changes Marx perceived in human history to technological innovations).  Indeed, the Voyager 1 chunk of time seems to show that technology can be a pacifying, hedonistically fueled engine that increases inequality and human suffering around the world.

Indeed, the broken utility pole looks a lot like a broken crucifix, which is what I thought it was when I first saw it through the window.  It could be that the artist is also implying that a powerful religious inclination or movement can be broken or destroyed, but, look closely, little sprouts of the religion will begin reemerging.  Is this good or bad?  Is he saying our faith has temporarily been destroyed but can never be completely extirpated? Or is he saying we can abandon an overused, trite and ineffective concept only to rediscover and re-embrace the same thing over and over again for lack of anything better? 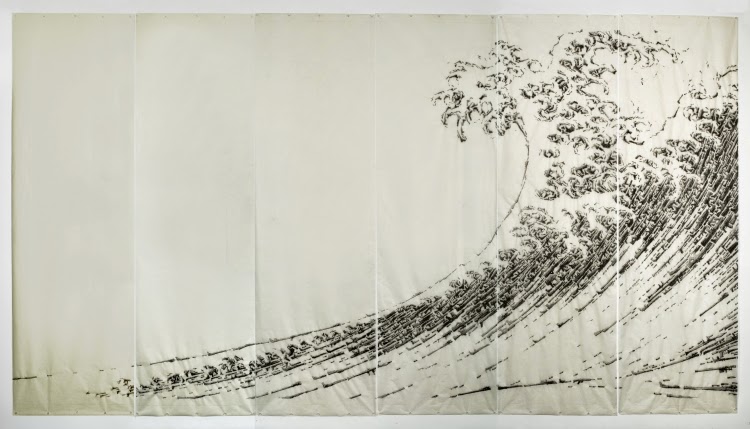 The other ‘major’ piece in the show appears to be a giant version of the Great Wave of Kanagawa by Katsushika Hokusai. This has become one of the more iconic works of art now due to the utter horror and the social and theological implications of the Japanese tsunami of 2011.  This disaster seems to be our age’s ‘Lisbon earthquake of 1755’, in which almost the entire city of Lisbon was destroyed and 40,000 people killed on a major church holiday.  The image of Hokusai’s wave now represents those nagging and unanswered questions about progress and safety and life in a universe dominated by a benevolent God – and whether any of those beliefs were ever true. If everything is OK, how does something like this happen? Or maybe I should say the image should represent these nagging questions and would represent them if people had attention spans and thought-capacities that had not been rusted, shrunk or destroyed by chronic overuse of the internet and pleasure inducing electronic junk. 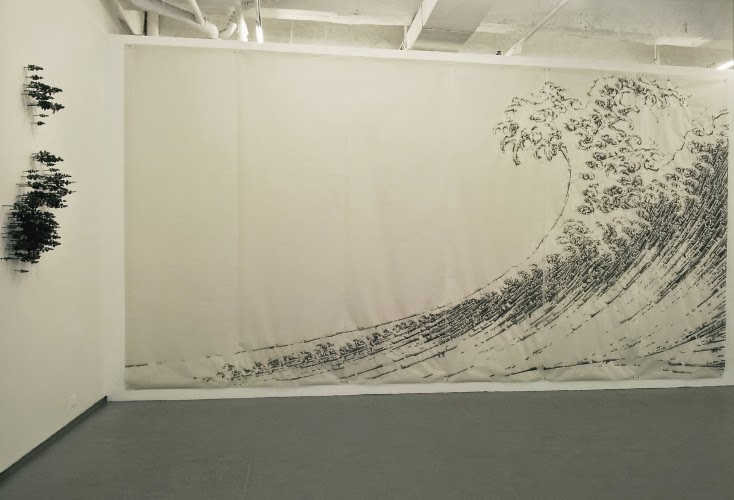 Upon closer inspection of the piece, however, you see that the great wave painted by Opdyke is comprised of a zillion little images of automatic and semi-automatic rifles.  In conjunction with the broken utility pole – which could even mean the end of the Cold War, which then sprouted even more little ethnic, ideological and religious wars – this wave could represent the ever increasing development of the arms industry as a potent and ever essential aspect of the world economy.  We read about globalization and free trade and cultural and business exchanges, but then we also read about new $3 billion US stealth ships and China’s developing military strength.

So Opdyke challenges the viewer to think about the changes that occurred between 1977 and 2012.  We went from 8 tracks to iPhones, typewriters to keyboards, books to electronic screens.  We also went from the B-52 to the Stealth Bomber.  We went from the Cold War to the War on Terror.  Where is Hegel or Marx in all of this?