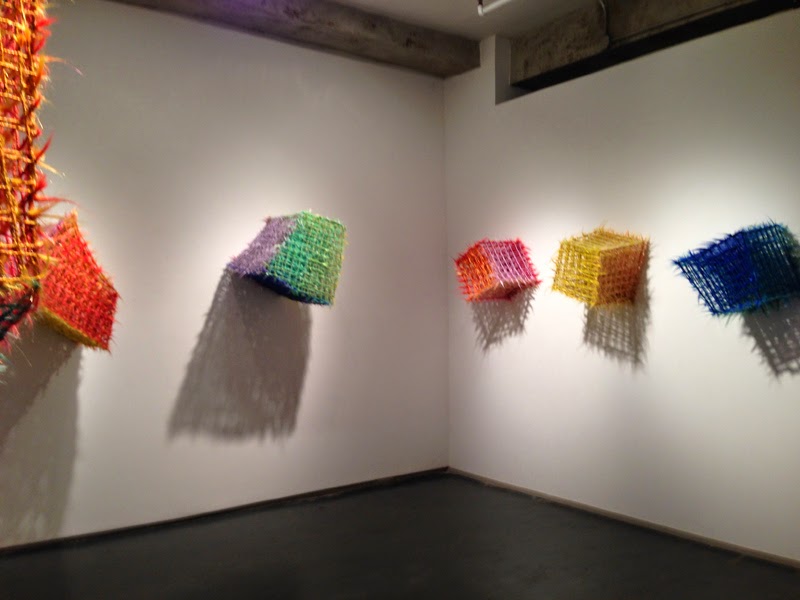 As a possible descendant of Carl Friedrich Gauss (the Prince of Mathematicians, the inventor of non-Euclidean geometry and the creator of a 17-sided polygon - this was once big news in the field of geometry), I was compelled to see the show of work by Sydney Blum, at Kim Foster Gallery, called ‘Fuzzy Geometry.’

Fuzzy Geometry is actually a serious subject in the field of mathematics with philosophical and ‘theory of knowledge’ implications.  All I inherited from C.F. Gauss, however, was his big nose so I don’t claim to be an expert on geometry.  From what I can tell, I’m guessing Fuzzy Geometry is kind of like the Heisenberg Uncertainty Principle, but applied to bigger stuff than subatomic particles. I think Heisenberg said that in the process of trying to pin down the location of various particles, we change the scene so that an exact location of anything subatomic can never be precisely known.  We can have kind of a ‘fuzzy’ awareness, however.  But a fuzzy awareness seems to work – it’s good enough to do the trick. 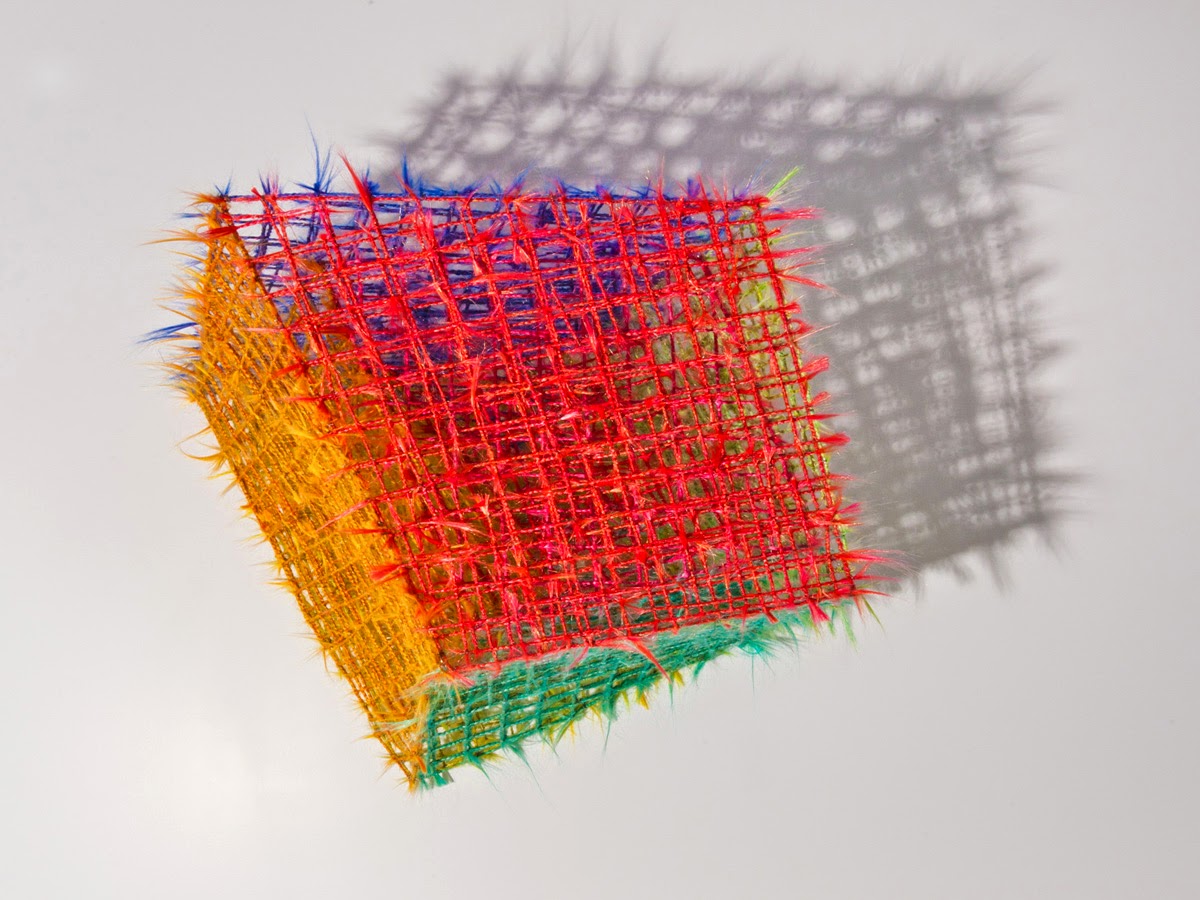 It’s the same thing basically in Fuzzy Geometry. Essentially there is a difference between theoretical space and real space and our capacities to measure and create in these two realms. Imprecision is an aspect of any type of real measurement and it is ignored in the field of pure mathematics but it cannot be ignored if you are building airplanes. Frankly, I don’t know exactly what Fuzzy Geometry is, but the concept can still be meaningful to me in artistic terms. I think we can go with the definition that pure location and measurement is a myth in the real world and that we are always working with a type of fuzziness when we measure stuff and the relations between stuff. We want absolute precision and certainty, but we need to throw in the towel and accept the fact that we have to live with a certain amount of ambiguity: but that’s OK.

So the artist basically works and plays with the concept of ‘fuzzy’ or ‘fuzziness’.  In the past she literally used human or animal hair in her pieces.  After a while she had ethical qualms about doing this and deliberately switched to synthetic hair to connect the dots in the coordinate systems she uses in her pieces.  I think how Blum uses hair is, in fact, a key to interpreting the pieces because hair possesses a number of symbolic qualities.  Hair can represent potency – remember Samson?  Hair is also sexy - it no longer serves any real survival value for us – it’s there purely for Darwinian ‘sexual selection.’  It’s also a component of the ‘animal’ or ‘natural’ self we often attempt to deny. 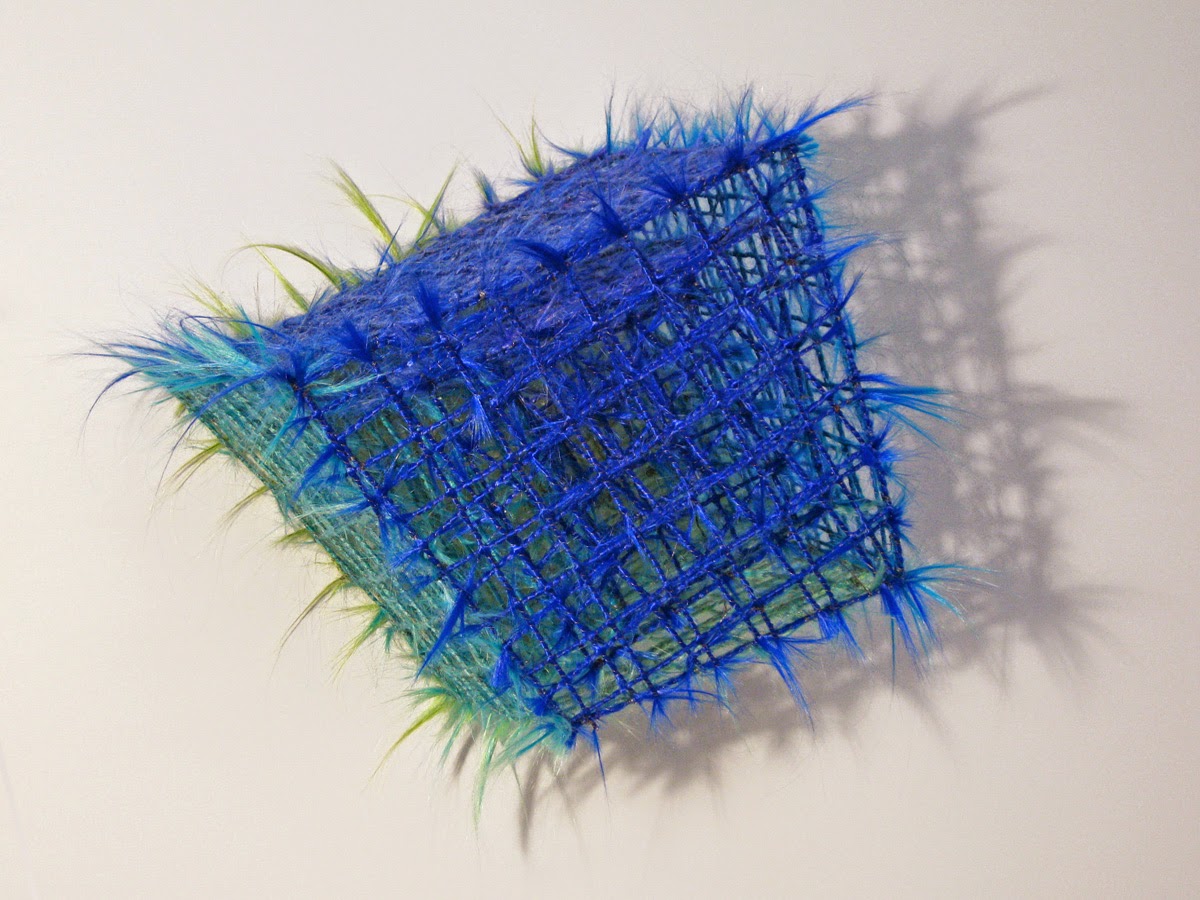 In her pieces, as I interpret them, Blum seems to be subjecting hair to a type of procrustean process.  (Quick ancient Greek mythology refresher here: Procrustes had two beds: one long and one short. If a traveler stopping by his home in the wilderness was tall, he’d be given the short bed and vice versa. At night the tall person’s limbs that overhung the bed would be chopped off by Procrustes or a short person would be stretched to death to fit the longer bed.) The hair seems to be coiled and stretched, unnaturally, between the points. It is then tied in place by wires.  The hair could be long and flowing and gently curling, but it becomes rope-like and looks to be stretched to the point of bifurcation.  The implication (to me) seems to be that intellectual systems are supposed to exist  for us, they are supposed to aid us in our development in a smooth and easy process; we should not have to try to fit into such systems or become slaves to them.  So the Fuzzy Geometry pieces, potentially, represent a kind of conflict between a natural and theoretical development – intellectual systems often expect nature to conform to the structure of thought and not vice versa. The system does not form around the hair, the hair is stretched within the system.  There might be a more natural process of perception and assessment than the purely abstract and mathematical approach. Indeed, a purely abstract approach might always be quite limiting or even destructive to a type of natural development.

Of course there can be a zillion interpretations and another could be that these geometrical shapes are kind of like Meret Oppenheim’s furry cup and saucer at MoMA. Just as the cup and saucer have absurdly transformed into something hairy, maybe the geometrical shapes, or what they represent, possess an inherent quality to morph into something more organic and lively once the need for precision and exactitude is abandoned. 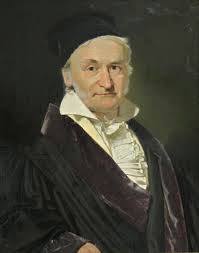 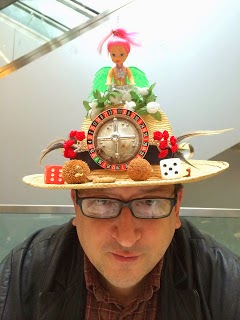 I would argue there is an uncanny resemblance between our noses.  Does this prove descent? Hmmmm.....our noses are so similar!  Actually, I have no idea whether I'm related to the great guy or not. I never really cared enough to fully check.
Posted by Daniel Gauss at 1:10 PM