Photo-realist paintings at The Curator Gallery in Chelsea

The Curator Gallery, in Chelsea, invites various folks to curate shows on a periodic basis. The gallery was initially underwritten by Ann S. Moore, a retired Chairperson of Time, as her way to contribute to the arts scene in NY. The current show “Verisimilitude” was curated by Ethan Karp, of the now shuttered but immensely influential OK Harris Gallery, and features 6 photo-realist artists.

Photo-Realism seems to be more of a technique than a type of content.  The paradox of it is that artists often use this technique to tweak or reposition aspects of perceived reality to make reality reveal more than reality itself normally does. So the choice of ‘Verisimilitude’ as the title for the current show is clever and ironic. The title of the show seems to buy into the concept that the artists are just approximating real things as well as they can.  However, each artist seems to be choosing and enhancing aspects of reality to convey a greater insight into the interface between perceived reality and inner experience.

Gina Minichino, for instance, does something interesting with the types of inexpensive, brand-name food and candy you see at and consume from the grocery store. She either portrays these products in their original consumer packaging or as ready to eat. From this contrast, we see that the packaging does not necessarily enhance our desire for the food: the need to preserve and sell the food requires a compromise. The Wonder Bread wrapper and the Tic Tac box are merely reassuring signifiers and do not engage you at the level of epicurean want that the food itself engages you at. Yet, the packaging seems to employ transparency and design in an almost titillating manner. 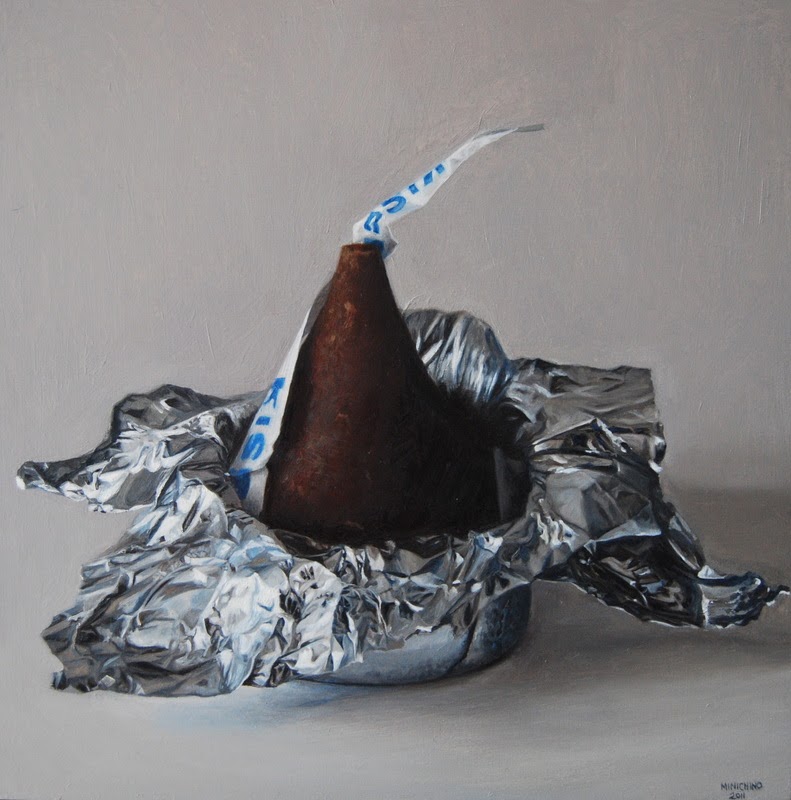 You see glimpses of the product, through the wrapping, to get the juices flowing a little, but the design itself merely adds an element of visual attraction. Minichino captures how the advertising folks are trying to catch the eye and the gut at the same time.  In “Kiss”, however, we see a Hersey’s kiss stripped bare of its wrapper and engaging the viewer in a way that one might almost say pornography engages one. This chocolate looks extra succulent. And, am I crazy, or is this ‘kiss’ beginning to look more and more like a stylized clitoris in a stylized vagina? If I took a Rorschach test I’d probably be committed to an institution.

In any case, this is candy ‘stripped bare by her bachelors, even’.  It is painted as an object of desire and like pornography the goal is to stimulate a craving as a hedonistically pleasant emotional response. Yet, Minichino also reveals desire as being composed of the painful and pleasurable at the same time.  We anticipate the pleasure of consuming while feeling pangs that require some type of effort toward fulfilment when looking at this creamy dark chocolate. Don’t worry, the gallery has a bowl of kisses waiting for you so that you don’t go nuts looking at this stuff. 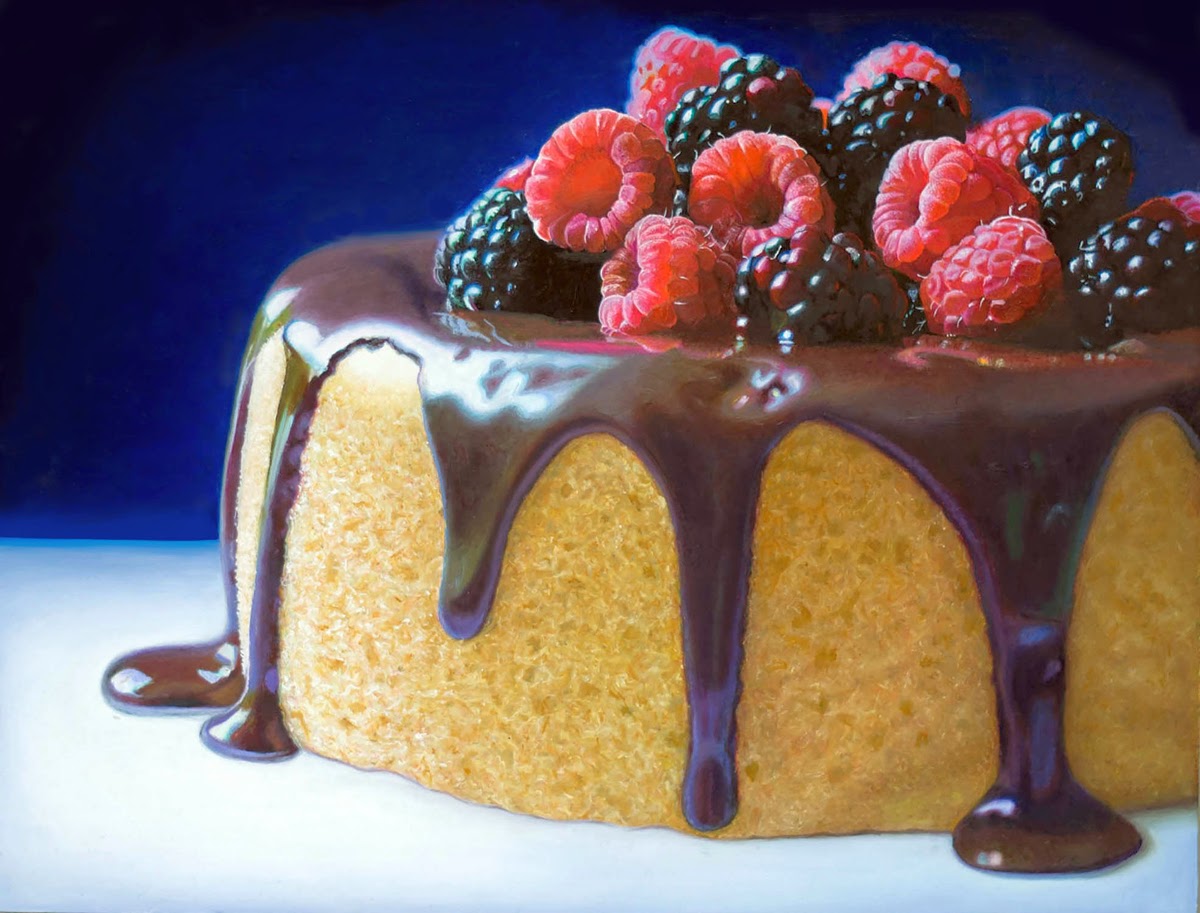 Mary Ellen Johnson helps further explore what exactly the components of our sense of ‘desire’ are, in her food paintings.  In Berries and Cake we see an object of desire comprised of three distinct elements. We are attracted by the memory of the discrete tastes of the syrupy chocolate, berries and cake itself, and the cumulative delight of combining these tastes in an infinite number of combinations.  Yet again desire is revealed as beginning with pleasurable memories and sensations which morph into a painful goading to possess and consume.  I see the cake, remember the tastes of the components and suddenly I am whipped and goaded by something to get that object. 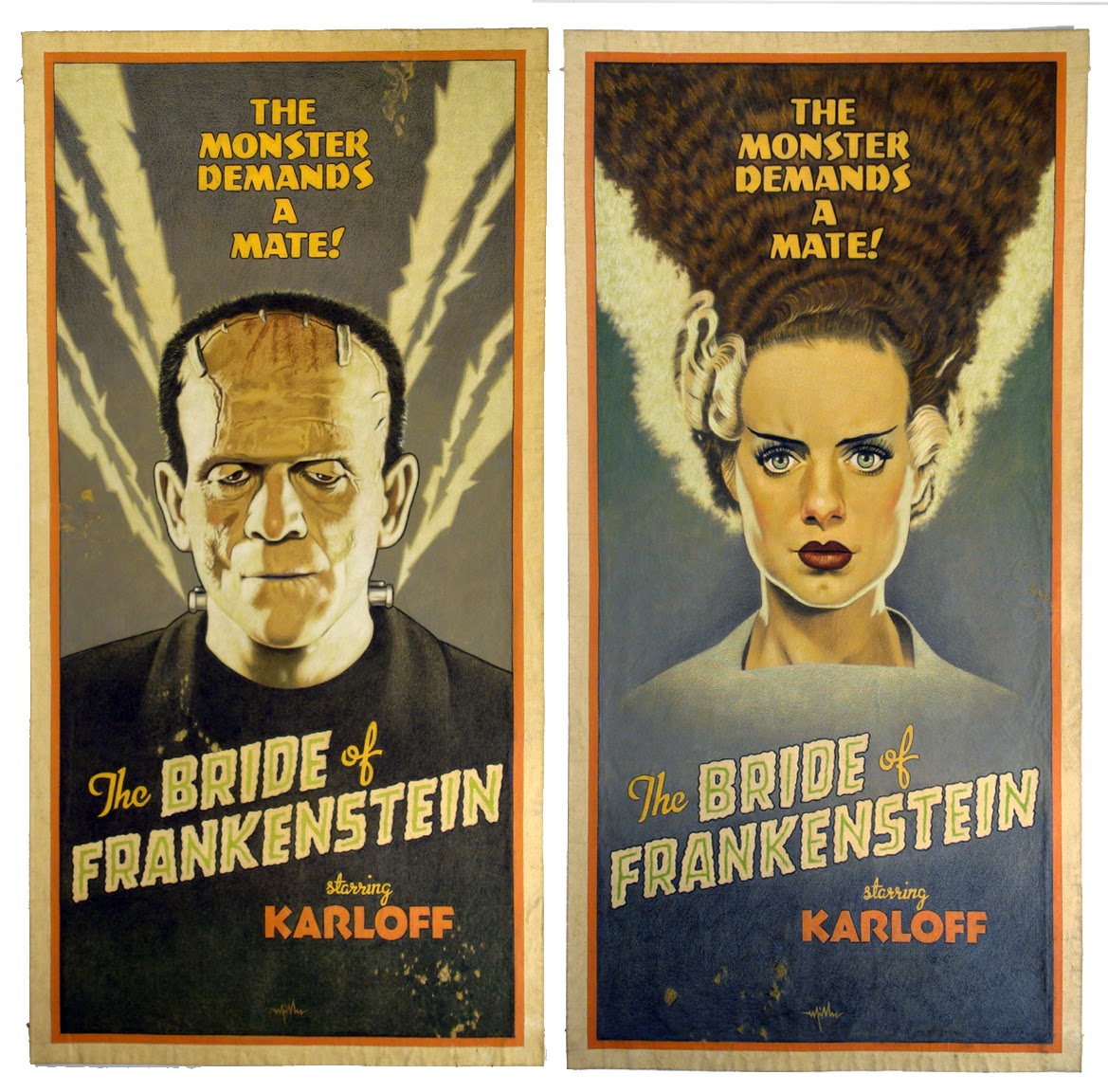 Turning away from food, Arthur Miller brought back some pleasant memories with his various depictions of movie and entertainment posters of days gone by.  When I grew up in Chicago there was a weekly TV show called Creature Features, during which famous old horror films were shown.  Here those folks from the Universal Studios were – especially Bela Lugosi and Boris Karlov.  Just seeing these guys made me smile and evoked so many memories from my youth, when I was able to vicariously live through hellish horrors in the comfort and safety of my parents’ bungalow, instead of enduring my contemporary hellish horrors of Queens roommates and other assorted NYC terrors.  So we have super-realistic depictions of these famous monsters of Hollywood – why?  These monsters were allegorical figures presented to the masses. By depicting them Miller shows how, perhaps, mass media dilutes meaningful content in its desire to entertain and profit.  The vampire was a potent symbol of oppression and spiritual depravity for generations, but now I smile when I see Bela Lugosi. 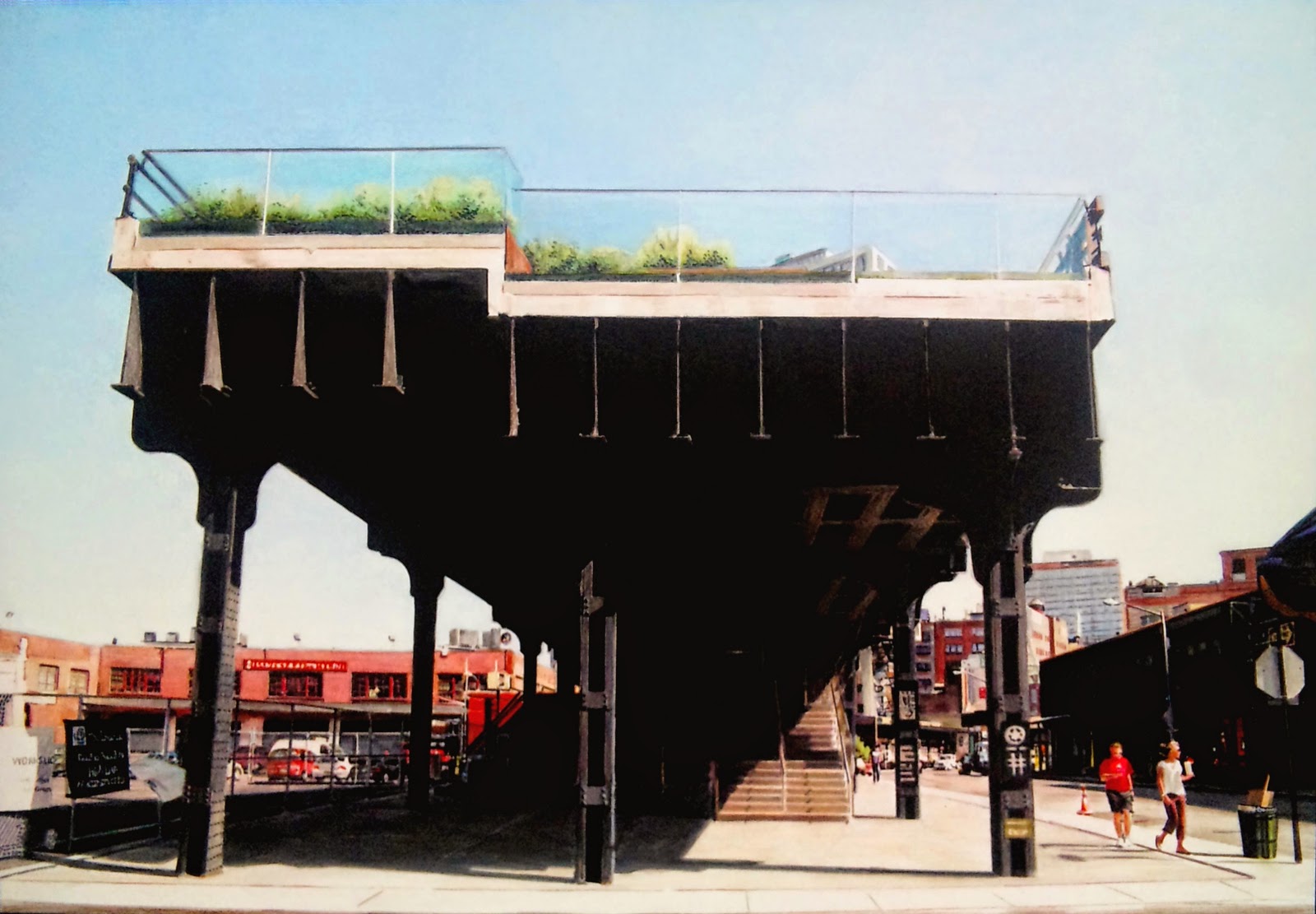 To me Romaine E.’s work shows the sense of permanence and transition that characterizes every city.  You see the Highline Park looming like an unmovable behemoth while ant-sized people move about.  100 years after I’m dead this tourist trap which has helped ruin the Chelsea gallery district will still be there while I’m being dined on by the worms.  In all of his paintings at this group show you seem to see large, permanent structures through which our ephemeral lives flow. 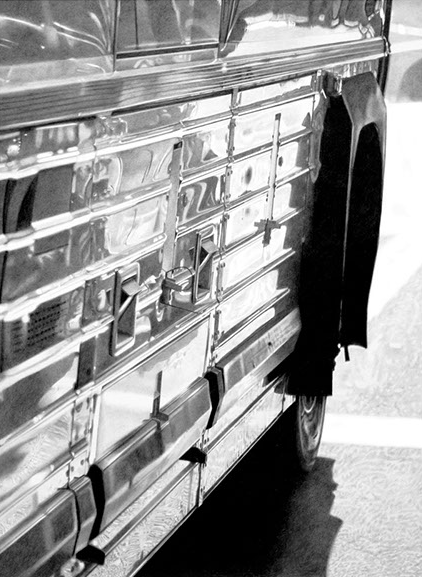 Roger Watt focuses on the reflective qualities of highly polished metals. To me this type of metal represents our desire to fight and conquer the Second Law of Thermodynamics.  We live in a universe of decay and decomposition and this metal seems pristine and timeless and resistant to corruption.  Shiny metals are part of the myth upon which we build our lives and societies. 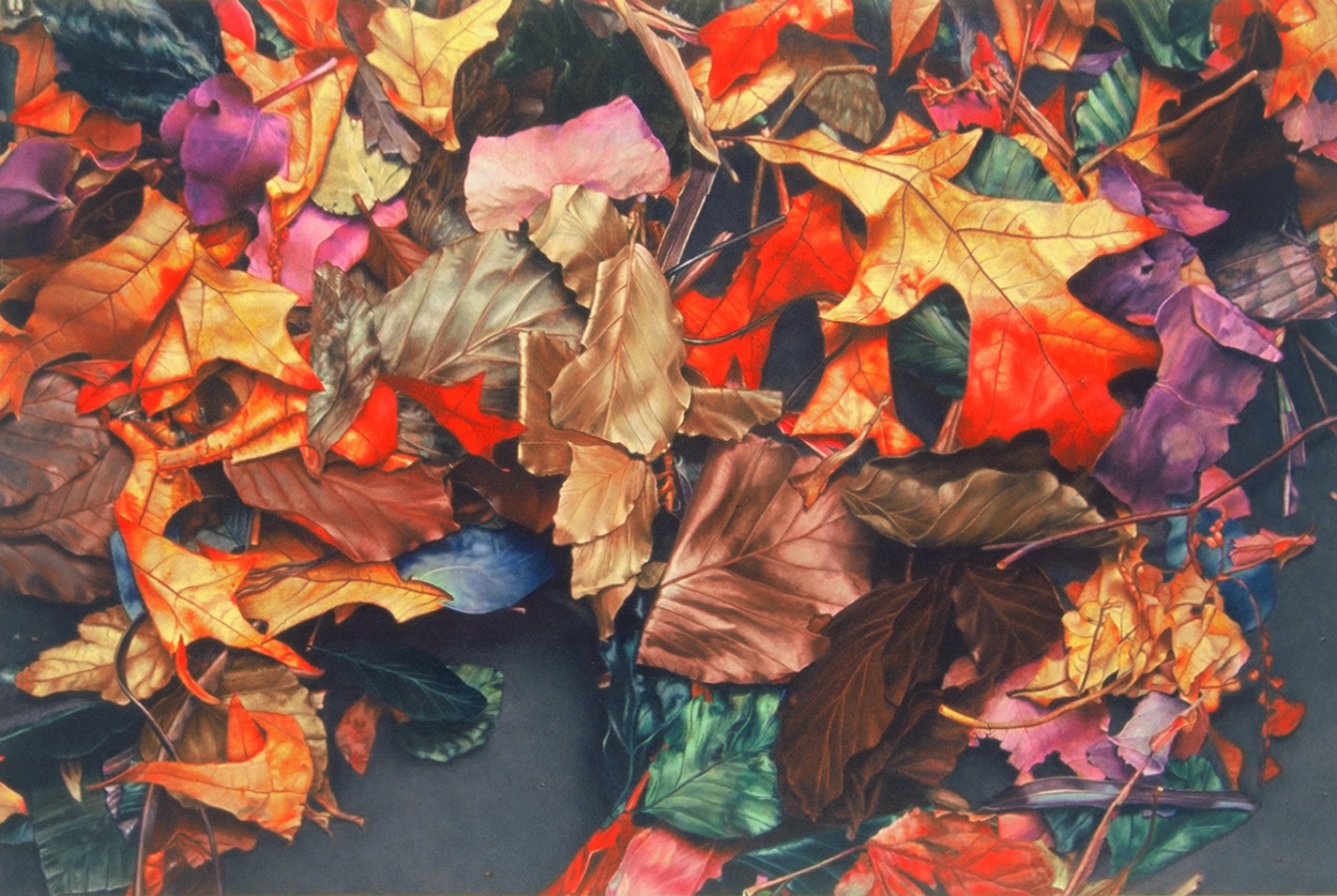 Finally, speaking of the Second Law of Thermodynamics, there are those that value it.  Ron Weis paints leaves which have changed color due to the drop in temperature which precludes the development of green-giving chlorophyll in plants.  Basically these leaves are dying and in the process represent their most amazing colors.  Is mortality a curse or an opportunity to seek meaning and contribute to those around us in a sense of mutual empathy and consideration? Weis seems to suggest that the aging process and the process of ‘decay’ can be a thing of beauty and lead to a sense of acceptance and equanimity instead of dread.
-------------------------

This is a relatively new gallery - here's an article about it: http://artsbeat.blogs.nytimes.com/2014/02/26/former-time-executive-to-open-chelsea-art-gallery/?_php=true&_type=blogs&_r=0


I mentioned Creature Features above. Here is the opening theme from WGN-TV Chicago: