Inside and Out is a group show curated by Suechung Koh at Elga Wimmer Hyun Contemporary. The connecting thread through the show seems to involve the experience of new, immigrant, upwardly mobile New York City dwellers and how their new city provides novelty, excitement, and challenges for growth while also providing experiences of immense anxiety, concern and even defeat. 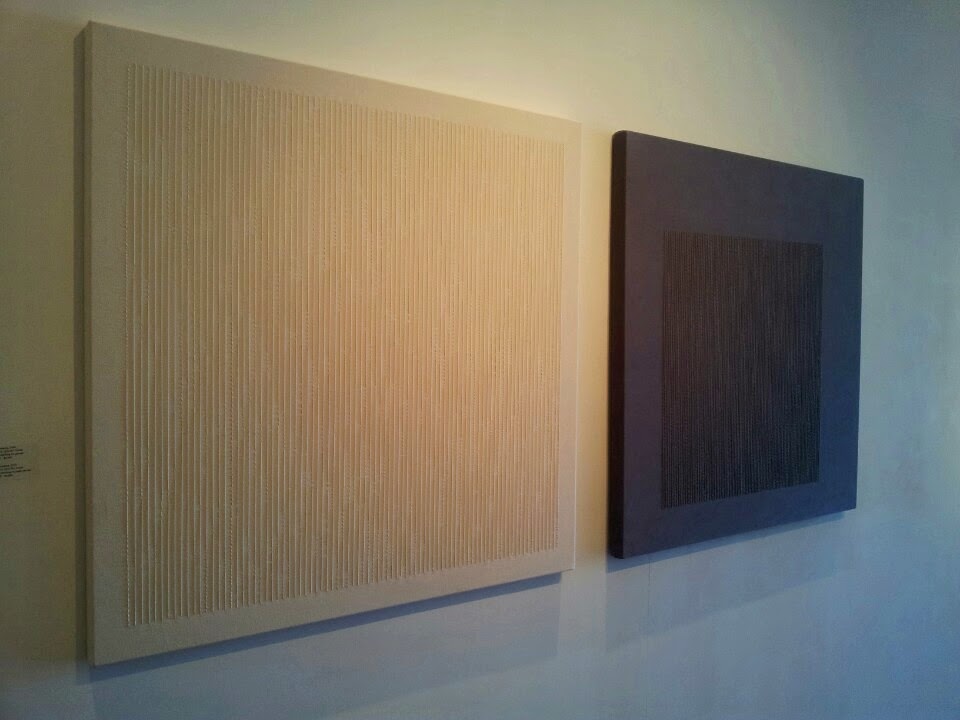 For this show, Kyunghan Kim has created large pieces which consist of vertical, parallel stitches and groups of stitches, of various lengths. The stitches actually correspond to words and word patterns in specific New York Times articles.  The work was born of Kim’s frustration, after arriving in the USA, of not having a sufficient command of English.  He saw lots of interesting looking folks reading the NY Times and wanted to do it, himself, knowing that there was meaningful and engaging content to be absorbed and he realized that reading the Times was a symbol of enculturation into a certain type of American social class. Unfortunately, like many folks who come to New York looking for a better life, he was initially locked out from this experience due to a lack of English fluency. Indeed, for many ambitious immigrants, being able to read the Times is a measure of full integration and success.

So his pieces can have various interpretations. He shows that, more than anything, integration into a society involves interpreting, embracing and embodying symbols. So, the piece could even be a type of protest – Kim could be saying, “Let these strange symbols of the American dominant culture remain locked. I can live without them.  They are like stitches - too binding and limiting anyway.” The artist could also be making a statement about the nature of language itself.  The stitches are empty proxies for words, sentences and paragraphs. Their emptiness forces us to think about what, exactly, language really is. What can and can’t language accomplish? What is it that gives these alphabetic symbols such engaging potency, and just how potent or limited are these symbols?  What power do these 26 letters have that stitches do not have? Language, moreover, also is a stich-like process…it penetrates and fixes/stabilizes…it kills direct experience to convey this experience in a different form. Language is born from but then divorced from reality but creates a new reality which then influences experience and reality through a bizarre and continuous feedback loop. 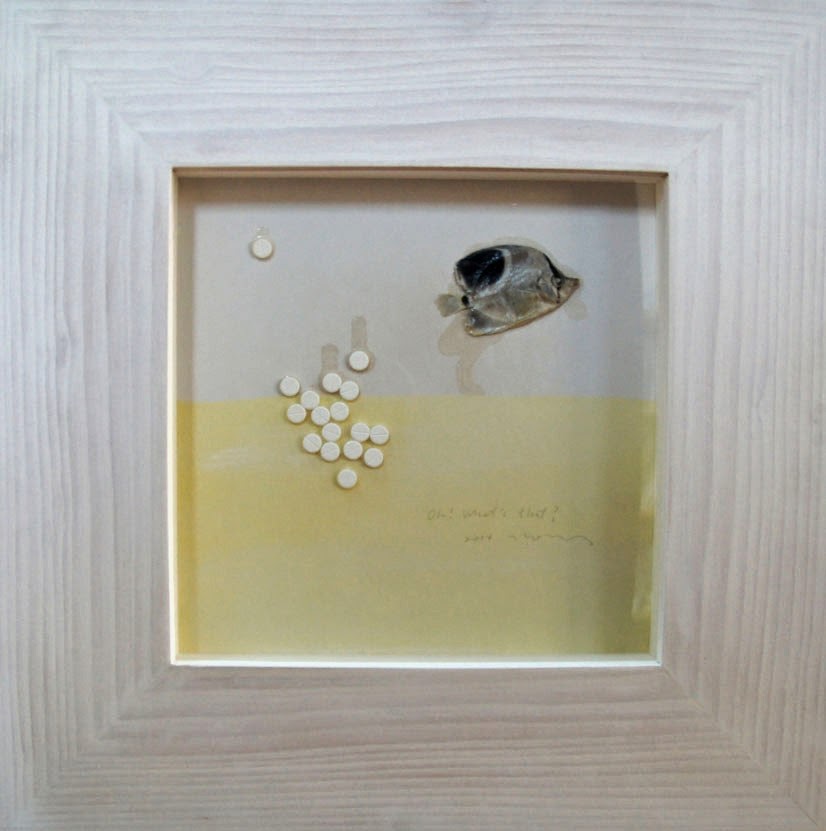 Hongseok Kang presents aquarium fish which have died. In Koh’s program notes she states that the fish, to the artist, are like city dwellers dismissed from a company, abandoned by others, lost, forgotten, marginalized. In a large city we become accustomed to viewing each other in such a way – we lose touch with our own humanity and lose feelings of sympathy or compassion for the actual human beings around us. Our sympathy becomes directed toward people on TV thousands of miles away while we have real, significant suffering outside our doors.  So in the piece you see here, we see the dead fish surrounded by a type of now useless medication.  The fish is against a two-toned background signifying an underlying reality of ‘higher’ and ‘lower’, perhaps signifying the endless competition we are subjected to in the city, or maybe even the concept of a type of spiritual development that might be possible once one is expelled from the rat race. 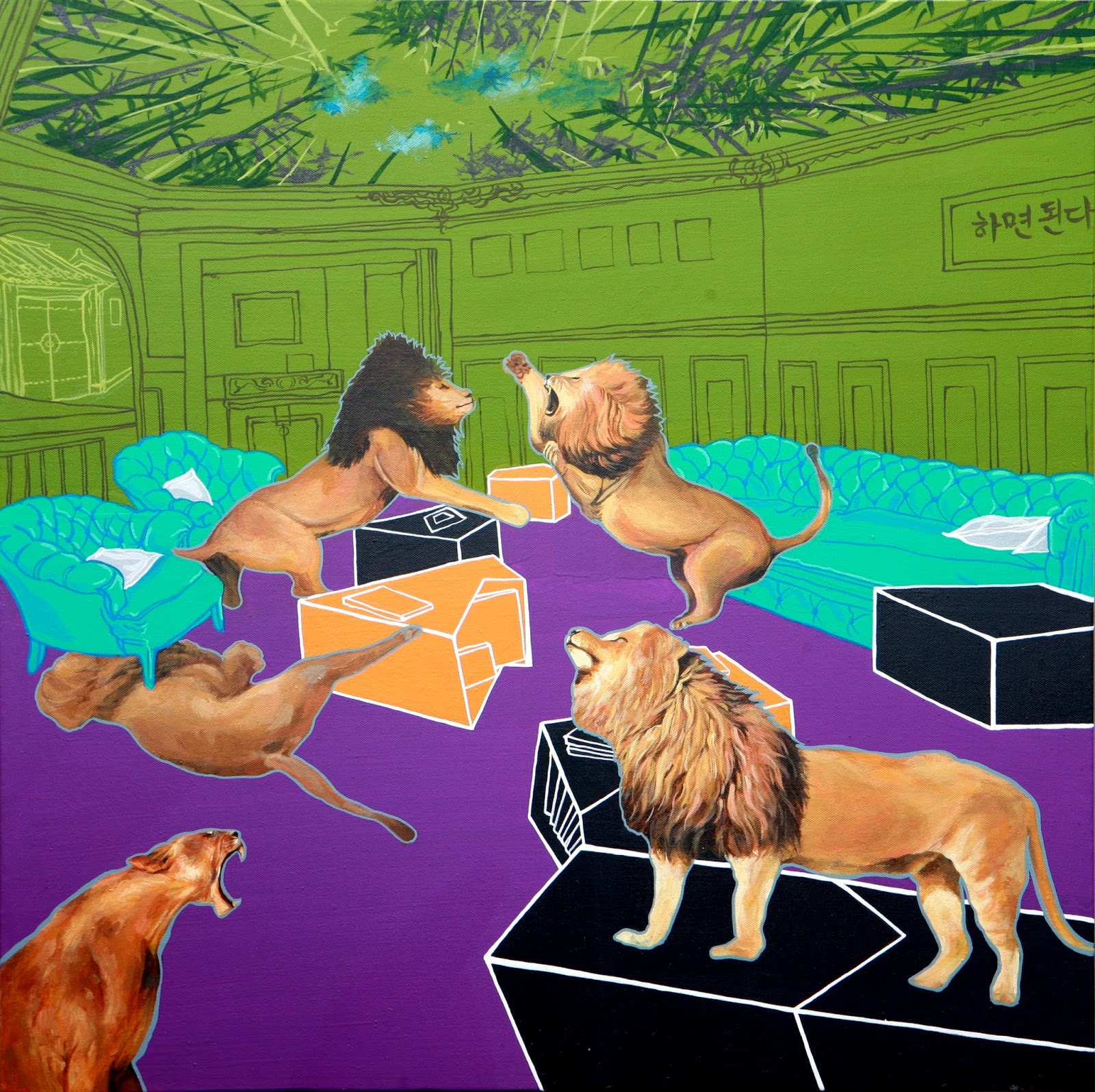 Jeonghee Park presents humorous depictions of animals which have transgressed into human spaces. Here we see a group of lions in someone’s posh apartment.  The trappings of our lives are supposed to pacify us – those comfy couches are meant to make us docile and well heeled.  The lions, to me, are our form of protest. Underlying the comfort and self-induced tranquility bought from high end furniture and interior decorators we still retain the capacity to demonstrate moral and socially transformative power. 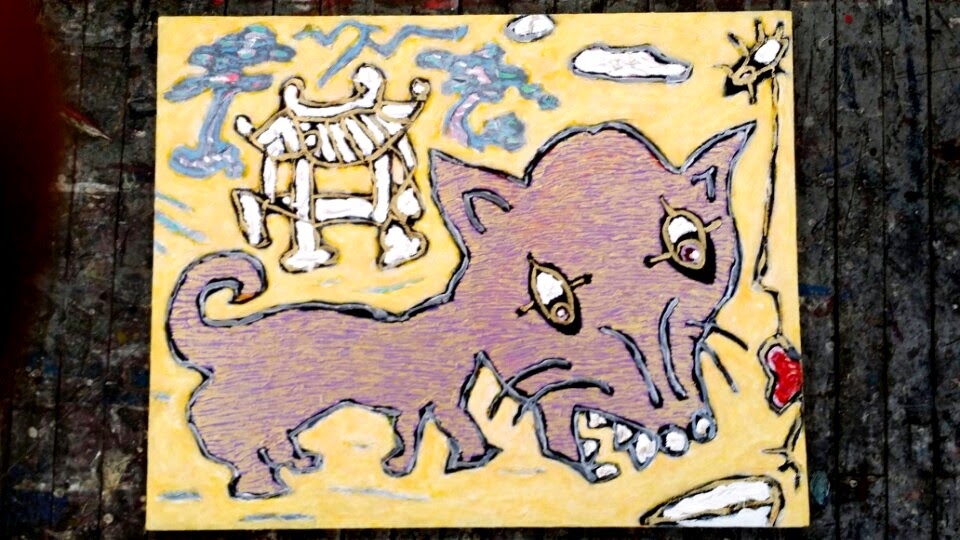 Heesoo Kim lives in New York City and seems to be following in the Art Brut tradition of presenting child-like drawings/paintings.  Yet, unlike a lot of art brut work, Kim’s stuff is very engaging, bright and optimistic.  This work takes delight in New York City life where, to the newcomer (I am now a grizzled, disgruntled veteran), everything radiates excitement, novelty and passion.

Inbu Pyo’s work contains uncountable small pieces of paper packed together in small spaces.  Like the millions of people who live in a large metropolis the individual pieces of paper can be bent by the wind but not easily displaced.  To me the individual pieces of paper, being potentially moved in relation to the surrounding pieces, represents the communal emotional response often felt by city dwellers.  We are all packed next to each other, we are all connected via TV and the internet, and every world event or crisis has the type of ripple effect of the wind. We all bend and move together – we are temporarily forced to respond, and we often respond uniformly, but resume our normal posture soon thereafter. 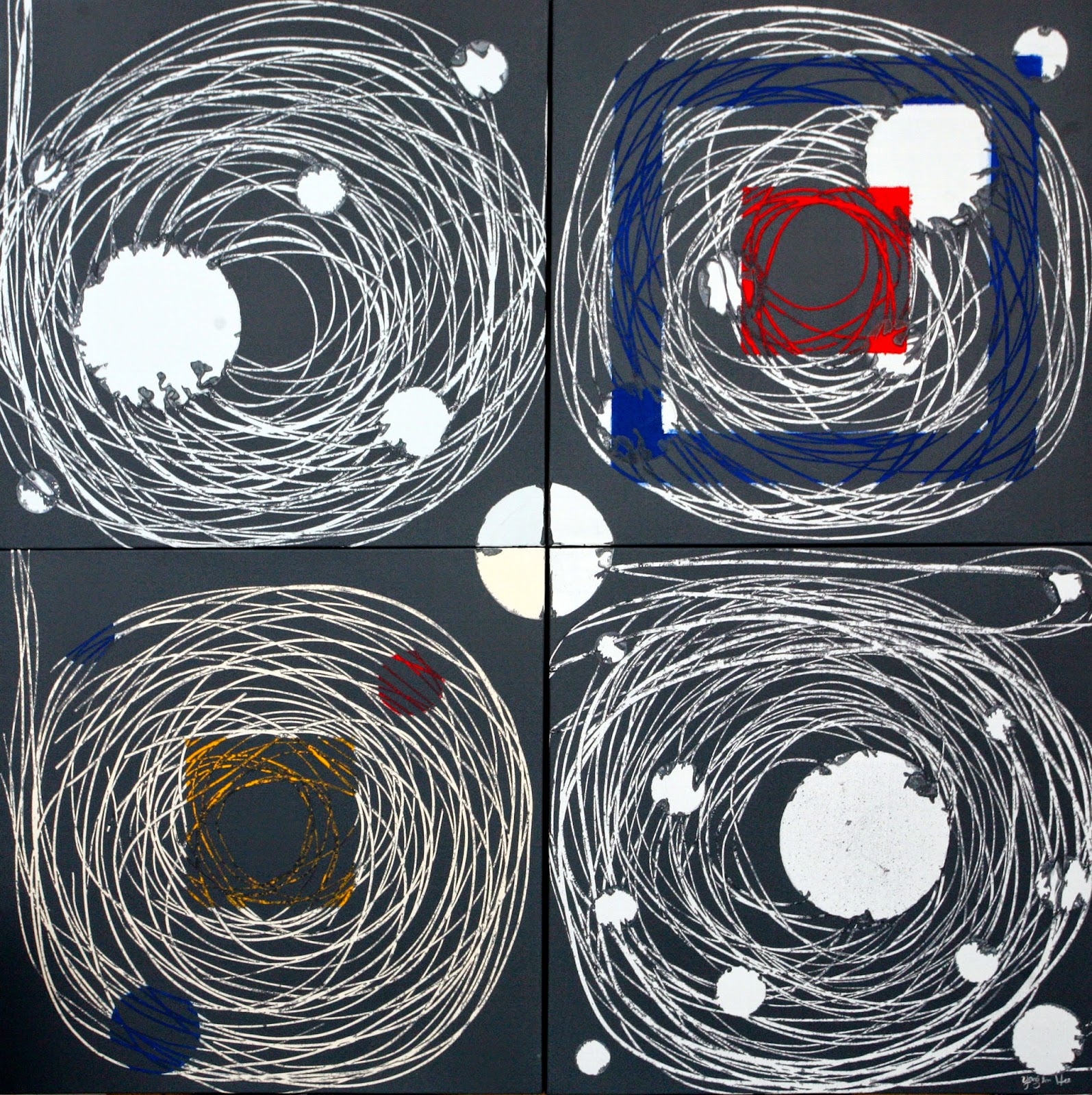 If we think of this show as being about the individual in New York City, Inhee Yang’s work seems to represent the permanence and transition that epitomizes the city.  You have strong, stable forms combined with circular lines which seem to imply continual motion.  The constant, apparently eternal forms are the city, or society, we are in the faint lines that intersect or go silently around these sun-like orbs that would seem to represent the structures and institutions that we need to acknowledge for our own survival within a huge social group.