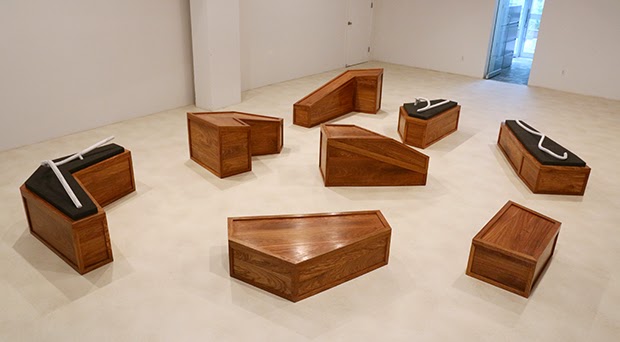 Chambers Fine Art and Francis Naumann Fine Art have teamed up to present some of Ai Wei Wei’s latest work, along with a good look at how Ai was deeply influenced by the work of Marcel Duchamp. Naumann also presents a thought-provoking essay on his gallery’s web site, asserting that Ai is more artistic than we normally think and that Duchamp was more political than we normally think. 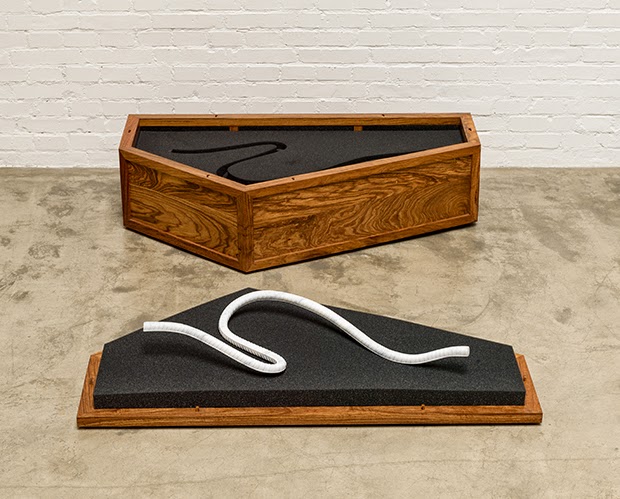 At Chambers we see several coffin-like objects that, apparently, contain marble sculptures of rebar – a type of reinforced steel that is often placed in concrete structures to give the structures added strength. Ai is referencing the Sichuan earthquake of 2008 in which between 5,000 and 10,000 Chinese school children died because of shoddy school buildings made of cheap material. The coffins are made of huali wood.  In some types of huanghuali wood the patterns often look like ghostly images (often the faces of ghosts), so the artist may have had this in mind while choosing the wood.  Yet, the huali used in this display seems a darker color, but still possesses the complex abstract patterns the wood is famous for.  This type of wood also seems to have had medicinal functions in the past and through over-usage seems to be rare (driving up the price of furniture built of this material in the past). 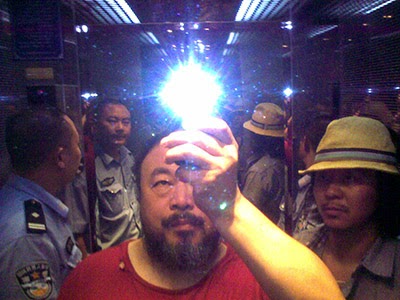 So why put marble versions of rebar in coffin-like structures? To me, the implication seems to be that corruption is never challenged until a tragedy occurs. Only then is the evidence collected, the culprits thrown in jail, and the shoddy stuff put away and buried to finally be replaced by the good stuff.  It seems beyond our abilities to think that integrity and good government should just naturally exist – and that something is horribly wrong if it doesn’t exist (and the world would be quantum leaps better if it did exist). Instead we seem to adopt the principle that if it ain’t broke, don’t fix it. Sure my representatives in D.C. and Albany might be as legit as a 3 dollar bill, but the sky isn’t falling, nothing is apparently going wrong, things seem to be going fine according to the newspapers, so things are OK.  But, when the stuff hits the fan and something suddenly goes horribly wrong, because there has been so much corruption and so much inefficiency for so long, then everybody self-righteously points fingers, heads roll, things suddenly change, time goes by and then we go right back to normal.  I like to view Ai’s work as applying to any society, not just Chinese society, where the current government, to try to be as fair and as objective as I can be, has declared a concerted effort against the types of corruption that lead to this horrible tragedy. 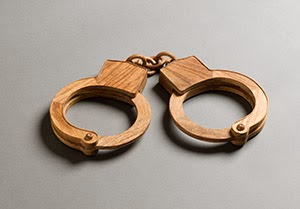 Why marble and not the real rebar (which Ai literally purchased and used in other art pieces) and why are the coffins not shaped like real coffins?  I am guessing this shows Duchamp’s influence. Duchamp made functional stuff non-functional to encourage a more figurative or symbolic interpretation of objects and relationships between objects.  A stool implies rest. If you invert a bicycle wheel and screw it to the seat of the stool, you now have a stool you can’t sit on and a wheel that can’t move forward. But by combining the concepts of rest and motion, (a modern version of the contraposto) you create an impression of something intangible, perhaps, inner motion. In the Naumann show we clearly see how Ai was influenced by Duchamp.  He has one bicycle inverted onto another to make both useless, he has little wooden stools joined together at odd angles to prevent anyone from sitting on them, and he has fancy looking cowhide covering part of the blade of a shovel. 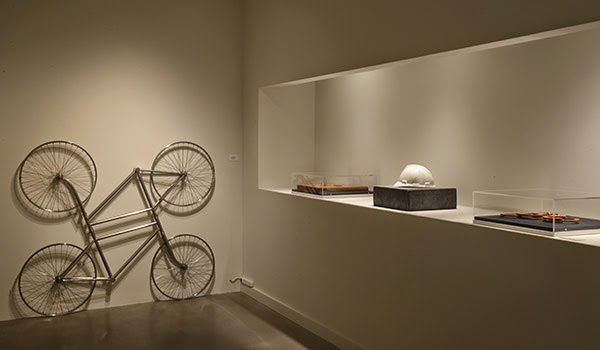 Naumann suggests that Duchamp’s art was embedded within an overarching belief in the freedom of the individual and non-complicity with evil. During World War I, for instance, Duchamp left Europe for America and when the US entered the war he went to a different neutral country (Argentina).  He seems to imply that Ai Wei Wei’s art begins not just with the idea of the ready-made but also with an underlying ideology which might be imputed to the ready-made.  Ai’s work seems more targeted toward his society’s government than Duchamp’s implicit blanket attack against conformity and state aggression, but the big point seems to be that it wasn’t just the 12 years in America that turned Ai’s head around, it was also his discovery of Duchamp over here.

If I may play devil’s advocate, I think the irony of all the attention being given to Ai Wei Wei is that in a ‘free’ society we have pressing and tragic social problems as well, but no real Ai Wei Weis come to mind in the US art world.  Sure we had the (amazing and creative) giant black lady/sphinx made of sugar, but that documented an evil from the past. People smiled and took cell cam shots with it.  But where’s the contemporary outcry in the art world against the fact that 1/11 black men will probably do jail time in their lives? Our artists don’t see inequality, poverty, conformity, empty consumerism, mindless competition etc.? Or if they do see it, they seem to gently mock it in an amusing manner. Who knows, maybe all the Ai Wei Wei furor will create a nice type of feedback loop. Ai was ‘radicalized’ by discoveries he made in the USA and he took them back to China. Now, perhaps, due to his influence and popularity, more American artists might be influenced to do more ‘in-your-face’ work about the stuff that needs to be changed here. 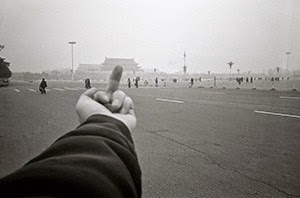 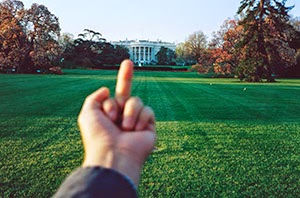 {{{photos from Naumann - Ai shooting the bird at Beijing and Washington}}}
Posted by Daniel Gauss at 9:53 PM