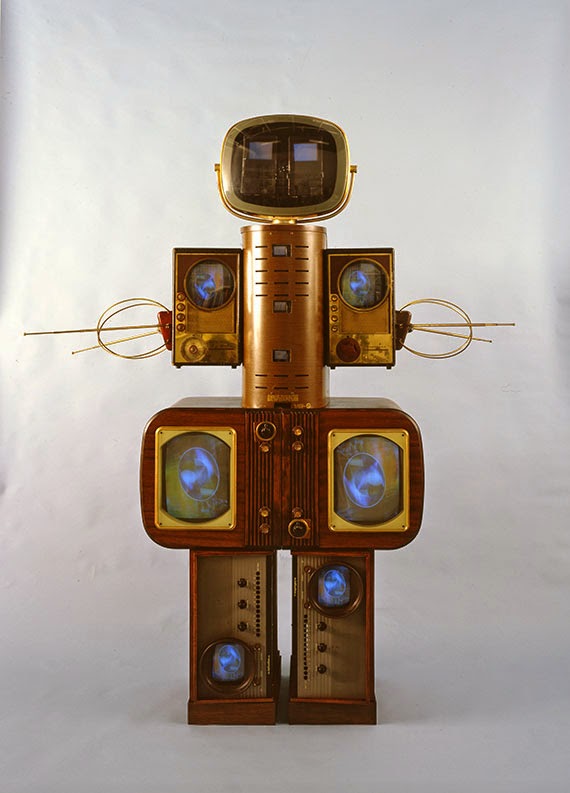 Nam June Paik was a pretty lucky guy. He was, for instance, able to move out of Korea at the age of 18, due to his family’s wealth, thus avoiding the Korean War.

While North Korean People’s Army divisions barreled through South Korea, while MacArthur landed at Inchon, while US forces temporarily occupied Pyongyang, as Republic of Korea forces were wiped out by Mao’s guys at Pukchin, as US marines and soldiers got surrounded at frozen Chosin, as Truman booted MacArthur for being a nut, as Syngman Rhee won another fixed presidential campaign,  as guys died on Pork Chop Hill (watch the Gregory Peck movie, it’s damn good!), and as an agreement was reached at Panmunjom, Paik was apparently continuing his musical studies in Hong Kong and Tokyo.

In 1956, as people in South Korea faced starvation and dire poverty, he received his university degree from the University of Tokyo. Now, I swear, I’m not judging – I asked a Korean friend whether Koreans felt that Paik had somehow shirked his responsibilities and she said, “No. God bless anyone who was able to get out of the Korean War.”  I guess the fact that he got out through wealth and privilege, while others suffered, does bother me a little, but let me stop judging and refocus on art. I mean, when you review art you’re not supposed to talk about privileged backgrounds (or we’d have to burn down all the art museums in the world) so let’s just drop the issue entirely. Sorry. 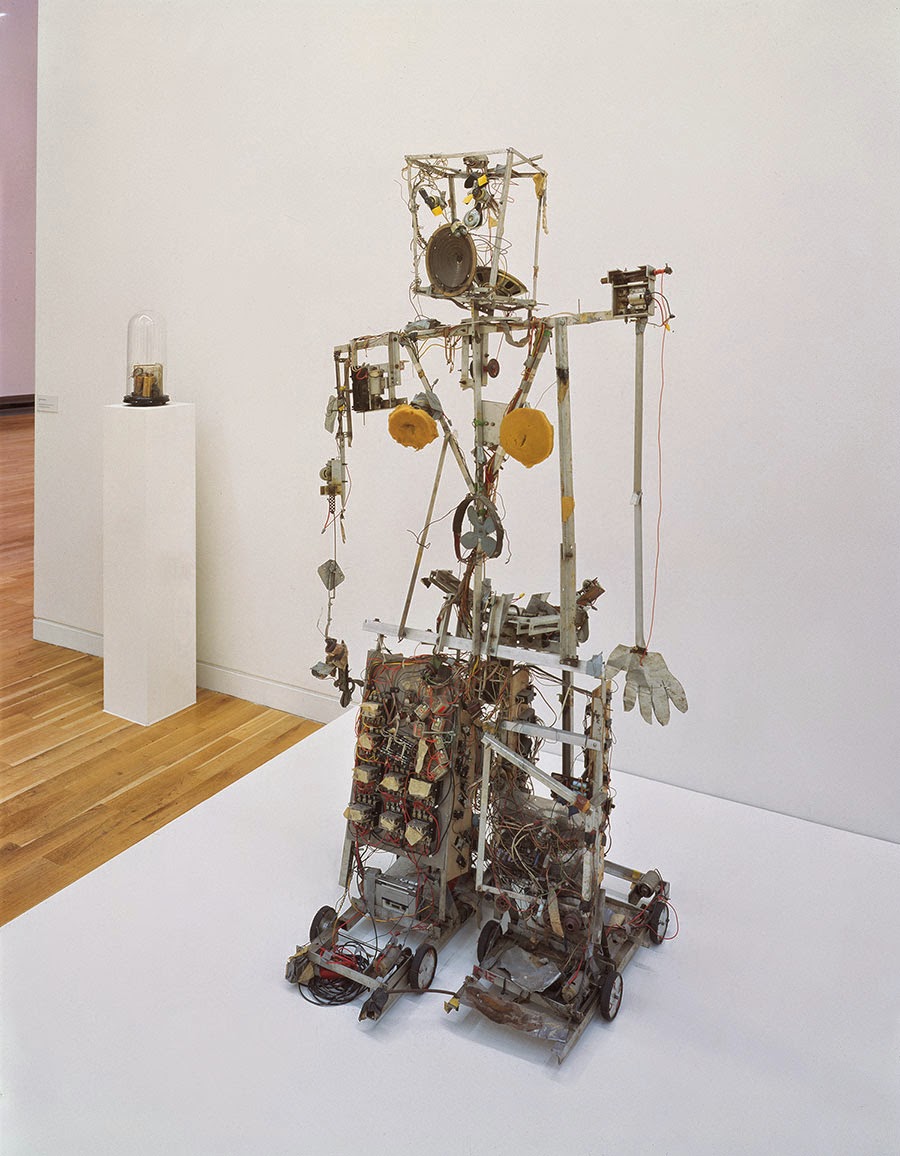 In fact, good for Paik! He missed the carnage of the Korean War. I wish all of the 2.5 million people ‘officially’ killed and the 10 million ‘unofficially’ killed had been so lucky.  Maybe the next time there’s a war we should just send money to everyone involved so they all can leave their homelands to study music abroad.  Can someone please start a kickstarter account for the people in Iraq, Syria and Gaza? 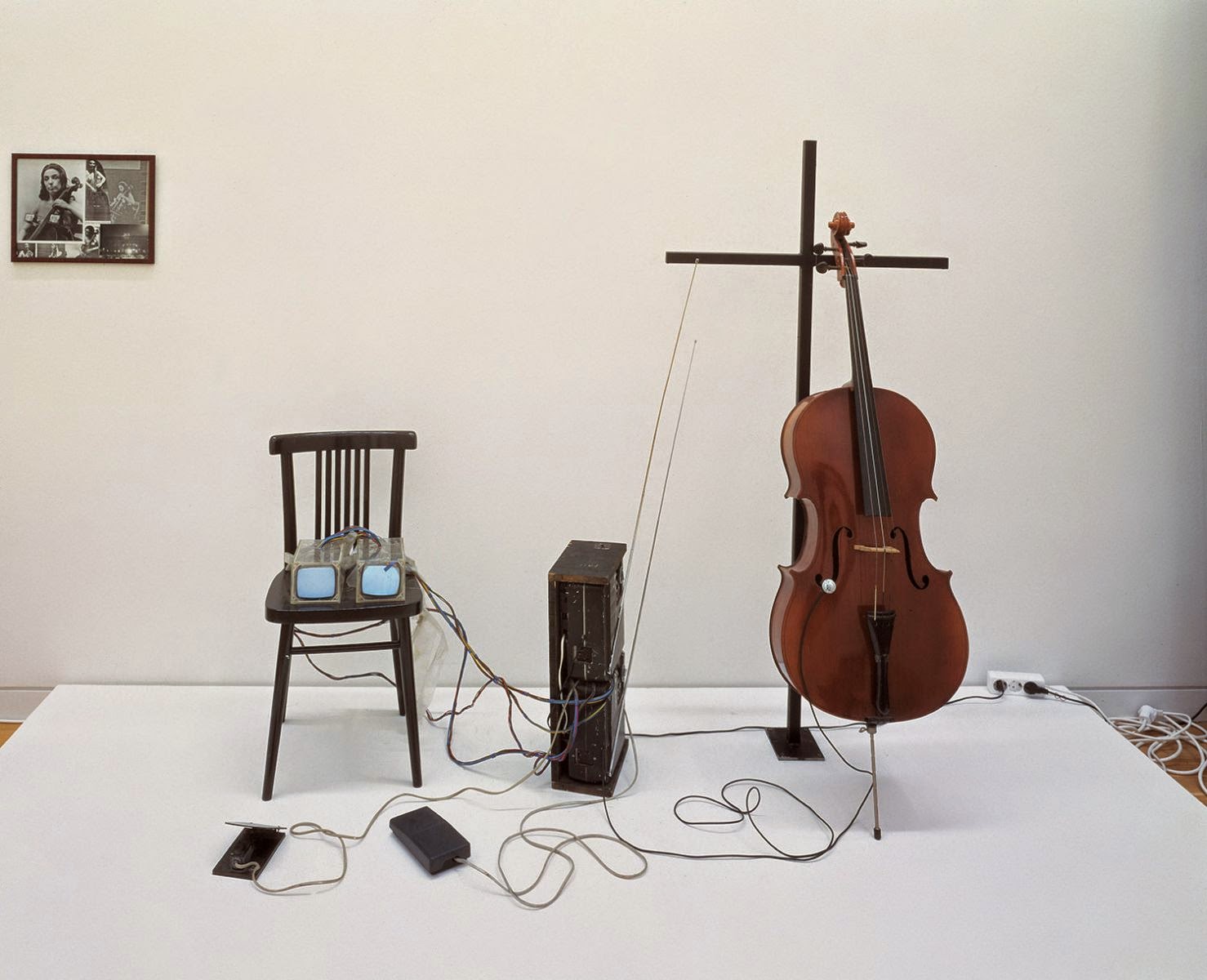 But, seriously, the current show at the Asia Society takes an overview of Paik’s work from his robot of the 1960s to the TV sets he decorated in the early 2000s just before his death.  Michelle Yun did a yeoman’s job of not only bringing together Paik’s original robot, paraphernalia involved in his performances with Charlotte Moorman (her TV bra, for instance), and his later family of robots, but there is also a tribute to Charlotte Moorman, some cool videos of some of Moorman’s provocative performances, and some interactive features as well.   For instance, in “Three Camera Participation” you enter a room and see that three colorful video shadows are created of you in two different places.  You can move around and create a psychedelic shadow theater performance of yourself. Basically it seems to be a work about ‘presence’ and the possibilities and limitations of video broadcasting. To a great extent a video broadcast leaves one party passive and at the mercy of the one-way engagement of the presence of the person being beamed out there. These cameras record your raw presence in the most flattering way, but real two-way engagement with the ‘other’ is missing. This short-coming in communications and entertainment technology has been addressed through the internet of late. 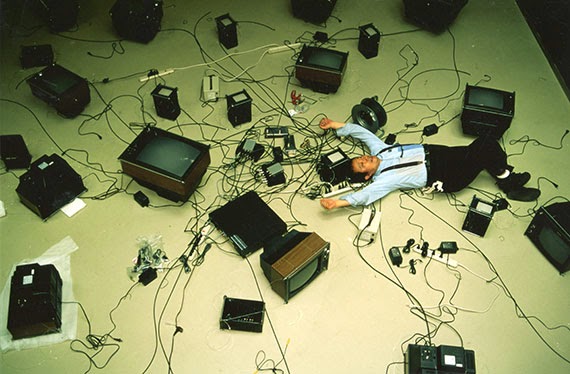 The show highlights Paik’s optimism about technology and seems to indicate that he wished to see a merging of the human and technological as a way to enhance and heighten the human experience.  His robots that are made of TVs become his ideals as we literally see communication technology taking a human form.  Yet I think a flaw in Paik’s work is that he seems to have failed to see the horrific problems that we are now encountering now that technology has become more deeply ingrained in our lives.  He did a world-wide video presentation on January 1, 1984 (the video of the presentation is there at Asia Society) mocking the concept of Orwell’s Big Brother, yet, the US government can read any piece of email you write at any time. Hackers can easily get into anything you have. The internet has become tainted as a cesspool of false, misleading, defamatory and maliciously inspired information facilitated by irresponsible giant corporations. Did Paik fail to see this coming? Was he naïve in his assessment of the benefits of technology? His work also (unless I am missing something – and I could well be) strikes me as too ‘one-way’ and too ‘broadcasty’, not addressing the need for two-way engagement, the need to protect privacy and reputations and ways to facilitate this meaningfully through technology. Did his obviously privileged globe-trotting life limit his vision and his capacity to see how technology could truly have benefited humanity and how it might be harming it currently?

So drop by the Asia Society and see this pioneer of video art and judge for yourself. Every other review of this Paik show has been quite laudatory, so I thought I’d throw in a dissident viewpoint. There’s no doubt, however, that the Asia Society continues to present thought-provoking and valuable shows, this being one of them. Please don’t forget that they have free Friday nights from 6 to 9pm  and this is a nice time to drop by.