The "Alter Egos" of Mark Beard at ClampArt in Chelsea

Several months ago I wandered into ClampArt on a Saturday afternoon and saw that the gallery was primarily filled with large homo-erotic oil paintings attributed to Bruce Sargeant (1898 – 1938). There was also a nicely sized collection of his apparent mentor, Hippolyte Alexander Michallon (1849 – 1930). Sargeant’s work seemed more interesting to me, however, as it was a strange cross between hyper-realism and expressionism.  The young male bodies were lustily detailed (as only a true lover of male flesh could accomplish) but the skin tone was often a rough blending of flesh tone and grayish green. 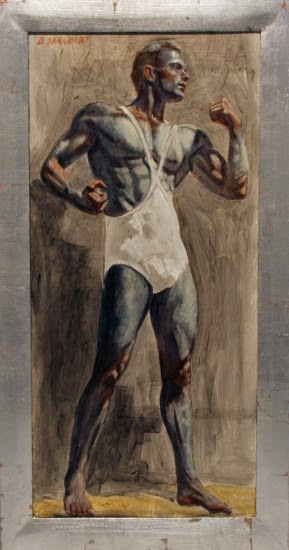 There was such an over-the-top, seething love for the male body, merged at the same time with an apparent pessimism toward the flesh, and overall sense of dread, that I was amazed I hadn't seen this person's work in various museums.  How could the work of this obscure genius have been overlooked? But, when I wandered over to the desk at ClampArt and asked the owner of the gallery why Bruce Sargeant was not to be found in museums, he let me in on the "secret."  Neither Sargeant nor Michallon had ever existed. Mark Beard (a contemporary artist) has created his own series of fictitious artists. He paints in several different styles, purporting to be fictional artists from the past. In the show I saw, there were 'new' paintings by the 'dead' artists Michallon and his disciple Bruce Sargeant. 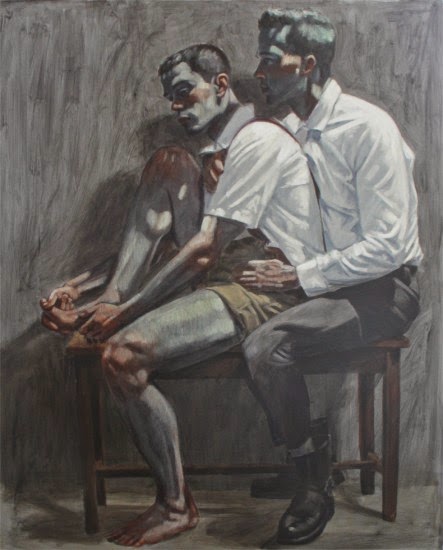 I was a little disappointed to find that at Beard’s latest show, at ClampArt, the gallery has given away the secret. The current show is titled “Alter Egos” and includes 7 of Beard’s artists, including Buggereau (whose work might represent Beard’s own stuff) and his latest incarnation: Princess Ormalu (B. 1979). A very kind gallery assistant informed me that, basically, ClampArt had little choice – the jig was up. By now most folks in the art world have discovered the secret, so now it’s on to transparency. 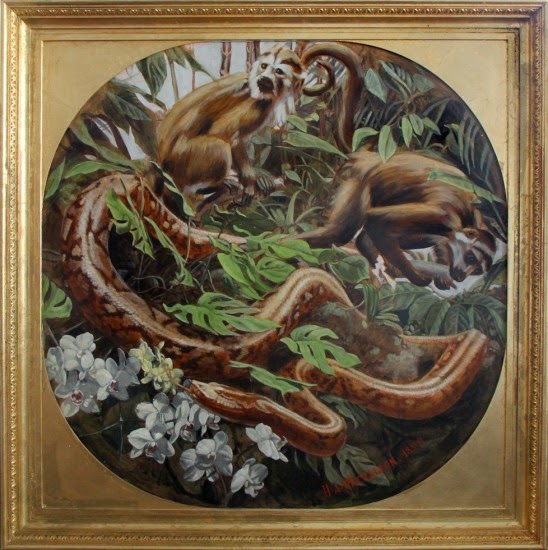 So why is he doing this? On one level he could be parodying trends in art, or the process of how artists become famous – how they get 'selected' to be great artists. All of Beard's fictional artists stick to one style of painting and this style becomes their 'brand.'  You can recognize a Michallon from a Sargeant from a Steeruwitz easily.  Branding your art becomes essential to success.

People need to look at a piece and immediately say, "That's a Koons!" or "That's a Pollock!"   Beard seems to be pointing out (from what I've read) that, in the past, artists often went through various developmental stages and experimented with various styles. Now, to feed the needs of the art buyers, you develop until you hit something new and then that's that - that's YOUR style.

There's no further need to develop - you are at the place you need to be. Now produce, produce and produce some more of the same stuff and start smoozing it up to promote yourself.  But, if Beard is mocking artist branding, his mocking has now become his own brand.  Yet, by including the work of Buggereau, he also seems to be showing that he can stand on his own and create a unique and engaging style to convey something personally meaningful. 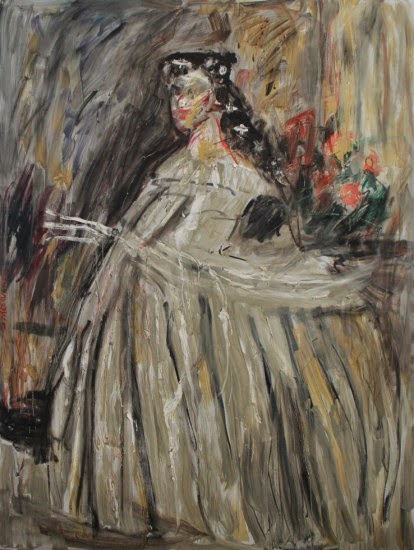 A very funny aspect of the show, however, is that we see that if an artist cannot create a style for himself, it’s always possible to freeride and just hop on the stylistic bus and imitate.  Brechtholdt Streeruwitz is painting in the Abstract Expressionist style while Peter Coulter has totally stolen a type of Jenny Holzer/Barbara Kruger type of word art.

Walking into ClampArt for this show, I immediately realized I was looking at art by a gay man.  Indeed, there was no denying that Sergeant was flaming.  Beard goes way overboard in conveying this.  Indeed, the pessimism reflected in the greenish tones or in the paintings of young men attempting violent suicide might be interpreted as a response to the outright hostility toward gay folks during that time.   Beard, like a type of novelist, creates a gay artist working during a time when homosexuality was considered a mental illness and when you could probably get lynched for being gay.  We see the work of a conflicted person - he cannot help but express his true nature, but it is expressed dolefully and fearfully. 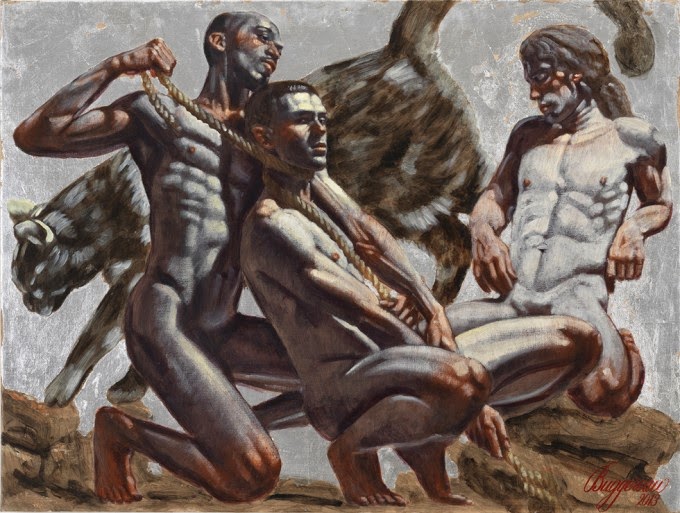 So here's where I think I get Beard's real joke.  When we go to an art museum, we don't think, 'Oh I'm going to go see the sensual obsessions of the socially-repressed and anxious homosexual Michaelangelo.'  Nor do we think, "Ah, I wanna go see the unresolved sexual conflict that artist x lived with his whole life."  You expect to see 'art' but sometimes the artist presents something a little more (or less) than art on the canvas and he (she?), apparently can't help it. The ‘dirty’ stuff just pours out. 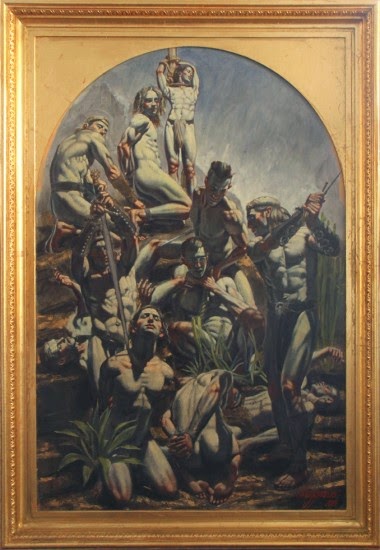 So you've got sexual conflicts, concerns, obsessions and anxieties on canvases all throughout the history of art (Guido Reni's St. Sebastian?  Any St. Sebastian!? Looked at anything by Caravaggio lately? Munch's women as 'vampires?' Picasso's Les Demoiselles d'Avignon? etc.) and people often don't even recognize this.  Indeed, if Sargeant had been a 'real' 1930s artist, unknowing, non-gay-friendly critics of the time might have missed the obviously gay orientation completely.  The focus on virile, rippling young men would have been interpreted as the artist's emphasis on American strength of character or the virile, male brawn that will pull us out of the Depression.  Or, maybe Beard is pointing out that you are only going to get this type of art during periods of oppression for gay people. If folks could openly experience their sexuality and represent it freely, you wouldn't get it in such a sublimated form on canvas. 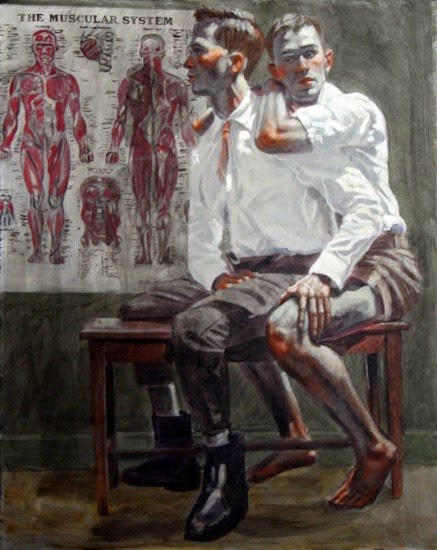 We don't think of some of the German expressionists or the surrealists as working out their heterosexual and/or sado-masochistic demons on canvas, we consider this great art. I think that's the big joke Mark Beard is telling (at least with Sergeant).  Art has always been a canvas for the exploration of the artist's own sexual inclinations, anxieties and development.  Sure a lot of art is meaningful in a non-sexual manner.  But there's an awful lot of sex stuff that people are (deliberately) not catching.