Sculptures by Donatello at The Museum of Biblical Art in Manhattan 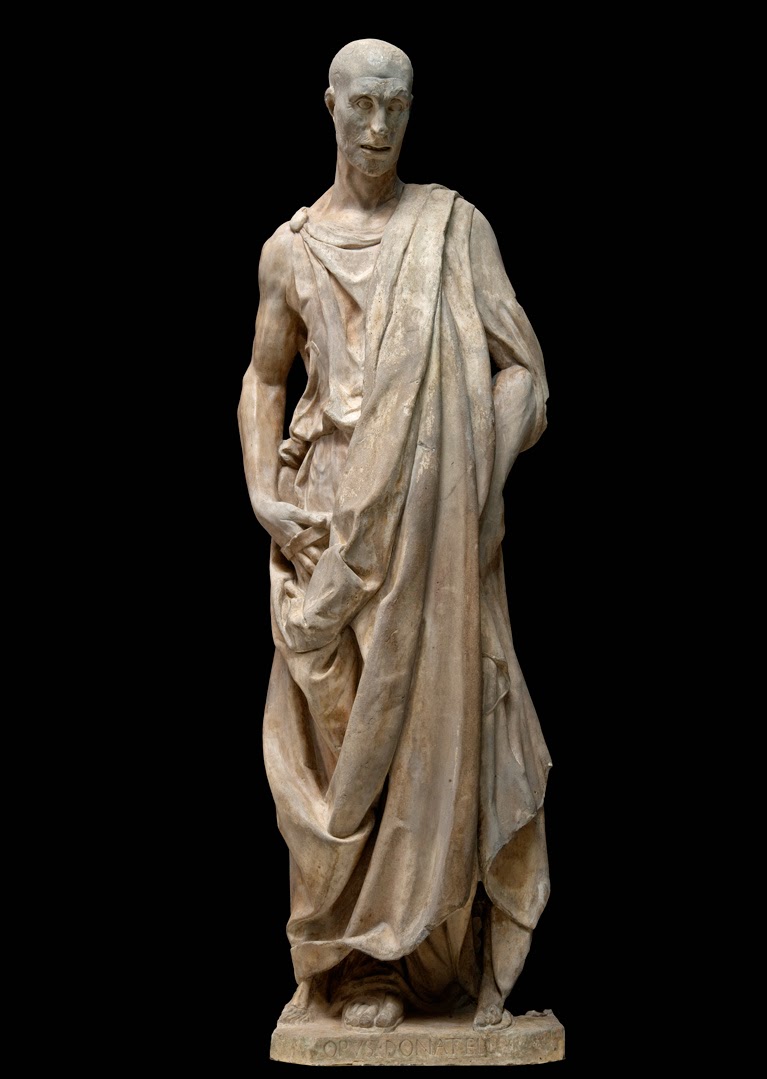 Your priest or minister may not have told you this, but many religious scholars believe that Paul of Tarsus hijacked Christianity. At one time in the very, very early stages of the Christian religion there were actually two rival groups of Christians (this is even before the Gnostics reared their heads). There was a group of early followers of Jesus based around the core group that had known him. They placed Jesus within the Jewish tradition and focused on his message of ethics and personal transformation. Paul was the more cosmopolitan visionary outsider who had never met JC but who fused foreign concepts into the Bible story – especially the concept of the ‘forgiveness of sin’ through the sacrificial crucifixion and resurrection of Jesus (‘In him we have redemption through his blood, the forgiveness of our trespasses…’ Ephesians 1:7).  Jesus’ own guys, with Jesus’ original teachings, were slaughtered when the Romans conquered and obliterated Jerusalem in 70AD, leaving Paul and his guys – who lived and preached outside of Jerusalem  – as the only ones left to spread the religion. They spread their message and their interpretation of the significance of Jesus. The crucifixion was central, the teachings of Jesus were peripheral. 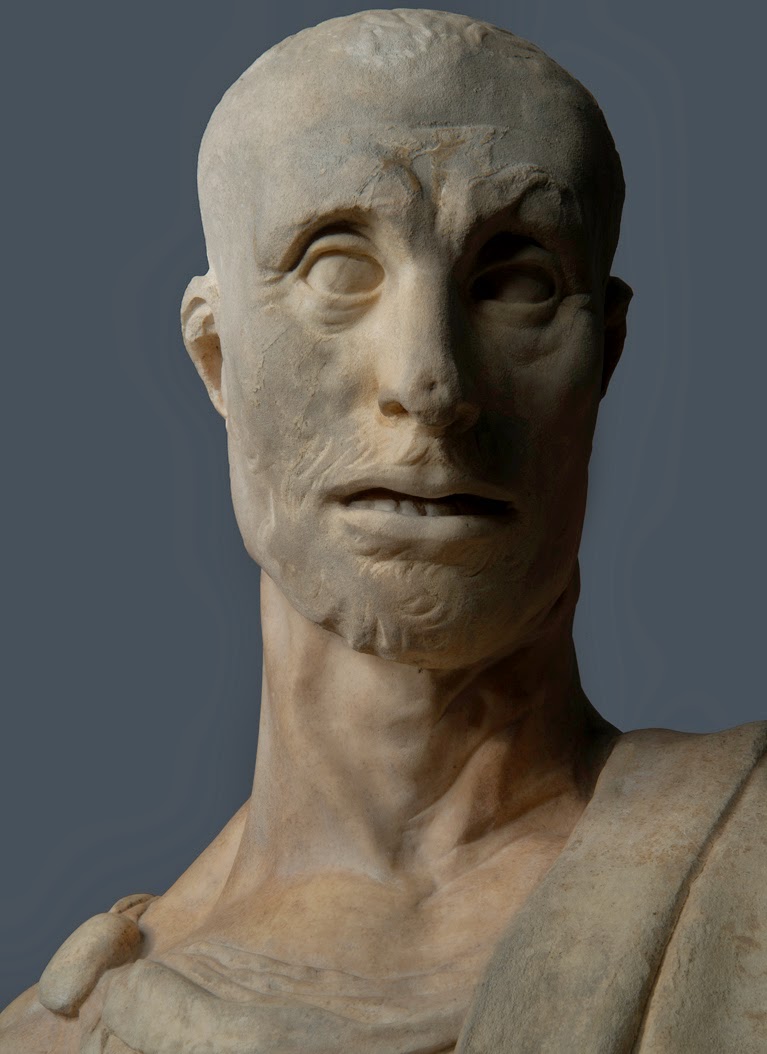 The Middle Ages belonged to Paul, but the ‘word’ still existed in the preserved texts of the Bible. Among other things, the Renaissance became a time when stuff that had been ignored was actually read. More than anything, I think that these works by Donatello at MOBIA show an engagement either with the ‘word’ of the actual mystical and ethical teachings of Jesus (after folks began to look beyond Paul and his Readers Digest  message of Christianity) or with the word of God in general. These are pieces that show individuals who finally ‘get it’.  We see them reflecting the significance of ‘the word’ (λόγος) – we see them moved by a realization that what they have seen, written, read, heard or experienced is of the greatest possible meaning to humanity.  We see people beginning a process of self and societal transformation based on an awareness of an inner process engendered by experience from without. In the best pieces at MOBIA we see figures who have engaged the teachings of Jesus or the word of God directly on a deep level and who exhibit the actual physical signs of absorbing the significance of the message. 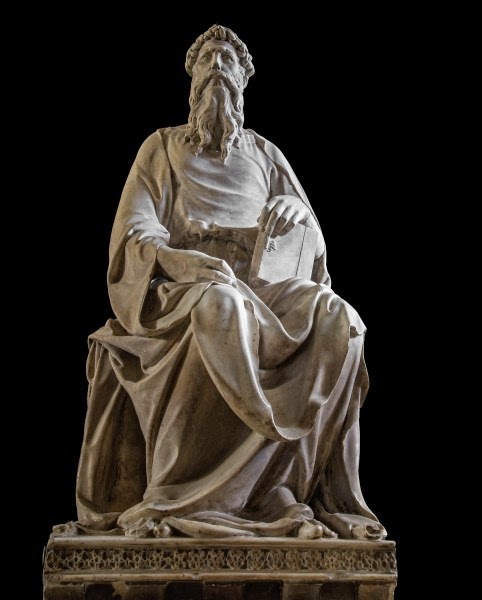 Take ol’ zucchini-head for example (folks called this sculpture of a prophet ‘zucchini head’ because his head kind of looks like a zucchini – and I can attest to this because I saw the show on Saturday and just came back from my supermarket – yes, indeed). This sculpture depicts a pre-Christian prophet. We see a guy who has probably been influenced by ancient textual material and whose prophecies come from a deep understanding brought about through the fusion of sacred text, experience in the world and spiritual insight brought about through engagement of the word. Go to MOBIA and stand in front of this prophet and you’ll feel the intensity and presence of someone who has engaged something of consequence and who needs to share this experience, for the right reasons and for the benefit of others. 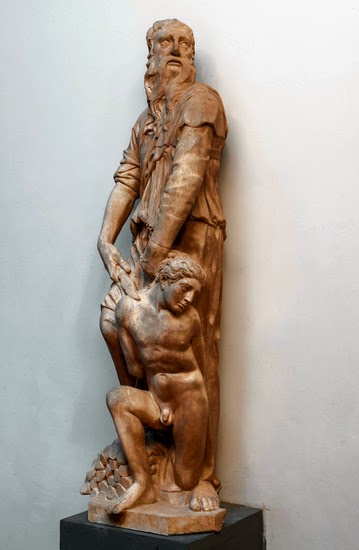 The story of Abraham and Isaac has always baffled me. I guess the best interpretation of the story I ever came across was that Abraham had put his desire for procreation before his desire to love and serve God and would have lost his son had he not done a quick reversal. When his priorities were finally straightened out, the sacrifice did not have to occur. As a Rabbi once told me, however, one big difference between ancient Judaism and other religious practices in that area of the world involved infant sacrifice. This Rabbi even pointed out that the philosophically brilliant Greeks often casually left children to rot on mountain sides. So I like a more historical interpretation to this story – I think Abraham/Isaac points to that momentous time in history when a society finally placed human life above magical/religious ritual and when the Jewish religion formally eschewed the deaths of babies to bring about better luck for others. Get close to the face of Isaac and look up at Abraham. You see the moment just before the engagement between Abraham and the higher concept, the moment just before the birth of a compelling moral imperative. It’s a deeply moving piece as if Abraham is half-obeying, half-beseeching but is now open to the deep influence of God’s word. Isaac has also placed his trust in his father and you see a look of stoic bravery on his face. 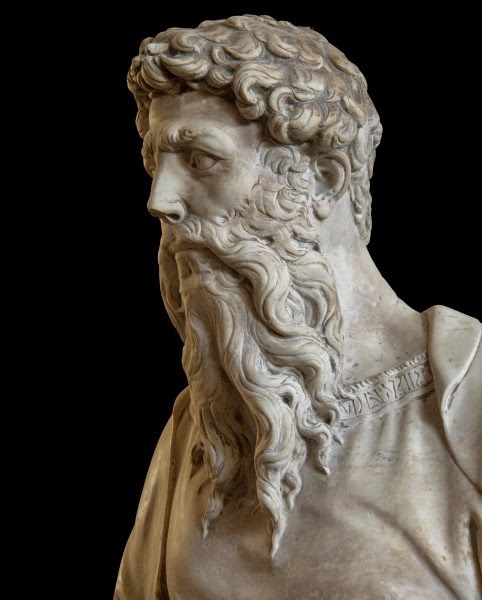 The other huge piece by Donatello here is his St. John the Evangelist. He sits next to Nanni de Banco’s Saint Luke, who seems consoled by the text he has written and holds on his lap.  Donatello’s St. John, however, looks solemn but eager, aware of the deep significance of the text he has created. The Gospel of John is the most mystical of the Gospels, it’s the gospel with the story of water turning to wine and the gospel that more than any other broadcasts the possibility for inner change and transformation. Luke is content while John ponders the effect the word has had on him and the effect it can have on others, if they can become open to it.

This is not a show of historical stuff; this is, in fact, deeply meaningful work which affected me on the deepest possible personal level. It confirmed my belief that the truth of the Christian message is real – not Paul’s truth, not the Church’s truth, but Jesus’ truth. The word is real – it has a real effect that can be captured through art. It has affected those before me and it will continue to affect others. Peace is possible, kindness is possible, real love, forgiveness and tolerance are possible; water can be turned into wine and life can be a celebration of joy and goodness. Donatello has always been one of my favorite artists, but after seeing this show and engaging his pieces directly I wish I could reach back through time and just hug the guy, just to say, “Thank you so much, this stuff was so amazing – thank you for creating this.” In lieu of Donatello, if I ever see Richard P. Townsend, the Director of MOBIA who brought the show here, maybe I’ll try to give him a hug.


(The admission fee is worth it.)
Posted by Daniel Gauss at 6:24 PM