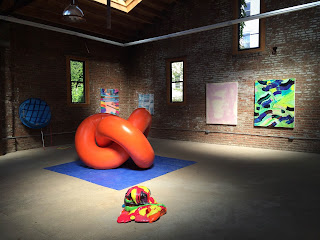 {{{click on images to enlarge - sorry I only have installation shots}}}

If you were to think of songs associated with the labor union movement or various union strikes, the songs of the prolific union activist and songwriter Joe Hill might come to mind. Once, when a company hired a Salvation Army band to play loud enough to drown out the chants of strikers, Hill simply wrote pro-union lyrics to the music the band customarily played, and the strikers were able to sing along to the music, loudly expressing their anti-management sentiments. Other than the work of Joe Hill, union classics might include: Whose Side Are You On?, Bread and Roses, Solidarity Forever…but, did you ever hear of De Colores? 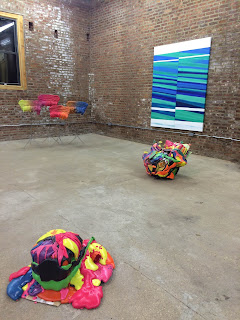 If you started your Bushwick Open Studios walk from the south, you might have come across the Buggy Factory, which was one of the information hubs. At the Buggy Factory Enrico Gomez curated a group show of seven amazing and accomplished artists around the theme of De Colores, which was a song commonly sung during the darkest days of the United Farm Workers Union’s attempt to secure justice for migrant farm workers.  It’s really not exactly the type of song you’d expect at a labor union rally as it is a song which praises the colors of nature and the joy these colors bring. It’s a Spanish-language folk song with religious undertones, with early versions that can be traced back to the 1600s.

So the song De Colores was sung in response to the callousness and greed of the farm owners and the hatred directed at Cesar Chavez, Delores Huerta and the workers and families of workers they represented. Singing the song was a way to refrain from being engaged on the possible level of malice created by the situation and to direct one’s thoughts elsewhere while the UFW endured and until everything could be resolved. Instead of being worn down and torn down, the farm workers refused to return hatred for hatred and replaced that with the serene emotions engendered by the beautiful De Colores. Like the song De Colores, upon stepping into the Buggy Factory's amazing exhibition space, one was engaged and uplifted by thought-provoking work incorporating a variety of colors and forms by the following seven artists: 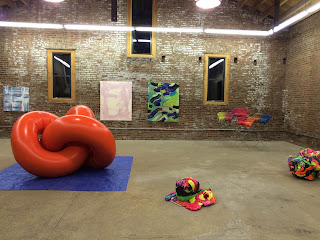 If you’ve seen any colorfully painted cement mixer trucks around Bushwick or environs, that was probably Andrea Bergart’s idea. After spending time in West Africa, where artists paint on almost anything, apparently, she floated an idea by a cement mixer truck company and they allowed her to create various designs on some of their trucks. For the De Colores show, we see the same type of clash of strong and bright colors that Bergart seemed to be influenced by in Africa, where the colors and designs of clothing often add a contrast and uplifting element to bleak environments.

From Ben Godward’s website it seems that his art of accretion is a response to our ‘slick, saturated media’ and references things from sex to food to toxic sludge.  His work derives from a culture of ‘material excess and imperial gluttony’ where ‘Pure carnival joy harmonizes unselfconsciously with commodity culture.’

Anne Russinof seems to use a wet-on-wet painting technique in which she – from what I have gleaned from her web page – uses gestural, abstract expressionist techniques accompanied with a more minimalist concern for structure.

The thick strips of aqua and white in the work of Jennifer Ditacchio seem to be derived from the natural environment and the artist herself once pointed out that she has deeply influenced by the light and colors of the Cape Cod landscape where she grew up.

Denise Treizman is a native of Chile who did her MFA work at SVA. At one point started a program where the athletic shoes of Chilean national soccer team players were used to create art by various artists as a fund raiser for Chilean earthquake victims. According to her artist statement, her work often involves, ‘…informality, improvisation and new forms of abstract assemblage…’ from a process that embraces chance and uses whatever might be available.

In Doreen McCarthy’s artist statement she states that ‘My production often appears to present aesthetic oxymorons that occupy both sides of formal and conceptual oppositions such as material versus effect.’ In the centerpiece of the show we see one of her site-specific pieces - a curling and tube-like structure that I dubbed ‘the eternal sausage’ because it’s like viscera defying the laws of entropy with no beginning, no end and no production of waste.

Inna Babaeva, originally from Ukraine, tends to use industrial foam to stimulate thought about ‘mass production, recycling, function, materiality, gravity and time.’ Often the foam serves as a means to undermine the function of another object and sometimes the foam is allowed through chance operations to assume its own unpredictable and often absurdly ridiculous shape mimicking some type of organic form. 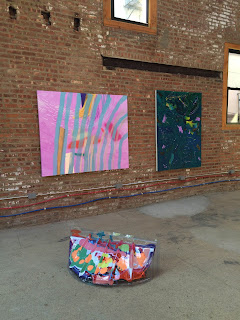 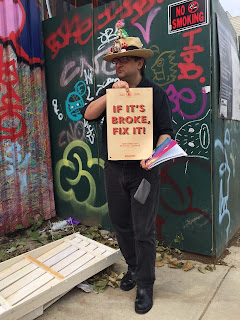 Daniel Gauss - the guy who writes some of the best art gallery reviews in the city.