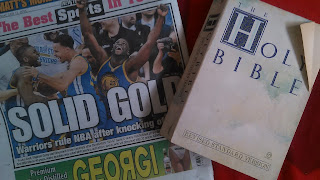 {{{click on images to enlarge - these are my own little collages}}}
So I started thinking and I realized that the competition involved in team sports is a type of struggle which really lends itself nicely to allegorical or artistic interpretation.  Team sports are all about creative movement in restrictive space toward a type of consummation or liberation against resistance. The defense represents a type of inertia to be overcome by the offense through deception, force or creativity. The offense represents (to the defense) a type of chaos to be minimized or controlled.  Every sport has its symbolism, every game becomes a Zoroastrian battle, every player is a type of wizard/shaman. 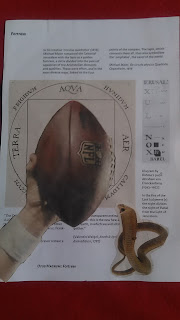 In baseball, the pitcher merely wishes to throw a white orb 81 times over a pentagon comprised of a rectangle and triangle in 9 equal sequences.  Inexplicably, a guy stands next to the pentagon with a stylized tree bough to interfere with this (nefarious? diabolical?) process.  This necessitates the creation of an ever expanding field of two geometrical rays from the points where the triangle and rectangle meet, and the field becomes populated by pitcher surrogates (teammates representing the pitcher). The pitcher must complete his arcane labor through mixing pitches of different speeds and styles, the batter must not let the pitcher succeed in allowing the orb across the pentagon too often and must deal with the duplicity of the pitcher’s attempts to get the orb over the pentagon.  The best hitters are the ones who most thwart the pitcher’s goal. The batter, obviously, sees something problematic about an orb crossing a pentagon, and attempts to prevent this as forcefully as he can. Initial interference becomes an element of control as the batter attempts to direct the ball into open spaces, hopefully beyond the wall created to stop the expansion of the geometrical rays. During this chaos of a bouncing, uncontrolled ball (which has been prevented from crossing the pentagon), movement, action and progress can occur. 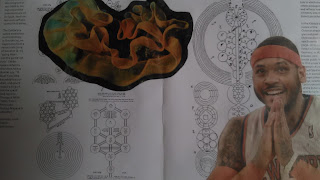 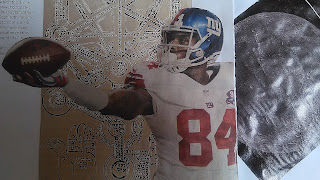 Did you know that in basketball, players, initially, were not allowed to dribble?  Basketball had been a game of merely passing the ball until one got close enough to the basket to shoot.  Players moved through space, found a position, received the ball and then either continued passing or shot.  Did you also know that shooting a rubber ball through a hoop to the ancient Aztecs was highly symbolic and they believed their ball games aided the passage of the sun through the sky? In any case, bouncing the ball to facilitate movement was the chief symbolic innovation in this modern game.  What does dribbling represent symbolically?  Oh come on! OK, I’m not sure either, but I guess you can contrast the pounding of the ball against the earth (wooden floor) with the sailing of the ball through a metallic hoop.  You pound the ball until the ball can sail in a controlled and directed manner toward a goal.  Does that make sense?  Sorry, that’s the best I can do.  So you can move the ball only by passing it and pounding it continually against the earth and the consummation comes from placing the ball through the abstract two dimensional figure from which a sphere originates when you roll one of the axes of the circle 360 degrees. 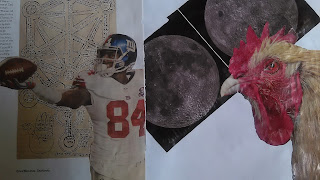 I guess you could go through all the team sports and find the common denominators – some type of geometrical object that has to be moved meaningfully in a controlled manner against resistance. Is this why people love sports so much, because of the underlying symbolism of overcoming resistance and achieving a victory of relief and liberation?  Probably not.

I made these silly collages to go along with my text. If you want one or all of these collages, drop me a line via email and if you are the first one to send me a message, I'll send you the collages via the mail, regardless of where you are.
Posted by Daniel Gauss at 1:01 PM