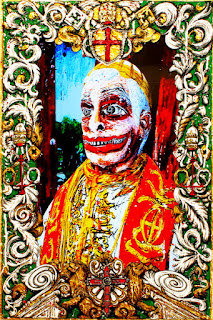 The last line of Heinrich von Kleist’s story ‘The Marquise of O’ seems appropriate to the subject matter of Federico Solmi’s dynamic new show at Postmasters Gallery on Franklin Street in Lower Manhattan: “…he wouldn’t have seemed like such a devil now if he had not tried so hard to seem like an angel.” In the ‘Brotherhood’ which Solmi satirically depicts for us, we see a rogue’s gallery of past world leaders who effectively utilized the tools of self-aggrandizement and obtained the willing complicity of the spin-doctors of their times as very potent elements in their ability to obtain and wield power, usually for their own ends (while purporting much higher social goals and purposes).  Yet Solmi also pointed out to me that his exhibit is not about the individuals in the show – Ratzinger, Washington, Napoleon et al. but about “…the way to obtain power, which is always very ruthless…” and the “…human weakness of the ruler.” 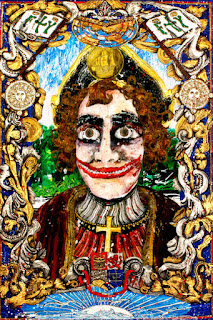 The methodology toward power of these past leaders can be readily applied to folks currently wielding power and influence. For example, we have a wonderful new pope, don’t we? Such a nice guy, so humble and sincere. Yet, news sources like the BBC and the New Yorker have reported that when he was in Argentina during the “Dirty War” (1976 – 1983), he supported the military junta responsible for the kidnapping, torture and death of over 30,000 union leaders, students, reporters, priests, nuns and basically anyone the junta wanted to torture and/or kill. If this junta kidnapped a pregnant woman, they wouldn’t torture her too badly – they’d wait for her to give birth, then torture her, kill her and sell her baby to a wealthy family seeking to adopt. 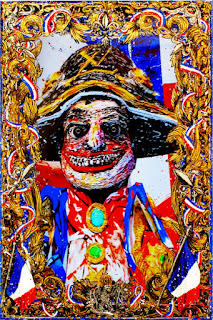 Bergoglio (aka Pope Francis) seemed to know all this but apparently kept silent and went along to get along in his personal quest for further power within the church. There is some evidence that Bergoglio, as head of the Jesuit order in Argentina, handed over two priests to the junta to be tortured and imprisoned for their allegedly pro-socialist activities. In 1981 the Pope everybody remembers fondly – John Paul II – met with the leader of that junta and publicly kissed him in a show of support for the butchery occurring in Argentina. As the bodies were piling up, Bergoglio did not, apparently, jeopardize his standing within the church organization of that time, which clearly felt that the only good socialist was a dead socialist. Unlike Bishop Romero of El Salvador, who spoke out against his state’s abuses and was murdered, Bergoglio did not protest against evil and is now the moral and spiritual leader of 1 billion Catholics. 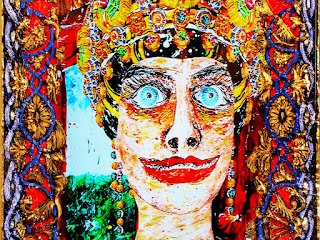 So Solmi depicts Pope Ratzinger in this show, but to me the image could stand for any of the recent Popes or maybe even the tarnished history of the papacy itself and its frequent willingness to be in complicity with the very worst of its time. We see an especially ghastly and sinister character - the kind of guy who might, like Ratzinger, not have been too concerned about child sexual abuse among priests, or maybe the kind of guy who would rat out a couple priests for torture or kiss a military butcher - riding around in his pope-mobile, fake, skeletal, death-like smile plastered on his face, practically seething with greed, corruption and lust for power and fame.  Solmi’s images of these leaders of the past calls to mind the images of church and state figures George Grosz used between the World Wars but the sarcasm and contempt Solmi feels for these Brotherhood characters seems even deeper and more passionate than what Grosz evinced. Grosz responded to corruption and hypocrisy with severe and denigrating satire, but Solmi seems to demand change. He wants to flush these guys out and reveal these leaders for what they were, thus pointing to the guys/women who currently are doing the same thing. He seems to leave it up to us to make the connections between past and current leaders. 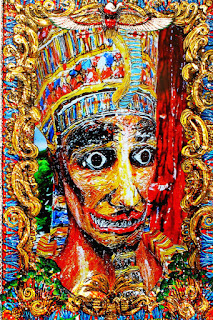 It’s amazing, in fact, what great PR corrupt politicians, inept leaders and human monsters can have. As someone who has lived in two hotbeds of American corruption - Chicago and New York City - it’s always amusing when the federal government arrests a local politician who just a few days previously was riding on an amazing reputation generated by all aspects of the local media. Following, perhaps, in the tradition of Gramsci, Solmi finds value in exposing the cultural hegemony that lionizes corrupt, evil or incompetent people (short or long term) like Napoleon, George Washington, Christopher Columbus, Montezuma, Empress Theodora, Idi Amin, Genghis Khan et al. This lionizing process is essential in maintaining corruption and social control. 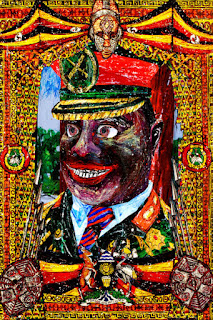 What’s wrong with George Washington, you might ask? Well, he sucked so badly as a general that he lost most significant battles, including one where half his army was captured and shoveled off to English prison ships where they basically starved to death or died of various types of horrific illnesses. “But he won the Battle of Yorktown!” you might say…no, my friend, the French King orchestrated the Battle of Yorktown using 5,000 French soldiers and his own navy; George went for the ride and took credit afterwards. 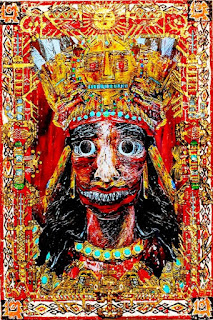 So it’s the process of first covering up all the faults and flaws and errors of the person followed by the deliberate elevation of a rather mediocre human being to mythic status that Solmi gloms onto and viciously parodies. To Solmi The Brotherhood is an organization made up of the rich and powerful who have had the goal of maintaining ‘chaos in the world’ while aspiring toward ‘the degeneration of the human race’.  In these ‘animated’ paintings, “created with Maya, 3dMx and sandbox game engines”, you see these figures attempting to move with grace and dignity through public areas to receive unquestioned adulation, but something seems horribly wrong as we get Dorian-Gray-type images where the truth of each exalted and grandiose person suddenly winds up making it to the forefront. Yet, this image still seems invisible to the adoring masses due to the Scylla and Charybdis of a lack of real journalism and the existence of thorough-going public apathy. Solmi attacks fake narratives –  all leaders purport to be driven by integrity, concern and compassion, yet, in reality, each one is driven by an all-consuming desire for power, fame and money. Each of the members of the Brotherhood has mastered the art of demagoguery, rhetoric and public relations.

To me these images of murderous demagogues also work on a personal allegorical level. They are also, possibly, our inner dictators goading us to do the right thing for the wrong reason, to take short cuts in our own moral and humane development, to live in complicity instead of living in a state of moral autonomy. We should be continually challenged to discern these inner motives for what they are, instead of buying into them and justifying them.

Solmi is a past recipient of a Guggenheim Fellowship and has been exhibited throughout the world. The show runs until October 7, 2015 at Postmasters Gallery at 54 Franklin Street, New York City.
Posted by Daniel Gauss at 11:19 AM