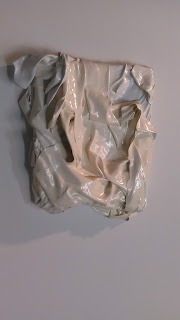 It’s too bad nothing was done by New York City government to try to preserve intact what was one of the greatest art gallery districts in the world.  Chelsea, as a hotbed of contemporary art, was never going to be the tourist attraction the adjacent Highline Park became, so it has been sacrificed to high rents and property taxes as the Highline transforms the neighborhood into the unthinkable. Thousands of oblivious tourists blithely walking over and past 200 free-admission art galleries has become a potent symbol of what it means for local government to pander to the out-of-towner for an extra buck instead of fortifying one’s own city’s cultural wealth and power for one’s own citizens and art lovers around the world.  I’m not sure what could have been done, but I’m guessing that when you have the richest guy in the city as mayor, whose agenda seemed to be pricing the poor out of the city, losing the country’s greatest, free visual arts resource would not seem to appear high on any official list of priorities: just another example of a lack of vision by leadership which, basically, bought its position in government courtesy of an easily manipulable, apathetic and self-absorbed electorate. 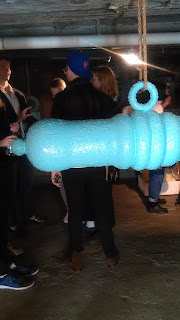 What’s a good way, then, to ensure that the orientation of your gallery retains a more genuine engagement between experimental artists and viewers, divorced from the financial pressures placed on you by the real-estate market in New York City to sell, sell and sell some more to pay your rent and keep your space? You might try what three new gallerists recently did and get space in a grimy little basement on the Lower East Side of Manhattan, fix it up a bit and then begin inviting artists who still retain high degrees of integrity and enthusiasm to show work. Indeed, Maximiliano Siñani, Kim Junsung and Selina Lin have created, through their own sense of integrity and passion for the visual arts, the perfect anti-Chelsea in ‘67’ the gallery located in the basement of a building at 67 Ludlow Street on the Lower East Side. 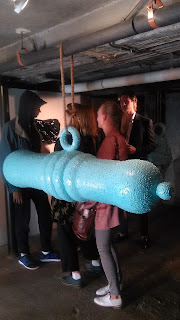 Apparently Douglas Rieger, one of the artists in the show and an MFA student at Yale, has been reading about Wilhelm Reich’s theories of self-development and especially the concept of character armor – actual physical responses within the body that occur to suppress feelings when individuals do not want to face challenges or address emotional states they don’t feel they can or should handle.  In fact the title of the show ‘Basement Youth’ seems to be a type of Reich-inspired psychological metaphor for processes involved in development, intimacy and sexual expression or repression. 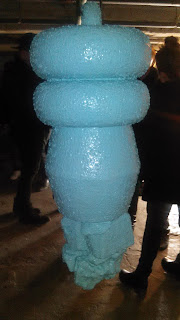 Rieger also seemed to discover that, coincidentally, “The Basement” is a hugely popular but controversial youth ministry program begun by a young man struggling with drug addiction, who began using the Gospel to reach other ‘troubled’ youth, first in his basement, then throughout larger and larger public meeting places. A basement becomes that extra ‘malleable’ space, as Rieger described it, in the home, sort of like Erving Goffman’s concept of ‘backstage’ – the non-public public space where issues are addressed and things worked out before an actual public performance begins. Psychologically, I am guessing, “Basement Youth” could mean the backstage portions of our lives where the malleable becomes, unfortunately, less and less malleable, often as a response to social pressures, judgments, expectations, limitations etc. 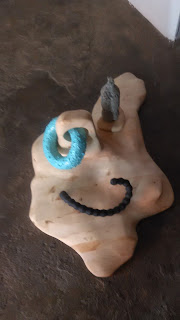 Rieger’s work seems to embody both mechanistic and biomorphic elements and he explained to me that his work is meant to depict objects reflecting desire – but desire inadvertently or maybe deliberately expressed through the process of mechanization and industrialism. He pointed out that in the early stages of industrialization aspects of machines often took on sexually suggestive or charged biomorphic forms. These days machines are streamlined and designed to appear as asexual as possible, perhaps reflecting the ultimate triumph of character armoring and the repression of the sexual and natural in our lives. 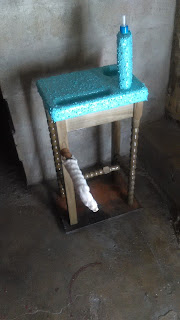 Maybe this parallels what happened in the transition from paganism to Christianity - in early Medieval church architecture craftsmen often secretly planted images of ‘green men’ or pagan nature deities into the church decorations to reflect that the old beliefs and practices still survived among the workers. Later, in church architecture, these green men and deities were omitted just as sexual biomorphism as a type of subconscious or biological protest to industrialization and globalized commercialism is disappearing. Rieger’s objects seem to reflect the tension between the biological and mechanical and the extent to which economic processes and functions may have led to greater ‘armoring’ demands for our bodies, just as Christianity once demanded a more severe divorce between our bodies and nature (leading to the false dualism of body and mind). What the Christian religion could not fully accomplish, the globalized capitalist is here to finish. 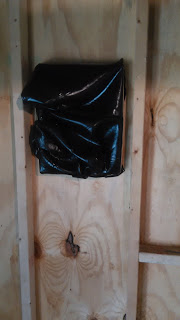 Dylan Languell contributes pieces to this show which seem to reflect the tension artists often feel between work and creation. To me he is asking to what extent art is separated from commercial concerns or can be separated from commercial concerns. The visual arts, if I may be completely candid, seem to be among the most corrupt of the art forms. As a guy writing reviews in New York City I’ve learned – and some gallery owners will tell you this – quid pro quo rules the day. You’ve got nepotism, favoritism, back-scratching, probably little envelopes being exchanged, ‘elite’ gallery owners and buyers colluding to promote nobodies creating meaningless crap to inflate prices of crap pieces to be resold to wealthy idiots etc. Art often seems like one big con game to me, and as a conscientious reviewer I’m always looking to find the ‘real’ art by ‘real’ artists out there, and I am always grateful and sometimes ecstatic to find it, because it can be so rare. I think Languell, the folks who created this new gallery, and I all believe that there is such a thing as ‘real’ art – the challenge is to find ways to get it out there. 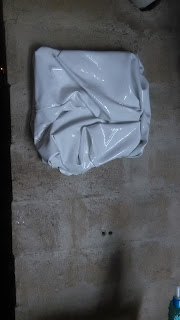 So Languell takes real paint…yes, the kind of paint your mom made you use to paint the living room. He then layers it and layers it and layers it to the nth degree. This repetitive action ultimately results in what might be called an emergent quality inherent in the paint itself.  The paint loses its initial function and develops its own potential for expression. So there’s a process art component of this as the artist has to painstakingly layer the commercial paint the way On Kawara painted individual dates each day or the way Peter Dreher wakes up every day and paints the same drinking glass. To me this type of dedication and perseverance is a beautiful analogue for faith. You are committed to a process, engage in this process daily and wait for some type of often unpredictable fruition. Languell gets an amazing fruition in his pieces – some look leather-like, some look as if they are taken from Baroque marble sculptures of the clothing of orgasmic saints. 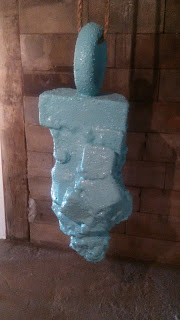 Interestingly, and maybe the curators of the show realized this, the layered paint pieces also seem to reflect a type of ‘armoring’, but it’s like the armoring depicted in Bernini’s orgasmic saint - St. Theresa. So it’s not an armoring to repress, but one which reflects inner florescence. Take a look at that sculpture again by Bernini – you don’t see that woman’s body. Bernini’s got her body completely covered in undulating cloth. It’s as if the folds in the cloth represent the psychological wave patterns in her spiritual orgasm. To me, Languell’s pieces represent these same types of wave patterns that often lie locked within the paint used to create, but can be unlocked through an arduous act of meaningful commitment by the artist. He takes a potentially corrupt art form, one that can be readily exploited by the money guys, and through a sense of integrity and commitment finds a way to engage others on a deep and transformative level. This gallery is at 67 Ludlow and is currently only open from Thursday through Saturday, 4 to 8pm.

If you wanna buy any of this cool stuff, make them an offer at: info@sixtyseven.us
Posted by Daniel Gauss at 4:54 PM