Some shots from the Banksy show at Taglialaterra Gallery 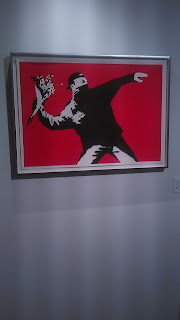 I didn't know this show was up, I ran across it accidentally, so I just took some quick shots with my smart phone. I'm assuming this gallery 'represents' Banksy - if it does, I think it impugns his credibility, big time, as a 'political' street artist. It could be that Taglialaterra bought and collected this show from others, but the pieces were all signed by Banksy, which makes me believe he is working through this gallery. 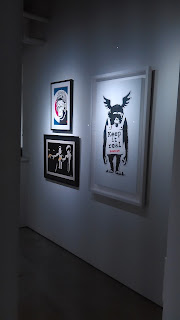 I like socially critical, leftist political art a lot, so I guess that's why I don't like Banksy. 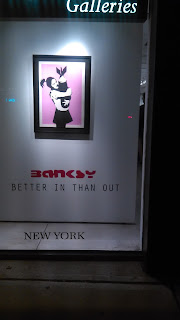 SMASH THE SYSTEM...after Banksy cashes in... 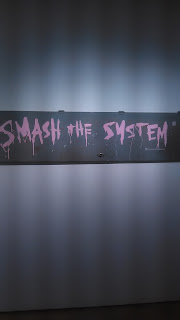 When he came to NY City last year, he thought it was funny that he offered many of his untitled and unsigned pieces for $60 a piece at a public stall near Central Park and that only two people bought pieces. Of course, each authentic piece by Banksy is 'worth' about $10,000, but nobody knew the pieces were by Banksy.

To me, this proved that if people look at a work of art by Banksy objectively, they, generally, will not find it meaningful or impressive, and the only reason anyone might buy his stuff is due to economic considerations. He's been a ruthless self-promoter, using social ills to fill his pockets. 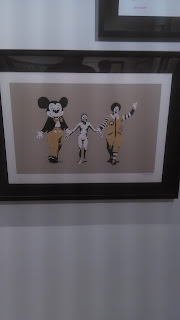 So how did he get so big? Guys with money decided he should be big. He played into their system, they realized they could make a buck from him, and now he and they are cashing in. Taglialaterra is not a struggling Lower East Side gallery - this is a gallery for artists who generate dough re mi. 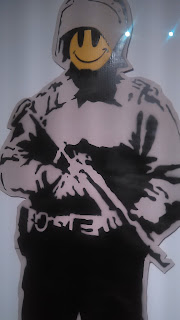 So Banksy might argue that he is using their system to get radical ideas out there. He might even be laughing at the wealthy guys who have elevated him to a popular status, because they are also elevating an 'anti-corporate' or 'anti-war' attitude. 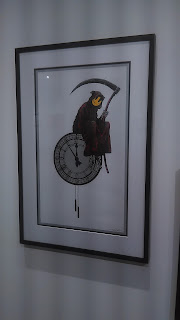 Yet, the image of the 'napalm girl' between Mickey and Ronald is not as powerful as the image of the 'napalm girl' herself - in his attempt at (a very weak and facile) satire, he's almost fostering an acceptance of corporate greed. You don't look at a Banksy painting and question the assumptions of your lifestyle, you say: "Yeah, that's true..." and go your merry way. Banksy participates in our desensitization toward corporate America. He makes too much of a caricature of it for his art to be effective. This is not art toward social transformation. 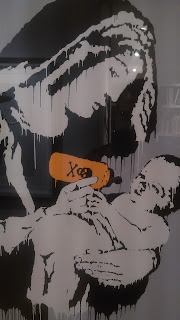 So congratulations on your success dude - you are one of them and probably always were. Just $15,000 for this lovely Madonna feeding her child toxic gunk...it will look lovely in your den and can be resold for 3 times its original value within 5 years. 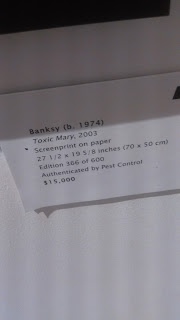 Basically Banksy is the art world's version of Paul Revere and the Raiders. In the 60s and 70s it became profitable for rock and pop bands to 'attack' the system. Did they change the system this way? No, they became a part of the system in the way Foucault pointed out that real social protest can be watered down, embraced and incorporated into the dominant system to help crush real forms of criticism and protest.

Ladies and germs...we bring you Paul Revere and the Raiders...their gut-wrenching lyrical saga of the Native American:

...as prophets of change:

Email ThisBlogThis!Share to TwitterShare to FacebookShare to Pinterest
Labels: banksy, banksy in new york, banksy is a capitalist, banksy is a hypocrite, Daniel Gauss