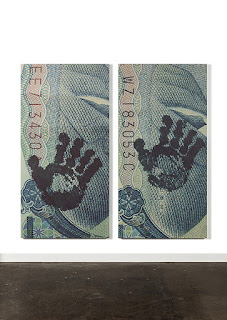 {{{work by Hugh Scott-Douglas at Chicago's Museum of Contemporary Art from: https://mcachicago.org/Stories/Blog/2015/8/Recently-Acquired-Inspiration-For-Out-Of-Office}}}

Katya Kazakina of Bloomberg News has exposed something that looks very corrupt about the art world - 'art flipping'.If I understand all of this correctly, it seems that some art gallery owners and buyers, along with critics and auction houses, were selecting unknown, young artists and deliberately inflating their reputations so that the value of the artists' work would continually increase every few years when the works of the artist were resold (flipped).

All the pieces being flipped were apparently works of abstraction (because it is easier to impute great significance to a piece most people would not easily understand or which has no meaning in the first place) and the artists were all very young (they did not have established reputations and so new and exalted reputations could be created for them - this scheme would not have worked with 40 or 50 year old artists).

Please read Katya's amazing detective work here: http://www.bloomberg.com/news/articles/2016-09-19/that-100-000-painting-bought-to-flip-yours-for-about-20-000
Now, the apparent scheme seems to be over and the bubble has burst; but, dear Chicagoans, which was one of the 'major' museums to possibly buy into this apparent scheme - or at least to display art which, drawing conclusions from the Bloomberg News article, seems to be among recently 'flipped' art?Chicago's Museum of Contemporary Art?

On a museum blog an image of a work by Hugh Scott-Douglas is shown with this caption: "Collection Museum of Contemporary Art Chicago, gift of Marshall Field’s by exchange, 2015.5"

Hugh Scott-Douglas is mentioned in Kasakina's article as being one of the artists whose work was being bought and sold for profit, so even if the museum did not pay for this work, should members of Chicago's Museum of Contemporary Art be concerned about the aesthetic value of a piece that was, apparently, possibly meant purely to be a financial commodity?

So I guess some big questions would be: Would this artist be so well-known without all the recent art-flipping? A recent work of his had been previously sold for $100,000 and it was resold at auction for a $70,000 loss at $30,000 (due to the bubble bursting on the art flipping process?).
Frankly, I believe Hugh Scott-Douglas is a legitimate artist, and I believe that his work, based on the Bloomberg article, was used.

But, would this artist's work even fetch $30,000 now had it not been for the fame he acquired by having his art "flipped" in the first place? Can anyone ever see this artist's work outside of the fact that he might have been a (unwilling) beneficiary of flipping?

Should the folks who buy memberships be asking why Chicago's Museum of Contemporary Art would be showing what might be called art of questionable merit, that seemed to have its price artificially inflated by apparent corrupters of the art market?

Should members of this museum be asking the extent to which Chicago's Museum of Contemporary Art might be complicit in what truly does look like a very shady scheme which has suddenly gone south?

Personally, I think these are quite legitimate questions.

Maybe Chicago's Museum of Contemporary Art can help us poor, unenlightened proletarian viewers by establishing a section dedicated to 'flipped art' as opposed to 'unflipped art' so we can see whether there is any difference.
Posted by Daniel Gauss at 2:31 AM