Gauguin at the Art Institute of Chicago (2017) 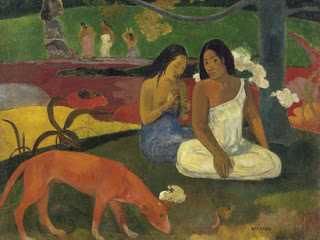 When Gauguin reached Tahiti, to become the ‘savage’ he always felt he was destined to become (he boasted of having Peruvian blood as proof of his innate primitivism), he found that it had already been transformed into a French colonial outpost. The native inhabitants worshiped in Christian churches, they picked fruit for French companies and they even wore clothing that had been imported from France. Yes, they wore clothing: nary a naked woman to be found basking among the lush surroundings. He had been too poor to obtain transport to any place French shipping did not go to and was now stuck in a French backwater. 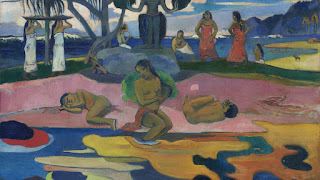 No matter – he wrote back home to declare he was now living the life of a native and created paintings falsely reflecting what life on the island was like. He went out seeking ‘savage’ subject matter and that is exactly what he was going to produce. As Wagner wished to remove his art from a tradition of Christian allegories and morality and reposition it in Nordic mythology and traditions, Gauguin wanted to part ways with a Christianity that had lost so much of its pith that stale secular consumerism had been allowed to proliferate in Europe. 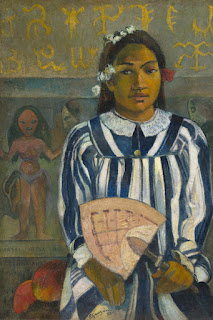 Gauguin’s exported conceptions of Tahiti were no different or original from those he had read about in travel books (which had lied about what was over there). In the meantime, he possibly spread syphilis around his island, regularly paying for sex with teenage girls, oblivious to the harm he was causing to this putatively pristine community of the uncorrupted. Free, pre-Christian, sexual love did not exist on Tahiti, if it had ever existed anywhere, but that did not seem to matter either. Gauguin became, basically, the worst type of European imperialist pollutant, not a valued member of the Tahitian community. He stayed there regardless, to create his ‘myth’. When he died in the Marquesas (he had to leave Tahiti because folks got fed up with him and he with them), he called the place where he lived the House of Pleasure. If you are looking for an artistic version of Joseph Conrad’s Kurz in Heart of Darkness, it is, perhaps, Gauguin. 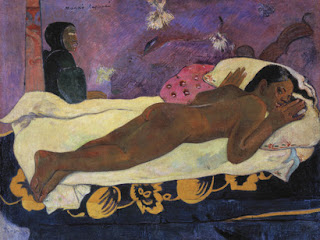 One could argue, however, that you cannot fault Gauguin; he was ready to take the plunge into savagery but just did not have the money to do it. What else could he do but create it himself? He knew religion had lost its power and much of its meaning in his home country and he intuited that at one point the religious experience must have been stronger and more tied to the natural environment and one’s community. Sometimes intentions and gestures are better than nothing and this seems to be what has redeemed Gauguin through the ages in the art world. It is not so much what Gauguin did, but what he wanted to do, or purported to do, in the face of the nothingness colonialism had brought to once vital and dynamic parts of the world. 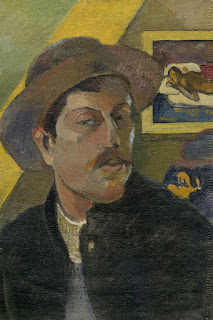 The French capitalists and priests had crushed indigenous culture everywhere they had gone and all Gauguin could do was guess (to his credit he also did extensive research and reading into what life and religion had once been like in Tahiti). Gauguin was very Faust-like in his desire to abandon and transcend and a Faust is never satisfied with what Mephistopheles gives him, as Mephistopheles is often unable to deliver what a Faust truly desires. 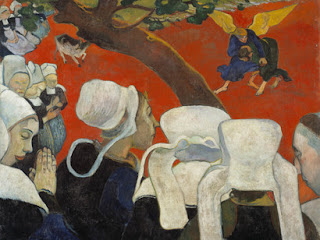 The genesis of Gauguin’s ultimate Tahitian conceptual art project occurred in Brittany. Here he discovered a type of Christianity that still harbored elements of the old countryside paganism. Elements of magic and superstition along with this region’s ancient rituals and a deep belief system, sincerely shared by everyone, made life more interesting and compelling. If nothing else it was different and surprising to Gauguin - the way you might feel the first time you read Frazer’s Golden Bough. It helped maintain a stronger community. There was a creativity, compassion and warmth in this religion that was lost in an industrialized France and it was not reflected in the galleries or museums of Paris. Gauguin sought a lifestyle that engendered myth-making and extreme, extraordinary aspirations and longings. 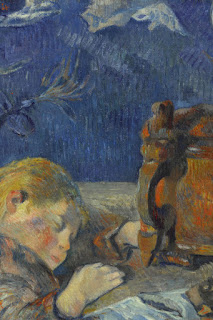 From Brittany, Gauguin soon sailed to Martinique where the vibrancy of the indigenous population smacked him in the face and his desire to chuck Europe for good and find a place of pristine, non-Christian, non-industrial liberation was firmly planted. Poor Gauguin, however, lived in a paradoxical world where you had to have lots of money to potentially find real savagery. In lieu of buying himself a ticket beyond the reaches of French colonialism (where he would probably have been shunned by real natives and died of insect borne disease or a snake bite), he could only speculate and share.
The Art Institute surveys Gauguin’s artistic work from its beginnings to its final touches in Martinique. The Art Institute of Chicago is one of America’s great museums – indeed, given the fact that Chicago is such a new city, it is amazing what a thorough and engaging collection this institution has put together. The show runs until September 10, 2017.
Posted by Daniel Gauss at 3:12 PM