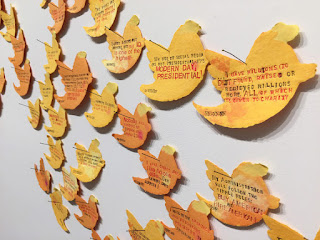 When foreign folks in New York City ask me what the basic difference is between the Republican Party and the Democratic Party in the USA, I jokingly tell them that Republicans are evil while Democrats are corrupt. Why are Republicans evil? Well, their core principle is ‘survival of the fittest’ – which means those who inherit a lot of money survive and prosper while everyone else suffers and dies before their time. Everyone should take care of him/herself and whatever is good for business is good for America. 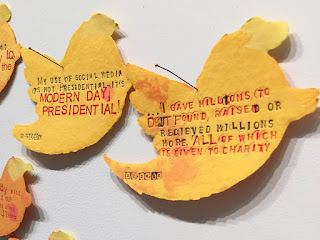 During the Great Depression a Republican president (Herbert Hoover) said that he was not going to help Americans who were hungry or out of work because government assistance makes 'the people' weak. Yes, there is nothing stronger than a guy who inherits millions of dollars, is profligately irresponsible, has no self-restraint, chickens out of military service while the less privileged go, employs a vocabulary that would embarrass a 4th grader, and manifests an overweening sense of malice toward anyone who does not look as if he belongs at an exclusive white country club. Which brings us to the current president of the United States: Donald J. Trump. 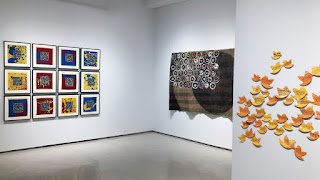 Deborah G. Nehmad has a show currently at Kim Foster Gallery in which she has collected and graphically represents numerous tweets from President Trump. Each tweet reflects what most of us who love art have aspired to overcome – human life at its most base, arbitrary and unexamined. 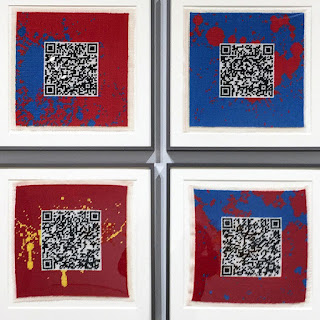 The tweets reveal Trump as someone with no capacity or desire for self-examination or self-control. This is a life without art and without the underlying impetus that drives many of us to art – to better understand ourselves and our world to ensure that we can rise above the random and arbitrary; to develop meaning and work toward humane change in ourselves, others and the world. The tweets show that the ideal of not returning evil for evil was abandoned by Trump long ago, as he was apparently taught as a child that there are only two types of people in this world: killers and losers (Norman Vincent Peale be damned). His tweets displayed by Nehmad are works of art about a life devoid of art and what one is left with in its absence. It is an installation about a “loser” who will not even try to observe, judge or change the worst in himself. 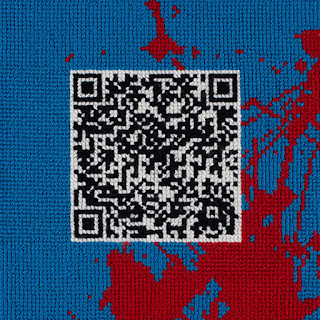 Trump simply cannot say 'no' to any urge or desire he feels, perhaps because Trump was a child of the Eisenhower Era, which was an era when consumerism and debt first began fully dominating the daily life of average Americans. This was a period of time when self-restraint and self-reflection were recognized as not being good for the economy and many Americans began abandoning the long-cherished values of thrift and moderation. You were not supposed to examine your emotions, motives, desires or thought processes, you were supposed to consume, live comfortably, get a gray flannel suit, buy a house, mow your lawn, get a lucrative job that conferred respect upon yourself (whether you actually did anything meaningful for others or not), pay your taxes, support your corporation. 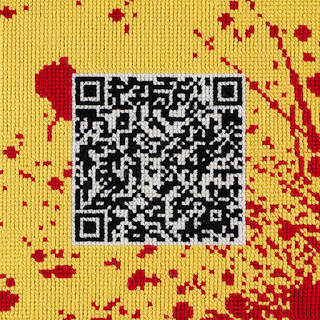 It was this overall attitude that the beatniks, the hippies and the 60s youth movement rebelled against – yes, the 1960s, when Trump deftly avoided such political and personal awareness but tragically suffered from those bone spurs which prevented him from manifesting any macho heroics in the rice paddies of South East Asia. Unlike his more enlightened peers, Trump seems to have embraced the worst of the Eisenhower Era, forgetting, perhaps, that the Civil Rights Movement also took off during this time. 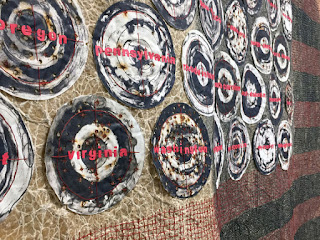 Sometimes his emotions lead him in one direction: “FoxNews totally biased and disgusting reporting!” and then the other: “FoxNews – totally gets it!” In these cases Nehmad has the contradictory Twitter birds attacking each other. The president of the USA is clearly not a person in control of his own life, but someone who drifts from one provocation to another. “Why isn’t the Senate Intel Committee looking into the fake news networks in OUR country to see why so much of our news is just made up – FAKE.” “The travel ban should be far larger, tougher and more specific, but that would not be politically correct!” “Bad people are very happy!” “When someone challenges you unfairly, fight back - be brutal, be tough – don’t take it. It is always important to win.”

He is incapable of understanding his own wrongs but seems capable of attacking and judging others for their faults and errors, not being able to wrap his brain around the concept of self-assessment, but still able to pontificate and give advice, often not realizing the irony involved. “I hate bullies!” “Perhaps Obama’s biggest shortcoming as president is his failure to unite the country.” “Be tough, be smart, be personable but don’t take things personally. That’s good business.” “Don’t give in to anger. It destroys your focus on goals and ruins your concentration.”

In the other part of the show Nehmad continues her focus on the effects of gun violence in the USA. As in previous work, Nehmad looks for ways to involve the viewer on a deeper level than one might be involved or affected by news reports or statistics. Therefore, she redesigns the American flag around the theme of gun violence. 50 circular targets represent each state and each target is punctured or stressed depending on the number of mass shootings in that state. The stripes of the flag either represent the prevalence of murder through firearms or, on alternating stripes, suicide by firearms. One can clearly see that the number of handgun-assisted suicides is quite large and a neglected aspect of the Second Amendment debate. To use the American flag in this manner is also to imply, perhaps, that the current flag does not adequately represent the over-riding values of the country that elected Donald Trump as president. We do not seem to value the concept of being able to handle our rage. The election of Trump and gun violence almost seem to go hand in hand. Trump is a popular culture celebrity and our popular culture revolves around the objectification of others and the resolution of problems through force. Guns exist to help facilitate or give license to our rage – against others and ourselves. An amendment allowing the purchasing of guns in a country’s Constitution is almost an admission that this is not a society built around humane personal development that can resolve conflict.

Nehmad has also done some needlepoint pieces of QR codes. If you download an app to read the codes through your smartphone, statistics reflecting gun violence against children for the 12 months following the Sandy Hook massacre pop up. Nehmad explained to me that she wanted this to be a type of mother’s approach and protest toward the fact that after the shooting massacre of over 20 kindergarten students by a mentally disturbed young man, basically no meaningful response was taken in the USA. BY using the QR codes, she seems to mock the consumerist nature of a culture that allows us to readily buy weapons to kill children and implies that it is more profitable when folks attack each other than when they try to understand and live peacefully with each other. The industry of the gun manufacturer is more important in the USA than the safety of developing children.