Does this mural in Chelsea reflect a sexual assault? 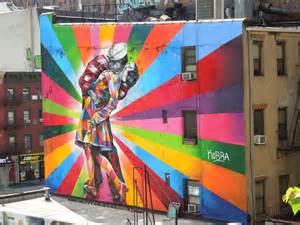 Actually, it's kind of hard to see from this distance but this is a version of the iconic photo from the end of WWII - taken in Times Square.

Thousands of tourists who walk along the Highline Park in Manhattan's Chelsea neighborhood see this mural every day.

Does anyone else think this image is problematic?  I'm not sure this is an appropriate image to be emblazoned on a giant wall in Chelsea.

Indeed, last year a few people began publicly criticizing the iconic photo on which this mural is based:

I tend to agree.  Basically this sailor just grabbed a woman and kissed her.  If you look at his body and her body, this looks like a very forceful event in which she simply did not have any choice.  He's basically taking her against her will and forcing himself on her. Looking at it last night, it didn't seem to be the cheerful 'war is over' image I had remembered it to be.  I think this was a bad choice of images by the artist Kobra. 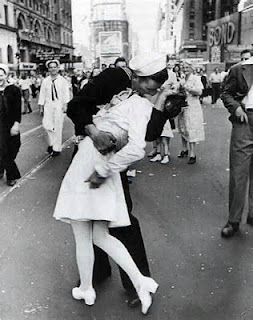 Furthermore, I would argue they are celebrating the end of the war as if an athletic team just won a championship.  Lots of people died, atomic bombs were dropped and this type of celebration just seems inappropriate to me.  Maybe I'm a prude but a World War II 'celebration' might have been "more honored in the breach" (to quote from Hamlet).  Maybe a prayer service and not a sexual assault in Times Square would have been a better 'celebration.'
When I looked at the mural last night it really bothered me and I was happy to see that others have had the same response in the past (although not many).  I just think it's a problematic image on a bunch of different levels.
Artists are no longer socially progressive? They don't analyze images? They don't question what they see?
The woman in the photo later said this for a book about the kiss:
"It wasn't my choice to be kissed...The guy just came over and grabbed me!"

"I felt that he was very strong. He was just holding me tight. It wasn't a romantic event."
Posted by Daniel Gauss at 10:09 AM