Very clearly and precisely painted on the left side of the small canvas you'll see the skull of a dead animal (maybe a squirrel or rat).  On the other side you'll see some type of plastic container. 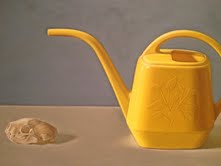 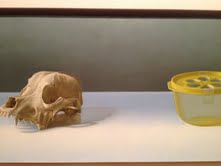 So my interpretation was that the left side of the canvas represents a "dying" of something, which leaves permanent evidence of that life, while the right side represents a permanent "capacity" - the possibility for the preservation of some type of nutrient to sustain life. 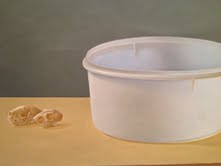 So if we want to think allegorically here, we could say the painting represents a death to an animal nature revealing the possibility for a capacity to sustain a new type, or higher type of life.  This would be a clear interpretation of the skull next to a water container - the container being an obvious reference to providing a basis for the growth of new life. 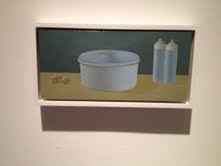 However, the artist was there and my friend Jackie Zhu (who was kind enough to take these photos) and I chatted with him.  He didn't want to give us his interpretation of the paintings, but he said he thought our interpretation was interesting.

He also told us that he created this type of painting, or the concept crystalized, after the death of his dog.  This was meaningful to me - as a guy who, as a kid, at one time had 5 dogs in my parents' house (I used to try to save strays in my neighborhood and we had a large backyard).

Also, talking to someone else at the gallery, we learned that the plastic containers might have belonged to the artist's grandmother.

So this personal information about the artist could change the interpretation significantly.  Perhaps the piece is about absence, loss and grief.  The piece could be about the quiet, lingering, sometimes gnawing grief many of us carry with us after experiencing the deaths of those we loved.  So the objects might not signify a 'presence' but an 'absence' and the emotional pain that comes with it. Many years after my own father's death, I see things that remind me of him, and the first emotion I feel comes from my sense of loss.

The artist could also, conceivably, be comparing the sense of loss he feels for a deceased animal and the sense of loss for a family member.  I think many of us know how painful and unforgettable the death of a pet animal can be.  The artist may be examining this phenomenon as well.

Jackie had something interesting to say about this in email she sent to me:

"Now I’m looking at the guy’s plastic container paintings. His delicate technique reminds me of the Renaissance masters. Together with the dog story, it provides the story of the artist himself. His art pieces and his story make the artist a human being for me instead of a creator of art. I feel that this humanity attracts me more than the images."

Gombrich once said, "There is no such thing as art - there are only artists."  Jackie's statement reminded me of this quote. 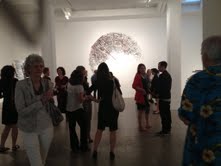 A brief shot of the Miller Gallery yesterday.

Now I have a bone to pick with the Robert Miller Gallery!

Thankfully I brought along a couple cans of beer in my laptop case - just in case there was no alcohol at the opening.  No alcohol at an opening!  How uncouth!

Actually, there was alcohol (red wine) in nice wine glasses, but only a few people were hand served by the staff.  Folks sitting behind a counter literally walked out and gave some people nice glasses of red wine.

So there was an apparent hierarchy at the gallery - on top: those with fancy wine, in the middle: those with no wine, on the bottom: me with my own beer.  That's not right.  We had a 'have' and 'have not' situation yesterday.  I mean, make your openings private if you don't want to give the general public free wine.  The opening was on a Wednesday night anyway, so it's not like the throng of 'Thursday-nighters' was there just to get booze.  You had ART LOVERS there. This was the only opening in Chelsea last night.

One of the things that really makes the art galleries here amazing is that, generally, the gallery owners have always seemed to embrace a dual mission. Of course, they want to sell art but, importantly, most Chelsea gallery owners want to share art.  How many times have I wandered (poor as I am) into a Chelsea gallery on a Saturday afternoon only to have an owner chat with me about the artist's work (knowing damn well I wasn't going to buy anything)?  These are really fine people.  I have to call a spade a spade and say I didn't get that ambiance last night.  I got a "we like some people and will give them wine and we have to tolerate other people" attitude.  Folks at Miller ---> that sucks. That's nasty.  There was a nasty attitude at your gallery last night - period.

To me, free wine is a part of the gallery experience.  It is part of the celebration of the artist's achievement.  I thought it was quite unfair that only a few people were served.  Indeed, there wasn't a huge throng of people - and the wine doesn't have to be great wine.  Buy a jug.  Buy three or four of those giant bottles of wine at a local liquor store and offer plastic cups.  It's just an integral part of the experience.

By the way, don't confuse the Robert Miller Gallery with Roger Miller - a very funny singer from the 50s and 60s: