Take a look at this group of people, and think about who they might be, and from what period of time they might be from: 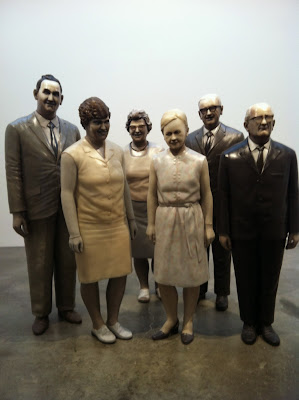 What's your general impression of these folks?

My friend Giulia and I pondered this group for awhile and thought it was a family (from the 1960s) at some type of family function - like a wedding or anniversary party.  We identified the eccentric, somewhat wealthy uncle (who looks a bit like Nelson Rockefeller), the uptight, frigid but attractive aunt who might have married beneath herself,  the suburban salesman and his housewife etc.

When we learned these were teachers, the pieces of the puzzle came together for us.  Of course this is a group of teachers!  And if you took a group of teachers now, photographed them, and showed someone the photo 40 years from now, you'd probably get the same response.

So I love this sculpture as an example of the professional deformation of a teacher.  When I taught, for a short time, I noticed this deformation as well.  This is because a teacher is not just a dissembler of information.  A teacher is a civil servant of sorts who is expected to get various administrative jobs done and to accomplish goals.  The teacher is a classroom manager first and foremost, and an educator afterwards.

Indeed, the teacher is the prime promoter of the 'hidden curriculum.'  This was a concept created in the 1960s (like most good concepts).  Basically it means that while the teacher seems to be teaching math or science or literature, he/she is really teaching discipline, order, obedience to authority, a blue-collar work-ethic etc.  Benson R. Snyder of MIT apparently created this term.

So in this amazingly funny work by Honert, we clearly see a corps of hidden curriculum engineers in their traditional garb, which changes periodically.

Please go to Marks and see this in person (as well as the other amazing galleries in that neighborhood).

I am Daniel Gauss, The Proletarian Art Snob.

Actually, it turns out these teachers were from Honert's own boarding school in Germany when he was a child.  You can read more at Marks' web site:  http://www.matthewmarks.com/new-york/exhibitions/2013-09-13_martin-honert/
Posted by Daniel Gauss at 1:20 PM