This gallery has really distinguished itself as a gallery that brings some of the more meaningful and incisive art work from South America to New York City.

In the current show by Miler Lagos, we see work by a contemporary Colombian artist who incorporates religious and mythological themes from an indigenous culture.

In many ancient cultures the tree was considered to be a type of bridge between the earth and the sky (or between people and God or our animal natures and our spiritual natures).  The roots stretched deep into the soil and the branches extended outward and upward into the air.

For the Tikuna people, however, who reside in an area between Peru and Colombia, there was one great tree which was quite sinister.  It was so immense that it blocked out the sun and extinguished life.

Twin brothers thus went on a hero quest with the animals of the forest and, by felling the tree, inadvertently created the many branches and tributaries of the Amazon River. Lagos uses paper reliefs and graphite images to depict this 'great tree of water' in what might be called convex and concave manners throughout the gallery.  This approach highlights the positive, creative force of the tree and the imprint in the earth caused by the force.

In particular, however, he has created some amazing tree trunks (made of thousands of sheets of paper, stacked and glued one on top of the other)  which bear beautifully painted scenes from Asian art on the top surface of each trunk.  (Thank you Giulia A. for snapping these photos for me...I miss you - come back soon!) 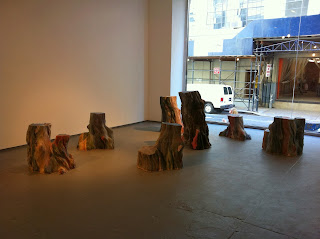 The images are often of trees or traditionally clad Asian women or just scenes of everyday equanimity. 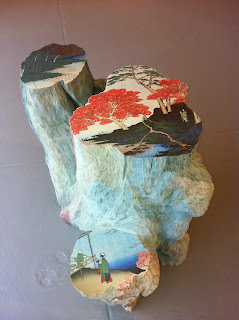 This set seems to connect more with the 'tree as bridge' concept than the 'great tree of water' concept.  These natural connection points between the earth and the sky have been destroyed, yet the plane caused by the severing of this connection now serves as a type of canvas.  The images of trees, fishermen, the sea and women represent an idealized traditional world of tranquility that has also been lost (if it ever existed), but which provides beauty and solace. 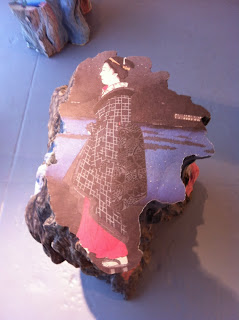