What is a Kuksi churchtank? The caterpillar tracks and the hull are two basic components of a military tank, and they are present, but, in place of a full turret (which is normally transported by the hull) Kuksi has placed a church edifice.  Indeed, the edifice of the church sports the main gun of the tank, which seems to emanate from a central narthex door of the church. 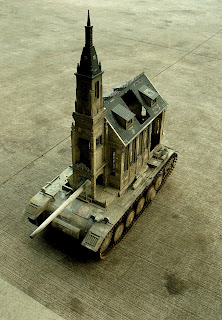 {{{click on images to enlarge}}}
What does a Kuksi churchtank mean?

One interpretation could be that the hull and gun represent our aggressive, animal nature: what Schopenhauer called our Wille zum Leben (a will to live and compete).  The church edifice might then represent our higher nature, a “spiritual” nature, which can either temper or release the aggression beneath it.  The main gun or cannon seems to be at the crux of this vehicle – the one element shared by the hull and church-turret.  One could say we are all little church tanks treading our way through the world each day.

However, thinking more geopolitically, a big implication of the church tank is that, in the real world, the forces of spirituality rarely temper the more aggressive churchtank features.  Kuksi, himself, explains that he created the churchtank series because he felt that the church seemed more interested in stifling other beliefs, religions and cultures than in promoting the core values of the Christian religion as preached by their putative founder.

The USA is, furthermore, 80% Christian.  We have recently engaged in two wars against Muslim countries.  George Bush called himself a Methodist and a born-again Christian whose alcoholism could only be tempered by the miraculous love of Jesus.  He also liked using the word “crusade.” Kuksi seems to ask to what extent the Christian religion guides our foreign policy on a conscious or unconscious level.  As David Halberstam pointed out, the guys who started and messed up the Vietnam War were all dyed-in-the-wool White Anglo Saxon Protestants who knew nothing about, nor cared to know nothing about, Asian culture.

Kuksi asks: to what extent does the church become a validation for the military and to what extent does the military prop up and support the church.  For instance, I would be remiss not to point out that the current Pope had a position of some responsibility during Argentina’s “Dirty War” and not only did not speak out against the murder of students and dissidents, but befriended folks from the murderous junta. 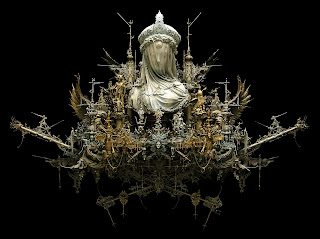 In Kris Kuksi’s work at Joshua Liner we also see what would seem to be idealized godlike images contrasted, yet connected to, in some manner, surrounding images of military preparedness or outright battle. 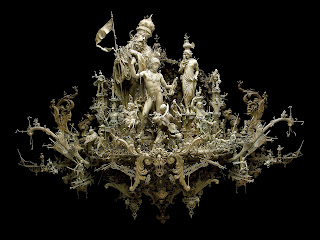 My first take on this was that the artist might be interested in the paradox of the extent to which only terrifying weapons and various types of military deterrence can create possibilities for peaceful spiritual pursuit.  After all, Chairman Mao showed the people of Tibet that you cannot pursue your religious goals unless you have an army to protect those goals. 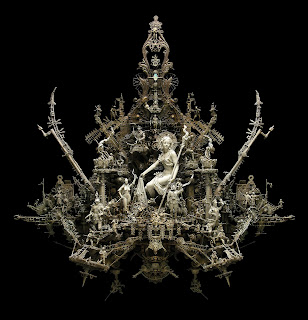 Is Kuksi saying there can be no pacifistic spiritual quest outside of a society that does not protect your quest with a zillion dollar weapons industry and military complex?  According to this interpretation, the god-like beings in Kuksi’s work are ideals of spiritual perfection and the surrounding soldiers make that perfection possible.  Yet, it could also be that the ideals and godlike idols are the ones generating the warfare.  One of Kuksi’s pieces is, after all, called Neo-Hellenism, and possesses a central Helen-like figure around which military conflict conflagrates. 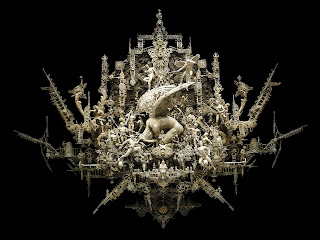