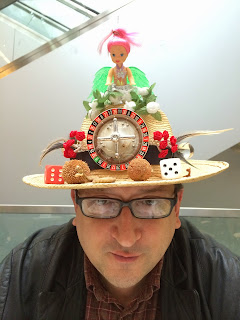 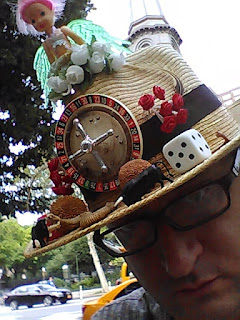 Two years ago, for the first big opening night of the Chelsea gallery season, I decided to make a goofy art hat just to get into the spirit of an opening night.  Now I tend to wear this hat whenever I go to the galleries and people invariably ask me what it means. Believe it or not, it has a meaning. :P 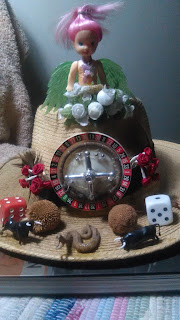 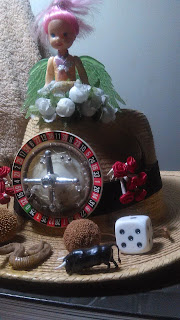 So basically everything under the silver horizontal line on my hat can represent our 'animal' or 'earthly' nature.  I also joke with people and say everything above the line represents our spiritual nature.  Above the horizontal line I have a little doll with wings that I bought from a dollar store in Woodside Queens. Under the silver line I have a plastic snake, a couple large round 'seeds' I found on the ground in Queens and some dice.  People say, "Dice? Why dice?" and I say, "Because the operations of nature are so random."

I also have another interpretation.  Looking at the snake, the dry seeds, the dice, the roulette wheel, people often guess the hat represents a type of Las Vegas theme.  So I say that another interpretation is that the bottom part of the hat represents a 'spiritual desert.'  I then say, "The hat means that if you are ever lost in a spiritual desert, the only way to escape is to.......gamble!  You have to take risks that you never thought you'd be able to take!"  People seem to like this interpretation more.

In fact, I like the interpretation more, too.  With this interpretation my hat is continually imploring people to take risks and to escape from spiritual deserts.  How laudable of me! :P :P :P  Maybe I should try to take my own advice one day. :P 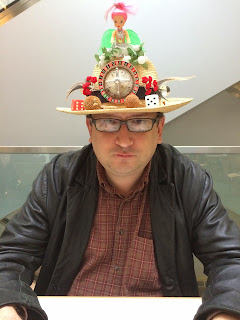