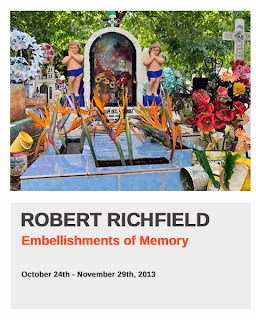 Recently there was a controversy at a Cincinnati cemetery where a 7-foot-tall Sponge Bob Square Pants statue had been placed as a grave marker.  Although the management of the cemetery initially approved the statue, they later removed it, seemingly believing that it was not dignified enough for the surroundings and that it could be a potential affront to others who wished to pay their respects to their dearly departed.  After all, the tradition in American cemeteries seems to be gravity and modesty.  Your marker is to be lost among the other non-descript markers of various sizes.  Your grave marker is the gray flannel suit for your mortal coil. You are expected to blend in, not outshine.  After all, you are dead: how flamboyant is that? You will be given a stone on which people can tell your religion, name, birth and death dates and, maybe if you are lucky, a mawkishly trite little epigram.  This is what the living owe you in America: no more and no less.  Don’t complain. Nobody ever does. 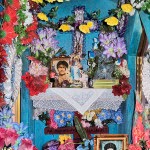 Not so in other parts of the world! Robert Richfield, in fact, travels the world and photographs lavish mementi mori.  In many of his photos (current and past) we see that graves in parts of Europe and Latin America are often elaborately decorated and intricately personalized.  As you can see from the photo in this review, every effort is made to distinguish this grave from others.  Ornate displays of flowers abound alongside religious trinkets, photos of the deceased, various doodads from the deceased’s private life and even images of the cartoon characters and pop culture icons which entertained and delighted the person. In this current show by Richfield at the Klotz Gallery, we see images of such graves from three locations: Mexico, Nicaragua and Sardinia. 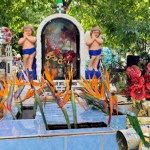 Why is there such a difference between cultures in regard to the burial and remembrance of the dead?  Klotz makes some interesting points in his press release for the show.  In Mexico, for instance, there seems to be a greater sense of permeability between the worlds of the living and the dead.  In the US we sequester the dead under 6 feet of dirt and consign them to oblivion through a perfunctory ceremony and a bland, cold resting place.  They are there – they are gone – we have to ‘move on.’ In Mexico the dead often remain present in the lives of the living and, on the Day of the Dead, Klotz points out that they are literally ‘lured’ back to the dinner table through the use of the food they loved and the trinkets and photos that will help them remember their previous lives.  In the US we show gratitude and then are expected to, basically, forget.  In Mexico a connection remains and is celebrated and annually reinforced. 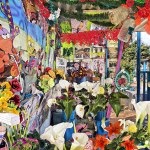 I first saw Richfield’s work at Klotz a couple years ago when he presented his “Still Life” show.  At this time Richfield was photographing mementi mori in Portugal.  There are funerary structures in Portugal which contain several coffins apiece.  Each coffin goes into a little rectangular concrete cubicle, which is sealed once the coffin is pushed inside.  Looking at the structure you see a small building divided by up and down rows of these small chambers.  But outside the sealed entrance of each cubicle is also a little display case provided for the family and friends to leave memento mori.  A glass window is then shut so that when looking at the structure you see these displays of affection in the various square windows that make up the front of the building.  Richfield relished photographing these floral, religious and personal displays through the sealed glass, since the image often allowed a view into the display case as well as a reflection of the outer-world facing the case. 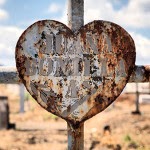 Since the current photos are of graves that are outside, these photos are much more direct.  The colors are brighter, frames are filled with sunlight and much more detail is apparent.  The only real photographic ‘tricks’ employed would seem to involve altering the distances between ‘subject-to-camera’ in order to bring greater or lesser focus to various details.  He wisely allows the images to speak for themselves.

In Cincinnati a family wanted to call attention to the uniqueness of their departed relative and they were quashed.  They chose a cartoon character as a monument because they knew that a funeral and burial should not just be gravity and modesty.  These photos by Richfield validate this attitude. They show that in many parts of the world a deep sense of loss is mingled with a sense of whimsy, pride, gratefulness and a sense that the real presence of the person who lived is still with us and still to be treasured. These photos allow a remarkable reflection on the process of grief and mourning in societies that have not succumbed to the bland secularization of death we find in the US.
Posted by Daniel Gauss at 3:40 AM