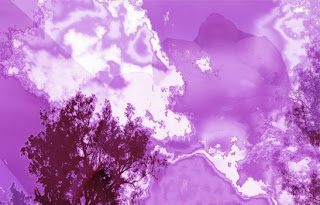 The Tyler Rollins Gallery, in Chelsea, focuses primarily on emerging and established artists from Southeast Asia. Since the mid-2000s they have done a yeoman’s job of presenting amazing art work which otherwise might have been overlooked in America. Tyler Rollins Fine Art’s latest show extends a bit beyond its usual geographical parameters to feature the work of a world-renowned Australian artist (of Aborigine descent) who deals with issues surrounding the troubled legacy of Australian/Aborigine relations and how she and others have been impacted by and have even overcome this legacy. 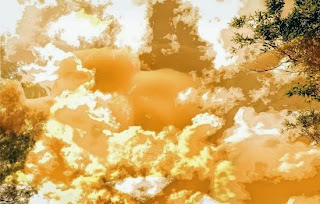 Some historical background can help the viewer better appreciate the work by Tracey Moffatt in her “Spirit Landscapes” show.

After the English arrival in New South Wales (Australia), the English Governor issued an 1835 proclamation that, before the arrival of the English, the land of New South Wales had belonged to ‘no-one’. This was followed by a softer proclamation declaring that Australian land could not belong to anyone without the consent of the colonial government. A legal declaration that the land on which Aborigines had lived for tens of thousands of years truly belonged to them was not issued until the Mabo Case of 1992.

Like Native American ‘Indians’ Aborigines died in huge numbers from European-borne diseases and their hunter-gathering clans were forced off of land that they needed for their survival. Aborigines who tried to resist were slaughtered (aborigines who didn’t resist were slaughtered as well) and many were forced into slavery and prostitution. Ultimately, the Australian government decided on an ‘integrationist’ approach. This, unfortunately, led to the ‘stolen generation’ (from 1910 – 1970) - the fact that 100,000 aboriginal babies were literally taken from their mothers and placed in white families. 1% of the Australian population is currently Aborigine and about half live in towns (usually in ‘slum’ areas) while others have tried to return to their original lifestyle. To this day Aborigines are routinely subjected to racism, discrimination and violence. The Aborigine population suffers from high rates of alcoholism and the Australian prison population has a disproportionate representation of Aborigine men. 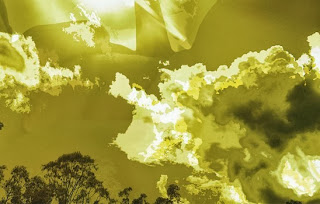 The show “Spirit Landscapes” constitutes one of the first major shows by Moffatt after she returned to Australia after twelve years in New York. This theme of returning home is best embodied in Moffatt’s “As I Lay Back On My Ancestral Land” series. In these photos we see that Moffatt lies supine on the ground that allegedly had belonged to ‘no-one’ until the English found it. In the process of resting again on this land, her body seems to engage in a type of levitation in which it and the sky visually merge. These are visually arresting and beautiful images. In allegorical literature and art, spiritual fulfillment is often expressed through some type of union – the masculine and feminine, the active and passive etc. What’s unique here is that the union that denotes a type of spiritual fulfillment is between the human body and the sky. As I Lay Back On My Ancestral Land #2 seems to show this most clearly.  Moffatt seems to abandon the traditional Western concept of spiritual union for a more elemental concept in greater harmony with her people’s legacy and traditions. 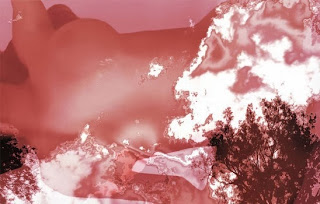 In the stories of the “Dreamtime,” when the original inhabitants of Australia were created and placed on their land, the dreaming creators literally sometimes changed themselves into the places people inhabited. People who belong to an area are also literally part of the area as well. The effect of merging the body and clouds within a monotone hue, so that the curves of both the body and the clouds are sometimes hard to distinguish from each other, gives a sense of deep fulfillment. Perhaps it is the serenity of the traveler who has come full circle and has embraced the meaning that the colonizers of her land were never able to fully extinguish. 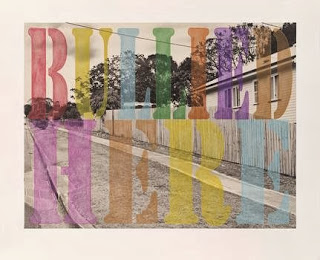 In ‘Suburban Landscape’ an apparently innocuous image of suburbia takes on a more ominous interpretation through the crayon stenciled description Moffatt places over the photo. “BULLIED HERE” represents a deeply embedded association between this spot – a sidewalk leading past a house - and an act of cruelty which happened to the artist. There are, however, more cheerful photo descriptions showing that along with the challenges of an aboriginal childhood among the dominant culture of Australia there are moments of innocence and joy. 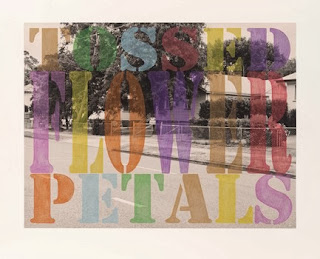 We see: CROSSED THE CREEK and TOSSED FLOWER PETALS, for instance. 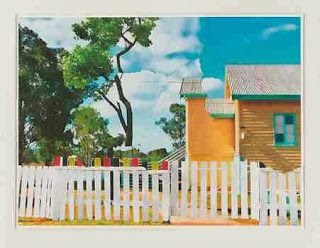 "In and Out’ shows stills of figures at the entrance of a mining town brothel, where, presumably, aboriginal women are forced to provide pleasure for the miners. In “Picturesque Cherbourg” we see the settlement where Moffat’s own family was forced to relocate from their ancestral lands. The images are of beautiful middle class surroundings including neatly maintained houses and lavish gardens. Yet, on closer inspection, we see many of these images have been torn and placed back together.  Perhaps the rage toward these images comes from the fact that so many people succumbed to the life offered to them by the Australian government, or that they had no choice but to try to integrate. The torn images could also represent anger generated by the simple fact that the Aborigine population was forced to try to integrate but never, in fact, allowed to fully integrate.

“Pioneer Dreaming” presents images of famous Hollywood actresses in various Western movies which glorified the pioneer spirit and demonized the American Indians. The women look confidently and heroically out over the land they will soon unequivocally possess. Finally, in “Night Spirits” Moffatt drives deep into the outback, late at night, to areas where the Aborigines once, perhaps, hunted, and takes photos in the absolute darkness there. Photographing into the darkness resulted in ghostly shapes and images on the photo over otherwise benign highway or street scenes. These shapes and images can visually represent the true horrors that took place on aboriginal land and which can still be sensed and even captured, if one is willing to directly address the largely unaddressed tragedy that has occurred to the indigenous people of Australia.
Posted by Daniel Gauss at 3:50 PM