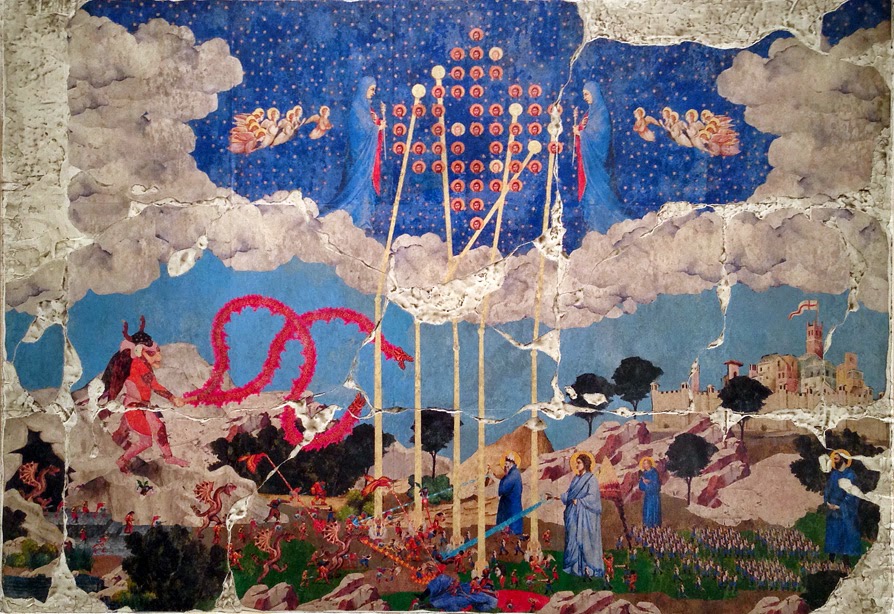 Εν Τούτῳ Νίκα - In this sign you will conquer!

These were, allegedly, the Greek words Constantine saw in the sky, which led to his conversion to Christianity before the Battle of the Milvian Bridge (313 ACE).  According to the legend, his troops entered the battle under the banner of Christianity and bearing the sign of the chi-rho (a two-letter symbol for the concept of ‘Christ’) on their shields.  This would, therefore, mark the first time an army was led into battle under the Christian banner.  Ostensibly, in Daniel Hernandez’s latest show at Kim Foster (as he explained it to me), he parodies this use of Christianity (throughout history) as a rallying cry to battle and a banner under which to fight.

Yet, I think there’s much more to his pieces. His work also parodies the religious quest itself – which often pits the ‘quester’ against the ‘adversary’ using military metaphors.  His work also questions what the social functions of a major organized religion are and can become and how it might become possible for entire cultures, who share the same basic values, to go after each other with the sole purpose of destroying each other’s religion.  In his pieces we see Christianity as a cultural marker that motivates confrontational and destructive action at the same time that we see the individual spiritual quest represented purely in aggressive and militaristic terms.

Modern scholars are, by the way, beginning to believe the story of Constantine’s conversion to be a hoax, in that the Arch of Constantine in Rome only bears Mithraic and ‘pagan’ religious references in regard to Constantine’s victory.  If Christianity was such a factor in his victory, why the heck aren’t there any crosses or chi-rhos on the Victory Arch?  It seems more likely that various social pressures later compelled Constantine to embrace Christianity, and like in most corrupt bureaucracies, the Roman authorities merely concocted a dramatic cover story and backdated stuff.  The Templars, believe it or not, also adopted the saying “In this sign you will conquer!” when they were battling the Muslims in Jerusalem and surrounding environs.  So folks definitely used the banner of Christendom to charge into battle – sometimes against the heathen and sometimes against fellow believers, whether Constantine was the first or not. But the Constantine story, hoax that it seems to be, clearly set the stage for the type of future Christian-inspired battle carnage Hernandez pokes fun at.

You definitely see this happening in Hernandez’ pieces.  You’ve got the religious icons and the little figures fighting under them.  The clear implication seems to be that within the overall rubric of the central religious icon, the battle rages – for the icon and under the icon’s protection.  Edward Gibbon, of course, claimed that Christianity destroyed the Roman Empire because Christians were egalitarian pacifists.  Au contraire Ed, you only studied one aspect of this religion.  Recent research suggests that Christians made up sizable portions of Constantine’s army, were dang good fightin’ men, and may have, ultimately, been THE pressure to force an adoption of their religion on the state. 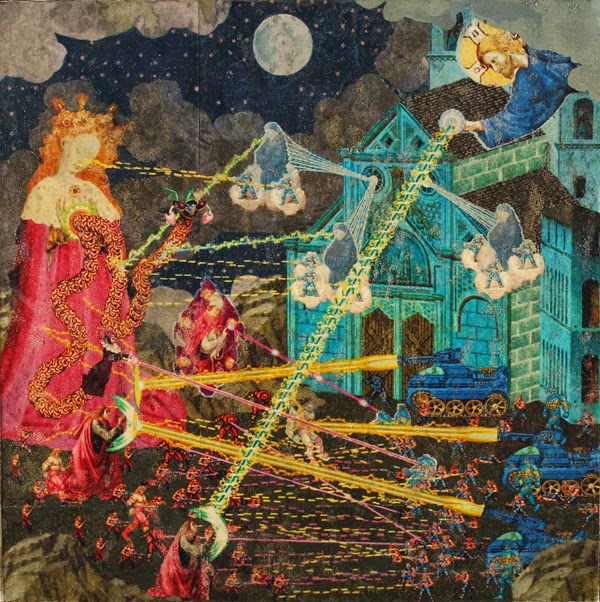 It’s true there is an egalitarian ethic in the Gospels, but who, other than Quakers, ever took that seriously, I mean, really seriously?  Christianity became the ideal religion for the Roman Empire because it allowed a social transformation that gave a moribund system one last chance at survival.  Christianity and not paganism became the perfect ‘city’ religion because of the social values it promoted – fairness, toleration, mercy tempering justice – these were the principles this religion gave the Roman Empire (not hippy free love).  Equality never meant social equality, it meant equality in the eyes of God.  So actively participating in the operations of a stratified society – including military service – was never anti-Christian, especially after Augustine’s “justifiable war” theory.  History shows Christian guys became pretty fearsome warriors a la Chuck Martel, Karl der Gross, Dick the Lionhearted, Audie Murphy et al.

But as Kim Foster pointed out in her notes to the show, the show is called “Genesis” for a couple reasons – one of which is that the painter hearkens back to the days when the Sega Genesis hit the market and helped revolutionize computer games.  I was never into this stuff, but based on some research it looks as if the Sega Genesis made battles look more realistic and made enemies tougher to kill.

So what I think is hilarious about the paintings is that Hernandez establishes a direct parallel between the video game soldiers destroying their enemies and the belief that attaining to Christian perfection is a type of spiritual battle in which you confront and destroy an (inner) enemy. Paul started all this military metaphor stuff in the Bible.  Gird your loins and all that!  Although Christianity is the religion of peace (aren’t they all!?), even the guys who wrote the “New” Testament liked to envision spiritual ‘combat’ with the ‘enemy’ in military terms.  This stuff is all over Paul’s letters to all the guys he wrote to.  It’s a fight or a struggle and we’re trying to gain spiritual victory the way some little kid was vaporizing monsters on his Sega Genesis.  Our metaphor for spiritual development and elevation to a higher level of being is, basically, a metaphor of conquest and destruction and essentially the same thing as some pimply-faced kid zapping aliens on a computer screen. 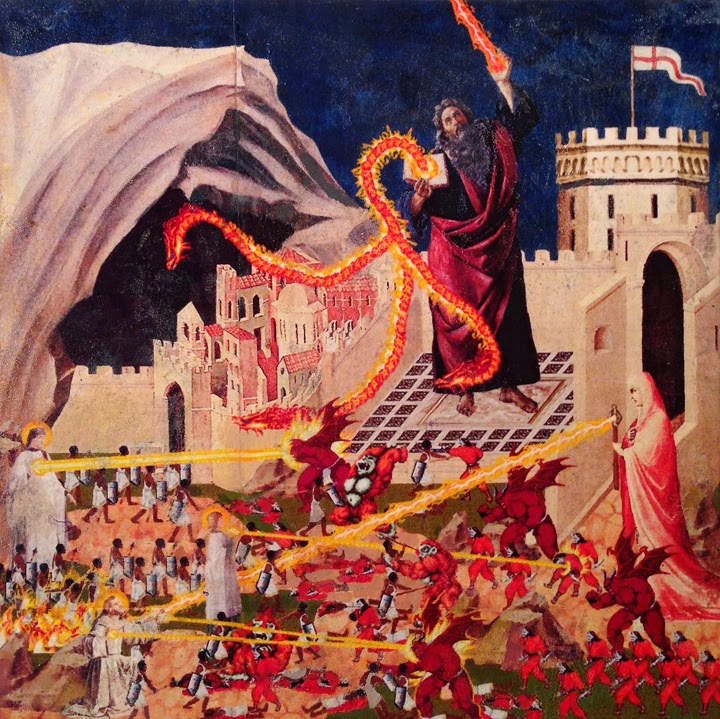