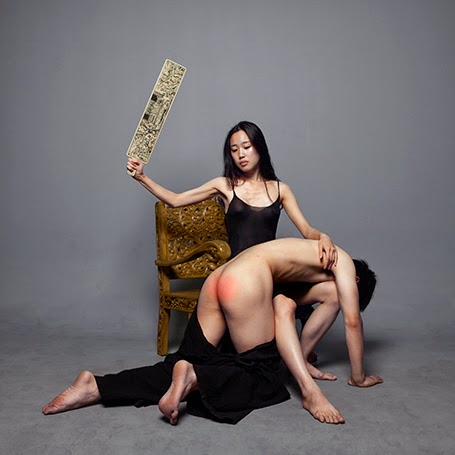 CHANG jia deliberately tries to make the viewers of her work feel uncomfortable.  For example, she once did a video where you see a jolly looking woman being hit continually in the head with eggs.  Periodically a man shoves her in the head, grabs her hair, yanks it, messes it up, shoves her around again.  After her initial shock each time, she recovers the jolly expression on her face.  In another piece, in a recent show in Korea, she filled intravenous bottles with human urine and she even constructed a tree-like structure bearing scientific beakers and bottles of pee.

Her current show consists of a few representative pieces of her overall work.  For instance there is one image from her series of a woman standing and peeing.  There are also two images of a woman spanking a nearly naked man with a very ornate paddle.  On the paddle are various detailed scenes of torture.  So this is not an impetuous spanking using anything at hand, this is a deliberate act by a person who has studied the art (craft) and who has a professional interest in being an expert (the possibility for fetishism is there, but I don’t think the artist is necessarily going in that direction). 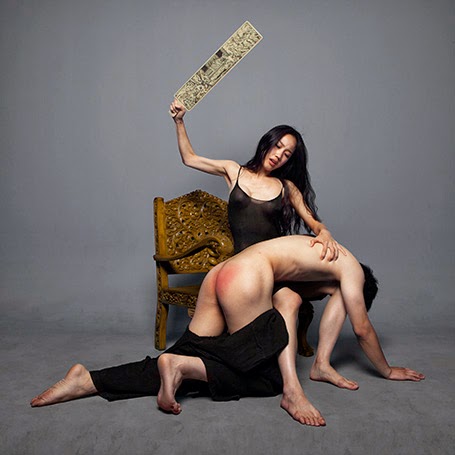 Professional interest? Well, in Singapore, for instance, there are guys who are professional ‘caners.’ They still use corporal punishment there and guys show up to work each day to practice using a thick bamboo cane to flog the backsides of ‘criminals.’  That’s their job (Singapore being a pleasant-looking backward dictatorship).  In the photos by CHANG you can see that the guy’s backside has been seriously tanned by this lady, who seems to mean business.  Indeed, in the little card next to the piece we read that the guy’s butt is red for a reason – she has, indeed, been working his backside over. So this theme of people literally being abused recurs through her pieces.

The most disturbing images in the show, however, involved a kit of ancient torture instruments with a placard detailing what each instrument was for. (In the video below this review you can see the torture instruments at about the 22 minute mark.) I’m not even going to relate the functions of some of the devices, but let’s just say it probably took some creative and heartless bureaucrats some amount of time to figure all that out.  In fact, that’s probably the point.  What is it that drives us to the point where we can readily inflict horrific pain on others?  Racial and religious prejudice? Personal hatred?  Class/economic resentment or contempt? Ideology?  Or, is it both cruel and beautiful, as the title suggests.  There was, after all, some controversy created last year when it was alleged that Mother Theresa, herself, had liked watching cancer victims writhe in pain because she felt it brought them closer to God.  The torture kit reminded me a bit of the scene in Godard’s Le Petit Soldat where an educated and beautiful woman sits in one room reading a book by Lenin while her male friends  employ electrical torture methods on a guy in the next room. 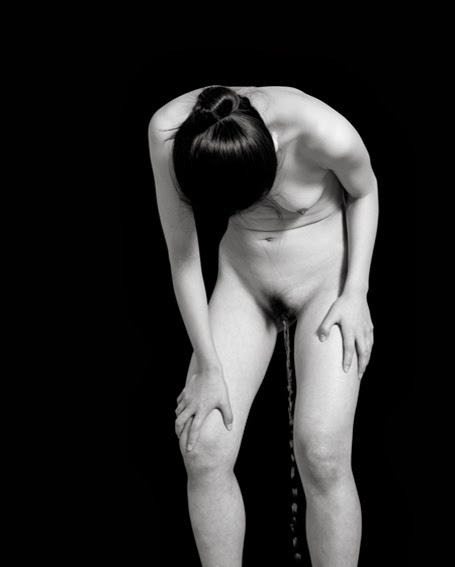 So what’s the point?  Well, first I like art which tries to go beyond symbolism and allegories and which reaches folks on a more visceral level.  But I think the artist is really questioning the extent to which we can use art to really grab each other in a meaningful way.  One way to reach the emotions of others is by revealing the pain of others.  John Locke, for instance, pointed out, in response to Hobbes, that when we see others suffer we suffer too.  Our suffering is not exactly their suffering, but it’s enough to motivate us to stop the suffering of others – or it should be. 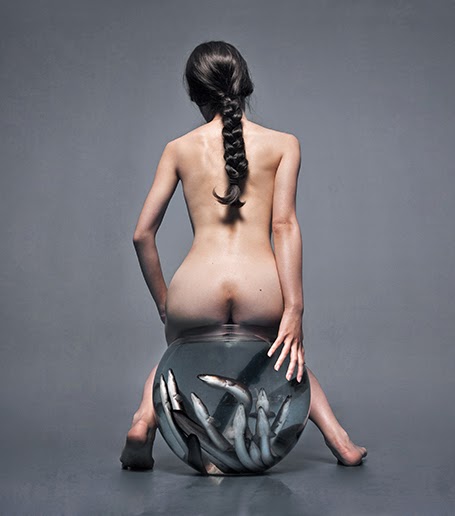 So this is not pain for the sake of pain in this show – it is pain to reach us and provoke thought and emotional responses and action.  And it does its job.  In CHANG’s video (not in this show) when you see the woman being hit repeatedly, you want to stop the violence and you feel sad that she is enduring it with a smile on her face.  You are helpless and, truly, uncomfortable knowing you can’t do anything.  Interestingly, however, CHANG may also be hinting at something darker.  She seems to imply that perhaps we all harbor, whether we want to admit it or not, sadistic and masochistic streaks and that, deep down inside, many of us like inflicting and/or receiving pain and this is a component source of the aspect of ‘official’ torture and harm in the world. So to a great extent she’s inviting each of us to look at this in ourselves and address it somehow. 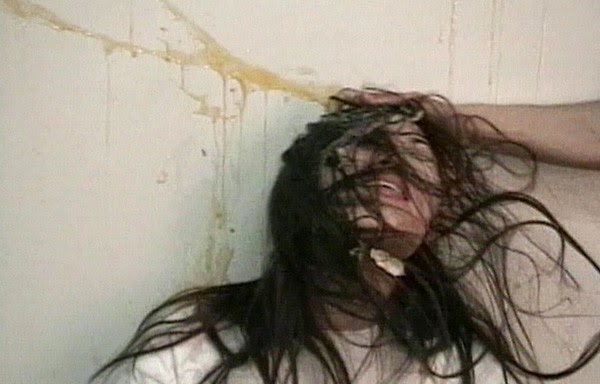 But I think the big point she’s making is that art is a really limited language for human engagement.  Using art we can only reach each other to certain limited extents.  We can reveal pain, we can solicit compassion but art does not seem sufficient to create compassion or integrity or meaningful social action.  Art primarily represents or expresses and to some extent can engage, but not to the depth that some truly humane artists might want to reach others.  Still, CHANG is engaged in a thought-provoking and controversial endeavor.  She embodies the raw, performance art aspects which have often been abandoned for cheap sensationalism and glitz in the contemporary market.  If art is a limited language for human engagement, CHANG seems to be challenging us to go beyond art and to take our very humanity out into the world in order to transform it as much as is possible.

In this video below - starting at the 15:21 mark, you can see what this New York gallery show looked like. You can see the bricks she made out of cow blood, the torture instruments etc.