As Jeffrey Deitch (former Director of MOCA) said at Mana Contemporary recently, if you were to think of the most prominent of contemporary American artists, Judy Chicago would have to be considered in the top five. This is true even though stuffy traditionalists like the Art Institute of Chicago, MoMA and the Metropolitan Museum do not have a single one of her pieces in their collections.  Why is she so important yet so neglected? 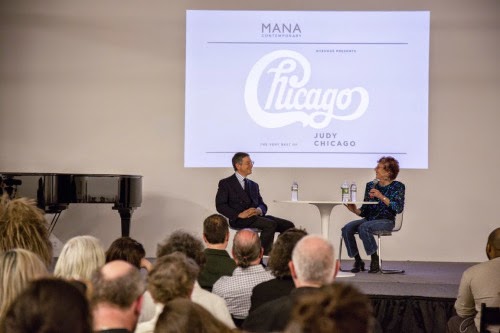 Well, she single-handedly challenged the old-boy network of American art, she legitimized the feminine experience/perspective in the art world in America and she virtually created the concept of ‘feminist art’.  Why she’s been neglected by the major institutions was one of the topics when Mr. Deitch sat down with her at Mana Conemporary on the 12th of this month for a Q and A session with an audience that had come for a celebration of the artist’s 75th birthday.  Judy ‘Chicago’ was, by the way, born Judy Cohen, but changed her name to “Chicago” as a way to eschew the prevalent naming-system based on the adoption of male last names. 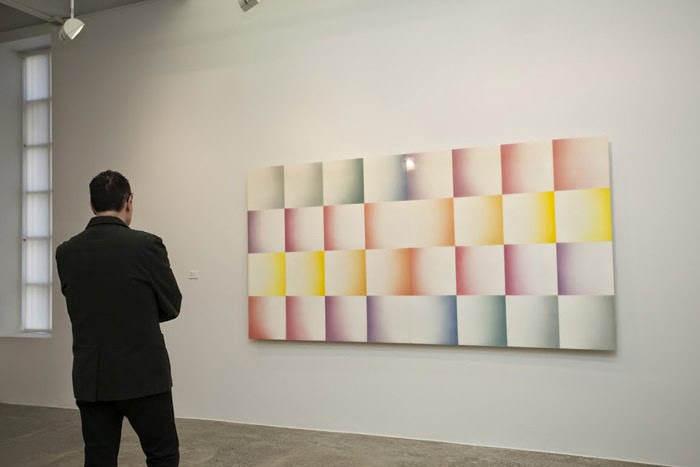 Mana Contemporary, in case you’ve never been to this amazing place, is a huge art complex that provides exhibition space, artist studios and a performance theater.  The rationale for the place was to create a type of artists’ ‘kibbutz’ where a ‘hive’ system or ‘campus system’ allows cross-fertilization and endless inspiration as well as the meaningful production of cutting-edge art in various genres.

Deitch began the informal chat by pointing out that Chicago had “…extended art into the social realm…” and unabashedly attempted to “…use art to change society.”  Chicago explained that her orientation toward using art as a means to have an impact in the world came from her dad, who had been a labor organizer. Unfortunately, her dad was a victim of the McCarthy era and suffered greatly due to his political convictions and actions. Judy mentioned that due to the cruel treatment of her father she had to choose, as a child, between “…my own experience and what the world was telling me…” because folks like her father were being publicly branded as traitors and worse.  At this time she developed a sense of intellectual independence and felt that even if everyone believed one thing, she would have to have the strength to take a dissident position, if necessary. She openly attributed the strong values that she has shown in her work to her father and stated that her dad inculcated a sense in her that she needed to make a contribution to the lives of others.

From what I understand, just as her dad inculcated a sense of moral rectitude and righteousness in her, her mom encouraged her artistic abilities.  She began drawing when she was 3 and first visited the Art Institute when she was 5. She soon began taking weekly classes there.  Interestingly, and this drew a chuckle from the crowd, she stated that when she started making weekly trips to the Art Institute of Chicago, she simply didn’t notice that all the art there was by men.

Chicago also pointed out that her career was not propelled in a traditional manner; indeed, the established and respected folks of the art world made it extremely difficult for her to gain greater public access.  Deitch pointed out that half of Chicago’s UCLA art class was comprised of women, but after graduation, Judy Chicago was, basically, the only woman artist trying to make it in the LA art scene. 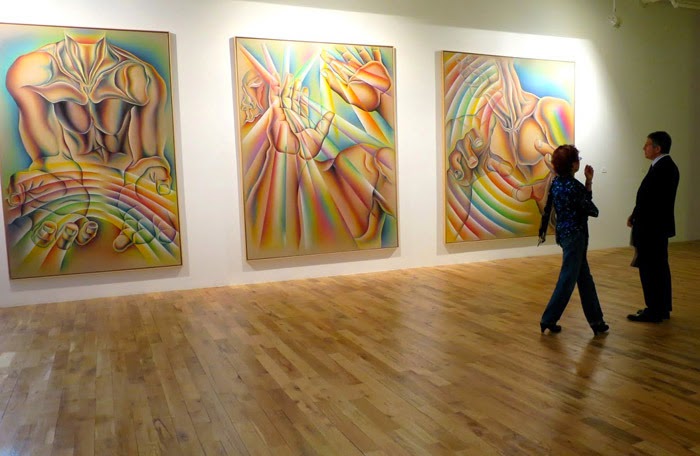 Chicago even mentioned the name of a famous curator who would visit a studio which she was sharing and who would look at the work of the two guys there but not her pieces.  Her goal, like the goal of most artists, was to be taken seriously.  Chicago stated, “I was not a careerist artist.”  Yet, she would continually create meaningful work and “…nothing would happen.” So in those early, dark days, Chicago felt that all she could really do was stick to her guns, create more work and wait for an opportunity for greater exposure. 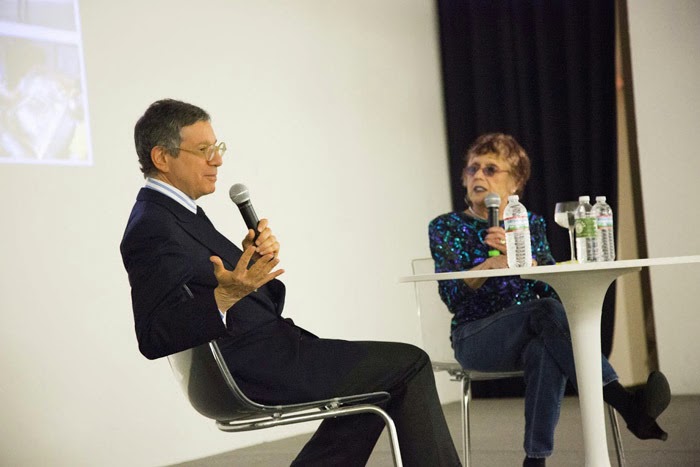 In discussing the male-dominated art world, Deitch stated that many people seem to have a misconception.  He asserted that there is no “pope” of the art world and that art in America is, in fact, a very “open system” where, potentially, even one blogger can have a positive impact on an artist’s reputation.  So why the long-standing exclusion of women?  Deitch seemed to deny any overt collusion but said that the lingering situation comes from all angles, and it is not due to a small cabal.  Chicago countered by saying that this system seems to exist because “…people don’t feel they have the power to fight.”   She recommended that the progressive gallery orientation toward ‘all-women’ shows should be abandoned for a system of ‘equal public space’ in which we get a more balanced percentage of women artists vis a vis men. She stated that women artists are still forced to create around a male-centered narrative and Deitch pointed out, as I mentioned above, that Chicago’s works are not found in The Art Institute of Chicago, MoMA nor The Metropolitan Museum, although she is one of the most famous artists in America today.  Thankfully the Brooklyn Museum has provided a permanent space for her iconic ‘Dinner Party’ – a massive project from the 70s in which she created 39 ceramic plates, each bearing a different type of stylized vagina, to represent the history of women throughout the ages. 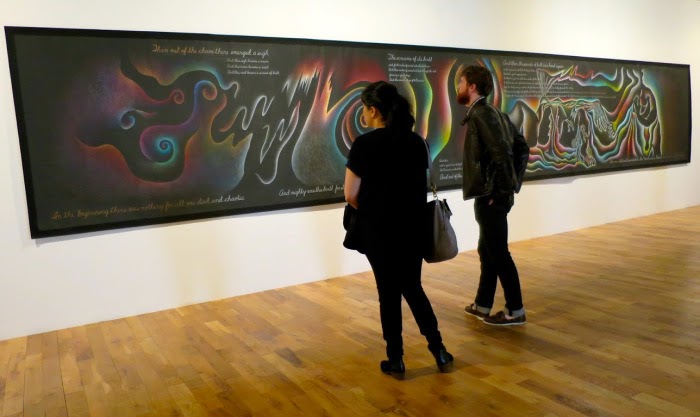 The purpose of the retrospective at Mana seems to be to show that Chicago’s work stands on its own, separate from her activism in the art world – basically she should be famous for her art and not necessarily for her activism.  Yet, it seems indisputable that Chicago’s legacy will involve the fact that she brought greater attention to ingrained sexism in the arts and she added ‘the feminine’ as an autonomous category into art.  Women had been forced to ‘integrate’ into art following male patterns or narratives, but Chicago was a part of the movement in the early 1970s that recognized ‘the feminine’ as a unique experience and something even potentially healing to society. I’m reminded of Carol Gilligan’s book (of a decade later) In a Different Voice, which showed that in regard to ethics, men believed in ‘justice’ and ‘punishment’ while women tended to believe in ‘mercy’ and ‘forgiveness’.  Chicago seems to have started this trend in the arts – the feminine artist could bring feminine/feminist principles to this field and help humanize art even more.  Indeed, implicit in developing a feminine perspective is the fact that art can be open to multiple narratives from various social, ethnic and gender sources.

Throughout the show you can see that Chicago was using forms and colors that were not a part of what goaded her to engage in what she called ‘male drag.’  In the LA art scene she noticed that there were even ‘male’ colors that were predominantly chosen by the favored artists and she bucked this trend early by using what were considered to be more feminine colors.  The show contains two of her early “Car Hoods” and progresses through to more recent work. 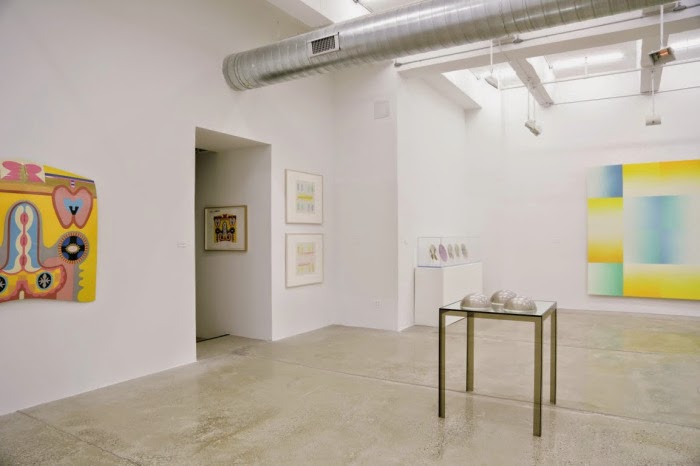 The two pieces that were most meaningful to me were a video of a pyrotechnic display in which Chicago had ‘feminine’ colored fireworks shot into the night sky to “soften and feminize” the environment and a large painting dealing with the birth of the universe.  Think about it – what is the prevailing scientific theory for the creation of the universe? Basically the Big Bang Theory is like a metaphor for a giant explosion of semen from an anonymous, mysterious, eternal penis from which everything in the world springs.  So even astronomy is dominated by male-centered narratives.  Chicago counters this with a narrative of creation based on ‘birth’ and not a ‘big bang.’  The ending text written on the piece is: “A last wail sounded in the universe as woman was born on earth.”   This seems to convey the extent to which the feminine has always stood as a counter-balance or force against the most aggressive and destructive of patterns, not just in humanity, but in nature itself.
Posted by Daniel Gauss at 9:24 PM