"Religious" prints at the Museum of Biblical Art in Manhattan 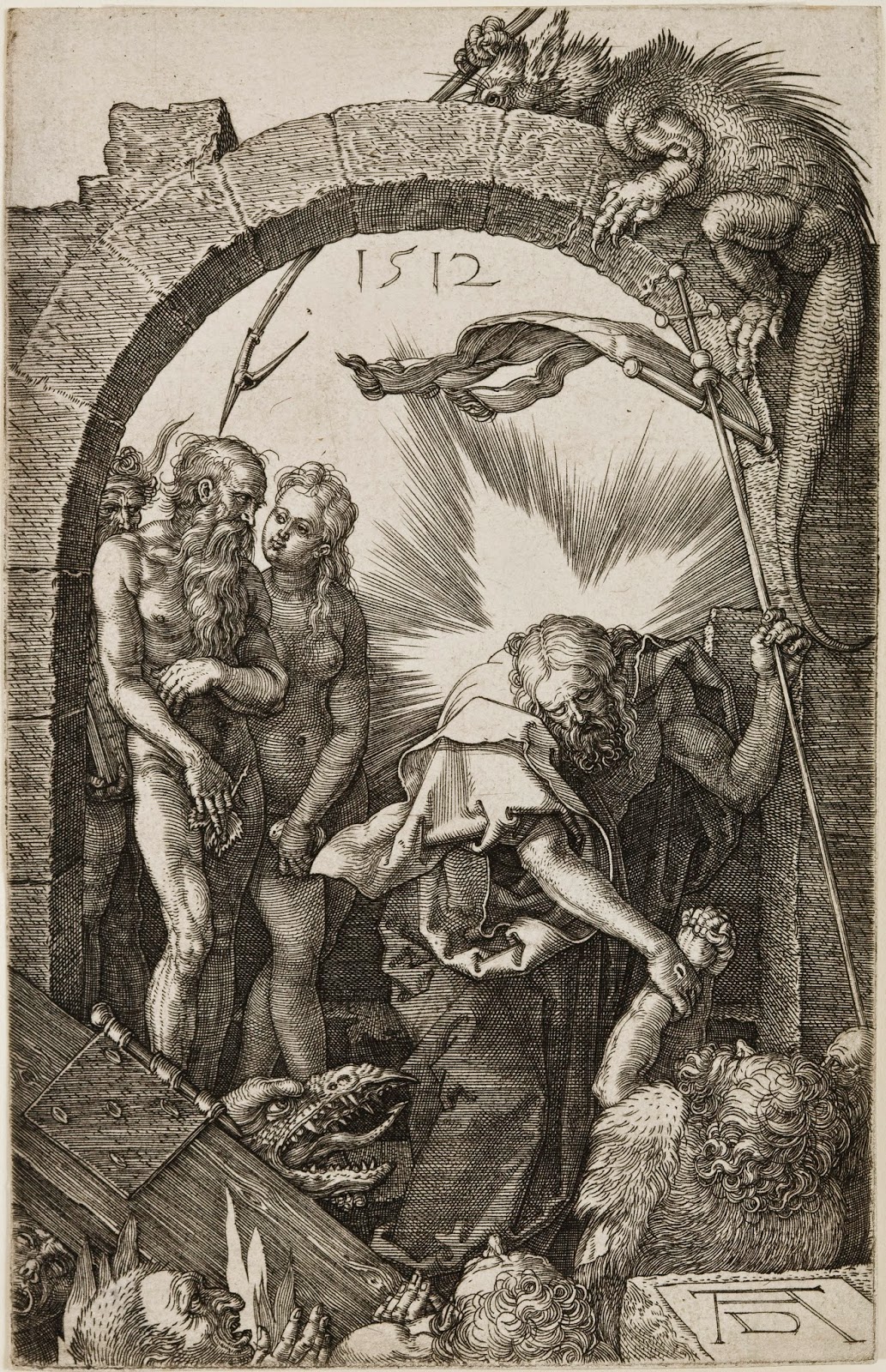 As Director Richard P. Townsend explained during the press preview, MOBIA is following up its Back to Eden show with something a bit more unassuming and introspective, before rocking New York City with their Sculpture in the Age of Donatello show this coming February. The current show features prints by Durer, Rembrandt, Tiepolo, Blake, Manet and Pechstein, works collected by the Jansma family of Grand Rapids Michigan and normally featured at the Grand Rapids Art Museum.  MOBIA has been presenting amazing shows for nigh 10 years now, is absolutely free and you are welcome to drop by and stroll around at your leisure. 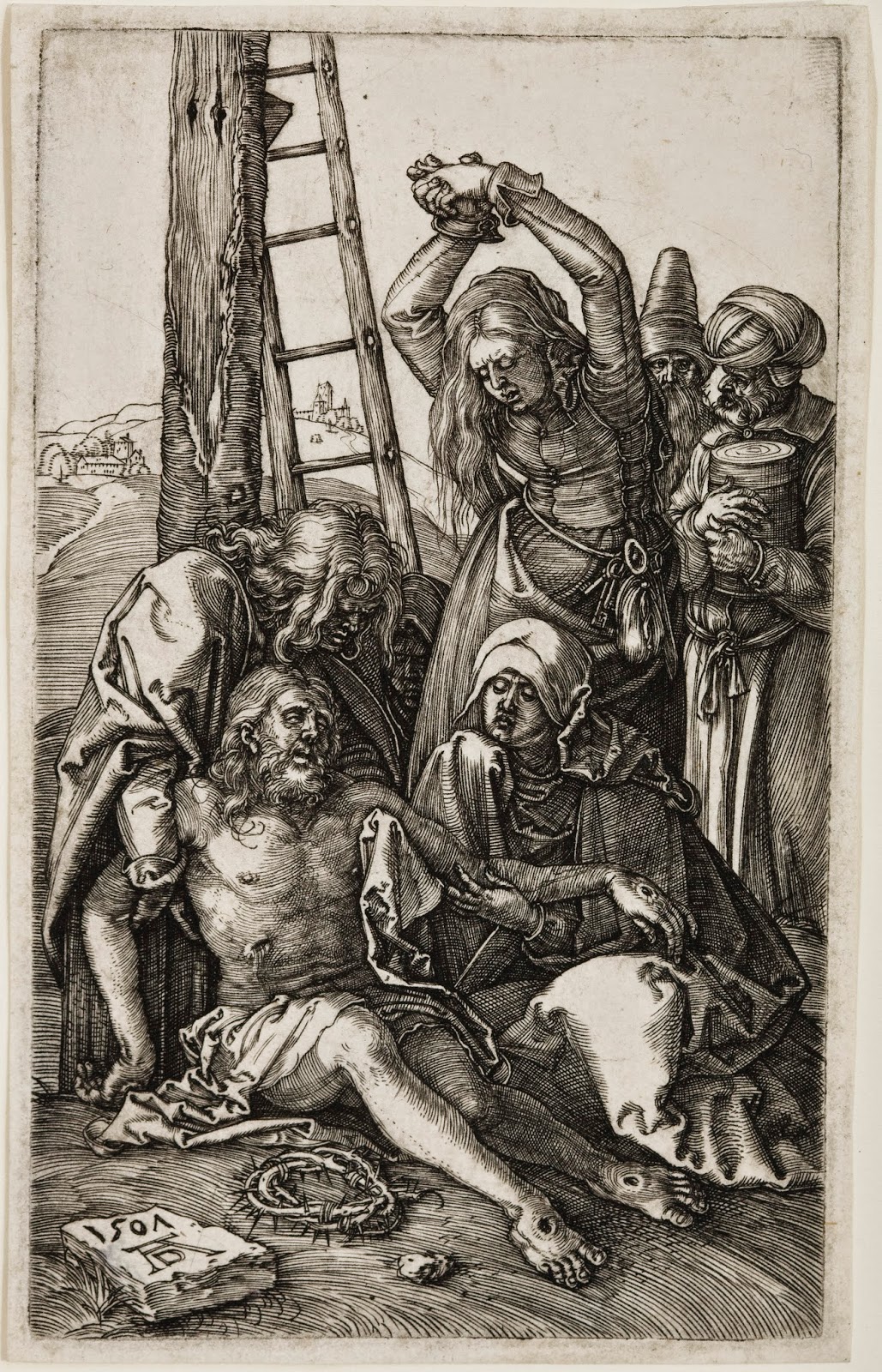 According to the notes for the show, printmaking started in Europe in the 15th century as a way to produce inexpensive ‘devotional’ images for folks.  Religious images could thus now be displayed in one’s home to help one focus more intently on one’s prayers.  Yet, after the Reformation, starting in the 16th century, ‘artists’ got their hands on this technology and starting moving away from devotional images toward a more secular, yet deeply meaningful, humanist narrative style. So in Durer’s print of Jesus removed from the cross, we don’t get the St. Paul machine politics line that He “…died to cleanse our sins, be grateful and pray to Him…”, we see a guy who has been tortured to death and the emotional shock of those who bore witness to the senseless persecution of an innocent and harmless whistle blower. 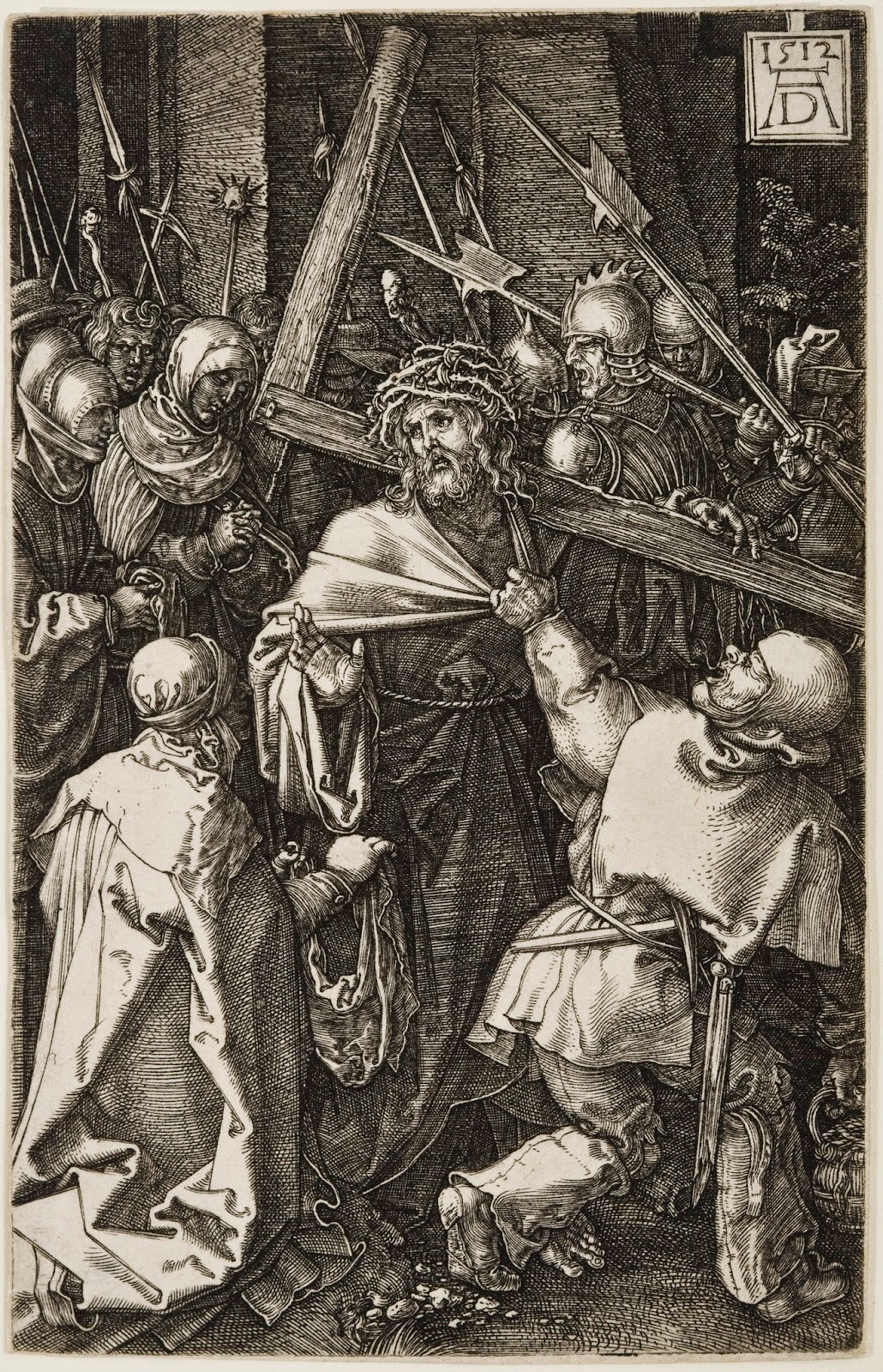 If you love Rembrandt as much as I love Rembrandt you could spend an hour or more looking at the various prints they have displayed. They’ve got The Three Crosses in this show, which is considered to be one of the most amazing prints ever.  I really liked, however, the print of Jesus unceremoniously teaching in a public area. 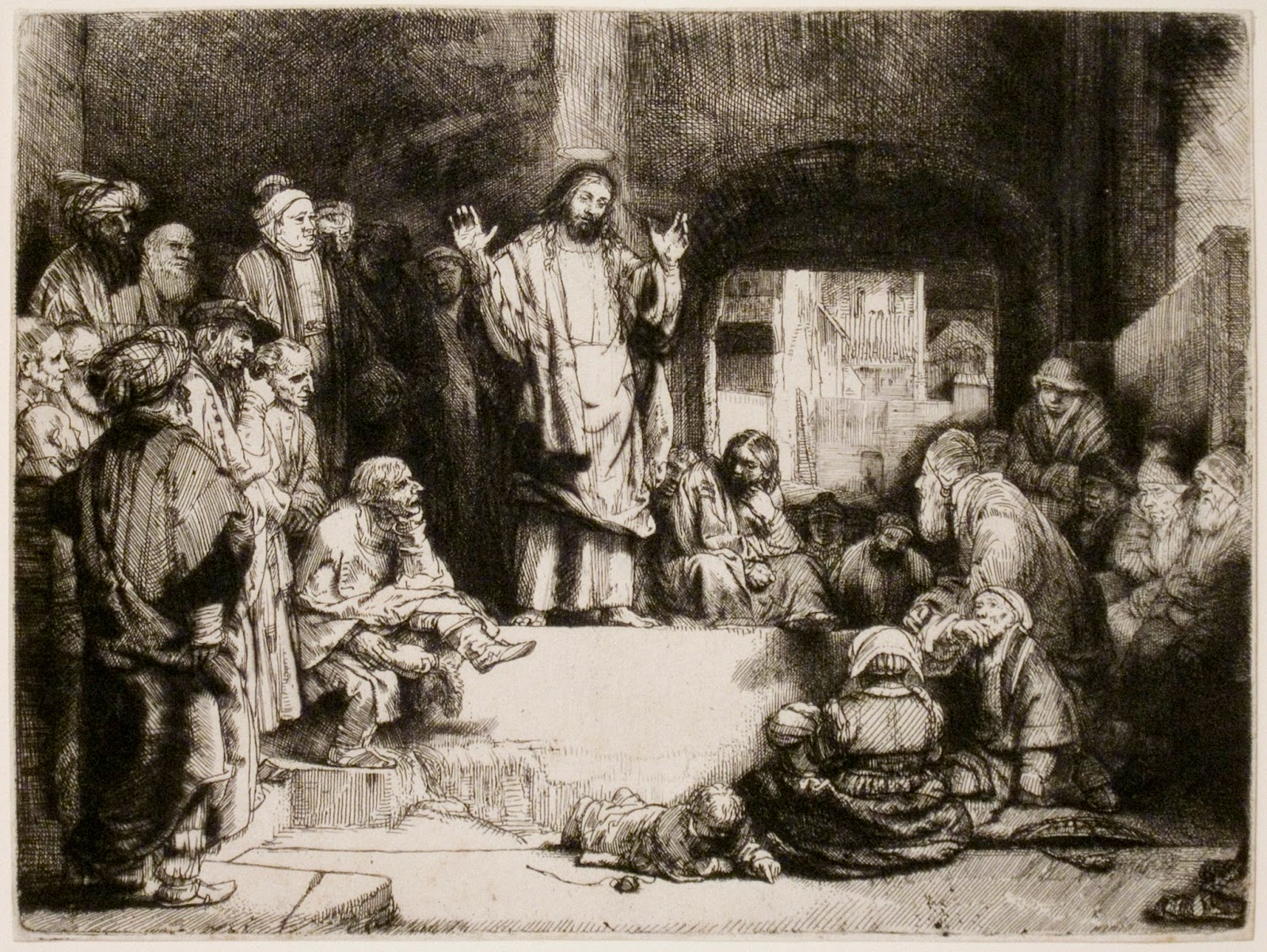 You see his humility and the engagement of others who are clearly being influenced and moved by his message – not the message that Paul gave much later either; this is Jesus’ own message: there’s a new type of life available for you right now, a life of joy and kindness and deep humanity. 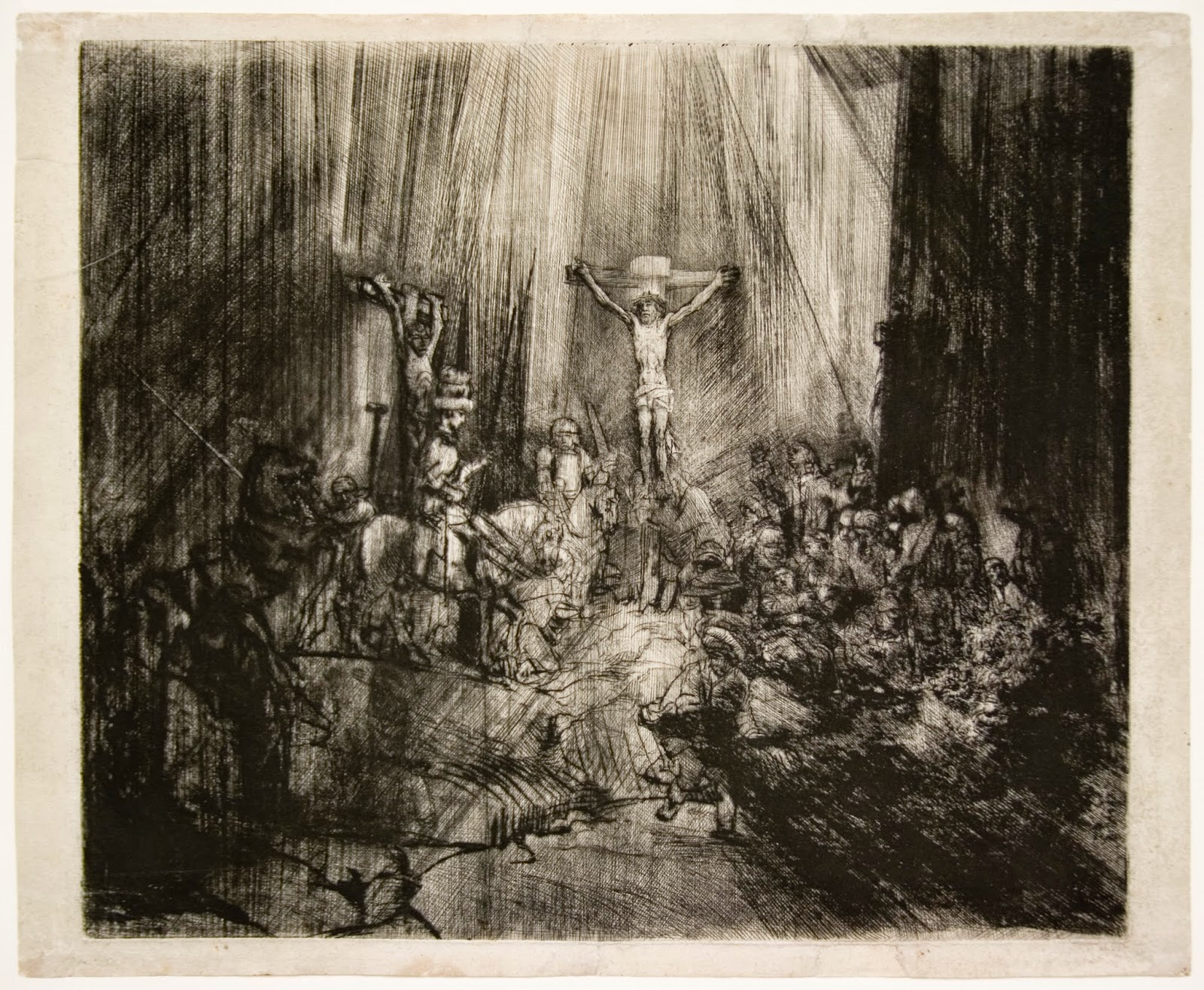 Among the other pieces there’s a remarkable print by Manet which seems to hearken back to and even answer Mantegna. We see Jesus in a type of transition during the process of his resurrection. Like Mantegna we have foreshortening of the body but unlike Mantegna we also have hope and faith in the impossible. 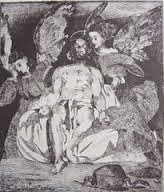 Blake is also represented here with some illustrations for the Book of Job.  I always felt that the Book of Job was more of a comedy than anything.  In religious wisdom literature you are admonished to be righteous and God will reward the righteous and smite the unrighteous.  But the unrighteous are often unsmote and unsmotable and the righteous get smitten.  So Job gets smitten because of some Vegas style truth or dare competition between God and Satan and his friends/comforters can’t wrap their brains around the fact that in this world, although we see it every day, the innocent suffer and the rotten guys prosper. Job is a challenge for religion to open its eyes to reality and start answering the tough questions that people want answered.  So I particularly liked the drawing of God finally presenting himself to Job – Job’s refusal to take the easy answer (his friends try to convince him that he must have done something wrong at some time because nobody gets punished for no good reason) leads to God actually meeting with Job, to, basically, transform Job and apologize. 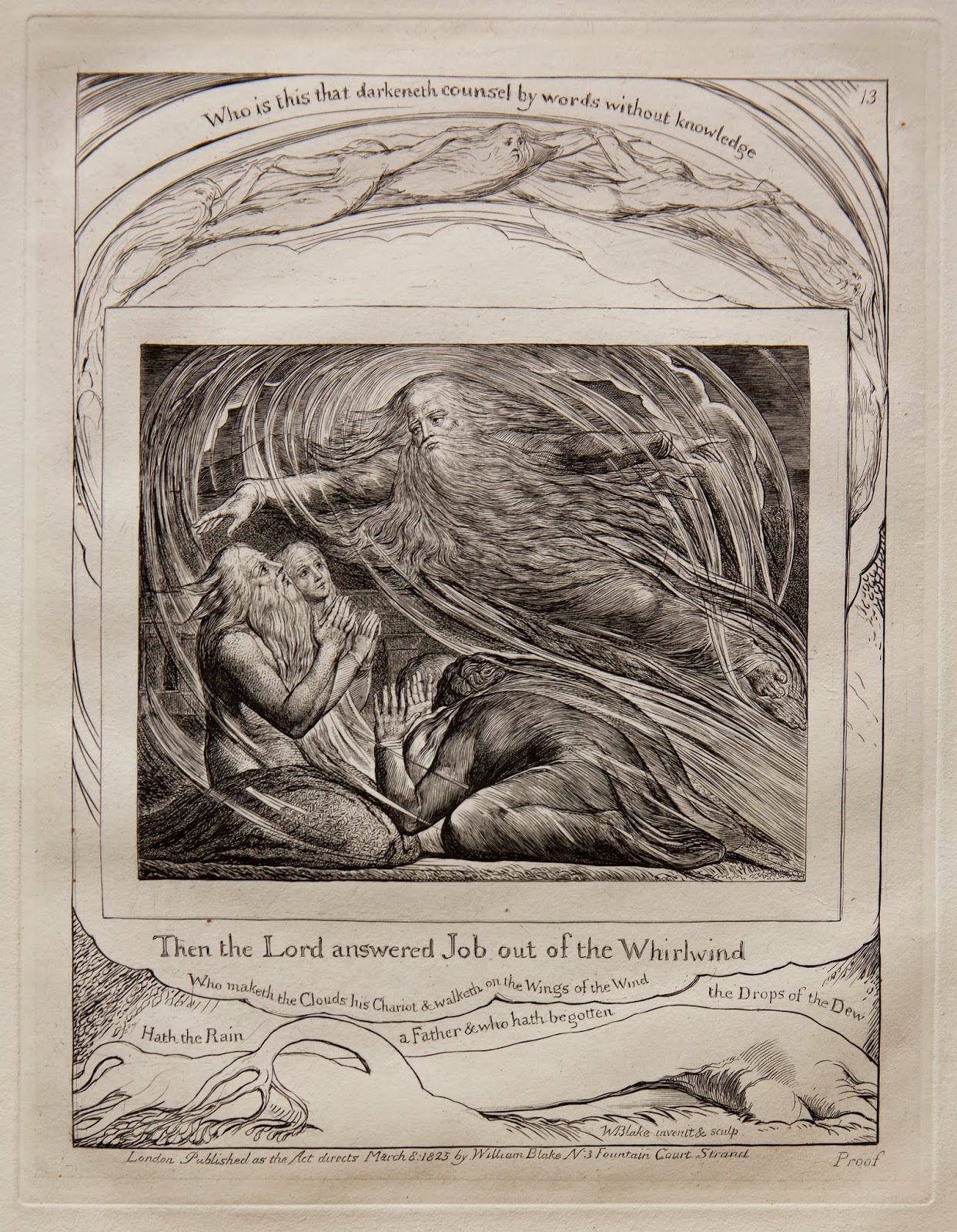 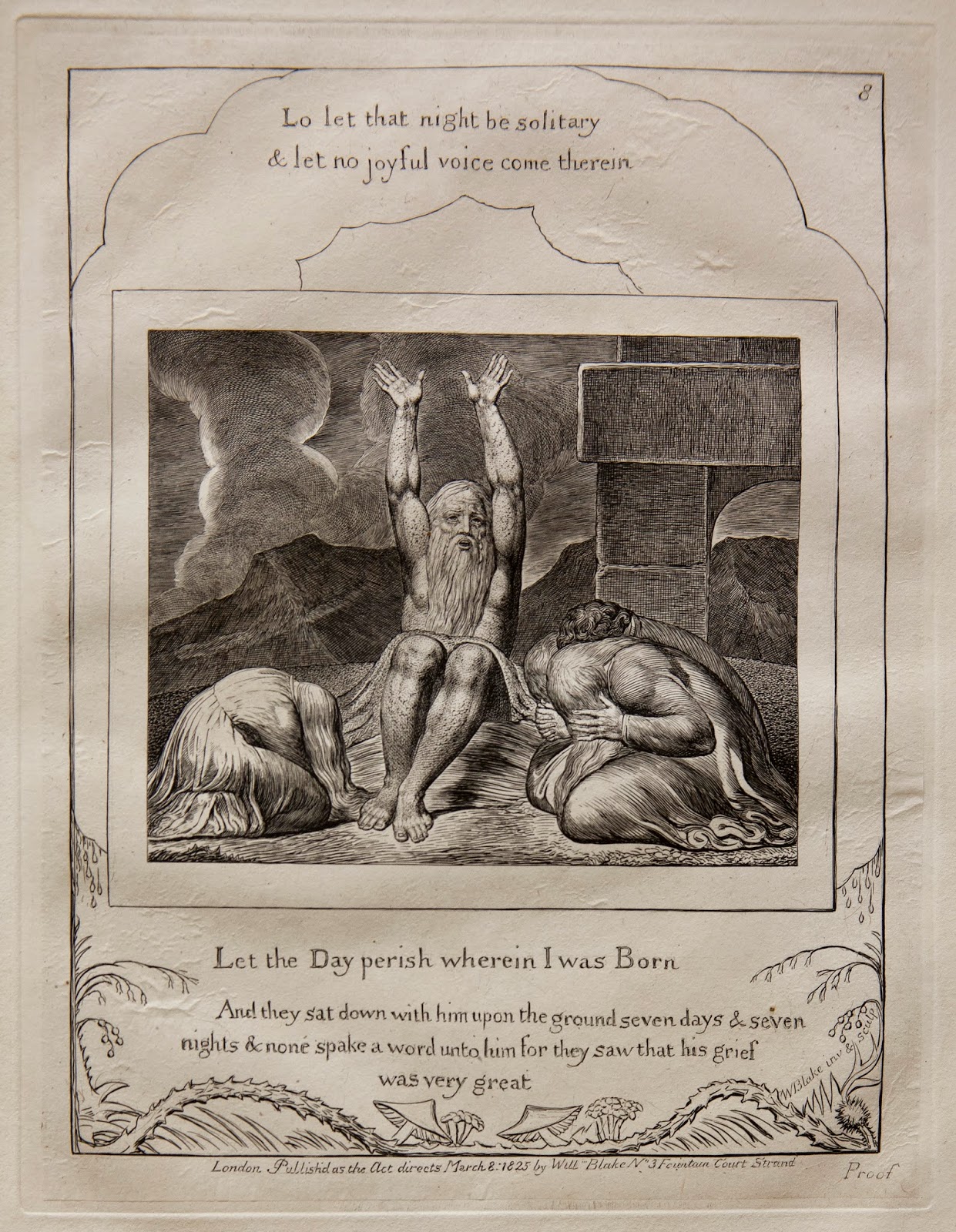 {{{Blake - Blake could be such a drama  queen, actually, I guess Job was the drama queen, here ...again, click to enlarge all these images}}}
Posted by Daniel Gauss at 5:40 PM