The Topsy Turvy World of Boyoung Lee at Hyun Contemporary 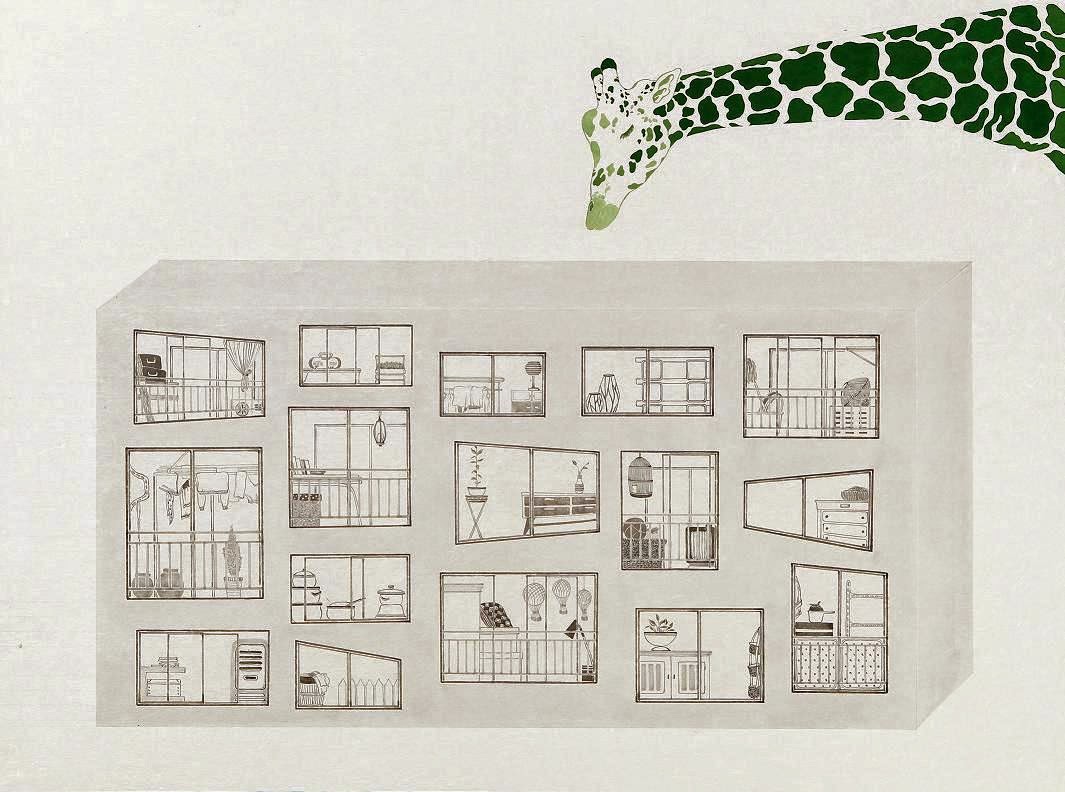 In 1984 E.O. Wilson wrote the book Biophilia, which theorized that there was an inherent attraction that humans felt toward the natural world.  This need to experience nature – even in the depths of the most crowded city - would help to explain why our cities are not completely concrete and steel aggregations of buildings and throughways like Fritz Lang’s Metropolis. Boyoung Lee, whose current show is at Hyun Contemporary, seems to focus on this type of biophilia in the ‘topsy turvy’ world she depicts.

Lee’s very sensitively drawn and captivating images show that nature is something literally transported into the city and that it serves a peripheral, decorative function, feeding our biophilia demons.  You may not know that 70 – 80% of the oxygen we breathe is actually created by photosynthetic ocean dwelling algae, so the practical oxygen-producing function of trees is basically nil in the city.  Even the flora of Central Park was imported into New York by Frederick Law Olmsted. Central Park, as you may know, is a work of ‘landscape’ art. 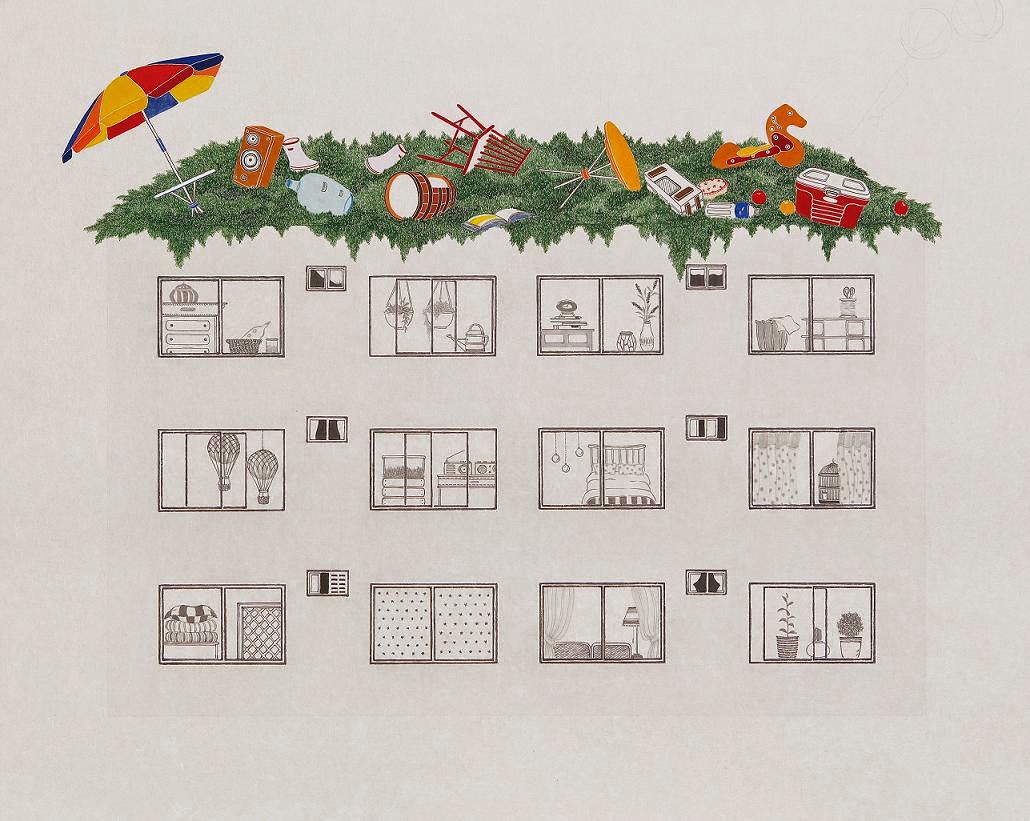 The most salient feature of Lee’s buildings would be the windows, through which you see little details denoting middle class, urban, professional life.  Through the windows everything seems perfectly in place and immaculately tidy. The units seem to be empty, the places of solace and comfort we seek to get to after work to get away from each other in order not to go completely nuts.  The windows become symbolic of our inability to really mesh emotionally with each other – we live separate and secluded, surrounded by the best stuff we can buy, in lieu of feeling a meaningful sense of community.  Nature seems to serve its function in this scheme - in one drawing the roof is overrun by vegetation and the stuff used to enjoy such outcroppings is strewn willy nilly. In another building nature asserts itself by growing wildly from some upper floors. Perhaps biophilia has morphed into some stronger form of dedication to the world we abandoned. 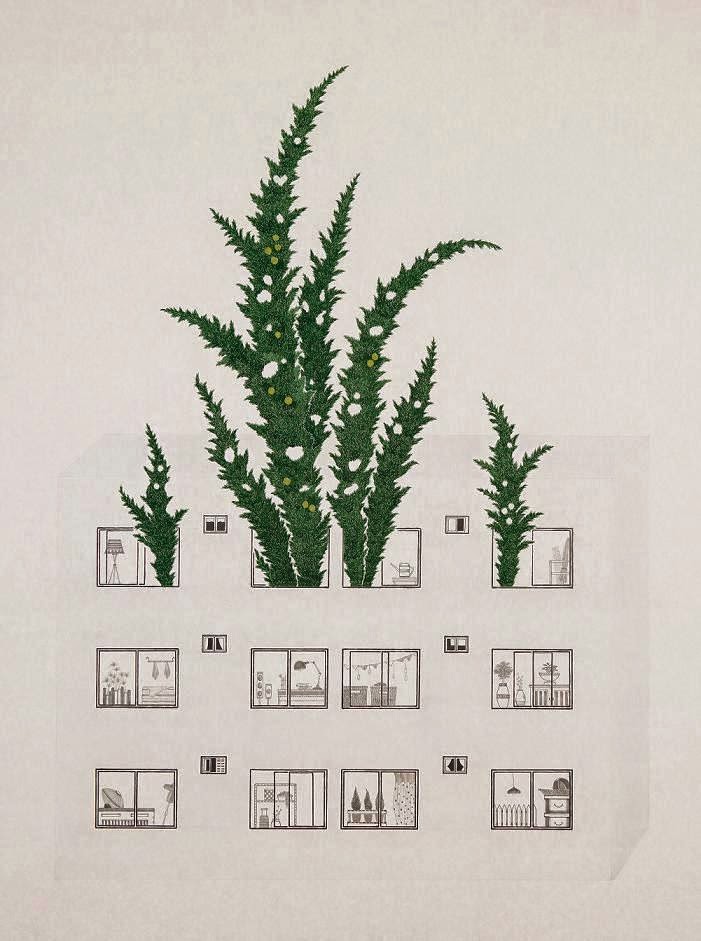 So what’s with the giraffe?  Suechung Koh, curator of the show, told me the giraffe could be a type of bridge between the outside and inside.  I’m guessing that the long-necked, peeping Tom giraffes are nature looking through the windows at the type of life that we have adopted.

I like to think of the giraffe, however, as the ghost of Marius. Remember Marius the giraffe from the Copenhagen Zoo?  The director of the zoo determined that Marius was genetically unfit for reproducing other giraffes.  Although zoos around the world implored him to save the young giraffe, the director was resolved on killing Marius, dissecting him in front of school children and then feeding him to the zoo’s lions.  Using a bolt gun – to ensure the giraffe meat was untainted by poison – Marius was killed, dissected and fed to the lions.  I see the giraffe as his ghost coming back to the world that kept him in a cage as a curiosity and killed him because he wasn’t ‘natural’ enough.  The ghost of Marius becomes the interface of humanity and nature.  We create zoos as places of spectacle, where animals suffer from zoochosis, but we indulge in our biophilia, and we adopt a ‘conservationist’ justification for the facilities.  Don’t preserve the environment, preserve the animals.  Indeed, to me the ghost of Marius haunts the wonderfully creative and evocative drawings of Boyoung Lee. These are such nicely drawn images on such rich paper that you really should drop by and experience them for yourself. 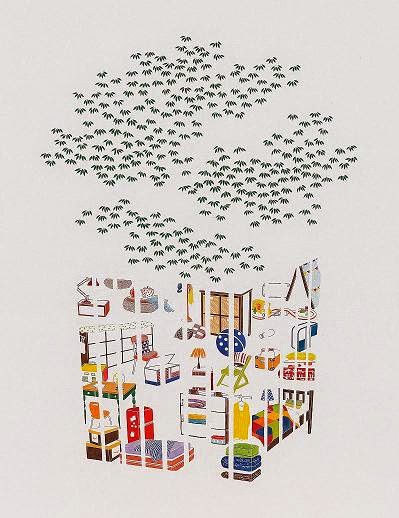