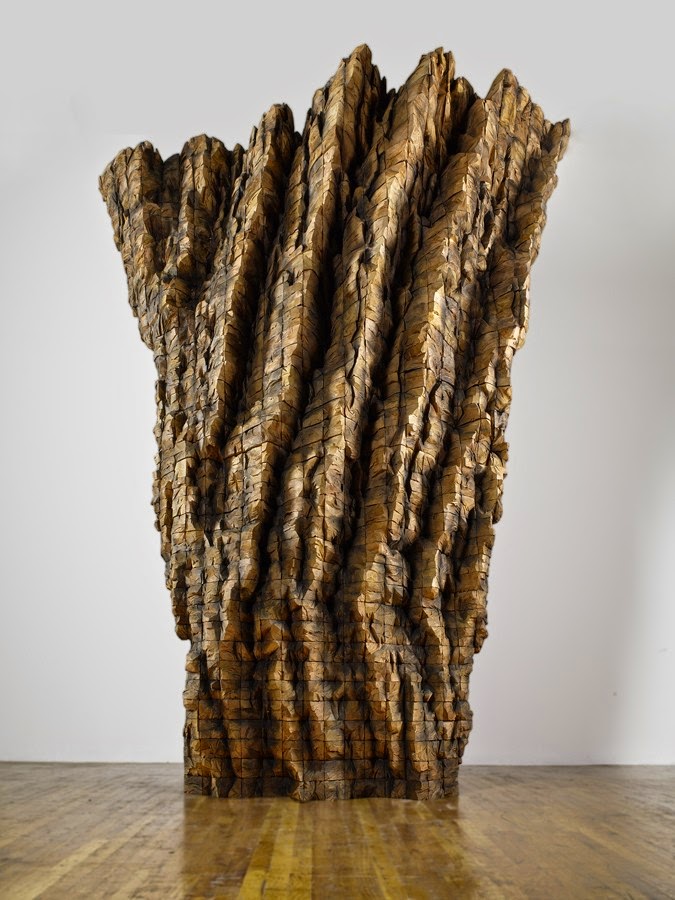 Ancient folks thought of the tree as a type of bridge between the earth and the sky. A tree’s roots dig down deep into the earth and anchor it there, drawing water and nutrients, while the trunk, branches and leaves soar into the air.  The tree is sustained by the photosynthesis in the leaves from the sun at the same time as it is sustained by the water and minerals from the earth. The inner core of the tree is, therefore, the synthesis of processes of the sun and earth in union with each other. So the tree represented a bridge between the earth and the spirit realm or even between our animal nature and our higher nature.  The cross (used well before the Christian era) could well have been a type of ideogram for a tree (the horizontal line represents the earth, the vertical line under the horizontal represents roots and above the horizontal the trunk and branches are depicted). 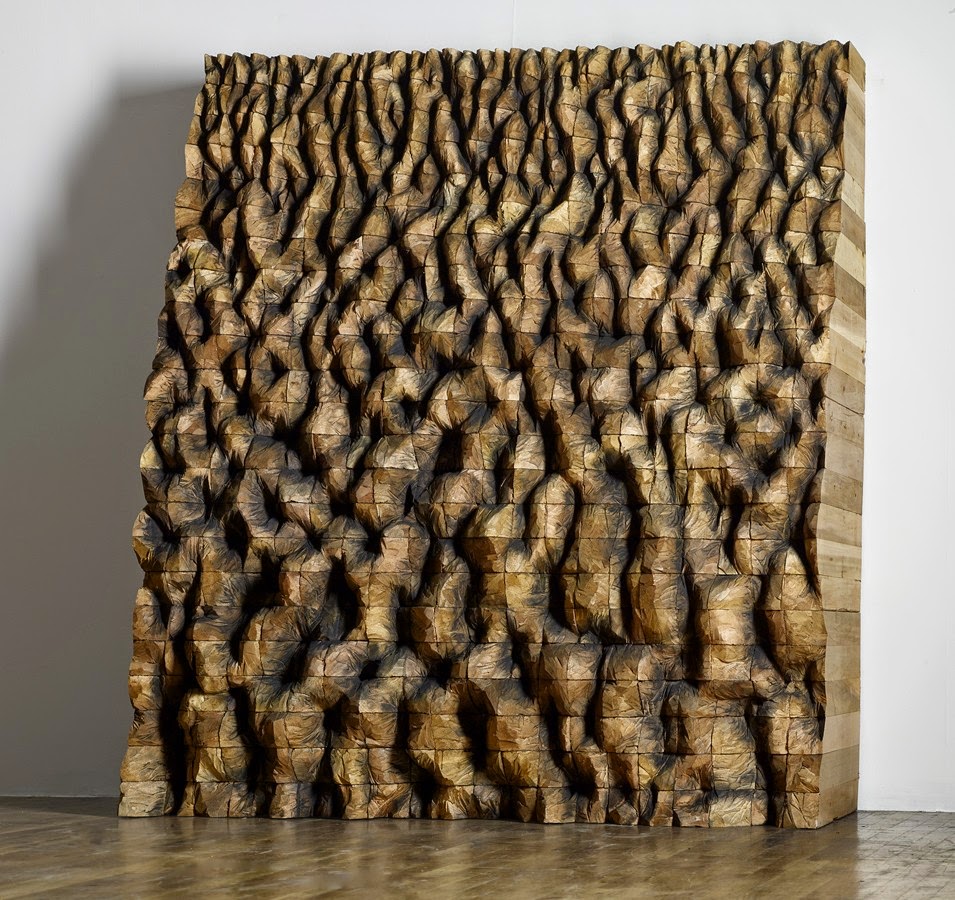 Ursula von Rydingsvard, at Galerie Lelong, uses the wood from cedar trees to create amazing abstract sculptures that seem to radiate the essence of the union between the processes of the sun and earth that is incorporated in wood. What’s so special about cedar? I’m not sure why, exactly, she uses cedar wood, but it is wood from an evergreen which seems to outlast other types of wood and which has built up resistance to insects and mold, thus secreting a wonderful, soothing smell due to the oils it has evolved for its own self-defense. It seems that the artist takes four by fours of cedar and a power saw to create contours at the ends of the four by fours, covers the contours in graphite to better bring out the inherent design within the wood, and then glues everything together to get the effect that she’s shooting for. 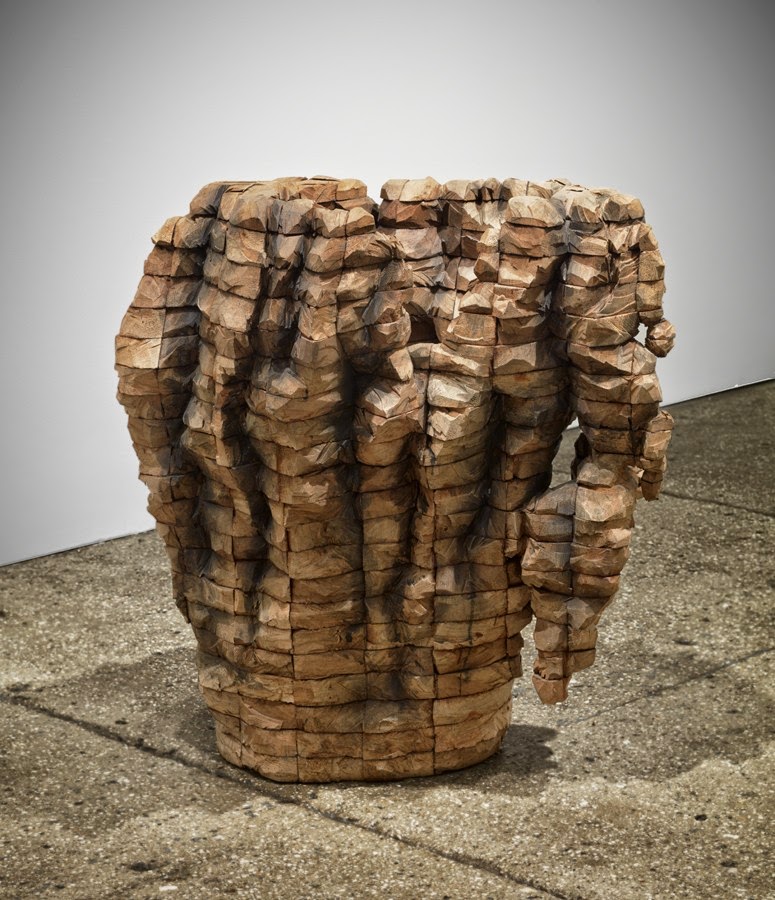 So she gets a kind of upward rising flame-like effect in the wood sculptures. That’s what I mean when I say she captures the union of sun and earth – this combination of solar and earthy energy sources is what creates the unique slow-burning “flame-like” vitality of trees.  Also, it’s as if by cutting into the cedar she is exposing the inner life of the wood, where all the significant growth and development processes occur. So her process involves creating structures that eschew the outer, protective layer of the wood and expose the most vulnerable part. The bark of the tree is merely protective in function and she exposes that part of the tree responsible for its capacity to ascend while sculpting this inner portion in a way that brings out the vitality and strength of the material. Her cedar structures are brick-like, yet creating a stone-like texture (especially with the graphite). So the odd but piercing effect the pieces have seems to be due to the fact that they look craggy and stone-like while being, of essence, a soft but durable type of wood. 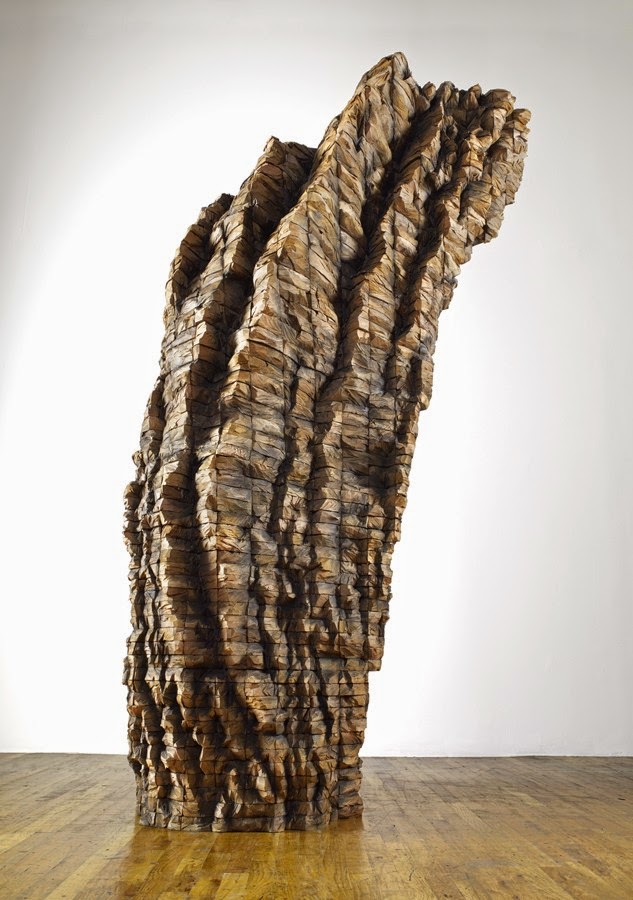 So we get a sense of calm ascendancy in these pieces. The bricks of cedar are not used to construct something useful, the bricks are involved in the creation of another type of ascending organic structure that would seem to result naturally from the nature of cedar once it is freed, as it were, from the imposed structure of the tree. 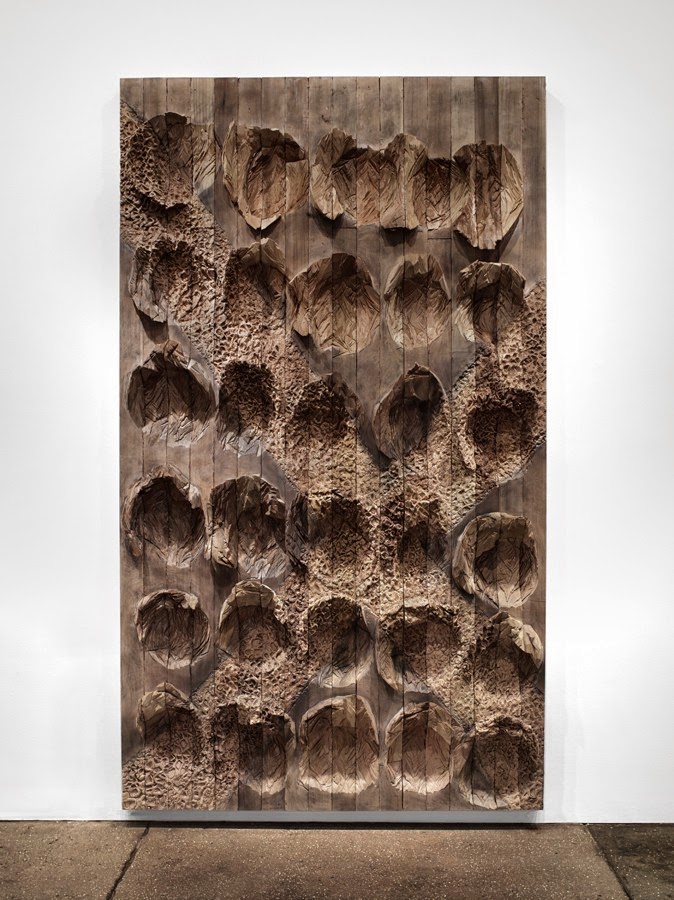 The show is up until the 13th of December and I would encourage you to drop by and experience these pieces directly.  For many years von Rydingsvard has been doing something unique with her cedar sculptures and the effect of the pieces needs to be experienced directly. The show also contains some work in bronze and some work on paper.