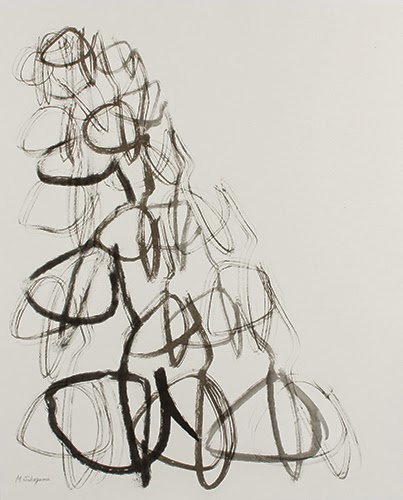 Sumi ink is made of a type of compressed soot derived from burning plant seed oils, which is then mixed with bone glue. It is still made according to a 2,000 year old process and it comes in a stick which can be mixed with water in order to dilute and lighten the ink on paper. As the ink ages, it takes on a richer look.

In a lot of Western ‘process’ or ‘action’ art, the darker the lines are in a piece, the more we can assume that the artist was in a more than usual passionate or aggressive state while making the piece. Mark Tobey, for instance, in the 50s, literally flung Sumi ink at paper, creating splashes of blackness that convey a sense of conflict, confrontation and aggression. However, since an artist using Sumi is able to continually add water to dilute the ink’s darkness, we can’t necessarily assume a state of being just from looking at the lines he/she makes. Sumi, therefore, is probably better suited to ‘represent’ and not necessarily to ‘express’. 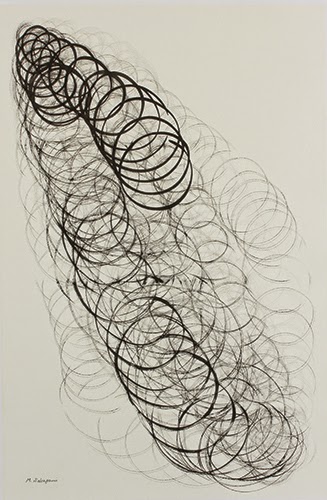 What I liked about Masumi Sakagami’s sumi pieces at Walter Wickiser Gallery was the way she, nevertheless, gets an expressive look and feel by overtly experimenting with how dark and how light she can get her lines. In SUN SUN II we literally see hollow lines to the right of the piece. Density and hollowness become binary extremes or parameters for the rest of the action going on in this work. It gives a type of pulsing effect to the piece, of controlled appearance and disappearance happening within an overarching inner process which is being visually depicted.

Taki looked a bit to me like Tatlin’s Monument to the Third International done in a calligraphic style. Indeed, the shape of the image seems to be like a right triangle with the hypotenuse made completely of hollow twisting and turning lines. In fact, by turning the image over in the booklet that comes with the show, I realized that if you treat this figure as a right triangle, and turn the image so that the hypotenuse runs from the lower left corner to the upper right corner of the page, you see the lines becoming more hollow as they approach the line of the hypotenuse. Or, if you just keep the image positioned as it is presented, you see a movement from density to lightness from left to right. The right triangle, in the esoteric tradition, represents the creation of new life or a new being – the adjacent line on which the right triangle lies is considered masculine, the opposite side (created through the 90 degree angle) becomes the feminine and the hypotenuse is the new being (after all, ‘c’ squared equals ‘a’ squared plus ‘b’ squared). Is Sakagami playing with the triangular form here deliberately? 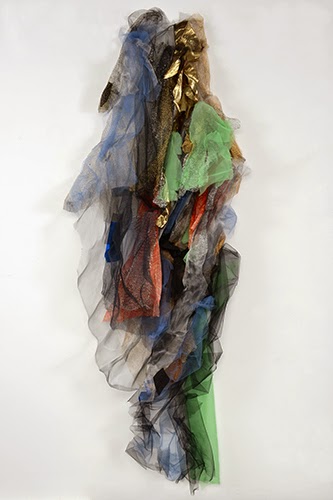 There are also some amazing fabric collages by Renée Lerner in the show.  Call me a film buff but looking at these complex combinations of fabrics and colors made me think of the Katherine Hepburn character in the film version of Jean Giradoux’s play The Madwoman of Chaillot. I’m pretty sure the eccentric Countess Aurelia’s closet looked a bit like some of the wonderful pieces in Lerner’s portion of the show. 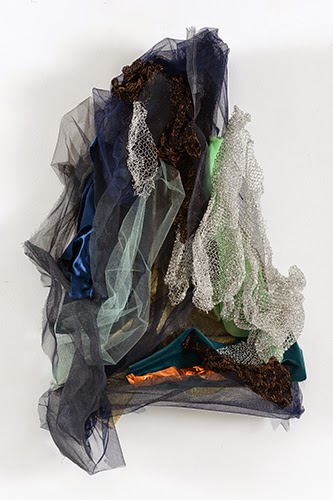 For me, and you can drop by and judge for yourself, these fabric collages were laden with political meaning. Looking at elegant and expensive types of fabric among wire mesh made me think that this is the type of fabric donned by those who can, through money and power, render themselves beyond reproach. Clothing attracts but it also can intimidate.  Clothing for the well-heeled is more of a delicate armor than anything else. Although the artist was influenced by abstract painters of the mid-20th century, and previous press describes her work as ‘painting with fabric’, I don’t think clothing can be easily separated from the social or political. Seeing the differing types of posh fabrics draped so beautifully with wire mesh made me think of these pieces as a type of protective talisman, where the possessor might be able to absorb some of the power and protection such material often provides the wearer. If, however, you are not as political a creature as I am, you can also just give yourself over to the various emotional effects provoked by the creative blending of the fabrics, found objects and colors. 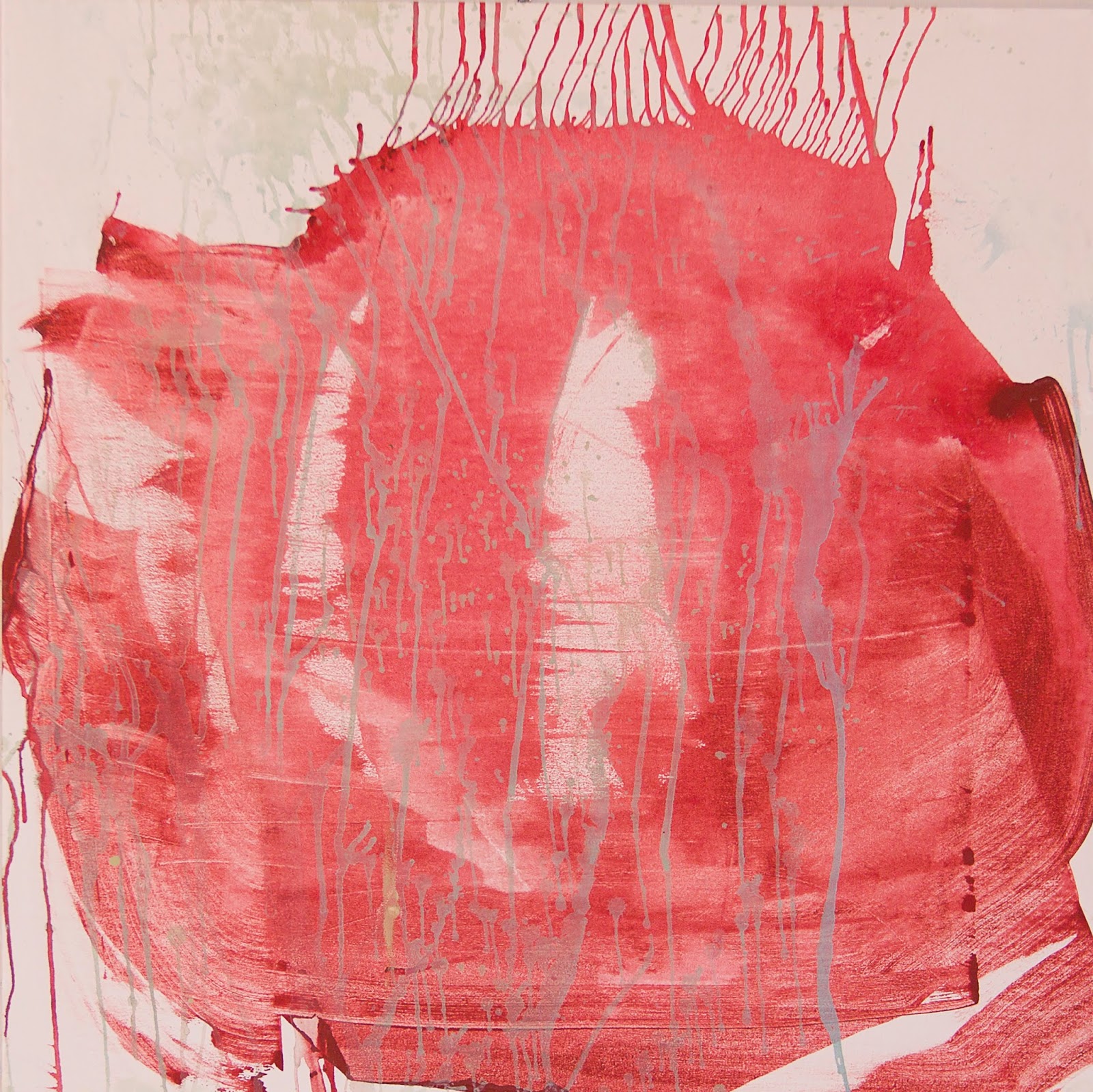 Judith Shah’s current work at Wickiser seems to derive from a deep trust in her own intuition when she creates non-objective pieces. In her artist’s statement she writes that she is currently taking cues from both the Abstract Expressionists and Color Field artists.  In her painting “Red Head” I like how she has delicate little tendrils both reaching upward and spreading downward at the same time. Like the Color Field artists she maintains the two-dimensional basis of the painting while conveying a deep sense of a process involving the establishing of roots with the reaching upward toward a connection to something higher. The giant blob of red becomes like an organic bridge between the animal and spiritual.