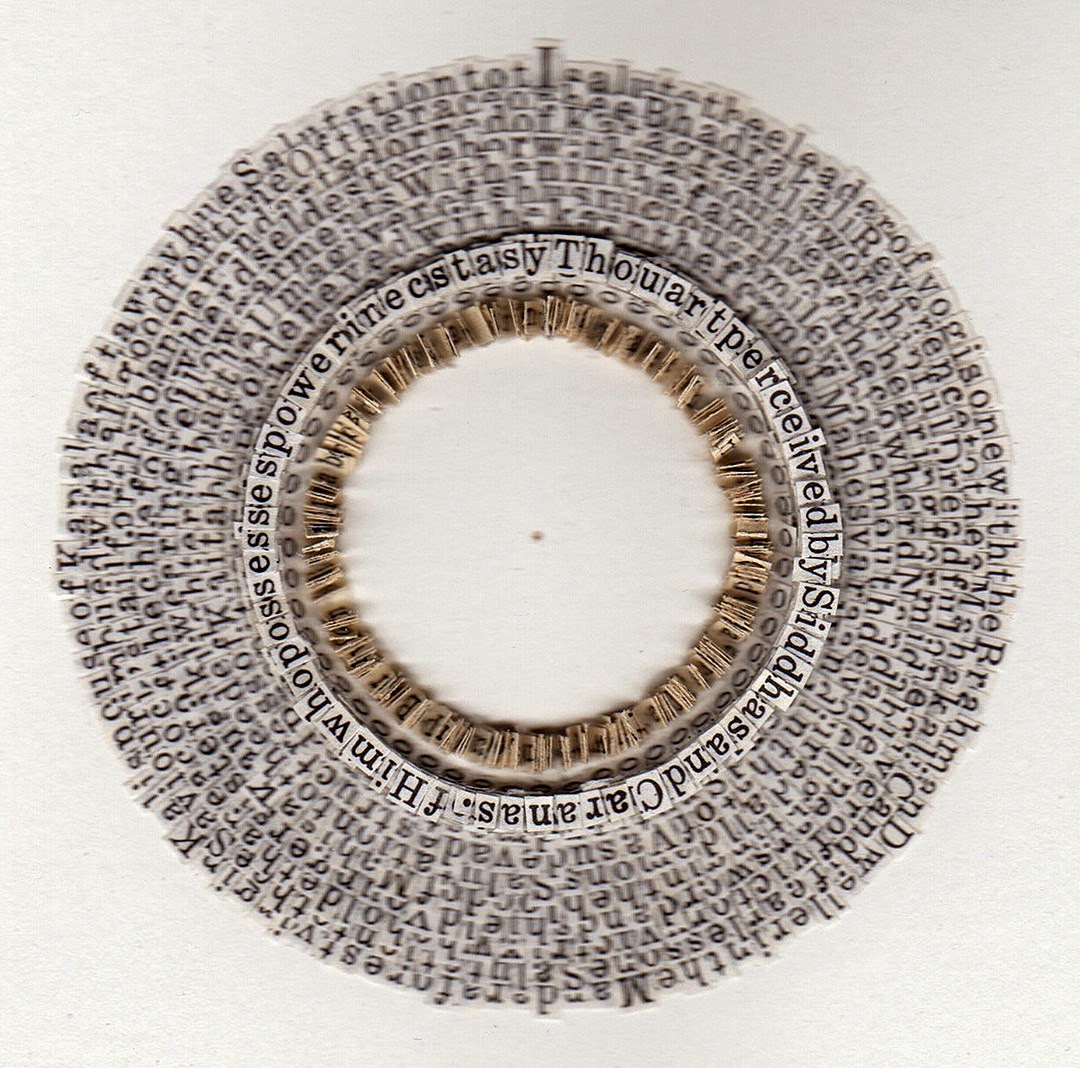 My maternal grandmother (a truly saintly person) had immigrated to the USA from the old country and was a quietly devout Catholic. When I was a kid and used to stay overnight, I always slept in a room that had a portrait of the face of Jesus, with his crown of thorns, as he was dying on the cross (so at her place I was never afraid of a vampire climbing through my window).  I could see, however, that the entire portrait was comprised of very small words, some darker and some lighter.  So it turned out that there was a guy from the old country in the neighborhood who took the entire text of the Gospel According to John and reconfigured the form of the text and lightened and darkened the words to create different scenes from the “Passion” (death process) of Jesus – all incredibly mawkish and gruesome. That the guy would do something so labor intensive as this gave, to the elderly ethnic Catholic ladies around me, the sense that this was especially holy stuff to hang in their spare bedrooms. It wasn’t just a drawing of a dying Jesus, it was a drawing of words meticulously and perfectly arranged. 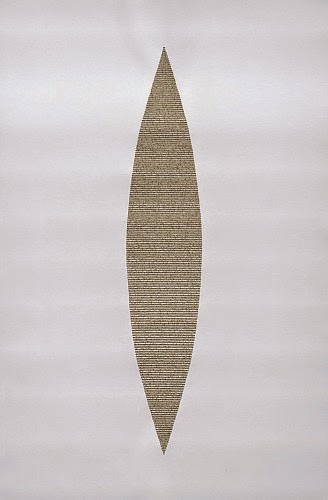 Meg Hitchcock (along with the entire staff of Margaret Thatcher Projects) is probably going to hunt me down and beat me up for even remotely mentioning her work in the same breath as a kitschy dying Jesus made of words, but I think we have a rarified and distilled and more thought-provoking version of this concept of reformatting words in the current show at Thatcher.  While I was packed in the gallery during the opening, looking at a vertically arranged, almond or boat shaped figure (a vesica piscis?) on the wall, it hit me that the figure was comprised of teeny tiny little letters. As I focused on the letters, slowly but surely I began to make out the fact that the letters comprised the beautiful Christian spiritual “Michael Row the Boat Ashore”. 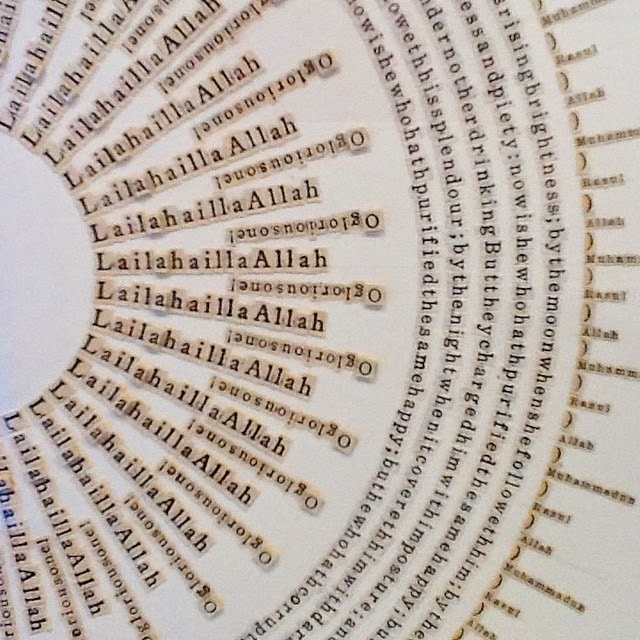 So Hitchcock takes pieces of sacred or religious texts from one holy book/source and cuts out individual letters to recreate pieces of text from another holy book/source, but in more meaningful shapes. So I’m guessing there are two parts involved in grasping why she does this. First, perhaps, from her perspective, she realizes that when we read a sacred text we are often only moved or changed by specific quotes, lines, anecdotes or metaphors. The whole text is given meaning by these little meaningful snippets within larger fluffier material.

But what gives power to these little meaningful snippets? Each word in conjunction with others which suddenly evokes something in us as we engage in the linear reading process.  And what gives power to each word? Each letter…so she seems to treat each letter of the English alphabet the way the ancient Nordic folks treated their sacred Runic alphabet – each letter possessed power and meaning and when combined with other Runes presented something more than words: a capacity for engagement that could lead to spiritual transformation (Odin sacrificed an eye and hanged for 9 days from a tree to get the Runes). Hitchcock makes you focus on what exactly gives language the capacity to engage – where is this power ultimately stored: in the letters? words? combinations of words? How is such meaningful communication possible? What separates the text of the Bhagavad Gita from the New York Post? The same letters and sentence structures are used in both. So then part two is when the viewer him/herself pieces together and is impacted by the meaning of these ‘runes’. For instance, I especially liked going through the effort to read, in one piece, the little phrase “…Him who possesses the power in ecstasy…” For Hitchcock these sacred snippets require new forms that require extra effort from the viewer. 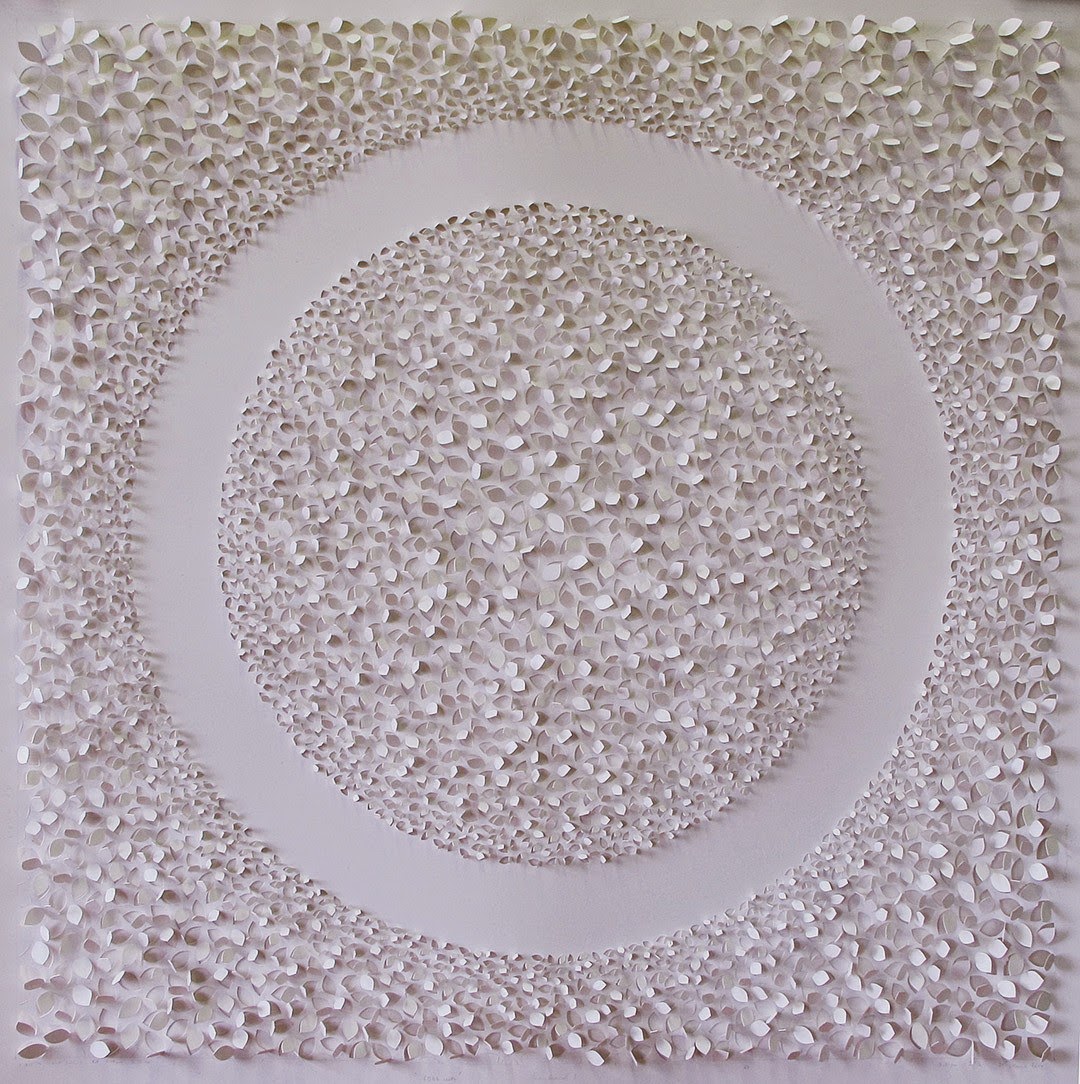 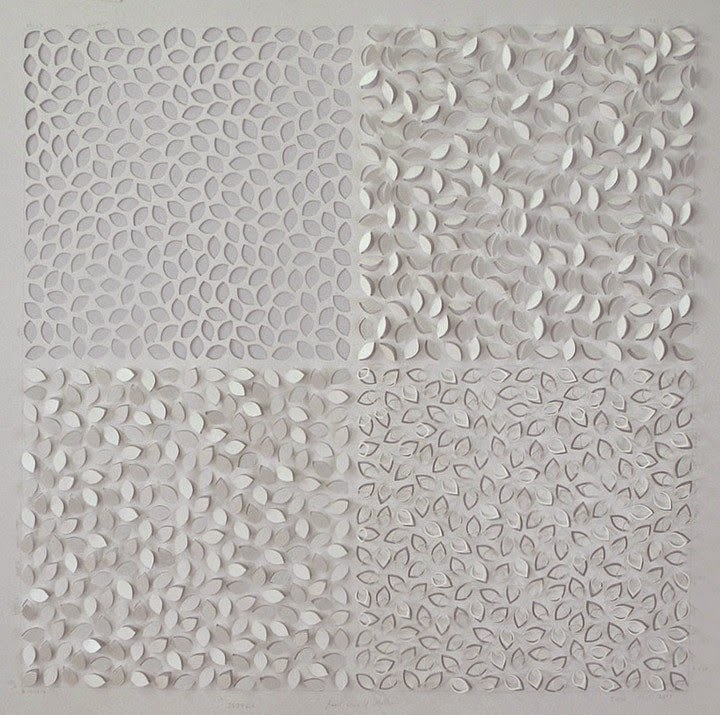 Jaq Belcher starts with just a simple sheet of white paper and from the medium of the paper itself thinks of the possibilities of conveying something meaningful. Instead of adding to the paper, she finds ways to take something from the paper to express various concepts or evoke a certain awareness or sense of something normally ineffable. If I am not wrong, she seems to often slice out what is called the vesica piscis (also mentioned above). You get this shape from two circles with the same radius intersecting so that the center of each circle touches the perimeter of each circle. 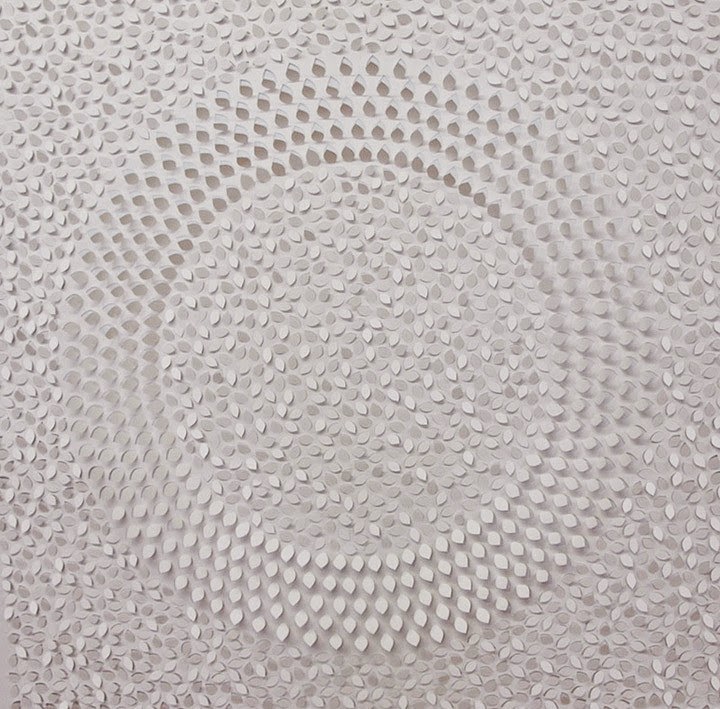 This is a very ancient symbol that goes as far back as Egypt, and maybe farther. Some folks say this is a stylized vagina – the vagina representing the fulfilment of spiritual desire symbolically represented by the penis. She carves out these vesica piscis shapes through a repetitive process which demonstrates a sense of supreme equanimity. She is capable of performing the same action producing the same effect over and over again, like continually shooting an arrow into a target’s bulls-eye.  If she is cutting vesica piscis shapes, we get designs based on these scared symbols of fulfillment where the shapes alternate with empty space, the empty space, paradoxically, perhaps, more directly representing the concept of calm and peace than the symbols. 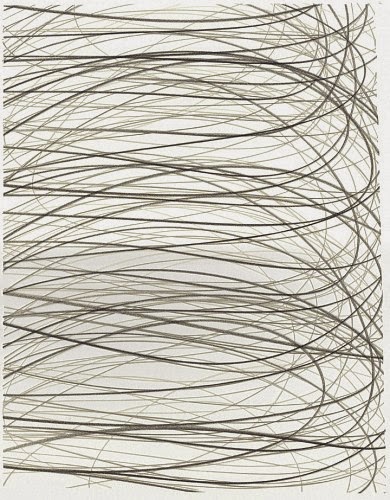 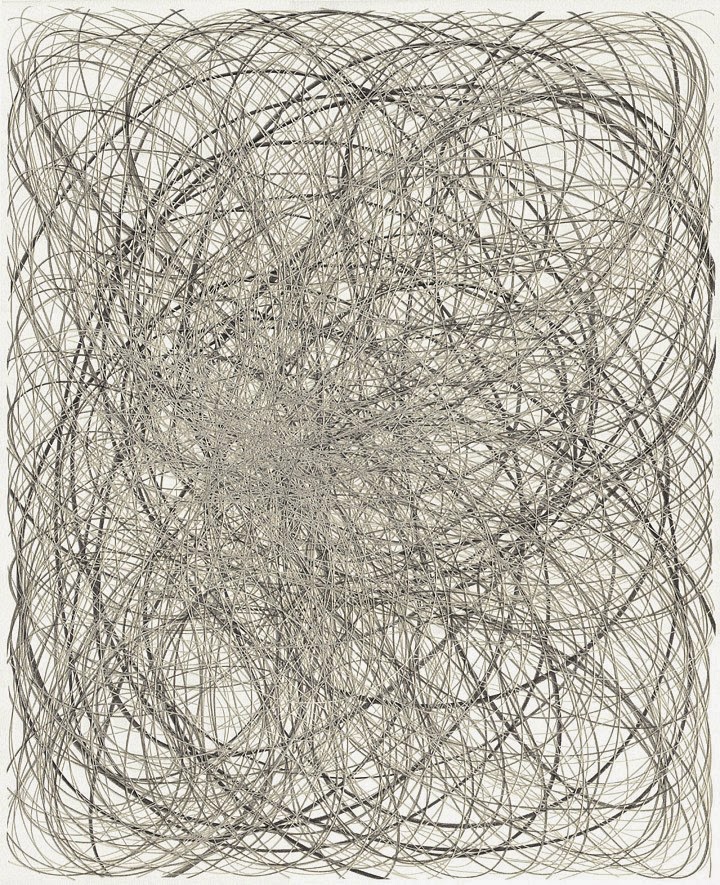 Adam Fowler creates layers of swirling lines, in two steps, using materials he knows the viewer will be familiar with – a graphite pencil and sheets of paper. First Fowler creates his drawings and then using an exacto knife, he slices and layers what he has drawn. The swirling lines, for me, represent cognition or inner processes that are occurring or have occurred but which cannot, perhaps, be stored into memory and later expressed. 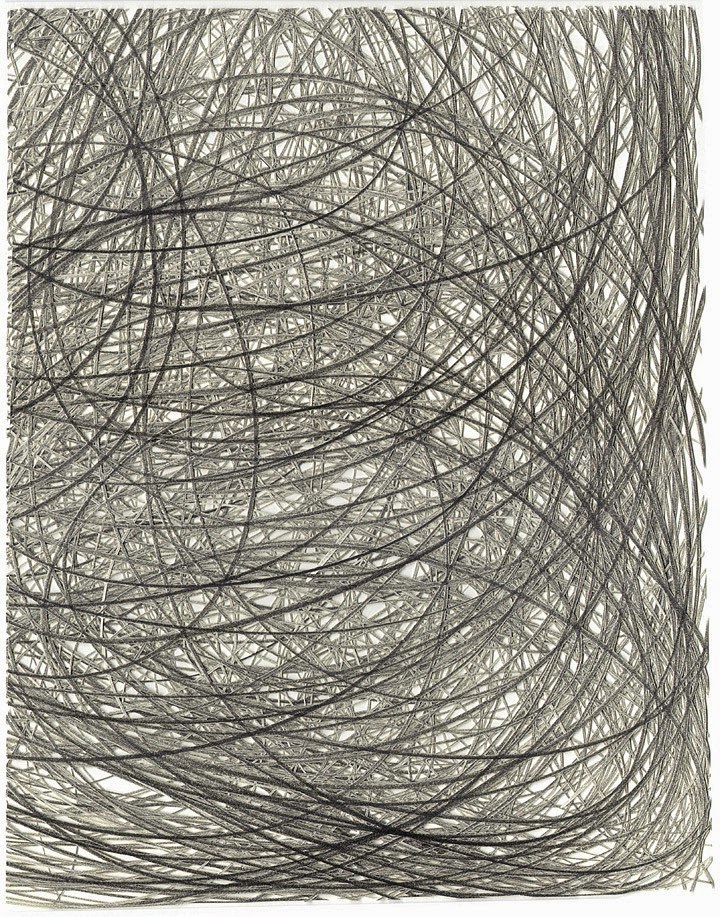 The swirls or curly cues are a type of nervous energy, perhaps, that comes from inner engagement and the attempt to understand ourselves. We are thinking, struggling, aspiring, searching for ways to overcome obstacles and this work really seems to me to show the inexpressible internal effort we put forth in our attempt to become more humane. The swirls reminded me of P-300 waves. P-300 waves are waves that the brain produces when we have meaningful insights, or solve difficult problems - these swirls don’t look like P-300 waves but they are like P-300 waves to me.  I think Fowler’s work, to me at least, is what inner development looks like from the outside. If you have to represent the deep dive inward and what happens next, you get these layers of swirling, curving lines. 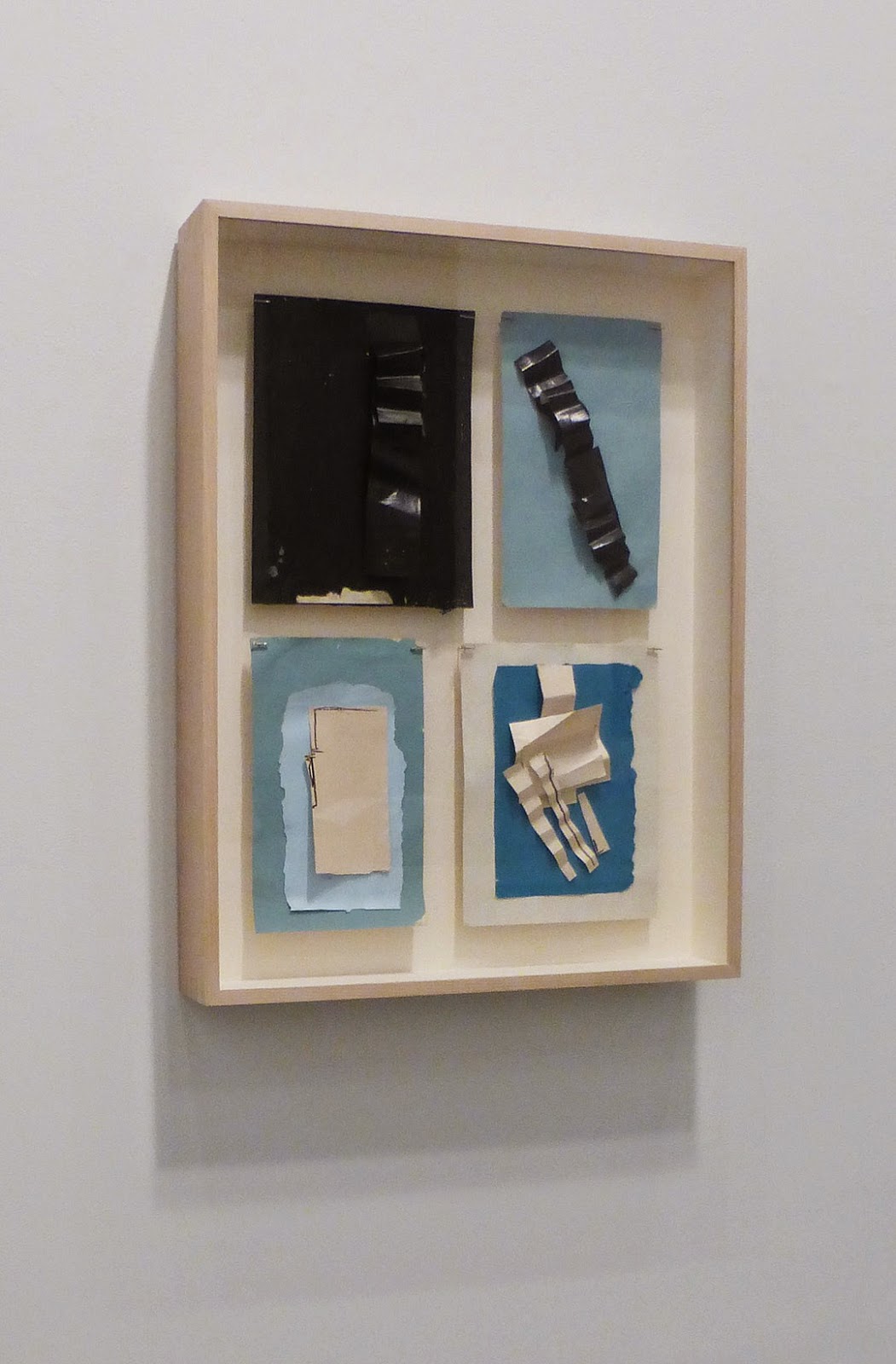 From what I have been able to tell, Nan Swid takes antique books and old ledger books, covers them with encaustic or paint, and places these materials within a square or rectangular pattern. By covering the books with encaustic she is, of course, rendering them useless.  The implication for me is that the encaustic covering represents a realization or insight that the type of engagement to be derived from text may be insufficient compared to another self-generated and more organic and creative inner process. She seems to be pointing at the limitation of textual engagement and pointing toward something more necessary.  It’s as if the books have been read, the accounts have been tabulated and now they are permanently sealed.  The person cannot and does not want to go back to the text, which has pushed the person away from text into a deeper form of engagement. 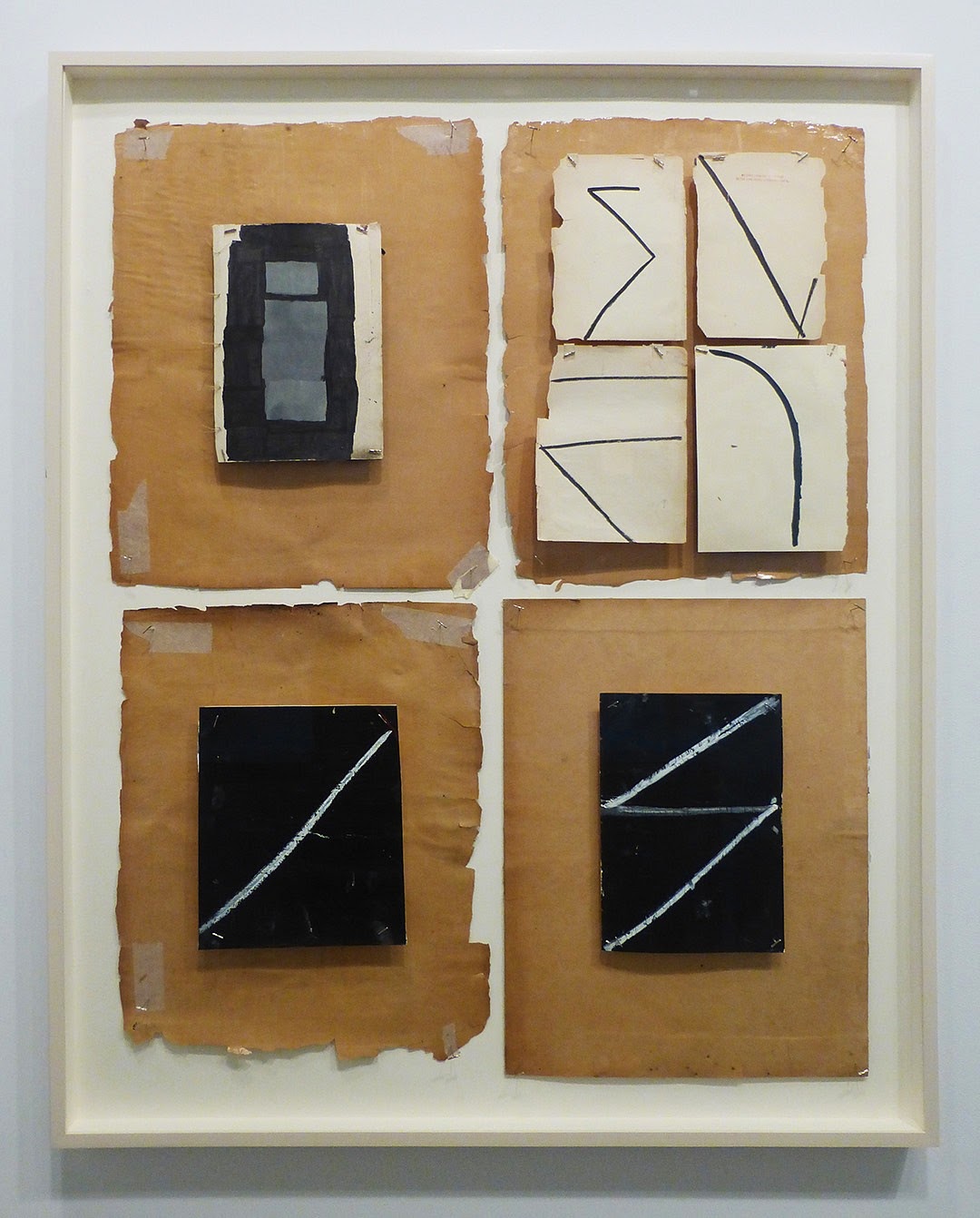