The Ambiguity of the Erect Penis: Nicolas Gaugnini at Bortolami 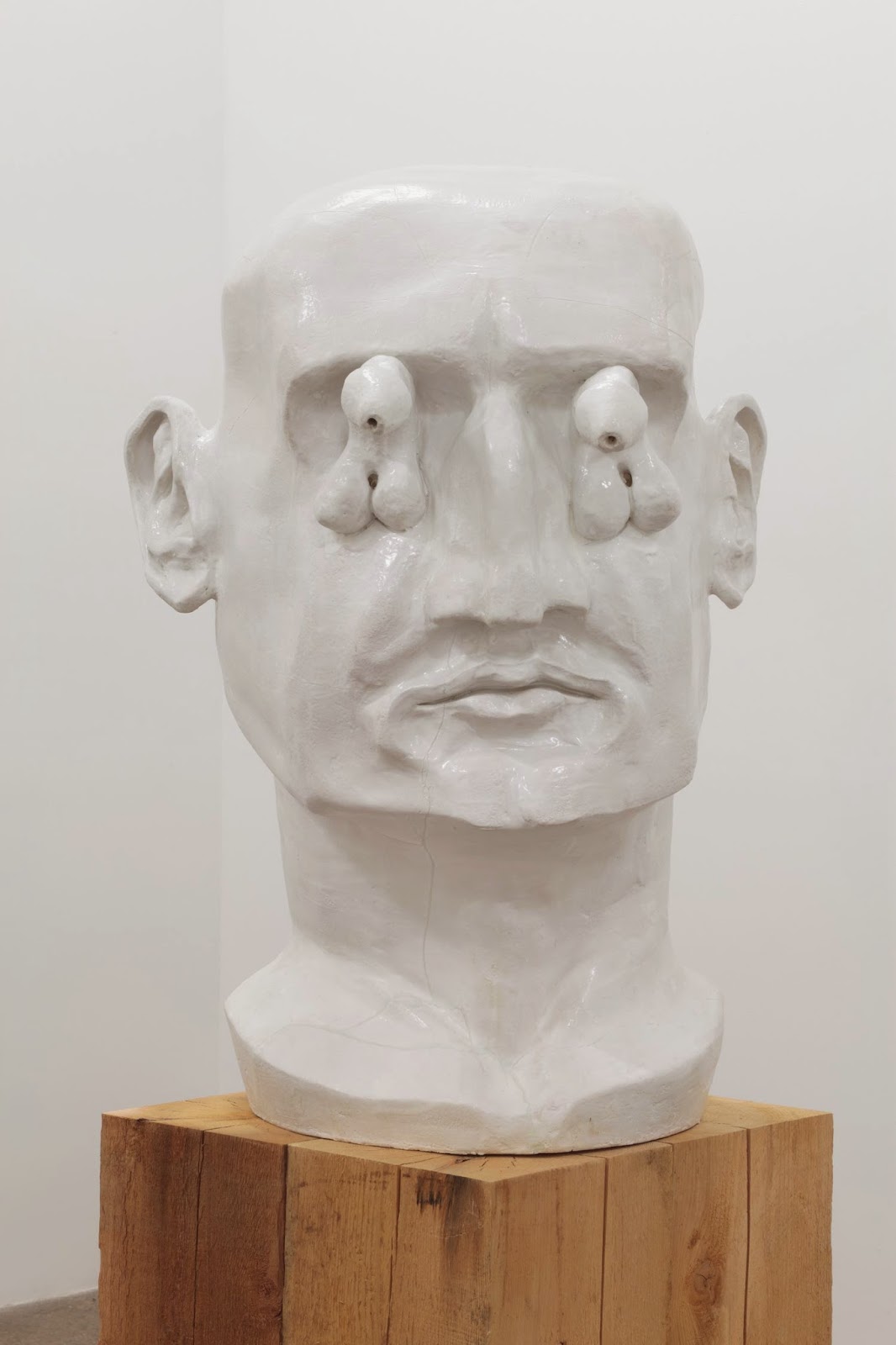 The erect human penis, in the history of art, religion and culture, once used to be of paramount significance. One of the earliest discovered painted representations of a human figure was, in fact, in a Lascaux cave, dating back thousands of years, where a human figure with the head of a bird stands with an erect penis while apparently being killed by a bison with its entrails spilling out. As James Frazer explained in his amazing work The Golden Bough, in ancient agricultural societies the erect penis was a fertility symbol and representations of the penis had magical functions to help ensure the fertility of the land. In ancient Greece and Rome erect penises abounded. 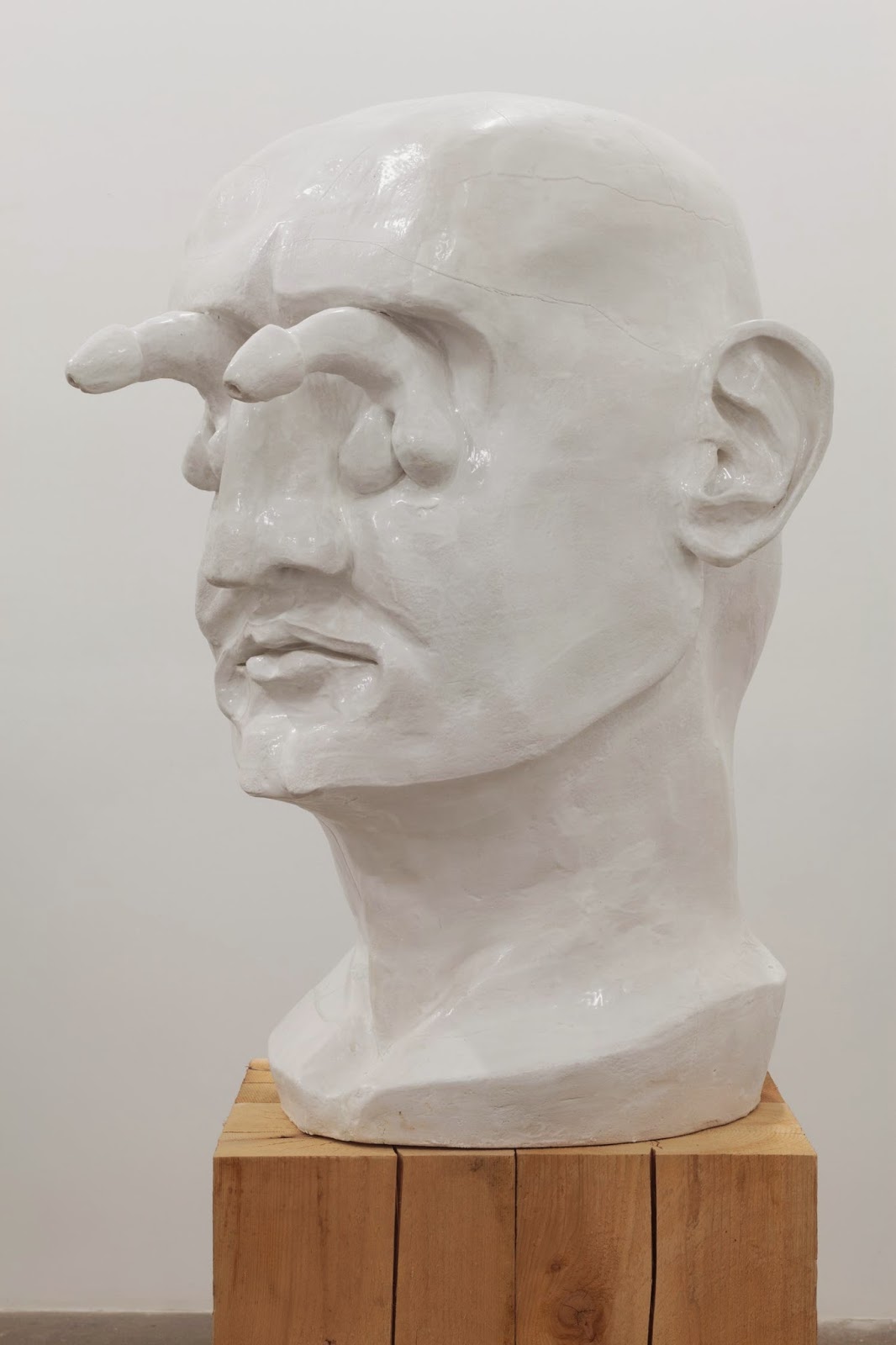 In Nicolás Guagnini’s wonderfully penis laden show at Bortolami, though, we have to ask the question: What is the erect penis now as a raw symbol in a secular age devoid of both shamans and a belief in fertility magic? Actually, Guagnini puts the penis within the perspective of contemporary economics as he, among other things, asserts that Freud’s little boys who feared castration have evolved into the ‘spectacular patriarchy of late capitalism.’ In fact, Yanzhen, a friend of mine who is getting her PhD in business, had an interesting take on Guagnini’s use of the erect penis.  Her take was that the penis aids in the construction of male selfhood and arouses thoughts and desires for private property. Private property and the allocation of wealth is also passed on along one’s bloodline creating inequality. Allocation after production is based on maximizing the interests of one's own interest group, which is usually one's bloodline. This becomes the foundation of an economy, social structure and political system. 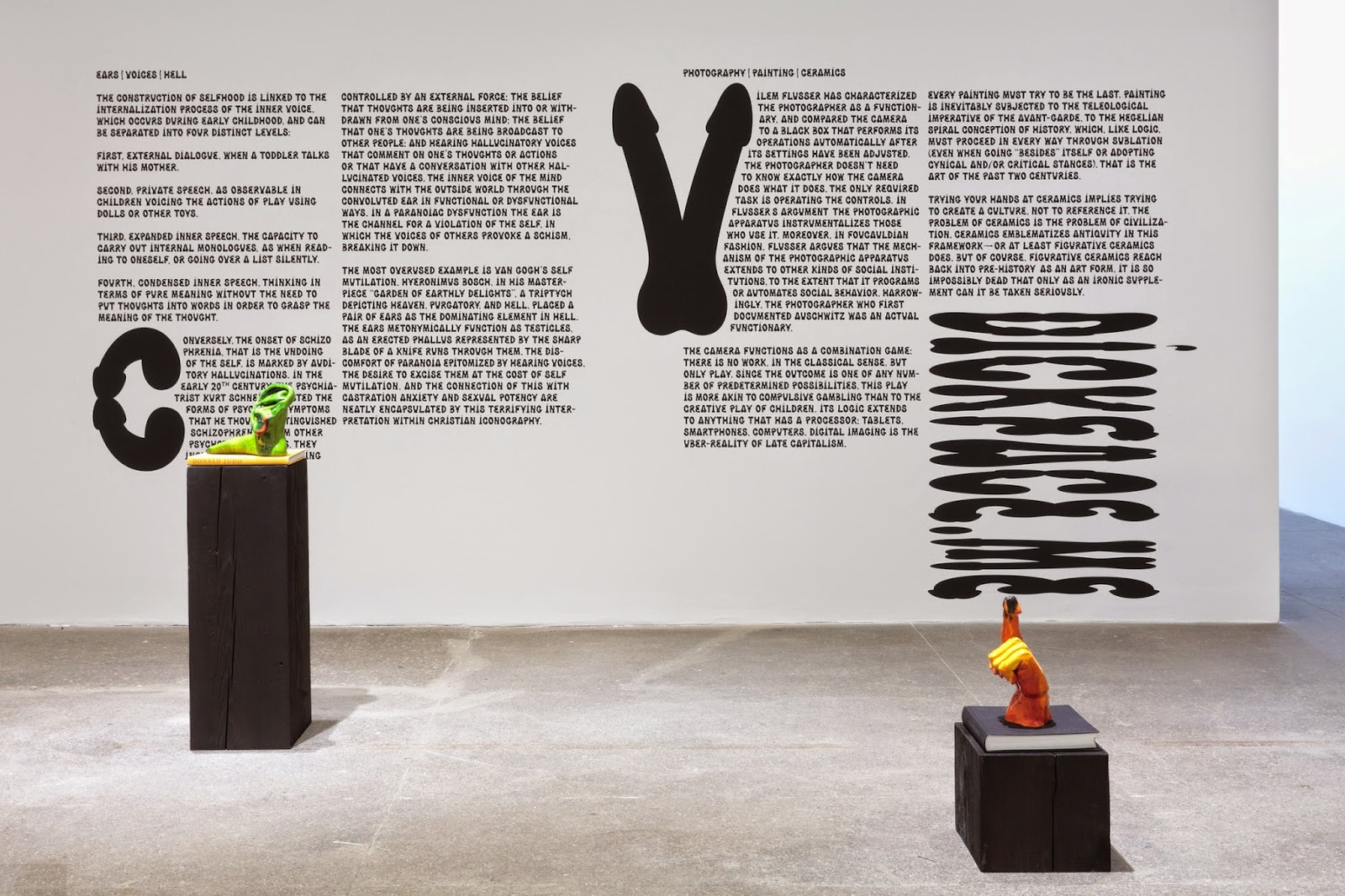 In allegorical literature or art the sexual union of male and female always seemed to represent the union of desire and spiritual fulfillment. So I am assuming an erect penis can more closely represent this concept of desire. An erection for a guy is both pleasant and painful – the element of pain goads the guy forward to seek a sexual partner.  Sexual gratification is one measure of the seeking of pleasure and another measure of the elimination of a painful goading. The desire for sexual gratification, in fact, seems to perfectly mirror, metaphorically, the desire for spiritual communion. The person who seeks perfection is goaded forward by the pain of imperfection. Guagnini seems interested in, however, how “Capital is desire. This condition has reduced our form of life into biopolitical submission.”  In late capitalism basic needs are not met in wide swaths of the world, wealth is not created for the benefit of an entire society and desire is produced in the consumer as a way of creating extraneous, wasteful need which triggers increases in income gaps. 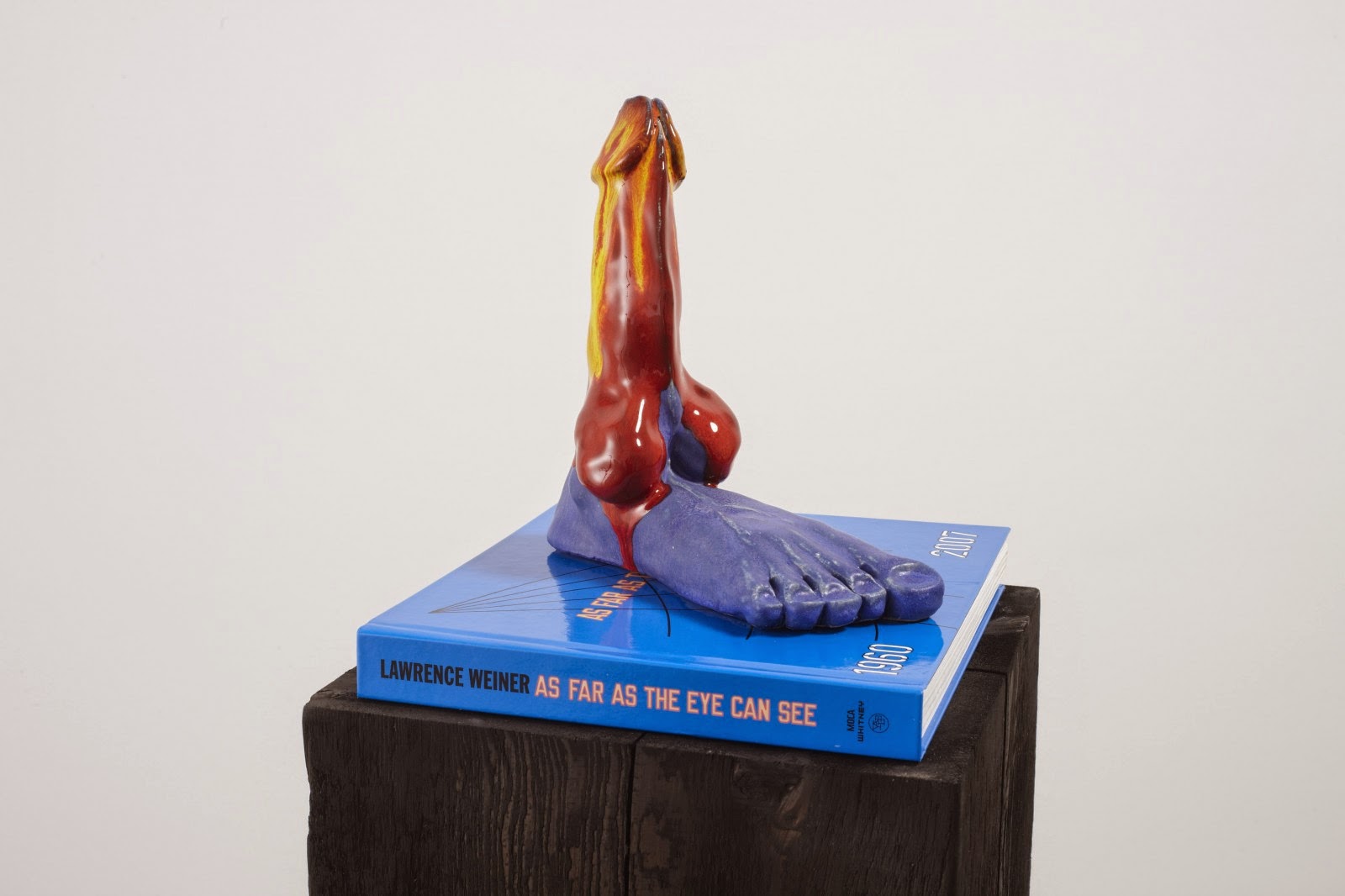 So what about these giant heads with penises coming out of the eye sockets? So these figures’ eyes have been literally replaced by penises. Does this mean the figures have abandoned themselves to a pursuit of pure late capitalist desire?  Has the penis evolved from fertility object to an object representing commodity fetishism and hoarding? These figures have literally become their desire? Or have these figures dived deep into themselves to further investigate and question the desire that goads them forward? Instead of pupils to capture and process light, we see the urethral openings of the penises ready to ejaculate. 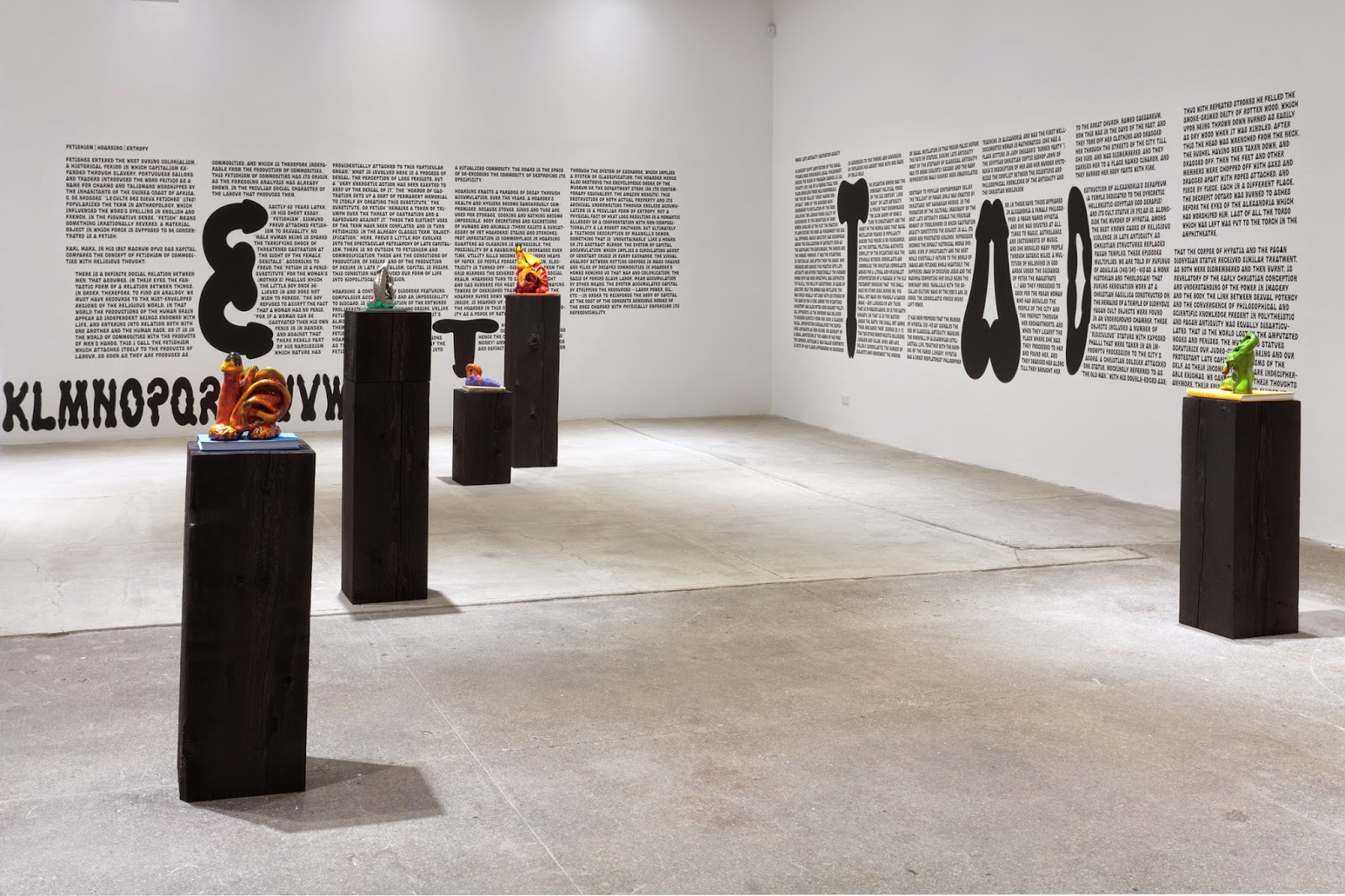 These heads are not the only feature of this show, however.  Accompanying the show is a large free publication, designed by Bill Hayden, titled: Some Notes on Dickface by Nic (the quotes above were taken from this publication). Dickface is a new type of font (which you can see at dickface.me) in which the letters are made from images of penises.  While reading through the publication sometimes you can just focus on the text to get the meaning of what Guagnini is writing, while at other times you realize suddenly you are reading a text comprised of penises. You periodically shift from deriving meaning to seeing penises. Perhaps this means that the artist, himself, is engaging in a capitalist endeavor. He is, basically, selling these radical ideas. To a great extent art has become the commodification of radical ideas concerning individual and societal development. 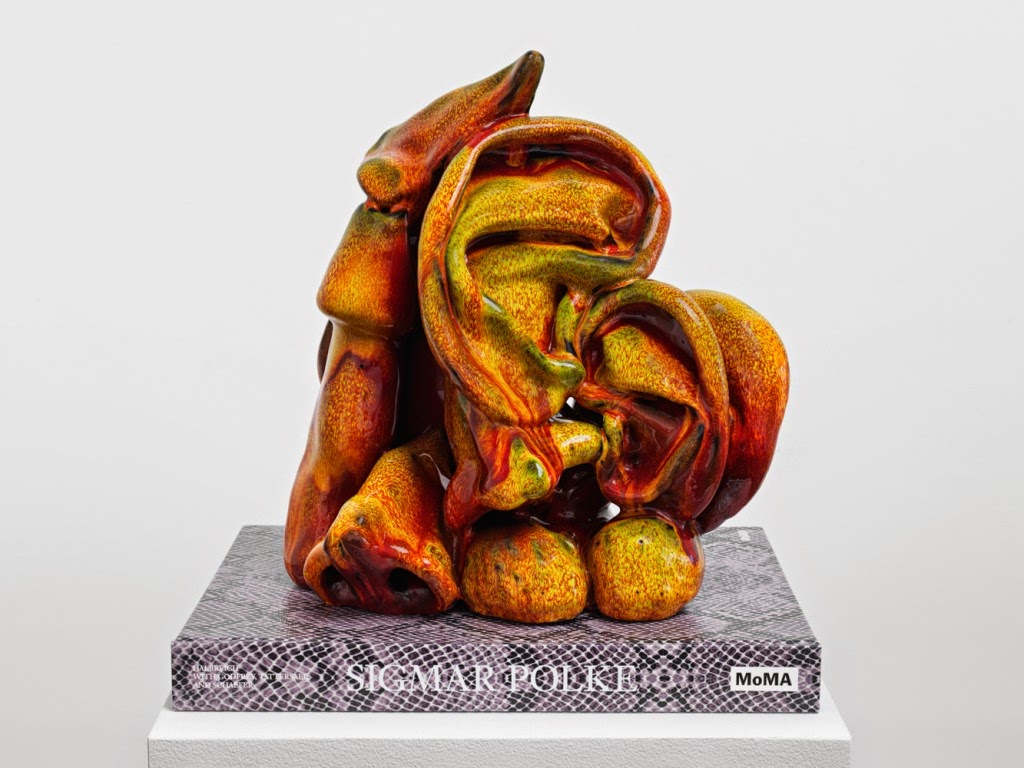 The text deals with ethical  issues concerning capturing carnage and human suffering on film, the effects on a viewer of witnessing the horrors of mass death through photography, fetishism – in anthropological and sexual terms (as well as Freud’s belief that all men fear castration),  hoarding as a psychological manifestation of late capitalist waste, amputation of noses as an ancient punishment, Christian iconoclasts, the death of classical antiquity, identity formation, auditory hallucinations and Bosch’s use of two ears and a knife, in his Garden of Earthly Delights, as hidden phallic symbolism (among other topics). The publication is free and in a limited edition of 1,000. Images of various types of carnage are often comingled with fashion photography into which some of the artist’s ceramic sculptures have been superimposed. 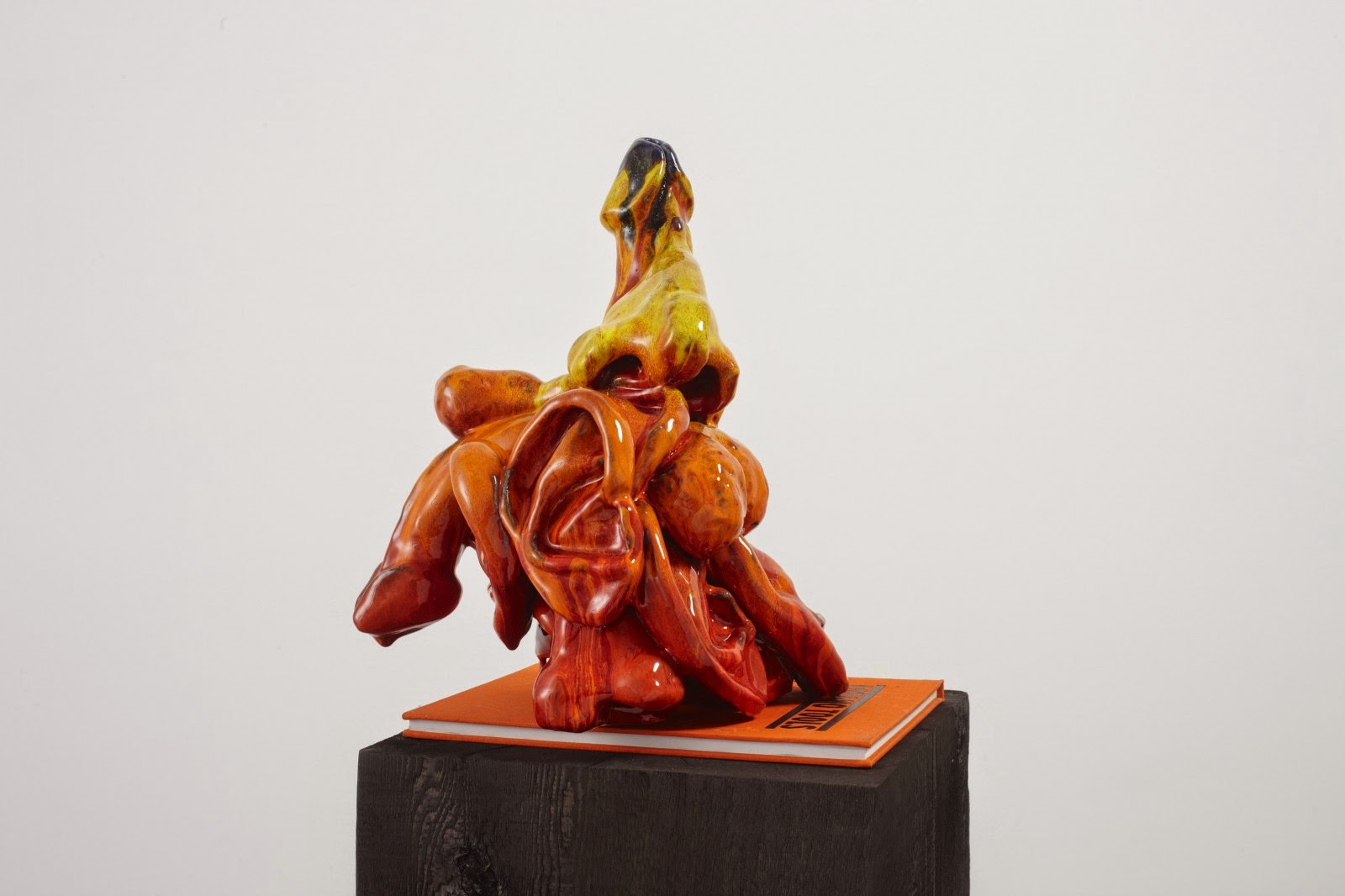 Reading the publication may help elucidate the meaning of the 12 ceramic figures which are amalgams of feet, hands, ears, noses and penises.  One of the first images seen in Guagnini’s publication is an image of many severed feet and legs piled on top of each other (perhaps from an American Civil War field hospital where amputations occurred). As mentioned above, he also deals with themes of castration, severing of noses and ears etc. Many of these amalgams of body parts are set on top of closed art or art theory books.

Feet represent movement, hands represent action, the nose and ears perception and the penis desire. So what does it mean to combine these body parts together and place them on art books? To me, when I first saw the show, these severed and recombined body parts represented kind of organic Duchamp-like ‘assisted readymades.’  Guagnini could be saying that these combinations of the features of these body parts are the common denominators of everything written in the books or that these severed and recombined parts are a common hindrance to really grasping what might be offered in the books. There’s definitely an interesting contrast between the amalgams of ceramic body parts and the books they rest on and you can get your own intuitive feeling as for what’s going on by dropping by and experiencing the show.

As a postscript - I am now wondering whether the severed hands, feet, noses, ears and penises are meant as a type of anti-art statement. Maybe the artist is saying that when we approach art, we can only approach it from a purely visual perspective. Overall experience is multi-sensory and requires movement and action and various senses. Art engages us on a limited basis, whereas transformative experience engages us multidimensionally.