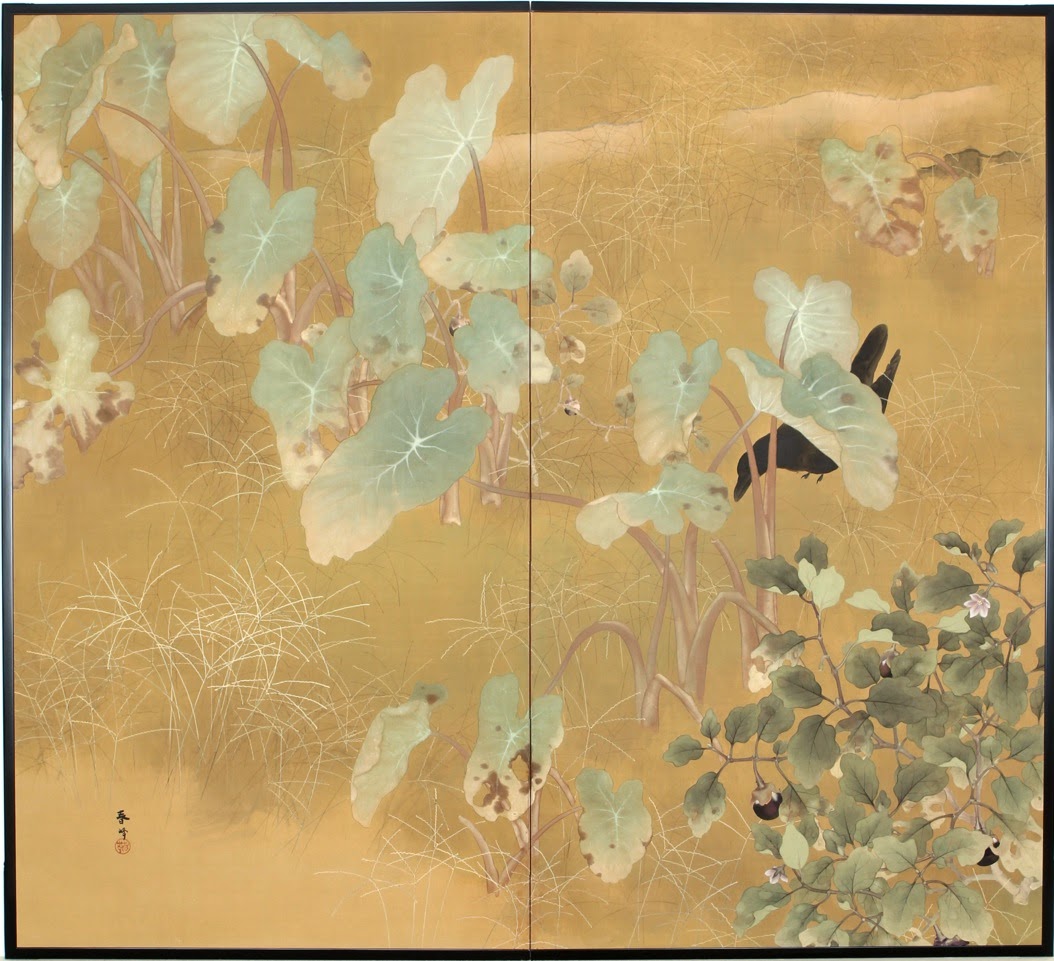 The Erik Thomsen Gallery specializes in Japanese screens and scrolls. Thomsen, himself, was born to Danish parents in Japan, speaks the language fluently, and was the first foreigner to be apprenticed to an art dealer in that country. For Asia Week this gallery focuses on some amazing Taishō and early Shōwa era screens and scrolls.

The Taishō and Shōwa eras cover the reigns of two Japanese Emperors, Taishō (1912 – 1926) and Hirohito, whose reign was the longest of any Japanese Emperor, stretching from 1926 to 1989. The transition from Taishō to Shōwa is often characterized as a transition from an era of liberalism and democratic reforms to one of ultra-nationalistic militarism, leading to Japan’s horrific defeat in WWII and its remarkable resurrection as a world economic power. 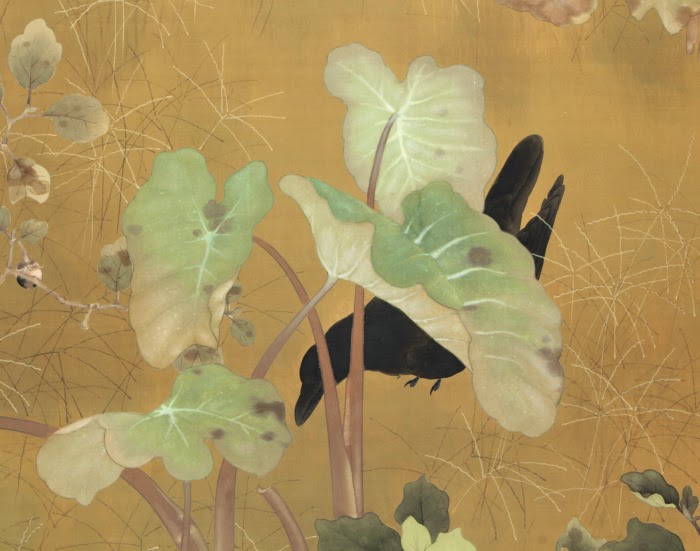 The piece I’d like to focus on in this review was by Abe Shunpo, and it was created in the early Shōwa era.  Among taro leaves, plume grass and eggplants, we see a crow lurking. The crow is actually considered a type of messenger from the gods in Shintoism but it has also served as a trickster figure in various world mythologies due to its reputation as one of the more conniving and opportunistic of animals. Indeed, crows have been discovered to have remarkable problem solving abilities. In Japan (where the crows are much larger and more aggressive than in America) some city crows will drop hard-to-break nuts into traffic so that cars can roll over the shells, breaking them and allowing the crow to eat the now accessible food. 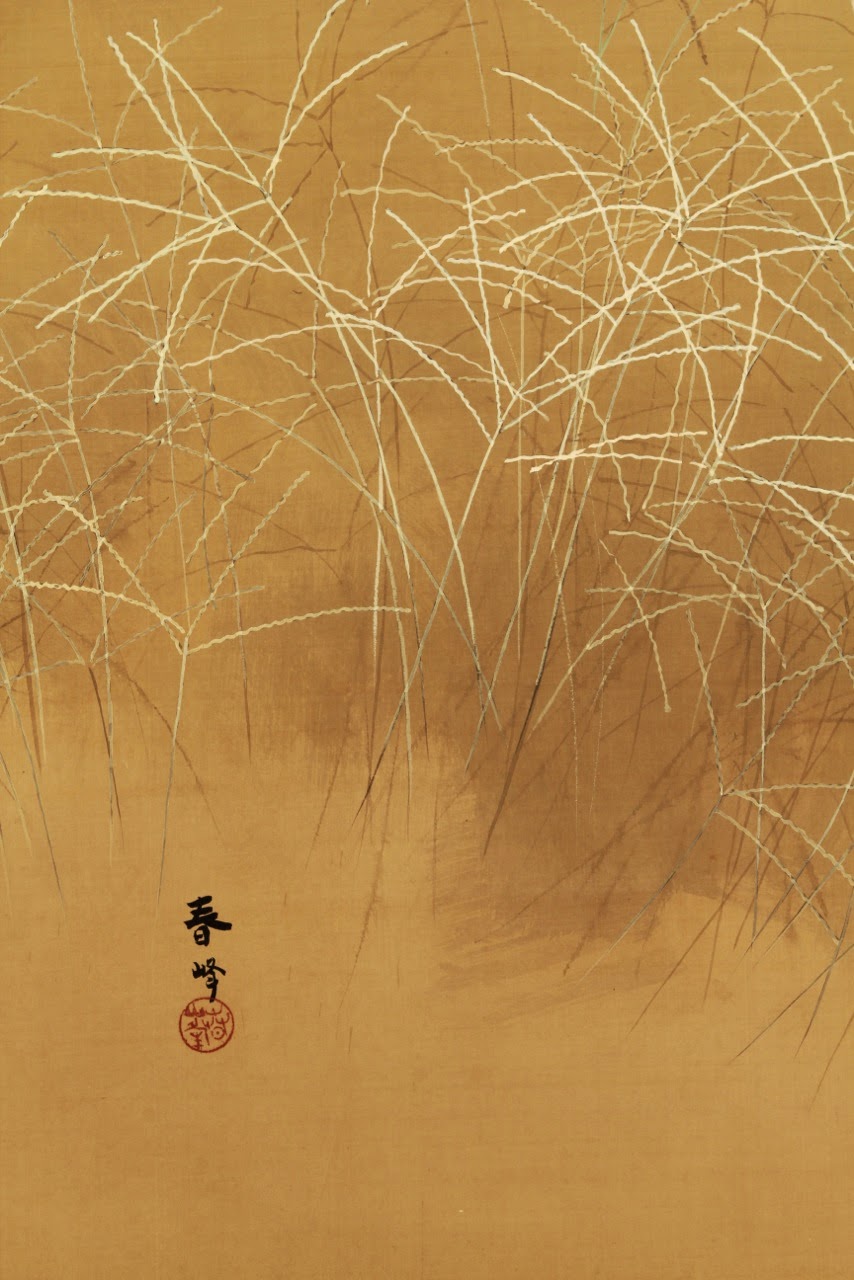 The crow in this piece is starkly contrasted with the placid flora around it – it is almost a literal black mark on the nature surrounding it. Does it represent that capacity evolved from nature which signals a possible divorce and alienation from nature? Could the raven represent our own capacity to divorce ourselves from the natural world through our own forms of connivance and deception? 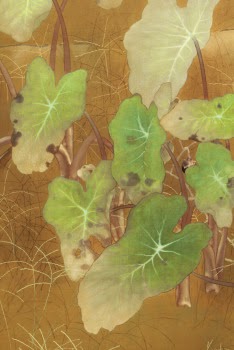 The eggplant produces a type of fruit which is actually a type of berry and toward the lower right of the image we see some ripe fruit ready to be plucked. Indeed, the ripe fruit depicted becomes an object of desire for the viewer and we therefore can feel some kinship with the hungry crow as it scavenges through this paddy, thus linking us again to this bird. Recognition of the crow’s capacity to exploit nature through its intelligence also, perhaps, can engender a longing in us to find a way to achieve an even greater, deeper or meaningful communion with nature through our specialized cognitive and emotional capacities. 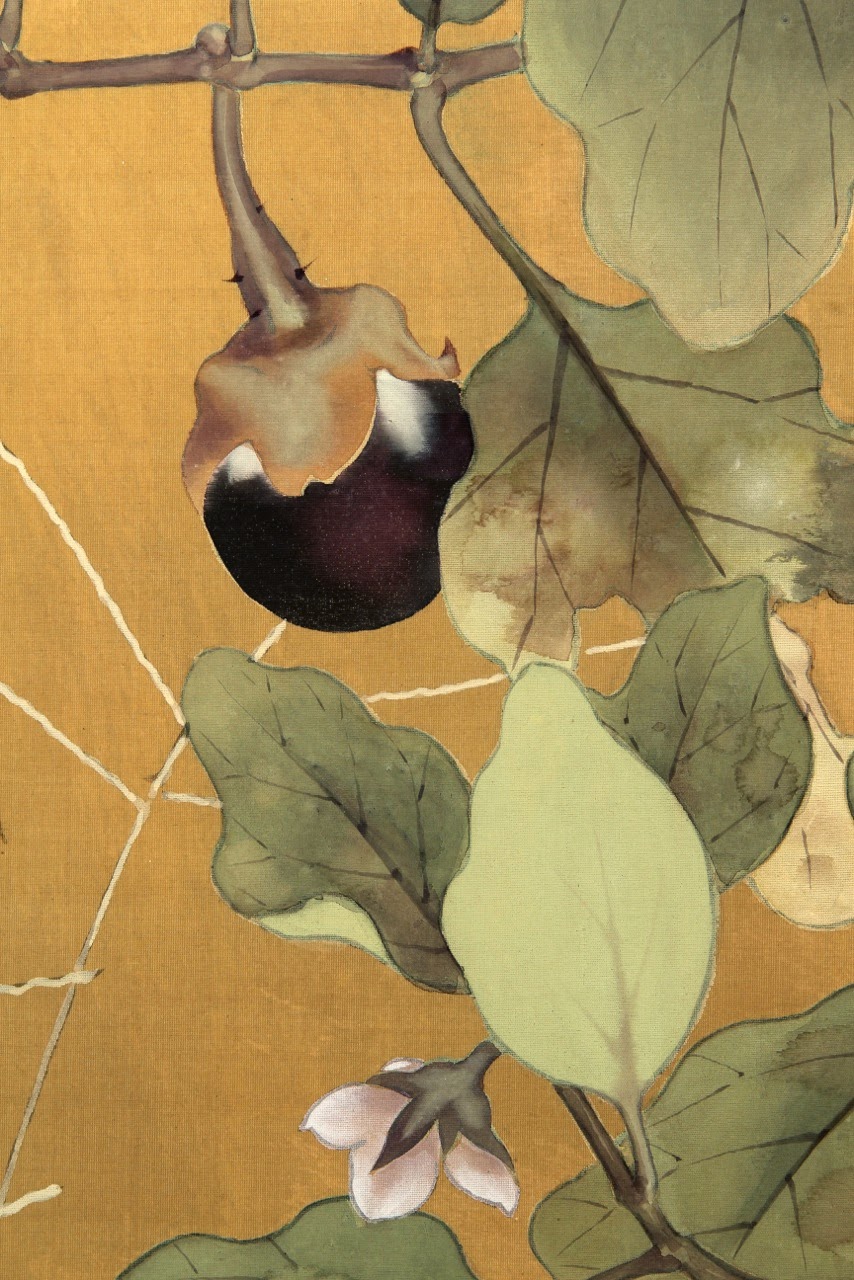 Could this also be a political image? I have not been able to find much information about Shunpo but he did create this amazing work in the 1930s, as Japan was becoming more bellicose and inching closer to war. Perhaps the crow suddenly appearing in a peaceful paddy, partially hidden and partially exposed, represented a sense of apprehension, among some Japanese, as to the direction in which their country was heading.
Posted by Daniel Gauss at 9:34 PM