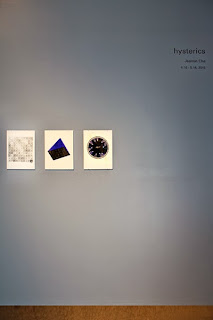 Doosan Gallery is, like many Chelsea galleries, pretty liberal with its free wine on Thursday openings, but on April 16, 2015 there was no wine and the mood was somber. It was the first anniversary of the Sewol tragedy – when a ship overturned off the coast of Korea killing over 300 people, mostly Korean school children. Indeed, on that day of the opening thousands of Koreans took to the streets in Seoul in protest over their perception that justice was not done in regard to the reckless killing of these children. The crew, many of whom acted cowardly, were punished harshly, but the perception to many seems to be that many of the folks who profited from the dangerous illegal construction that put lives in danger to make a few extra bucks, and who, through their callous greed, truly caused the ship to capsize, are or will all be free and clear within a short time. 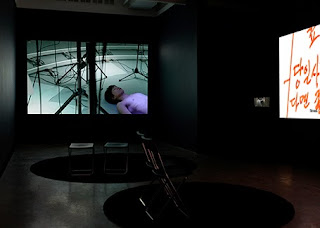 The mood was appropriate for Jeamin Cha’s current show at Doosan – hysterics – comprised of installation pieces and videos. The show covers, in part, the theme of how injustice can eat away at those who are victimized by it due to their acceptance of the pervading belief in every civilized society that justice and fairness are basic human rights. To discover that, despite the rhetoric, justice can and often is easily or casually subverted leads to intense inner crisis for those involved as victims. The centerpiece of the show, for me, is the 9 minute video titled “Autodidact” about Hur Young-chun. In 1984 he learned that his son had died in the South Korean military and he was told that his son had committed suicide. Yet, the details he learned of the story just didn’t add up. This occurred during the military dictatorship of Chun Doo-hwan, who, among other things, seemed responsible for the May 18, 1980 slaughter of students and citizens in Gwangju and who attempted to kill Kim Dae-jung, who would become a future democratically elected Korean president and Nobel Peace Prize winner (in an act of true mercy and forgiveness, Kim would later pardon Chun). 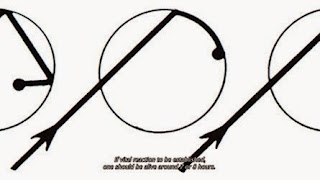 Unable to accept what he felt might be a lie told to him by the Chun Doo-hwan government, Hur taught himself forensic medicine to investigate all of the evidence himself in order to determine exactly what probably had happened to his child. His conclusions, based on the principles of forensic science, are that his son was murdered. Yet, knowing and demonstrating the truth does not necessarily lead to justice. The ruling of suicide was overturned under a more liberal government, but then reversed back to suicide later. Toward the end of this year there will be, apparently, another hearing concerning this matter.  Mr. Hur has thus been pursuing this matter now for over 30 years in what might be considered to be a modern day pursuit of redress tantamount, due to the extreme measures pursued, to that of Michael Kohlhaas in the Kleist short-story, but done within the system, with a father desperately hoping that justice will suddenly appear where it has simply not seemed to appear before. The video shows a father who is driven by his belief in justice in the midst of corruption, his contempt for injustice and his commitment to the memory of his dear son.

Every one of the short videos in the gallery is well worth seeing and I am truly sorry I was not able to get this review up sooner. The show apparently will close on Thursday. If you can get there, give yourself an hour or so to move from video to video and read through the wonderful booklet that Doosan has prepared.