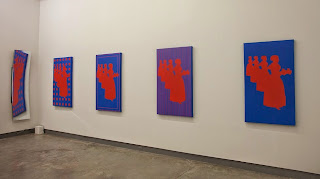 The Droste Effect refers to an image that contains a smaller image of itself, which, in turn, contains an even smaller image ad infinitum.  It comes from a Dutch company called Droste which used this type of recursive imagery on its boxes of cocoa powder. Basically you had a nurse on the cover of the box of cocoa holding a tray which had a box of cocoa with an image of the nurse holding the box on it and so on. 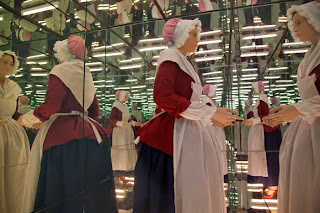 So does the recursion of an image mean anything or is it just some goofy type of “look at the cool thing I can do” exercise?  Well, visual recursion can be akin to Zeno’s paradoxes. Even when the regressive repetition is lost to our vision, we intuit or understand that the repetition can or must continue infinitely. Just because the eye stops perceiving the regression doesn’t mean the regression stops. Therefore the infinite regression of an image rejects the concept that there must be something which would be ‘the smallest thing’. Infinite visual regression implies that we can go infinitely smaller in space. So even though scientists now believe there is a smallest thing (the quark or the electron), the Droste Effect rejects this reality just as Zeno found logical ways to reject the reality of motion. 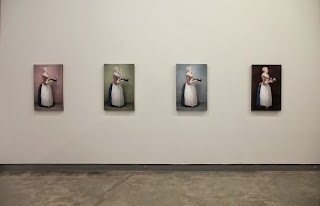 Plato loved this type of thing as a way to imply that there was a deeper unperceived perfect reality and that we could not trust our vision of the world to give us this real reality; but most of us would probably say that Zeno shows we should definitely trust our eyes more than our logic. Despite Zeno’s mathematics we know that Achilles can pass a tortoise. We’ve seen stuff like this. It happens. The Droste Effect tells us there should be no smallest particle. So like Zeno’s paradoxes the Droste Effect points to a capacity we have to create beautiful ideal constructs that are confounded by our more compelling sense of the real world - although Plato would have said it’s the other way around and Zeno’s logic confounds our senses. So something like the Droste effect challenges us to ask what makes us believe what we believe. We have the capacity to imagine a world where motion and substance are lies – are they lies? 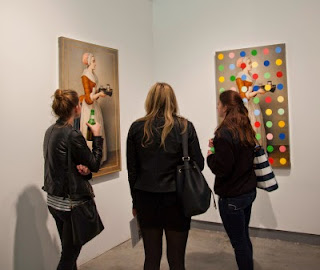 Kolker has been experimenting with the concept of recursion or iteration since 1978. I first became aware of his work when I stumbled upon some of his light sculptures several years ago in Chelsea. I called them ‘infinity boxes’ in my first review of his work and I’m still not sure how Kolker creates them. Apparently he uses at least one one-way mirror along with a small number of other mirrors and LED message screens. He winds up with a very thin box often mounted on a wall which gives the illusion of an infinitely regressing geometrical pattern.  In one of his shows he had a few of these boxes lying flat so that looking down into one gave one the impression of an infinite tunnel heading straight down. The beauty of these boxes is that when the recursion of the geometrical figures becomes lost to our sight, it is sometimes replaced by a deep blackness so that the infinite appears to transition at some point into a type of void. 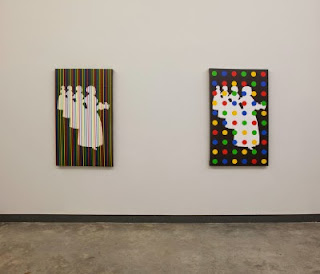 For this current show Kolker refers back to the bashert or coincidence or maybe even providence of the origin of his interest in regressive mirror images, in 1978, coinciding with the purchase of a painting by Rowland Holyoake (1835-1889) called La Belle Chocolatiere.  It turns out that this La Belle Chocolatiere was a painting based on a painting by Swiss painter Jean Etienne Liotard (1702-1789) also called La Belle Chocolatiere. It was, in fact, this image which served as the inspiration for the Droste nurse in the famous advertising campaign. So as Kolker was beginning down the road of experimentation with the Droste Effect, he had inadvertently purchased the Droste girl herself, the inspiration for the most commercially famous example of the type of visual recursion he would experiment with for the next few decades. 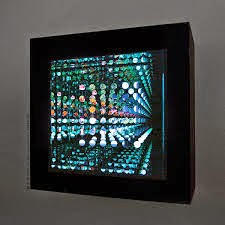 So Kolker uses Holyoake’s Droste girl in pieces that also examine the extent to which we can trust our perception of the visual. We see, for instance, many dots and lines – the dots, I am guessing (and I might be wrong), might represent the pixelated nature of the visual image which now constitutes the basis of our construction of social reality, while the lines represent the scan lines that made images on TV possible. For an image to be partially obscured by these dots or lines, to me, means that when viewing the world through our various electronic gadgets we have to be aware of the contrived nature of the images.  Most of our knowledge of the world does not come from direct experience but instead from captured electronic images around which a narrative can be constructed. Electronic dots and waves exist to convince us of narratives. 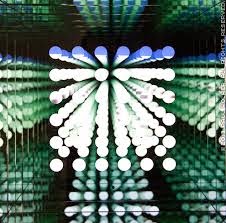 Viewing the dots and lines represents our capacity to question the veracity of the visual image as well as the narrative around it and to become more aware of how readily we can be manipulated through electronic media into forsaking an investigation of our inner realities and responses for a cheap version of what is promised to be outer reality. Indeed, the Droste girl may have been based on a real German chambermaid, but she became a complete fiction created by the Droste company to present chocolate as a wholesome and healthful drink. So Kolker is not just playing with geometric figures or actual objects or recognizable people, but he begins this latest series with a woman whose image was deliberately altered to sell products.