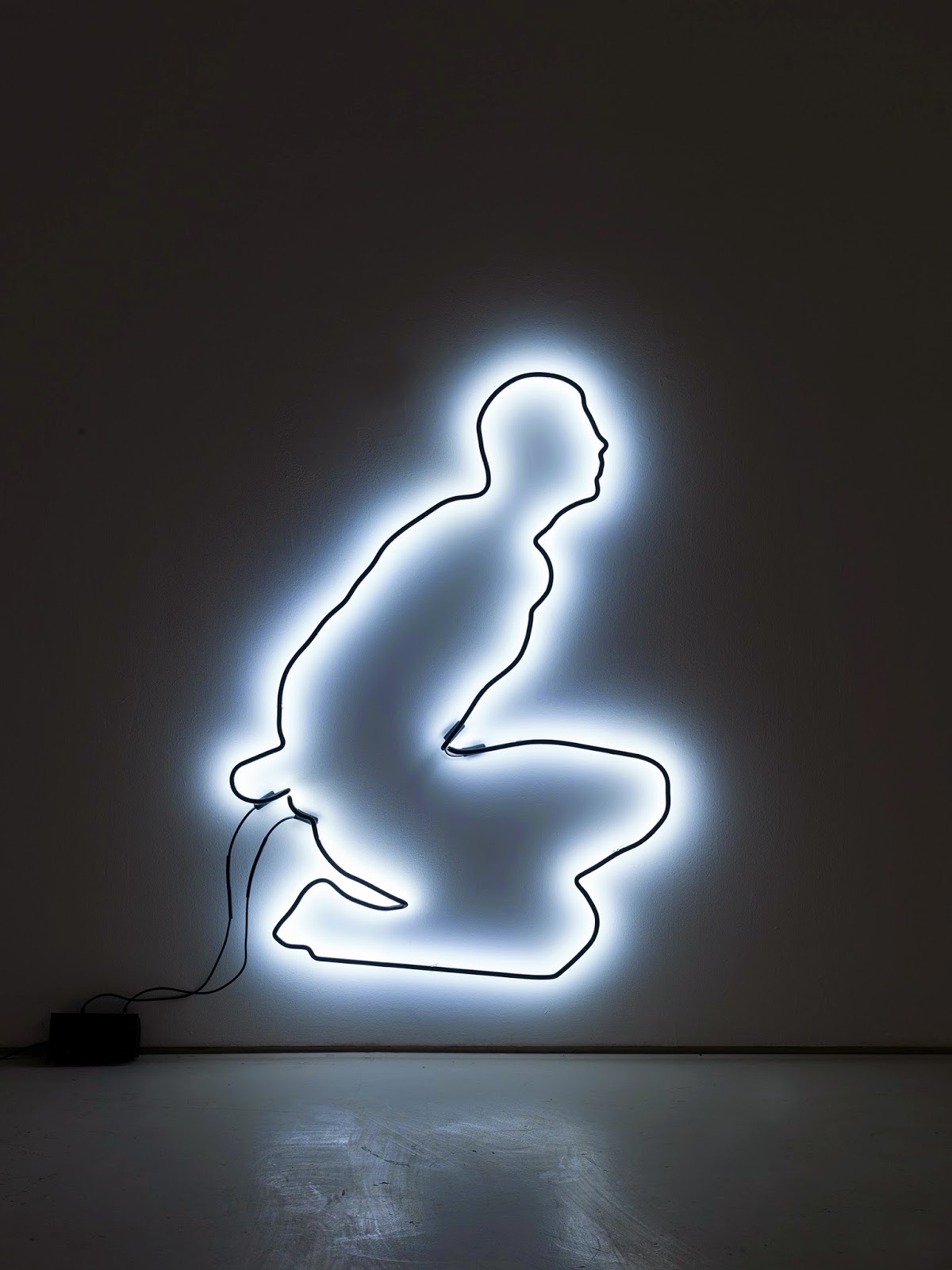 Iranian-born artist Reza Aramesh’s work has not just explored issues of inhumanity, cruelty and suffering (based on images from the popular press), but, to me, has also deeply questioned the extent to which the visual arts have attempted, throughout history, to even acknowledge issues of human suffering. Indeed, in his approach to depicting victims of war he seems to question whether visual art can even adequately address the compelling issues of oppression and horror given the financial basis of the whole field.

Throughout his career Aramesh has regularly taken images from the popular press of individuals who have been captured in war or military occupations and he has ‘decontextualized’ the victims. Basically he removes the victim from the context of his capture – you see the victim alone, in a posture of subjugation, and as the victim is often naked or semi-naked, you are not even aware of the time frame of the capture, abuse and humiliation the prisoner is undergoing. Aramesh also adds a little twist by referencing iconic images of religious suffering in his sculptures. One might be reminded of Bernini, Velasquez, Caravaggio, Reni et al. as one looks at Aramesh’s pieces. He has also employed actors in the past to create types of tableau vivant of prisoners suffering and has staged these ‘actions’ in various highly respected art institutions. 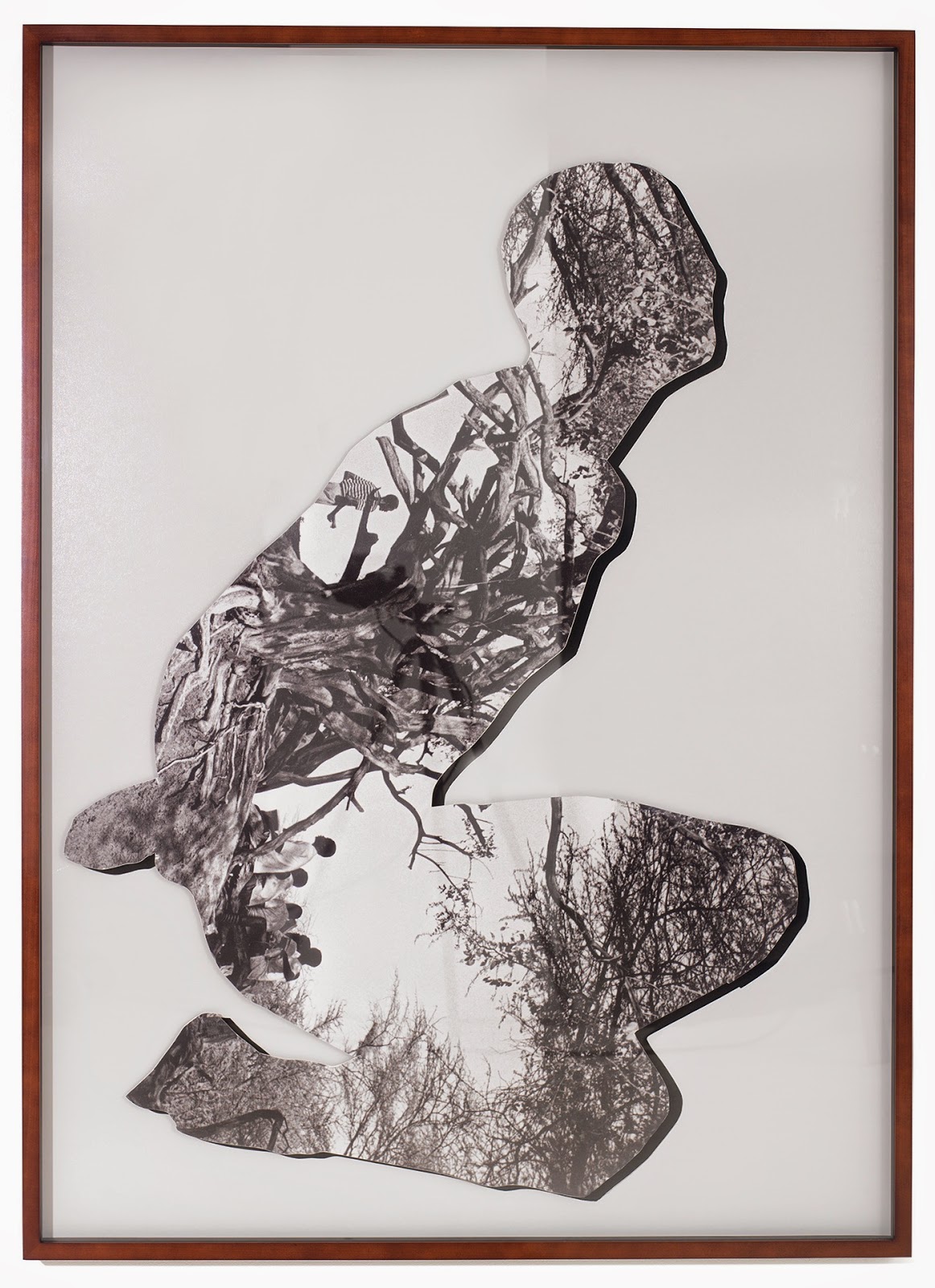 This artist is aware of the fact, obviously, that the only suffering that was depicted in the art of the great masters of the Renaissance and Baroque eras was the suffering of Jesus, martyrs, souls in hell or mythological figures (like Marsyas or Proserpina).  Suffering due to military conflict or social oppression seems utterly absent from the visual arts until after the French Revolution. Even after the French Revolution, when artists could choose their own subject matter, they had to rely on what might sell in the marketplace, and suffering doesn’t tend to sell. Aramesh therefore references the stylized suffering depicted by the great masters in subtle ways in his Action series, where contemporary images of cruelty are blended with previous artistic depictions of ‘noble’ and higher suffering – more commercial suffering. 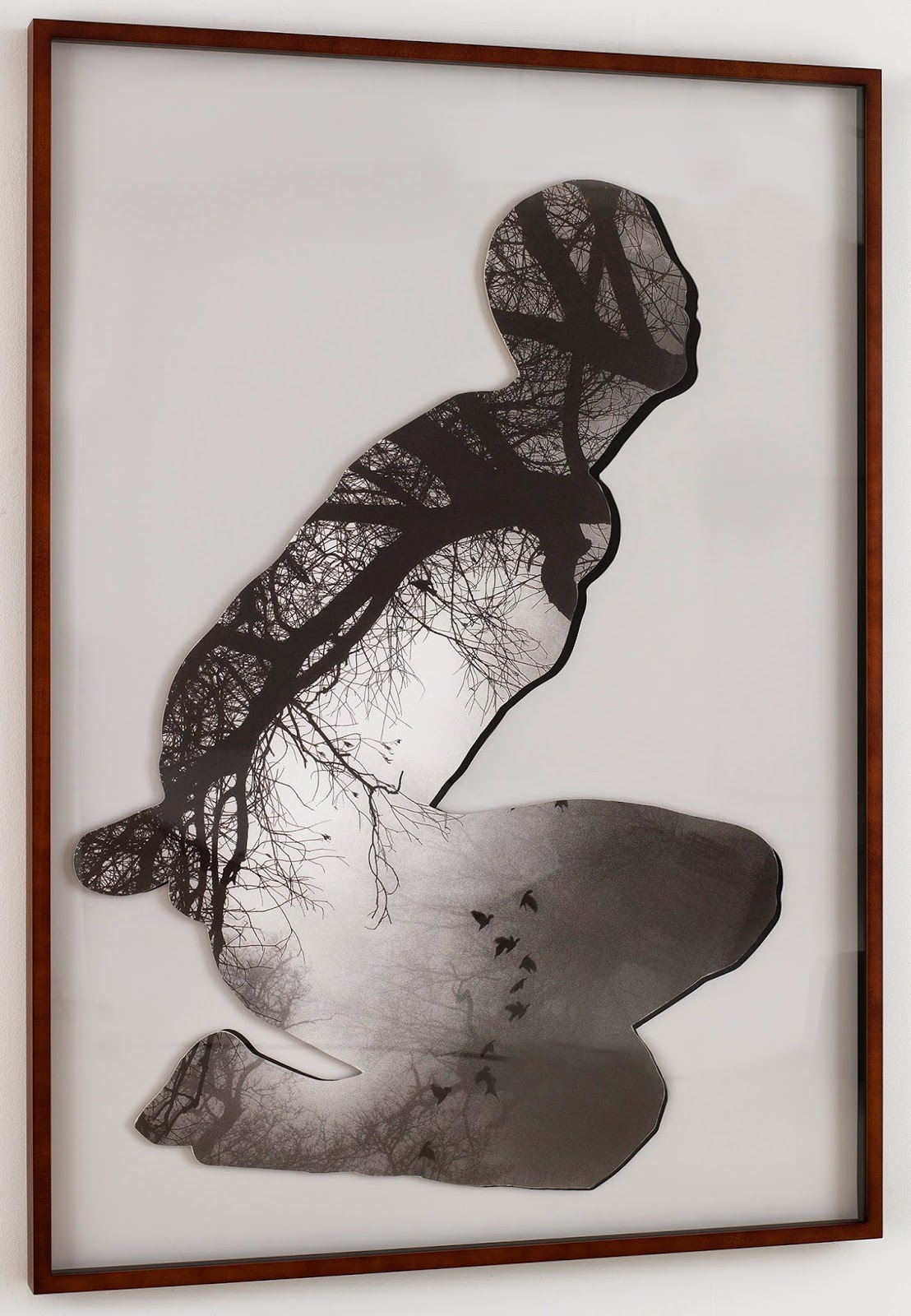 So when, in art history, we see Jesus or a saint suffering, the goal is not to engender a sense of outrage or fellow feeling. The goal is to instill admiration or veneration for the ‘other’ morally superior person who refused compromise and who made a sacrifice for you, one you’ll never be expected to make. The suffering is often stylized and even sexy.  Mishima, the 20th century Japanese writer, discovered his latent homosexuality when he saw a copy of Guido Reni’s Saint Sebastian. Mishima admits in an autobiographical work that he had an involuntary orgasm upon seeing this piece which has often been said to harbor a deeper sexual meaning.  The history of art has not encouraged us to connect with victims of torture and abuse but to masturbate to them. We become Casanova and the Marquis de Sade watching the execution of Robert-François Damiens from our hotel terraces. Unless you stylize and sexualize suffering, it is unsellable. The suffering depicted by the old masters is revealed to be absurd or ridiculous in light of Aramesh’s works, where the victims are not suffering for us, but are just hapless, random victims chosen to be objects of rage and ideological or racial hatred. 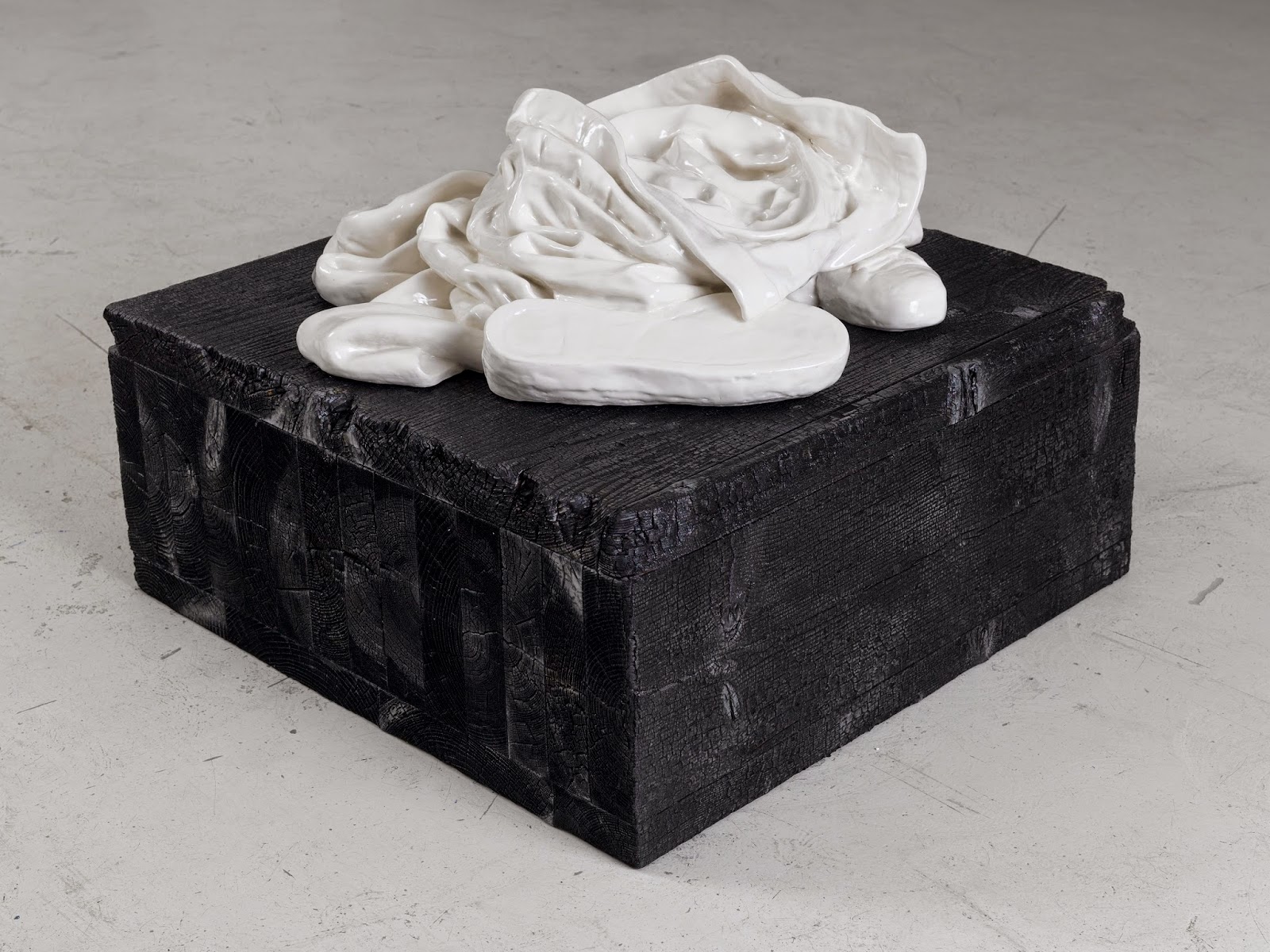 An implication of Aramesh’s work could, therefore, be that artists who choose to buck the market and depict social suffering, basically, have to reject the history of art. So the real value of Aramesh’s work, in my opinion, is that he wants us to move beyond veneration, pity and compassion. He wants us to move beyond viewing those who suffer as ‘others’ and to attempt a deeper connection and examination of how we respond emotionally to a helpless victim. How has art taught us to engage suffering? Allegorically.  Art has trained us to accept suffering as a noble calling, not reject suffering as a form of brutal abuse by militarily stronger nations.

In his show at Leila Heller Gallery, Aramesh makes his usual figure of submission more abstract although the figure in the kneeling position is still removed from all context. By removing the context for the submissive posture we are directly engaged by someone in this position – engaged by the position itself.  By doing this Reza removes any possible legal or military justification for the position. We are engaged in a type of disgust and sympathy for the individual who has been compelled to endure this situation. With no context there is no justification and we become aware of a process whereby human degradation stands alone as categorically morally wrong. It’s as if Reza rejects the explanations and the lack of context gives the pieces greater power. Context subsumes direct engagement – it forces one to tell a story of what’s happening, which leads to a sense of moral justification or condemnation. Instead of an excuse or indictment of war, we are brought closer to the experience of suffering and the vulnerable humanity of the victims. But, without context, there is also no perceivable way to relieve the suffering which is perceived. 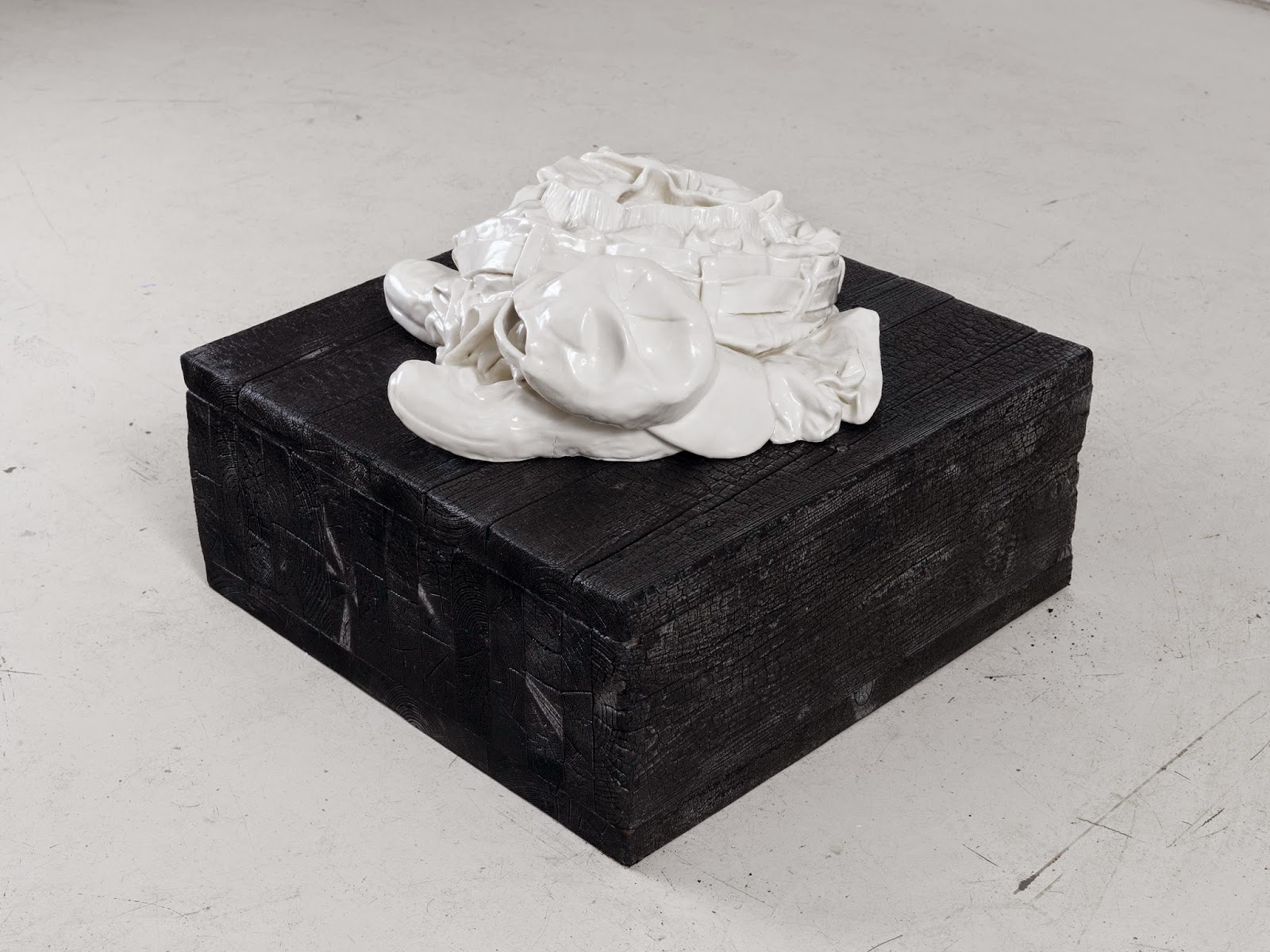 Of course, an irony is that a figure in a posture of submission becomes quickly allegorized as well. He is like Lucky from Godot. He is the inner aspect of our nature we expect to be dominant and liberating but which is inexplicably subjugated to the irrational, aggressive and malicious. Indeed, I think Aramesh might be trying to present his prisoner figures in a more symbolic or allegorical light in this show as we often just see a silhouette of the suffering prisoner, often filled in with found images and objects. Included in the show are porcelain pieces representing bundles of clothes representing the process of stripping prisoners naked as part of the process of breaking them psychologically. The title of the show comes from the fact that on Friday April 25, 2003 at 7:05AM, two Norwegian journalists witnessed American soldiers leading 4 naked Iraqi men through the city of Bagdad simply as an exercise in dominance and humiliation. It was, basically, Pozzo and Lucky in literal form. Yet, here again, in the presentation of discarded clothing, we see a reference to Christian suffering – in the 10th station of the Catholic Via Dolorosa Christ is stripped of his clothing. The difference is that we are not as distant from the Iraqis stripped of their clothing as we are from Christ.