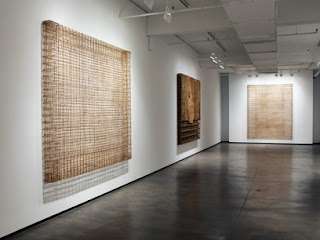 As Sopheap Pich explained to a group of art students from his alma mater (Massachusetts/Amherst) a couple years ago, the last thing on his mind is infusing his work with any sense of meaning. In lieu of conveying or expressing something, Pich creates with a sense of freedom, absorbed in a process he finds fulfilling, using materials from his native Cambodia he is attracted to. This approach, in fact, forces the viewer of Pich’s pieces to examine the legitimacy of his/her own expectations, in general, for an artist, as well as the artist’s work. 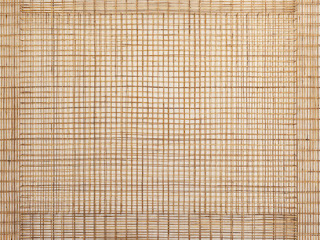 ich was born in Cambodia in 1971, the year after Nixon and Kissinger’s ‘sideshow’ bombing and invasion of that country (during the Vietnam War), which lead to civil war and the ultimate triumph of the Khmer Rouge. After Vietnam defeated the horrifically cruel Khmer Rouge government in a two-week-long war in 1978/79, and occupied Cambodia, Pich’s family was able to make its way as refugees to the US and relocated in Amherst, Massachusetts. After receiving degrees from Massachusetts and the Art Institute of Chicago, Pich (who had always missed the country he had known as a child) chose to return to Cambodia in the early 2000s, almost immediately after another Cambodian civil war, and has maintained his studio there since that time.

Pich primarily uses rattan and bamboo in his sculpture. As a child he was taught how to make grid-patterned fish traps by his father out of bamboo and, like bamboo, rattan is easily accessible throughout the country and has been used in Cambodia for ages. He ultimately returned to using these materials, however, by chance. For a gallery show in the early 2000s, he had bought easily obtainable rattan to create the structure of a pair of lungs he was going to cover with empty cigarette wrappers he had collected for this purpose (he had been smoking heavily at this point in his life). When someone involved in the show saw, however, the bare rattan sculpture, he encouraged Pich to forego the easy social commentary involved in plastering it with the empty cigarette packs and to just go with the grid-patterned or structured rattan lungs – which made quite an impact on viewers of the show. 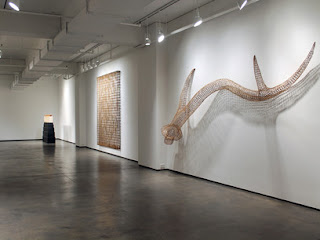 Before turning to art Pich had, in fact, been a pre-med major and liked the shapes of the non-expressive, ‘anonymous’ internal organs of the human body and began to continue in this direction with his sculpture. Indeed, the direction that Pich has been going with his art seems to be highly intuitive and based on what he likes and what feels good to him. He began working with different types of soils, for instance, because he liked the smell. He relishes spending hours at a time wrapping wire around bamboo and rattan to create his sculptures (which have evolved from organic, biomorphic forms to, essentially, flatter grids) – the process of work seems to be soothing and almost therapeutic to him. At a talk at the Metropolitan Museum in New York, where his work was featured recently, he said the hours of work he pours into a piece allows an ‘…escape from the horrible nonsense around me’. 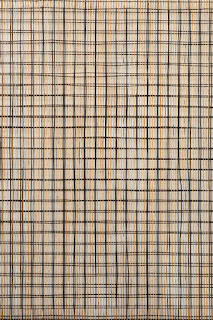 At Massachusetts he jokingly said: “I want to make work that I don’t have to explain.” He does not approach a work with a fixed meaning and, in fact, works to take meaning out of his art, yet he realizes that his pieces do communicate to others and that the work itself will often tell what it means. Pich states that, more than anything, he seeks freedom in the artistic process, allowing the work to sometimes lead him, trusting in the accidental and unexpected. He is not in total control but he is connected and often brought to another level of understanding. 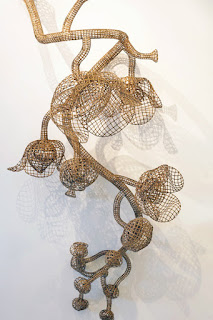 Knowing that the artist is not putting meaning into his work has an effect, of course, on how we approach his work. It makes us keenly aware of the interpretive process we continually bring with us to galleries and museums. We realize more precisely what we believe ‘meaning’ is or can be in a piece of art and we have to wonder whether this is sufficient or truly meaningful. It’s a new twist on what Duchamp and Cage were doing, I’m guessing, with ready-mades and chance-operations pieces. In both cases Duchamp and Cage were saying we can derive a ‘symbolic’ interpretation from almost anything and we seem to love doing this - put a snow shovel in an art gallery and it’s no longer a snow shovel, it’s now an analog or metaphor for something inside us.

So Pich puts no meaning into pieces, he just surrenders to the process of creation, but we come in looking for a meaning. We then begin to sense the inherent limitations of art along with its benefits. To what extent is art merely a form of (relatively empty) cognition and to what extent does it or can it reach emotion, motivation, or become truly transformative? Before we begin to engage any of Pich’s pieces, we have to question the process of engagement itself, and this allows for a more transparent understanding of any meaning in the pieces along with the value of that meaning. 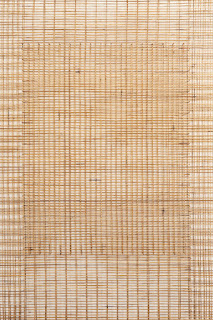 Pich readily admits that the material he uses is already infused with meaning – and at the Met he seemed to admit that given Cambodia’s tragic history many will, perforce, respond emotionally to his pieces based on the horrors they are of aware of in recent Cambodian history.  Another level of meaning involves the fact that we have a guy who went from using bamboo as a child to make ‘useful’ and effective fish traps, who then came to America and was introduced to modern and contemporary art, and who now uses, basically, the technique he learned from his father to make ‘useless’ (as Duchamp would define the ‘useless’ as a necessary part of an artistic piece) grids. This would seem to mirror, in microcosm, the move from the useful to useless that provides the essence of Western art, only Pich has removed meaning from this move.


If we look for conventional or personal meaning in the pieces at this show at Tyler Rollins Gallery, the big question would seem to be what a bamboo grid would represent (although there are pieces that are not grids and some of the grids are double and separated by burlap and encaustic etc.). To me a grid is an attempt at an objective point of reference through which one can track movement or compare movement. It is an artificial construction or tool to discern difference or change. It is also a restrictive structure constructed by following the same rule repetitively.

So I enjoyed thinking of Pich’s grid-pieces at Rollins as analogs for my inner reality, that call to light my internal cognitive ‘constructions’ employed to track emotional responses to the world and others and to maybe chart potential new and more humane responses. By doubling the grids, and separating them by burlap from rice sacks, this could reference quantum type jumps in our inner perception (just musing now – your guess is as good as mine). Why bamboo grids? Perhaps this implies that the cognitive tricks and structures I might employ now have existed through the generations and derive, themselves, from nature, to aid us in our pursuit back to a more sustainable relationship with the natural world through introspection and commitment to an innate integrity.
Posted by Daniel Gauss at 8:35 AM