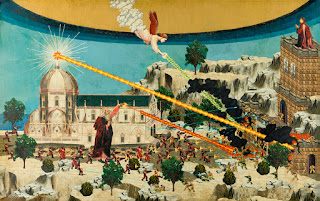 While Dan Hernandez was standing in front of the Leonardo Annunciation a few years ago at the Uffizi, he recognized similarities between the painting and the classic arcade game Street Fighter II. Leonardo has the Archangel Gabriel leaning in toward the Virgin with a stylized hand gesture indicating a greeting or blessing while the Virgin seems to be pulling back into a type of defensive posture. The placement of the two characters to the left and right of a vanishing point in aggressive and defensive postures is, in fact, mirrored by the placement of characters in Street Fighter II. Thus Hernandez began his Annunciation Fighter project, which has evolved into the Genesis series he has been showing at the Kim Foster Gallery in Manhattan’s Chelsea district.

Although the current show in the series is called Genesis 2015, his work draws from many different systems and games - Genesis, as Hernandez explained to me, was chosen as a term because it “straddles the old and the new.” He seems to be interested in combining aspects of these games into early Renaissance masters like Giotto, Duccio and Pierro, but he is also interested in “…the sheer density of information in some of the work by Tintoretto, Bosch and Bruegel, illuminated manuscripts, Indian miniatures…the list goes on and on”. 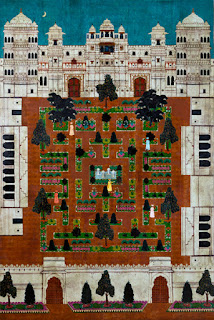 In some of his pieces you see various saints, angels and perhaps even God ‘Himself’ participating in virtual carnage against legions of adversaries.  Indeed the legions are often differentiated from each other by the giant iconic figures among them, goading and inspiring them to greater and greater glory, and sometimes zapping guys themselves with fearsome laser beams coming from eyes, hands or, potentially, wherever. Sometimes the spiritual warriors are marshalled behind inspiring iconic figures or just organized into potential battle legions waiting to suppress the infidel or maybe even members of one’s own religion who simply live across a border.

Hernandez informed me that he is not necessarily making a statement concerning any particular current political situation and that his pieces are more about the “toy box than the battle field.” He’s “playing at violence” as his children do and that this “runs deeper than current events.” Hernandez points to an early piece by Philip Guston of children play-fighting with garbage can lids as shields and small planks of wood as swords as a reference. 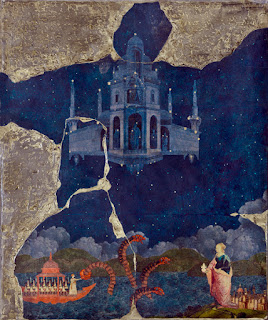 Yet, Hernandez’s work also can serve to satirize the use of religions of ‘peace’ being used as means to marshal armies (throughout history) and his work can also ask to what extent religion is a motivator in conflict or just a banner used to justify conflict being pursued under ulterior motives. There’s also the absurdity of individual cultures going to war just to, basically, destroy the other culture’s religious icons and bury their stories, even though the warring cultures may have icons and texts that, basically, espouse the same principles. Armies have fought to preserve icons and stories. Whose religious meme will, ultimately, survive all this carnage, since it doesn’t seem possible for differing religious memes to coexist?

Deeper to me, however, than Hernandez’s toy box analogy is the fact that his work can also potentially parody the concept of the individual spiritual ‘journey’.  We seem to enjoy thinking of our spiritual ‘quests’ in terms of violent allegories – there is something corrupting or evil inside of us, and this must be rooted out and obliterated. The goal of every religious quest seems to be the attainment of a higher level peace or equanimity, but to attain this equanimity we have to, paradoxically, fight against an adversary the way you zap guys in video games. Of course, once you establish your state of spiritual perfection, as Hernandez shows, you need an army to protect you and your methodology from the other guy’s spiritual perfection and methodology. 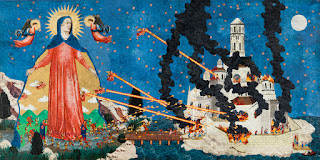