Art Brut in America: The Incursion of Jean Dubuffet 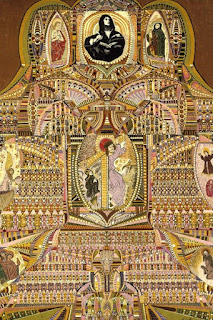 “Other artists identified with da Vinci or Michelangelo, in my head I had the names Wölfli and Muller...It was these artists whom I loved and admired. I was never influenced directly by Art Brut. I was influenced by the freedom, the liberty, which helped me very much.”  Jean Dubuffet

It was Hans Prinzhorn’s 1922 book Bildnerei des Geisteskranken (Artistry of the Mentally Ill) which blew Dubuffet away and turned him onto what he would later characterize as Art Brut.  It was not so much what Prinzhorn had written – Dubuffet could not read German – it was the imagery itself which opened Dubuffet’s eyes to the limits inherent in what he called l’art culturel (official art) “…the activity of a very specific clan of career intellectuals.” He would begin to classify Art Brut pieces as possessing the compelling power of a unique type of expression, free from established cultural trends or influences. 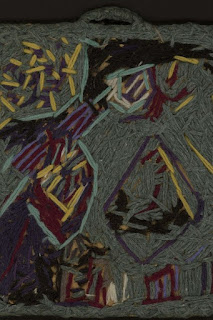 The American Folk Art Museum’s show ‘Art Brut in America: The Incursion of Jean Dubuffet’ commemorates the temporary relocation of Dubuffet’s collection to the US in the 1950s, during a period of time when Dubuffet was trying to find his own way as an artist while simultaneously collecting and promoting work he felt to represent a purer impulse to create than what was found in ordinary gallery pieces – work which entailed a more immediate and compelling engagement between the viewer and the work due to the inherent sincerity of the creator of the work. 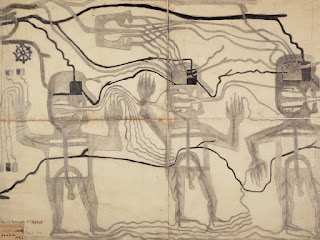 The extent to which one can be engaged by these works and derive meaningful interpretations or insights from them is a bit ironic in that leafing through the bios of the artists at the show one reads that some of these artists, who had been institutionalized, surreptitiously created their work, apparently afraid to be caught for some reason or another. Therefore, some, if not much, of this art was created with the belief it would not be seen and had to be hidden away. The implication is that an artist who wants to get to and visually express something of the utmost meaning to him/herself becomes more relevant to others through a sense of urgency and desperate need to express. 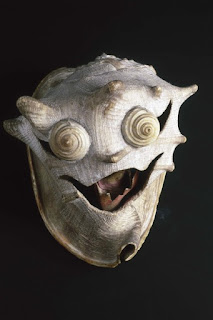 Indeed, it was not the ‘insanity’ or lack of formal education or outsider status that made these pieces remarkable to Dubuffet (there are artists in the collection who were not classified as ‘insane’ and some were formally educated). It was the ability by an individual to create a new visual language from scratch, while ensuring that any viewer would immediately be able to pick up this new language, be affected on a deep level by the image created through the language and treasure this new language beyond the prevailing dead languages of art. It was not about individuals selecting from aspects of the canon to express what they understood – it was about deliberate ignorance of the canon so that something original and true to the artist’s own experience and insight could come out. 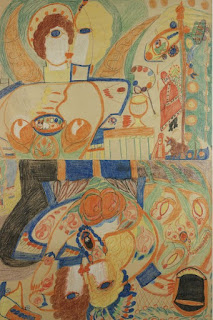 In his famous speech in Chicago in 1951, Dubuffet predicted “…a complete liquidation of all the ways of thinking whose sum constituted what has been called humanism and has been fundamental for our culture since the Renaissance…”.  Art Brut represented a shift in values from what had become established through various forms of corruption and educational/cultural coercion to what had been held in contempt but which possessed greater integrity and intuition. The need for this shift would still seem to be the case today. 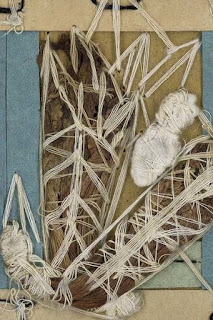 While I wandered through the exhibit, reading of the lives of the creators of the pieces, I was deeply affected by the ‘brut’ (unrefined, uncontrived) and urgent humanity contained in many of the works and I was grateful for the effort put forth by these amazing souls. Having spent the past couple of years dealing with some of the self-absorbed, overly ambitious, and continually self-promoting artists, ‘critics’ and gallery owners in New York, and learning of the corruption inherent in this business of quid pro quo and artificial inflation of prices and the promotion of the talentless over the talented for ulterior reasons through the established press and other means, I left the museum and said a quick prayer to St. Catharine of Bologna for at least a liquidation of all this crassness  – may it come sooner than later. The show closed on the 10th... 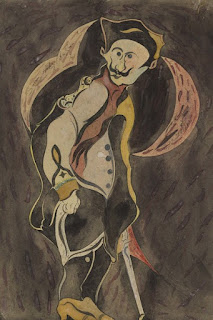