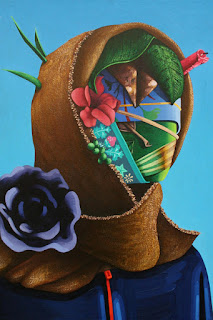 The French have a concept called 'professional deformation' (deformation professionnelle), which is actually a sarcastic play on words based on the concept of professional training (formation professionnelle). In essence, they say that any profession changes a person if he/she works at it long enough, so that, after a while, everyone in that profession seems to look and act like everyone else in that profession.  Every profession ‘deforms’, alters or limits a person’s perspective on the world as well as his/her manner of acting within the world. At the Memphis College of Art, John Harlan Norris seems to play with this concept in his show called Cons and Pros, possibly questioning the overreliance on professional development to the neglect of the development of more humane values in our society. 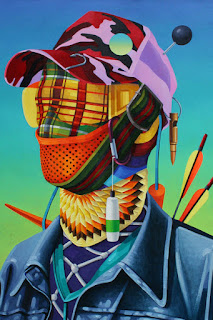 In the mid-to-late 19th century, in fact, a type of occupational portraiture was all the rage in America after the invention of the daguerreotype. Blacksmith, carpenter, cooper, drover…folks who had developed specialized skills were eager to be photographed with the tools of their trade. These daguerrotypes show no psychological insight into the sitters since that was not the point – the point was to document this person’s attainment of a niche in the social structure through his/her mastery of a skill set. The facial expressions are nearly the same in numerous cases, sometimes showing over-the-top solemnity, sometimes self-satisfied pride, sometimes just an empty stare into the camera by a person surrounded by the stuff of his/her profession. 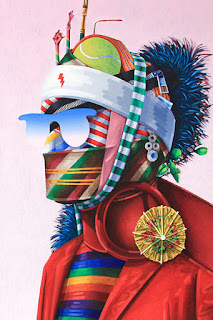 Norris seems to use this as his inspiration for a contemporary take on the desire to be defined by one’s profession and how this solemn pride in professional attainment can mask and trap the humane development which becomes lost or unattained through the consequent deformation professionnelle. In Norris’ work the tools of one’s trade and other ‘visual signifiers’ of one’s profession become this mask and it is stifling and suffocating to the wearer as well as monstrous and oppressive to the viewer. What is meant to be impressive to the world now appears to be highly ridiculous. The obsession with mastering one thing, instead of blossoming in a more universalistic manner, makes these subjects grotesque instead of admirable. 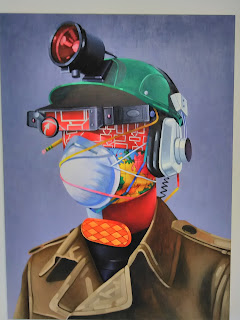 This criticism of one-sided professional achievement is, of course, generally silent in a society where professional deformation is the highly lucrative goal. These practical skill sets are what confer status and, often, self-worth and the valuation of an individual within a society. Yet, concomitantly, compassion, insight, altruism, real charity and various other humane predispositions are not only downplayed but viewed contemptuously. The absurd situation where the more inhumanely deformed you become the more prestigious you become now predominates in our technologically developed society. 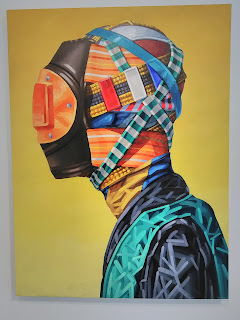 Norris seems to document the Mephistophelean deal everyone is confronted with – cripple your humanity, throw yourself unthinkingly into a profession, master it and gain the world’s riches, power and admiration. (Then, of course, do not be surprised when your only choices for leader of the free world become Donald Trump and Hillary Clinton.) Each of these occupational portraits is a type of portrait of a type of Dorian Gray. They reflect the expectations of our society obtained through our educational system, our mass media, our deformed religions and even our intimate relationships. They call for us to reflect, therefore, on how or even whether it is possible for us to retain a type of humanism in a predatory and competitive economic and social system. 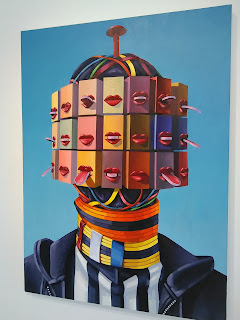 Norris’s exhibit runs through November 8, 2016 at the Memphis College of Art in Memphis, Tennessee. 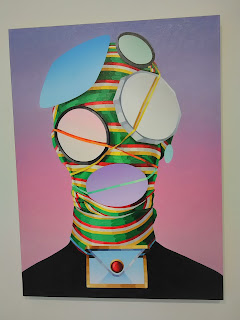 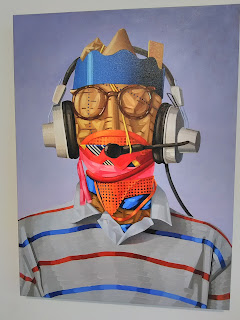 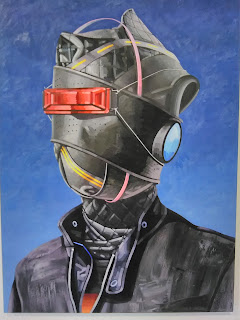 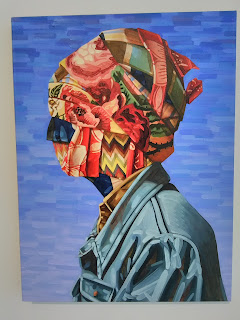 Posted by Daniel Gauss at 12:59 PM No comments: 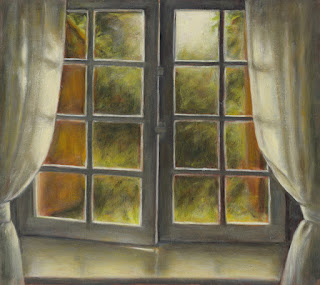 Susan Kraut is a professor at the School of the Art Institute of Chicago, one of the premier art schools in the United States. Her current exhibit at the Addington Gallery, in Chicago’s historic River North district, runs until the end of October.

At their most basic, these paintings possibly could be interpreted as reflections on the relationship between our outer and inner reality. All of our dealings with aspects of the outer world, perhaps, result in attempts to attain to an equanimity or calmness about what we experience or in action to resolve situations into the less painfully provocative. Thus the order, cleanliness and the furniture geared to maximize comfort and acceptance represent the basic (inner) structures with which we receive information about that which is outside of us. The paintings could, therefore, be visual allegories about the integration of the outside world into our inner reality. 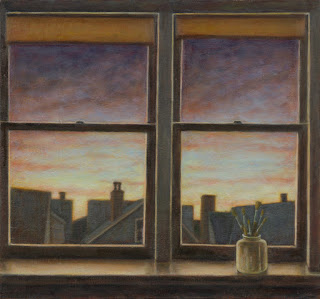 The outside clearly intrudes on the inside often in these paintings, with the same kind of atmospheric foreboding that was first displayed by Giorgione in his Tempest. One implication might be that we have an inherent striving for comfort which controls our cognitive/emotional functions and our actions are guided to this end. There are, however, paintings in the series in which the outer frenzy overwhelms the tranquility of the room. Complicating this simple model further, moreover, is that the integration of the outside into the inside can be construed as being initiated through an illusory process – we sometimes see outer-world patterns reflected from table tops in Kraut’s work, cluing us into the awareness that, basically, everything is reflection. 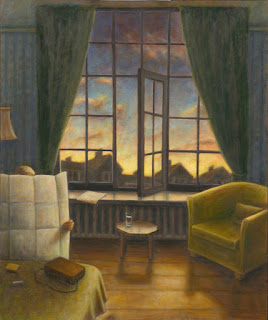 In a Swedish Room

In one of Kraut’s few paintings with a human figure, this interpretation of an outer/inner relationship might gain greater substance as we see a man absorbed in his newspaper with his window wide open to the world. The outside has intruded into his peaceful sanctuary mirrored in the fact that he sits in his comfy chair absorbing it all, half a glass of water nearby representing, perhaps, the only ‘reality’ as presented by Schopenhauer – that of our bodily needs, or, perhaps, more optimistically, our need for inner purification and fulfillment. 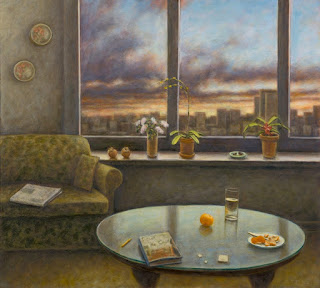 Another interpretation could be that the individual room in these paintings becomes the relative permanence against which biological change can be perceived, felt and mourned. This interpretation resonated with me deeply as I recently returned to Chicago, after many years away, and I live in a house where I had interacted with many loved ones who have departed. These rooms in this house may remain for the next 100 years, far after I have departed, and the current emptiness of them reminds me keenly of my sense of loss as well as of how fleeting my own life has been and will be. Kraut’s paintings, for me, represent the same sense of loss so beautifully expressed by the Polish poet Jan Kochanowski (1530 – 1584) when he wrote of his dead, infant daughter: “This house grows empty now you’ve gone…and there is not one among the many who remain with me who can replace your vanished soul, or free us from the misery of your absent song…” (Translation by Jerzy Peterkiewicz and Burns Singer) 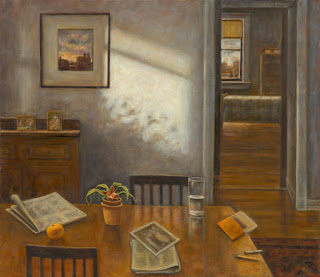 I think this interpretation holds in that many of the interior scenes in these paintings show places that have been recently vacated, papers lying around, uneaten fruit on tables near half-drunk glasses of water…These images could represent loss or the ephemeral – how we flit about these spaces which will exist after we are gone and how these more permanent spaces magnify and lengthen our grief. 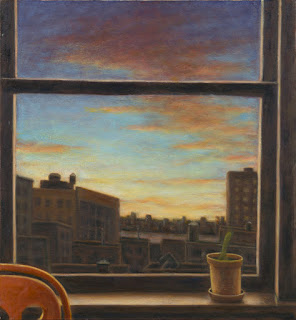 Another focus of this artist is windows, which literally frame the apparently permanent in the outside world but also reveal the permanent as that which changes appearance as lighting and other conditions change, thus revealing that the permanent is merely a concept deduced from reflection (and is, therefore, a reflection of a reflection). 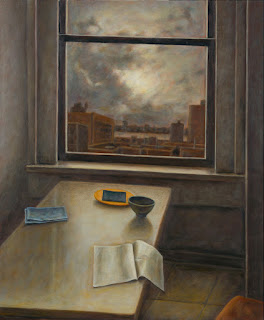 
http://addingtongallery.com/
Posted by Daniel Gauss at 1:15 AM No comments: