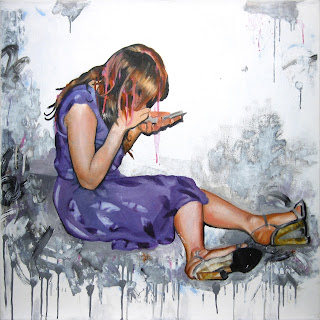 In her show Broken Play, Kirsten Valentine bases her paintings on found or discarded photos which she often buys from antique stores in Chicago. Finding these photos is, therefore, a type of chance event and, as John Cage pointed out, relying on chance operations allows an artist to go beyond the limits of her own imagination and will. It is the artist opening herself up to the unexpected and unprocessed and allowing this to push her forward toward meaningful experimentation and discovery. In Valentine’s case, she is also engaged in a type of cultural reclamation by using these abandoned photos. She is partly in and partly outside of the photorealist tradition in that she relies on the photograph in lieu of subjects, but her paintings are never completely finished and often have elements blurred or obscured. 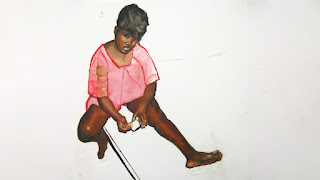 It is important to remember that when many of these photos were taken, film was not cheap. I can recall relatives often exhorting me not to waste film when I was younger and taking frivolous photos of my dogs or goofy friends. It is, however, these photos I now prize more than old images of me standing in front of the Washington Monument or Lincoln Memorial. The only thing seemingly eternal we can experience are memories. They seem eternal because they exist outside of time, have no beginning or end. But they are a personalized, false eternal as the pain they cause will die with us and the joy evoked will die as well. The photo is an object, an imitation of memory, an aid to experience the eternal in our lives. 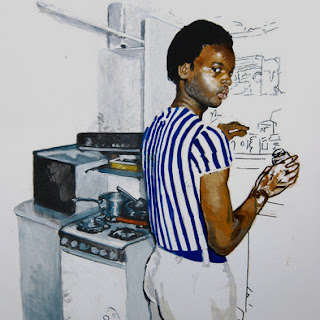 Many of the photos Valentine chooses seem to be from those times when folks were deliberately wasteful and took random silly shots of each other. When Valentine went hunting for photos she seems to have looked for occasions when folks disregarded both the advice of relatives and the cost of film and captured something amusing or endearing or provocative in a spontaneous and impromptu manner. In fact, there is a type of candor in these photos that we can probably no longer get with our digital devices. These folks were defying photographic convention and just doing their own thing and they were not shooting for a wide audience as there was no way to publicly share these photos. In the true spirit of chance operations Valentine is not just looking for one thing in the photos she selects; she seems to wait to be hit by something the sitter is not afraid to show to the intimate acquaintance taking the photo, whether it be a form of interpersonal dominance or extreme vulnerability. 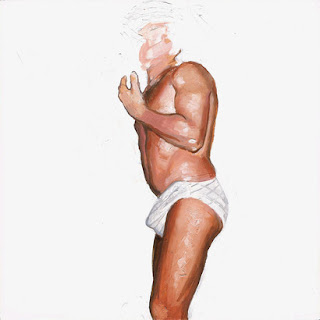 These photographers recognized the importance of this “wastefulness” and Valentine validates their recognition. There can thus be a mixture of pathos and silliness as over the years the event or pose was forgotten, the subjects may have passed away and the photos have gone to antique stores. That instant of mirth was captured but now fills us with melancholy. The photo is an attempt to create the eternal or preserve it. In fact, it is no wonder why people do not merely throw these photos away. They seem to feel there is something sacred or valuable about old photos, so donating them to a total stranger is preferable to the trash heap. In the act of donating the photos the giver must hope that someone can use these photos somehow, that they may be of unpredictable value to someone else. Thus, Valentine and the donor meet half-way and close the loop. She fills their hope that these photos were not useless trash. 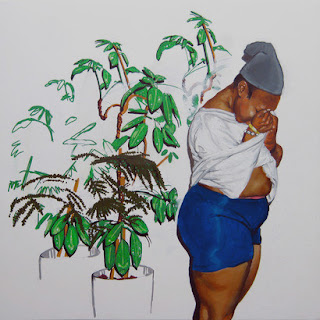 I am not sure we can say, as others have, that her paintings are remnants of a lost narrative. These are remnants of someone’s eternity, like their very bones. When Andy Warhol was shooting film stock of Ondine just being Ondine or Edie Sedgwick just hanging around, was this part of a narrative? No. A person’s life is not a narrative and this is what photos prove. A narrative is contrapuntal to life. 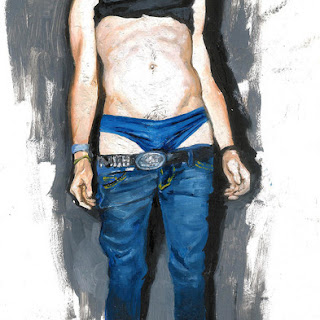 The paintings are often fragments. Valentine sometimes removes identity, to make these experiences universal? To subsume another person’s memory so that we can fully engage in it? Is she trying to make an experience timeless, common, an aspect of a shared human experience that all of us can recognize? More than anything, many of these paintings are about interpersonal spontaneity and trust which we have largely lost in place of planned poses for Instagram accounts. 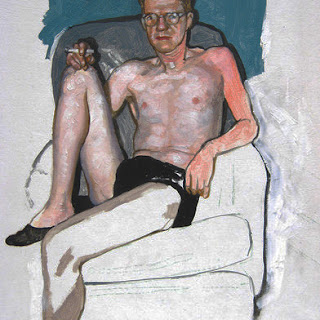 In an interview Valentine pointed out that these strangers remind her of herself and others she knows. These are the strangers on the train we never chatted with but we are now voyeurs delving into their private lives. The privacy of these photos no longer matters and the images can now go wildly public. Perhaps she blurs faces to protect the modesty of the person depicted, who never expected to be displayed in an art gallery, who never thought his or her causal life warranted reflection by others.

Posted by Daniel Gauss at 8:49 AM No comments: