There used to a photography gallery in Chelsea called The Klotz Gallery.  It always had amazing shows and was quite liberal with the free wine on opening nights!

This gallery became a fatality of the changing nature of Chelsea due to the Highline Park and the real estate development going on due to the new park.  Rents are rising and galleries are dying or moving.  Alan Klotz now runs his gallery from the Upper West Side.

The Chelsea gallery district was an incredible resource for this city, but when you have a mayor oblivious to everything except helping his buddies make money, you lose cultural treasures. At one point, maybe 6 or 7 years ago, there were more than 300 art galleries in Chelsea; now there are less than 200 and the number drops each year.

Here are some pieces from a show Klotz had of the work of Robert Richfield.  The show was ironically called Still Life.


In Portugal they often place a coffin inside of a boxlike structure within a larger complex - kind of like this (this structure comes from Mexico, however):

They seal the coffin into the structure, but, in front of the coffin, there is a little area, behind a pane of glass, where family members can leave decorations, flowers, momentos, photos etc. Richfield photographed many of these "windows" at a Portugese cemetery.

For instance, here you see both a reflection from the window and the inner contents in front of the coffin: 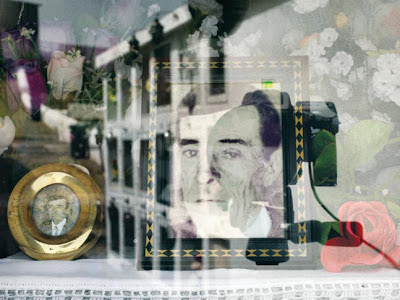 In this photo, we see that some moisture has formed on the inside of the window, partially obscuring the photo and flowers inside. 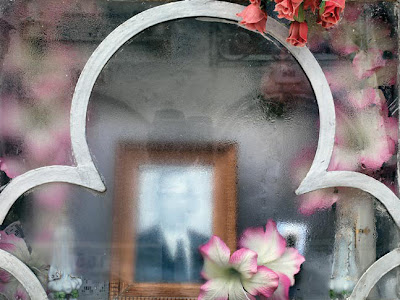 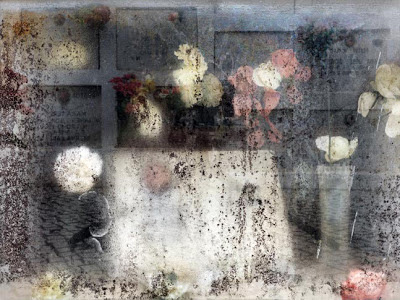 This is a beautiful photo showing outlines of the photos of the deceased person surrounded by blurred images of the flowers left by the family, as well as reflections of surrounding structures. 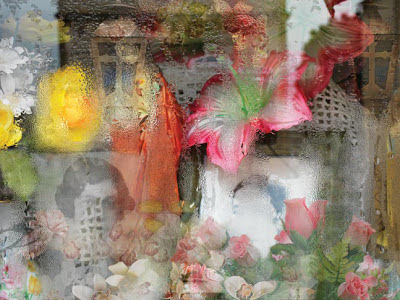 So why did I like this show so much?

Essentially, it was a great idea to take these photos. The photographer created unique images conveying immense love for the deceased and deep mourning.  The combination of the reflections, blurry moisture and the photos of the deceased help evoke the depth and pain of the mourning process.  Interestingly, in some windows you see that the flowers and images are old and neglected, the mourning has passed, perhaps the mourners are even gone.  In other windows you see bright, fresh flowers showing that people are still grieving and feel compelled to tend the place where a loved one has been laid to rest.

You can see more of Richfield's work at www.robert-richfield.com
Posted by Daniel Gauss at 10:03 PM