Saints and Sex, The Granite Sculptues of Oh Chaehyun

I saw some very provocative pieces by Oh Chaehyun, a very well-established sculptor from South Korea, at Able Fine Art in Chelsea.

What was interesting to me was that he uses a very traditional Korean style of sculpture to create images of a religious nature juxtaposed next to images of a sexual nature.  Indeed, he chisels these pieces out of granite.  Sometimes the sexual images seem to be so 'crude' that they are almost shocking.

For instance here we see a woman exposing her vagina while seated between two praying figures.

Here we see the same type of figure surrounded at the cardinal points by 4 Buddha heads.

So I was attracted to this artist's pieces because I felt it was quite thought-provoking to juxtapose images in such a provocative manner.

Is the woman inviting sexual intercourse? Is she about to deliver a child?

Also, there is religious literature in which sexual processes are used to correspond (symbolically/allegorically) to spiritual processes.  In some works of visual art it is even hard to tell whether the sexual or the spiritual is occurring.  Remember this work by Bernini? That's "St." Theresa. 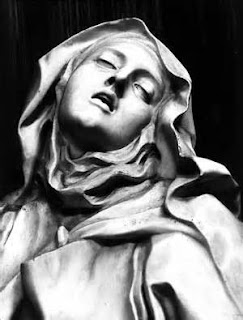 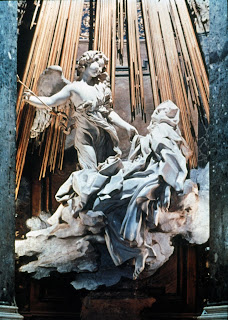 One of my favorite writers from the past is the Japanese novelist Mishima.  In one of his autobiographical novels (Confessions of a Mask) he writes that, as an adolescent, when he saw (in a book) the painting of St. Sebastian being executed, he involuntarily experienced his first orgasm.  Did Guido Reni deliberately add a sexual element to the suffering and helplessness of Sebastian in this painting?  Or did Mishima just read something extra into this work? 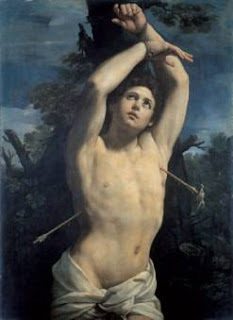 Oh seemed to be implying that we cannot radically divorce the sexual from the spiritual. Indeed, in rural societies, before the rise of cities and religious traditions ideally suited for city-life (like Christianity) the spiritual was not separated from the sexual.

If one looks at ancient Celtic symbolism for instance, one sees this goddess: 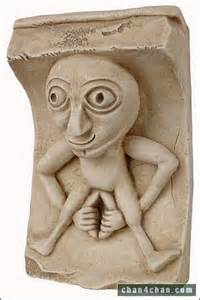 I think that Buddhism, like Christianity, is a religion for the 'city.'  "Pagan" religions were a type of religion that focused on the relationship between people and nature, whereas Christianity and Buddhism seem to focus on the relationship between people and each other.  Pagan cultures accepted sex and even embraced sexual activity in some of their rituals (according to James Frazer).  When people get moved into cities and people become divorced from nature, then sex and spirituality become radically divorced.

This artist is therefore taking a religion that does not overtly deal with sex and he shows how initially out of place its images might seem juxtaposed with sexual images.  Again, he seems to imply that this should not be the case and that it is time for urban religions and spirituality to reconnect with their rural and ancient pagan pasts.
Posted by Daniel Gauss at 12:11 PM