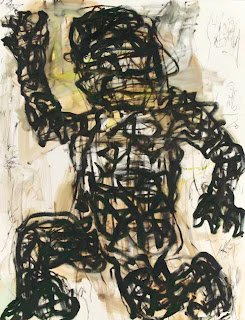 One of the fun aspects of going gallery hopping in New York City is recognizing the various influences of previous art movements on contemporary artists, and seeing how artists take these influences one or more steps farther to convey their own personal insights. The influence of the ‘art brut’ movement is inescapable in the work of Dusty Boynton, who seems to use this influence as a starting point in her personal forms of expression, while also embracing traces of abstract expressionism and even, perhaps, graffiti art.

In the 1940s Jean Dubuffet became fascinated with the art work of mental patients and children, since he felt that this work was more raw, unrefined and genuine than the work of academically trained artists (‘brut’ means: coarse, unrefined, raw). He felt that when these folks created things, they were not concerned about artistic tradition or beauty – they wanted to get to and express something of the utmost meaning to themselves. Indeed, art brut or ‘outsider art’ seems motivated by a sense of urgency and a desperate need to express. The challenge for a contemporary artist, who wants to use this style as a language, is to avoid the obvious artificial visual clichés of this type of expression and to impart her own sense of urgency and meaning into the work.

If we look at a piece like ‘Episode,’ we see that Boynton clearly succeeds. One of the more valuable aspects of art brut is that there can be no doubt that the external image represents an internal state. This movement is influenced, after all, by psychiatric patients who were desperately trying to get at the sources of their psychological conflicts. Art brut and art influenced by art brut is supposed to have a type of therapeutic value. ‘Episode’ is interesting because it not only represents a powerfully evocative image but the graffiti-like style of execution lends a ‘process art’ feel. Jackson Pollock explained that he didn’t want to represent anything, he wanted to express something, and this is why he moved around the canvas instead of remaining stationary. When we look at ‘Episode’ and see the twisted, thick, dark and sometimes fractured lines, we feel the sense of urgency and the need for expression that is required in this style.

The sense of ambiguity and the license the artist gives the viewer to impute his/her own interpretation based on his/her own inner struggles is also well-accomplished. Is this figure dying? Is it rising? Is it showing defiance or is it acquiescing? Is it in pain or experiencing a sense of triumph? Significantly, in this figure we see one hand is directed at the earth while the other is directed at the sky. One knee is planted on the ground while the other is poised to help raise the body. This is a figure experiencing real struggle, in a state of transition, either succumbing to some type of force or conquering it.

There is nothing new under the sun, yet Boynton shows that it is possible to embrace styles and theories of the past and make them timely and relevant, and, indeed, timeless and meaningful. She includes influences in her work like Dubuffet, Basquiat, Twombly and de Kooning to create a sense of earnestness and insistence that draws the viewer into her art and invites deeper and more meaningful introspection. In so doing she has also created her own unique style and artistic language. 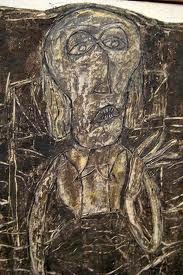 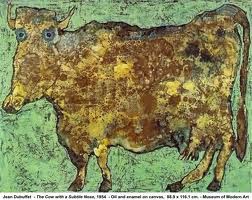 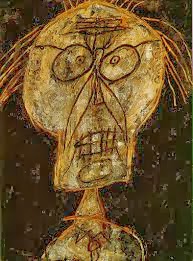