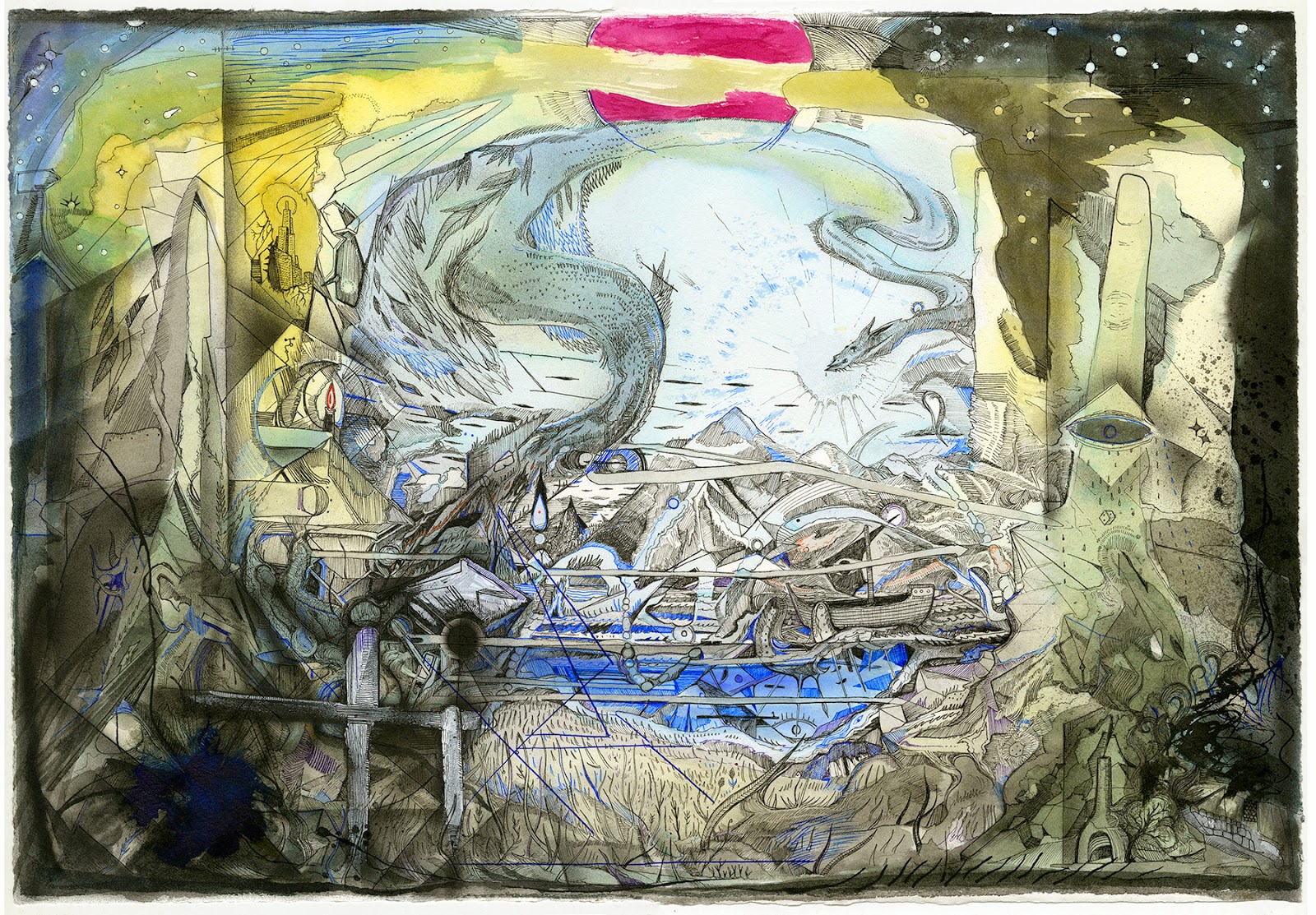 Charles Burchfield, an amazing American artist from the past, once wrote: “An artist must paint not what he sees in nature, but what is there. To do so he must invent symbols, which, if properly used, make his work seem even more real than what is in front of him.” This echoes, to a great extent, Arthur Dove’s belief (acquired from Henri Bergson) that an élan vital pervades nature and this can be discerned and will lead to a greater understanding and engagement of the world than science might provide.  A couple of artists at Freight and Volume – Max Razdow and JJ Manford – follow in this American transcendentalist tradition (Burchfield and Dove are, in fact, listed in the gallery notes as influences on their work).

Indeed, Razdow and Manford were also, apparently, influenced by a group of visual artists from England in the 1800s who formed a type of fraternal society around the vision and work of William Blake.  The group called itself “The Ancients” and, like the Romantics, they looked back on what they perceived to be a better time.  Practical applications of the scientific revolution had lead to the industrial revolution, which was altering natural landscapes as well as relations between people. Science also meant that nature was to be controlled and exploited for profit. Science also replaced the ‘ancient’ belief in transcendence with the belief that what was useful about nature could be grasped with good math skills and this shell of nature would suit our purposes just fine. The ancients believed that a union with nature was possible and this union might even lead to greater acceptance of what underlay perception, which would then lead to greater spiritual development. The mind was not separate from nature but a part of nature to be influenced and changed by nature. 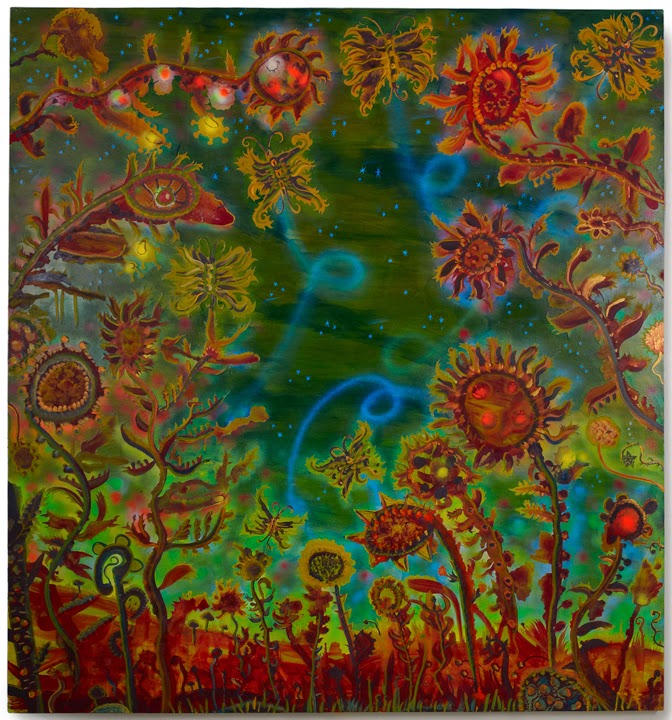 In the work of both Razdow and Manford we see that a direct attempt at a union with nature leads to the types of symbols and visions Burchfield alluded to.  Manford’s work looks like some of the drug-induced paintings I have seen by shamans done for western anthropologists. Yet, Manford, unlike the shaman, is not necessarily claiming to depict  a journey to a spirit realm. This is more of a super-heightened experience that has broken through a type of painful longing into a complete, unmitigated awareness comparable to what Teilhard de Chardin called a universe on fire. 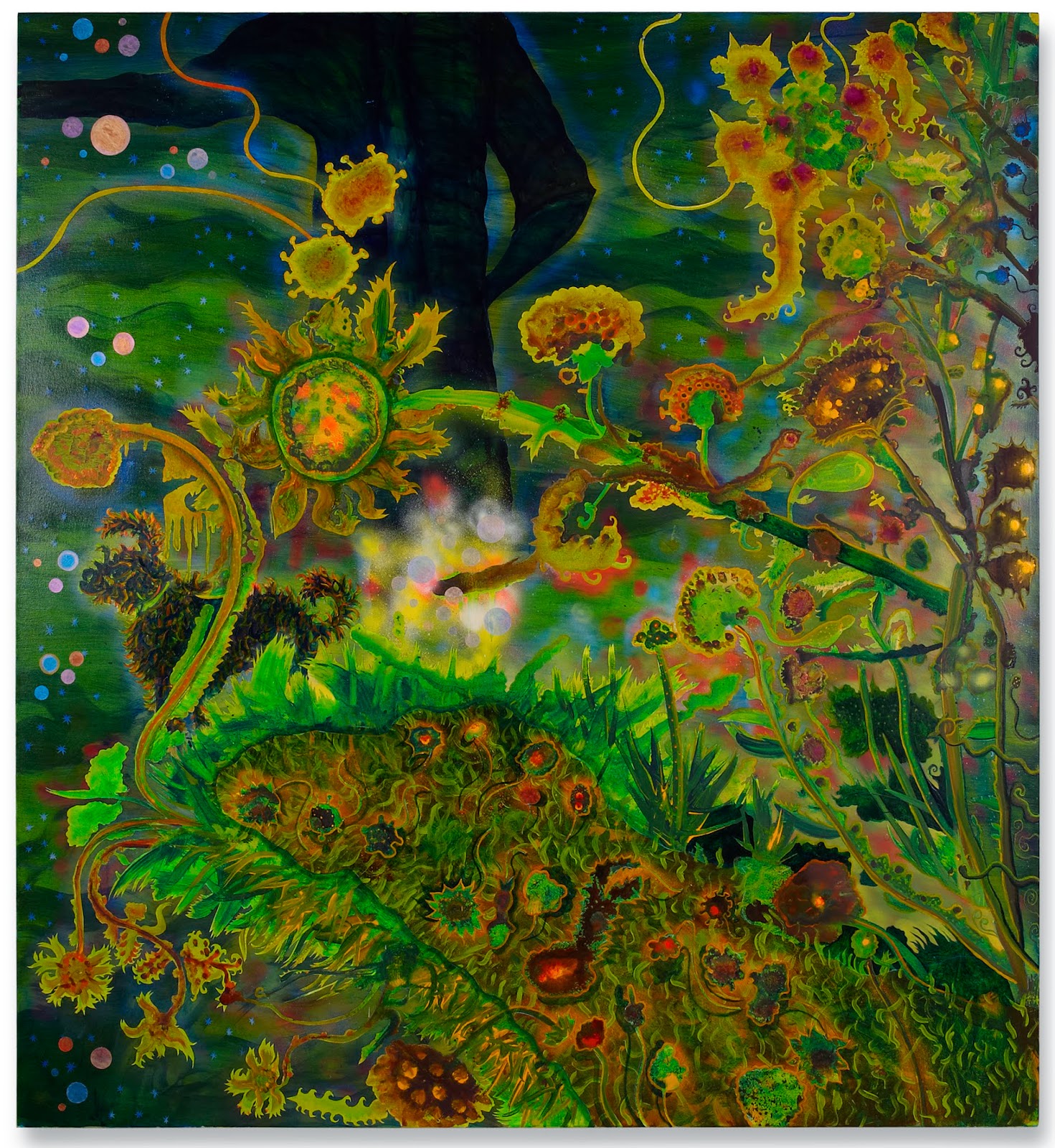 Manford - On the Hill

In the Romantic landscape tradition it was said that English artists favored ‘color’ while Germans favored ‘line’ and this seems to be a big difference between Manford and Razdow’s work. Razdow seems to be more detail oriented and uses ‘line’ to distort perspective and to establish a contrast with more organic forms.  The line seems a remnant of the conscious mind which becomes superseded by the vision born of greater engagement. Razdow also seems to use those tubeworm creatures that live at the bottom of the sea as important symbols in his work.  To me these creatures represent sentient life at the most extreme form of survival mode. If a creature ever should have been named after Schopenhauer, it should have been one of these sea worms. It’s as if the deep plunge into direct and unfiltered nature leads to our confrontation with this creature and a challenge to determine what can elevate us above it. 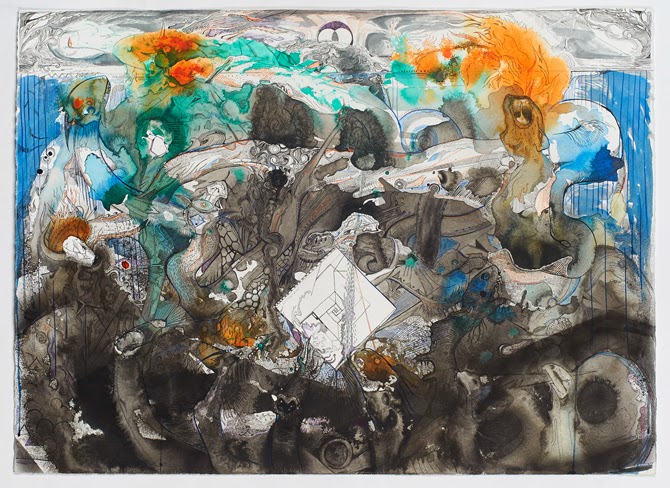 Both artists, coincidentally, use the human figure in an interesting way.  I’m reminded of how Caspar David Friedrich would use silhouettes in his landscapes to, basically, welcome a shared experience between those inside the work and those viewing the work.  Both artists seem to do something similar yet we are not engaging an outer landscape in their work, but a new vision of nature and our possible transformation within it.  The artists seem to assume we will engage the world in a way to make this vision recognizable to ourselves or that we have already done this.